Defrothed with a vacuum chamber today

Frothed the heck out of the juice though. Let it sit for a few minutes and got tired of waiting for it to settle … so … I thought hey why not run it through the vacuum chamber so I can get my SNV on. Worked great. Cleared it right up.

I wonder if it speeds up the :sigh: “steeping” :lol: of it at all. Tastes good none the less.

Maybe next time I’ll do a side by side comparison… or not… Thoughts?

Yes. Is said vacuum chamber store-bought or something you made?

Also, it sounds like an interesting idea as a means of “speed-steeping” without the use of heat. I’d most certainly be interested in a side by side taste test. Maybe mix up a batch, let it sit for a week or so while doing all of the pertinent usual steeping steps-cool, dark place, a shake via hand every day or two. Then mixing the same juice and using the Sawzall to VC method and go side by side in RDA’s of the same chamber size and build? Just spitballing process ideas, as the idea has my brain gears whirring.(I’m under the influence of heavy meds today, so forgive my ramblings)

Maybe next time I’ll do a side by side comparison…

Is it a comercial type vacuum sealer that you used?

Frothing, in my experience does speed the steeping process… It is a thorough way to blend all the ingredients…It took some experiments for me, but a frothed mixture becomes steeped by about 4 to 5 days sooner than simply shaking…

Back when I first started mixing I was looking for all kinds of ways to mix the juice… better and faster. I pulled out my grandpa’s old 1960’s milkshake maker he had given me and turned it on low speed. Well turns out, this thing on low speed is like 50,000 rpms and it literally mixed the shit out of my juice and turned it from a golden yellow color to a milky cream color in a matter of seconds. At first I thought it was a good thing! “Damn I mixed my juice so fast it broke down the atoms and made a whole new compound”. Maybe it wasn’t exactly that extreme but I almost believe it was true! It looked milky for close to a week before it became semi- transparent again. I had made that juice plenty of times and enjoyed it. After the severe mixing though it was off. The flavors were not the same. Maybe the vaccuum thing would have helped bring it back? Is this the froth you guys are talking about?

It’s an industrial vacuum chamber. It was set up for degassing silicone mold making rubber.

Admittedly I’m not a scientist but …
In a nutshell what happens is using a high speed mixer… or in my case… shaker, severely agitates the glycerin introducing very many tiny bubbles making it frothy. Theoretically the heavy agitation helps speed up the combining process of the various ingredients.

Then I put it in a vacuum chamber and the pump pulls out the air.
The tiny bubbles expand and combine making the liquids level rise in the container. When the vacuum gets to around 29.9 hg the liquid “falls” to it’s actual level and is bubble free.

Also… to my understanding, some flavors contain alcohol which may leave a bad taste (why many say letting it breath (evaporate) helps) Well with the vacuum pulling the air through and out of that frothed mix, it seems that it will speed up that process too.
Yeah I’m quite curious… I’ll get around to testing soon

Isn’t oxygen and oxidation essential for steeping? So wouldn’t removing all the air increase steeping time?
I can see why it’s useful in your situation, but I don’t think it’ll enhance the steeping process.

Quite some time ago - @Norseman directed me to a post on another site from Jef Ames - I think he is on the recipe site here but never seen him post on the forum @jef45ames (on recipe site). He mixed identical liquids and kept one under vacuum the entire time including steep time. Thought it was quite interesting - here is the post he made. I will try to drop him a line if anyone is interested in hearing more. 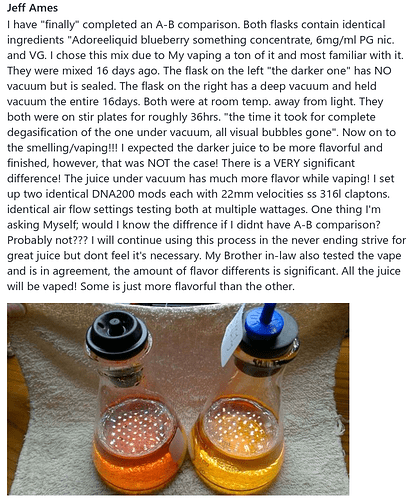 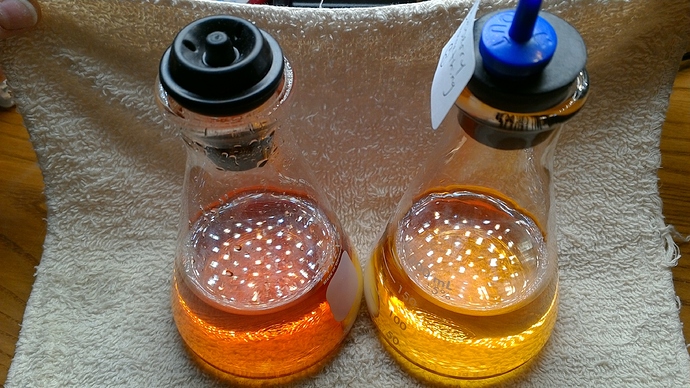 I find this really interesting to say the least. Looking forward to hear more about this from @jef45ames to see how useful this could be.

Hi Guys! Anything I can do to help make delicious DIY goodness. The whole “steeping” is misunderstood. There is so much information, thoughts, and processes that nothing makes sense. Homogenization and degasification is what I’m trying to accomplish and it’s working great! By pulling a vacuum You can boil the alcohol “and others” You might not want in Your mix. I was testing side by side to see if and how much derogation there was to the actual flavor, surprisingly the vacuum was considerably more flavorful.

Good stuff… It seems worth checking into a little bit more. I’ll try and put together something over the next month or so.

Next thing you know companies are going to start making little home vacuum kits so we can all make extra flavorful juice with this process! This could be the next big trend to hit the vape market!

anything someone can spin for a$$ If people catch on to how well this works, someone will make something for sale. Mixing without heat, exposure to oxygen, and light while degasifying? It works for Me!

Hey bro nice to read your opinions on this and also cool to see you post in the forum.
Welcome

Ya know after reading the thread I started thinking about it (scary thought for those that know me). I have a wine vacuum “thingy”. After you open a bottle of wine and if you don’t finish it off, there are these rubber “stoppers” you put in the bottle and a little hand pump that extracts the air inside. Sadly the stoppers fit a wine bottles opening and I really don’t have a smaller container to mix juice in that would have an opening that large.

Oh I would, but I don’t make “THAT” big of batches at a time lol

Do you guys have the little 200ml bottles of wine over there? I think the neck size is a standard size

Actually I don’t know, I’ll have to hit up one of the wine places in the next couple days and see… take a stopper with me, I have a good 4 or 5 of the stoppers (I normally don’t leave a have empty bottle in the fridge or sitting around very long).