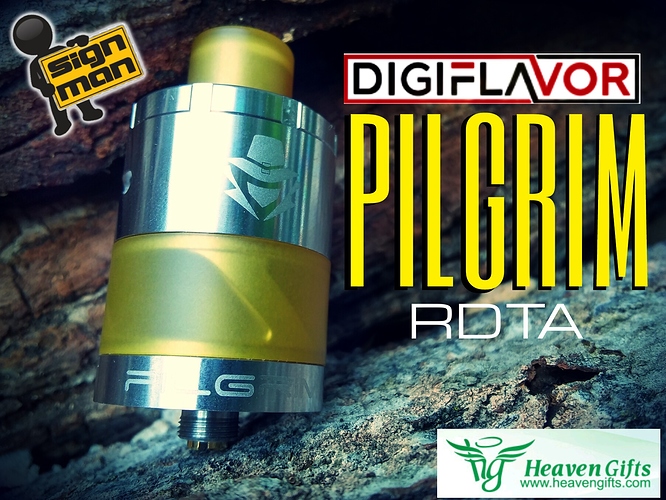 I first saw photos of the Digiflavor Pilgrim and I was a little skeptical… But looks can be deceiving. I was just about over RDTA’s. I had been using the Avocado 22 and 24, along with the iJoy Classic and they’re fine… Great vaping RDTA’s that found themselves build-less and shelved… I always end up going back to RTA’s and dripping. This is the first Digiflavor product that I’ve used (excluding GeekVape stuff) and I’m already looking at getting another. I’m gonna break this puppy down and show you the genius in the design…and how it works like an RTA. 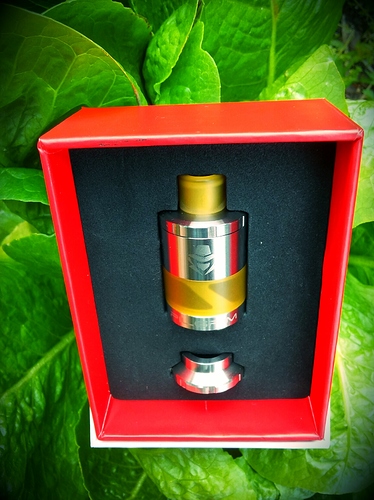 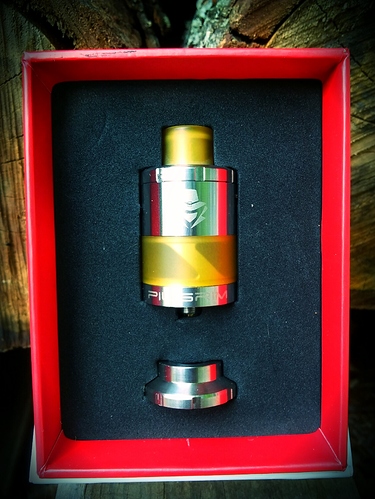 On the outside the Pilgrim looks like an everyday RDTA. A tank with an RDA mounted on top. It has a few tricks up it’s sleeve though. It’s made up of 3 sections: 1) The top cap/lid that closes off the juice fill ports 2.) Airflow/ inner chamber area (I’m calling it the top section) and finally 3.) The tank and build deck section that are made together. There are two top caps, one with a proprietary ultem tip and the other accommodates 810 (Goon) tips. Unfortunately a tip for the 810 adapter is not included and would’ve been a nice touch. I enjoy using the ultem tip. It’s comfortable and works great. Moving down you see a Liam Neeson Darkman looking guy and the word Pilgrim engraved on the middle section and bottom ring respectively. They’re both very subtle, keeping the attention on the tank as a whole. The black version looks killer too. In the box you get spare o-rings and grub screws, a tri-tool with flat head drivers, and a 510 adapter that fits into the 810 top cap. Instructions are not included so the box directs you to Digiflavor’s website for more info. 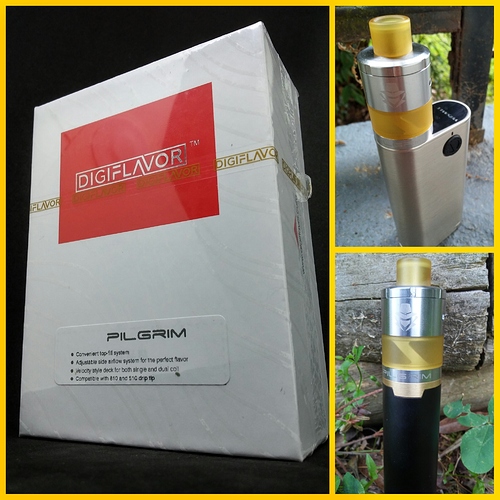 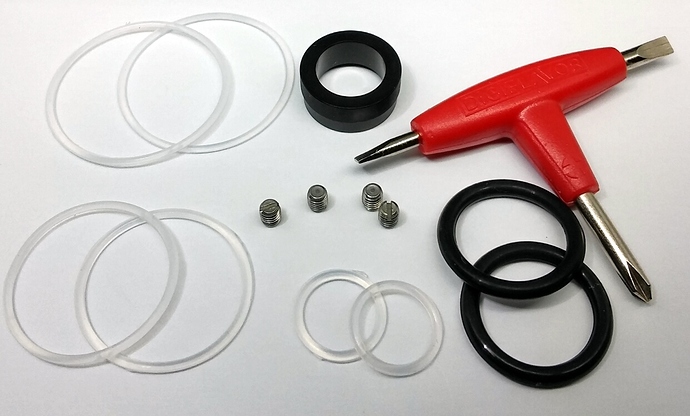 The inner workings, what you don’t see from the outside, is what separates the Pilgrim from all the other RDTA’s as fas as I know. Lately companies, especially DF, have been making RTA’s with the deck centered inside of the tank (like the Siren for example). Now they’ve used that same concept in an RDTA. The deck is encased inside of a chamber with airflow tubes leading to the outside. The airflow is cut off from the tank so the only way it can leak is if the deck floods. Depending on wicking and the VG ratio of your juice, it can leak though if left on it’s side for too long. I get that. Cotton isn’t used for building dams… and it wicks the best when it’s loose and fluffy. Using a 70/30 blend juice and a single coil, I left it on it’s side with the coil and airflow facing down on a napkin. Ten minutes later it finally leaked…not too bad, but it didn’t have a chance under those conditions. Leaving the airflow facing up it didnt leak a drop. 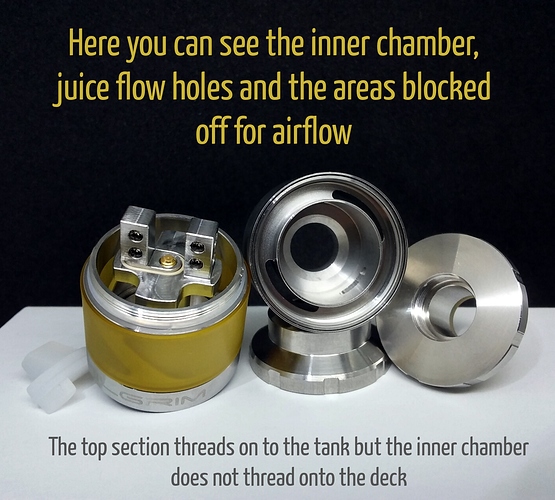 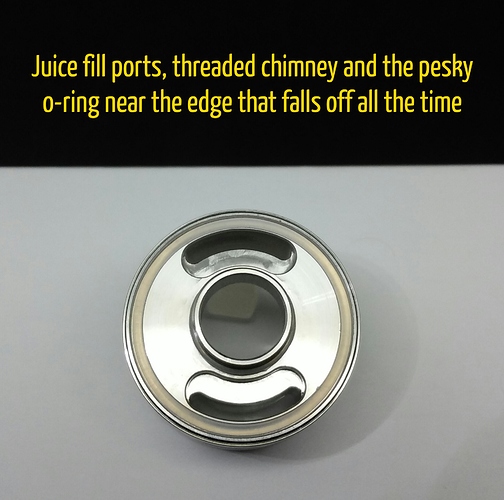 The top section screws down onto the tank and once it’s tight the airflow can be adjusted. It looks like the top section would unscrew when turning the airflow ring counter clockwise but it stays in place nicely. Turning the airflow ring will adjust the size of the airflow opening like most AFC’s. There are 3 slots for single and dual coil configurations, or you can run a single coil with dual airflow if one slot is not enough. One slot full open is a tight, restricted lung hit. With two slots full open it continues to be resticted, but it’s enough…and smooth. This baby was built for flavor but you can still get it to bust out some thick clouds. 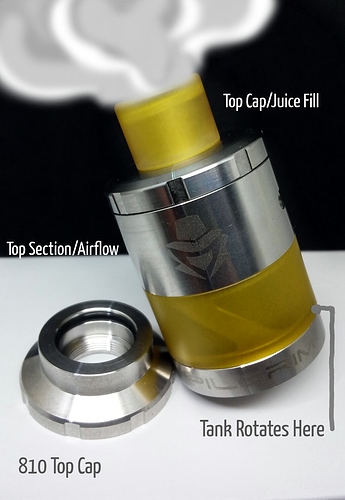 After the top section is secure, your airflow isn’t going to line up with the coils. No problem! Just grab the tank and twist! The top section turns with it allowing you to line up the airflow with the coils. It works because the base (the ring below the tank) and build deck remain stationary while everything turns around them. It’s an awesome design! I pulled on the tank section but could not get it to come off. You can still clean it since the deck has a huge gap around the outside but you won’t be able to pull it off and scrub it down… that could be a con to some. If I find out that it’s removable I’ll let you guys know. 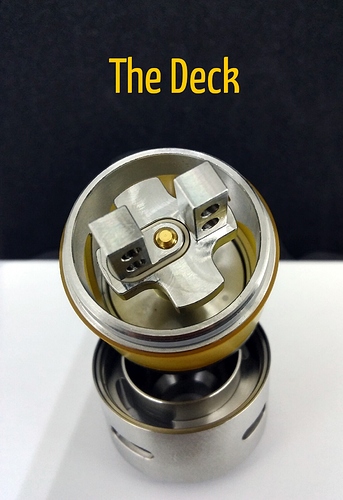 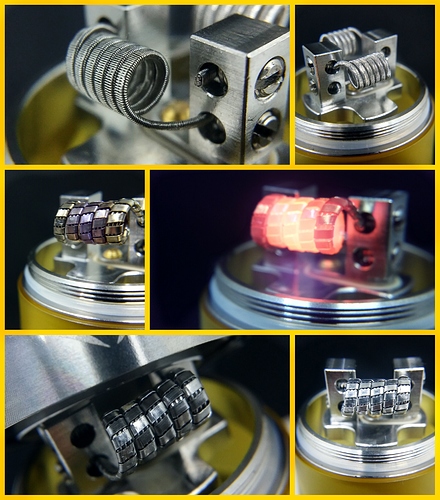 The build deck looked so familiar…I picked up my old Griffin 25 and compared it’s deck to the Pilgrim’s…the resemblance is uncanny! Space is limited so you have to keep your builds small to keep from touching the chamber walls. They’ve used flat head grub screws to secure the coil leads and that’s a pro in my book, but they ruined it by not cutting the slot deep enough, making it a pain to tighten. Wicking is easily accomplished by pressing your cotton into the huge cutouts. You just have to tuck them in nice and tight because that inner chamber is going to come down and seal it off. I like to leave my wicks a little long and cut them at a sharp angle, that way they’re nice and thick up near the wick channels and leave a few fibers dipping down into the tank. 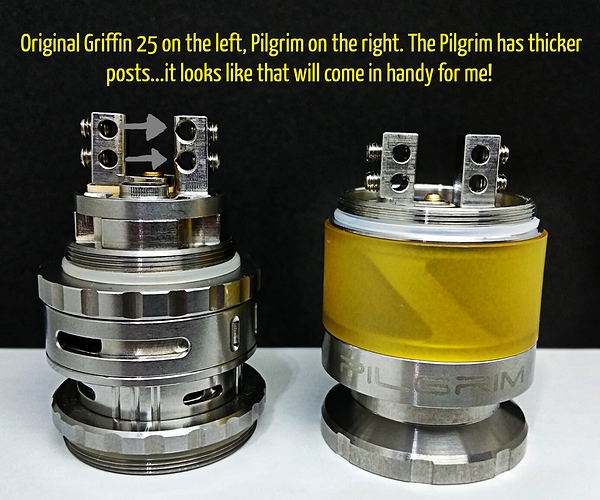 The chamber inside is very tight and compact, helping to increase the flavor, but it limits the size of coil you can install. Anything over 3mm ID will definitely be too big and they can’t be too wide or your cotton will get choked off. Subjectively, I get better flavor with dual coils. A single coil is good, just not as rich and saturated. When running a single coil, the silicone block reduces the chamber even further by creating a wall behind the coil, concentrating the vapor. It’s also slanted on the backside so when both airflow slots are open you get smooth direct and indirect airflow that can be restricted down for a whole new experience! 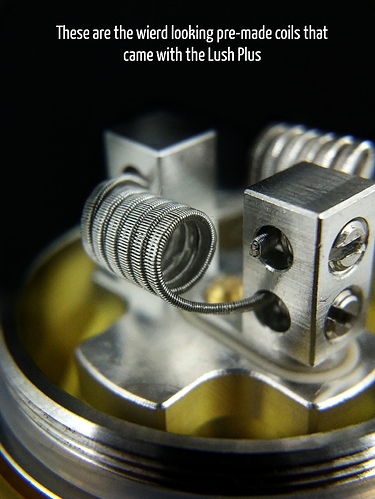 The Pilgrim is 25mm around and 34mm tall without the drip tip. Removing the top cap exposes the juice fill ports…and what was a great idea can be a pain in the ass. Juice runs between the inner chamber and the outside top section down to the tank. If you fill it too fast it can make an air bubble and overflow. It takes time to crawl down through that small gap. My biggest gripe is the crappy little o-ring that sits in a groove on the top section. It helps seal off the juice fill ports, so it’s necessary, but falls off just about everytime I go to fill the tank. If it were built-in to the top section there wouldn’t be an issue. I measured out the juice capacity and if the tank is filled all the way up to the very top (and you can fill it all the way up to the drip tip) you get 4.5 ml max. You can also remove the top section and fill the tank through the gap that surrounds the deck but you loose the extra half mil. 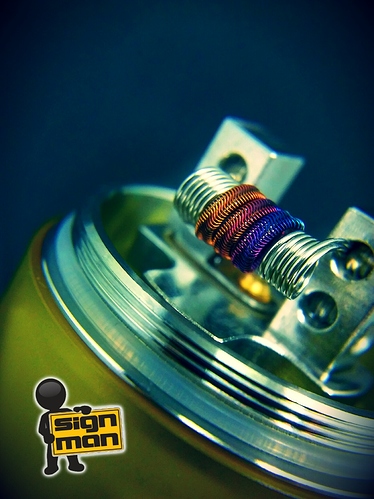 The Pilgrim is a pleasure to vape. It does exactly what it was designed to do with minor cons here and there. I would have liked to have seen some pre-made coils and an 810 tip included. That would’ve been a nice bonus. I also wish that one stupid o-ring was stationary… You know the one.

Digiflavor-Pilgrim-GTA-top-filling.jpg1200×373 62 KB
I’m not sure why it’s named the Pilgrim…a quick online search defines a pilgrim as being a traveler from afar on a journey to a holy place. I guess that could mean that flavor chasers search and search for the perfect vape…the holy place of flavor, and the Pilgrim RDTA is that holy place? Maybe to some it will be. I’m gonna keep looking. The search is never really over. Even if I did find the best vape ever I would still wonder if there was one even better lol.

I think that’s it! I’ve tested this thing as much as I can and can’t think of any more to add. I want to thank Heaven Gifts for sponsoring this review! If you’re interested in checking out the Pilgrim you can do so here:
https://www.heavengifts.com/product/Digiflavor-Pilgrim-GTA-Black.html

Any questions you have hit me up in the comments. Thanks!

Thanks man! Do you use rdta’s much? If so this one isn’t half bad. I just hate the tilt-n-vape part the most lol

Booo spending freeze! You can’t buy any vape gear? Hopefully they can sort that mess out

The Mrs has spoken and one must obey she who summons fire with neither tinder or flint.

Nice informative review. Thanks.
Not up my alley though, the product i mean

I only do tubes and RDA’s these days.

Thank you! I cant blame you there. I ran this on that GeekVape mech tube since the tube is also 25mm and it worked pretty good but once you get hooked on dripping its hard to go back!

Great review and awesome pics yet again man, I’m really not a fan of bottom feeders though I have a few on the shelf that never get used.
Still…love your work man

Great review! Thanks for taking the time to share it. Lovely looking RDTA.

Great review @SignMan. I’m a tanker and RDA person as well but have been entertaining an RDTA. Will keep this one in mind but…
Also, I clicked on the link and said 404 Error, No Product,hmmm.

Stop your making me blush lol

Hey thanks for the heads up! 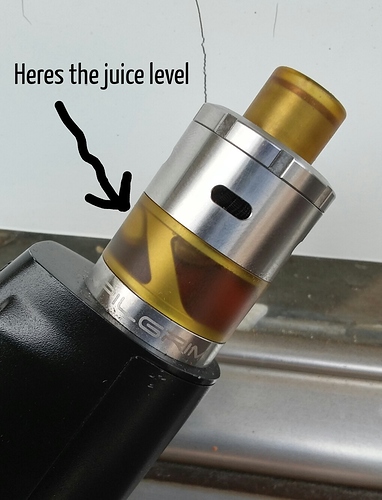 Looks like you put some time into this review, with the pics and captions and shit. Nice job! I was about to pull the trigger on the Perseus, then I spotted the Pilgrim over on Vape Happy’s site (pre-order). Based on your review it looks like ol’ Perseus might have to wait!

Thank’s man! I wanted to write reviews that describe the product in detail, and in a way that makes readers feel like they are right there with me! Hanging out, vaping and checking out a cool new product and what the hell it does lol. So far I’ve been able to do everything from my crappy LG phone, mostly because I use a computer all the time for work and want to get away from those damn things when I done! Thanks again for reading and I hope you enjoy the pilgrim as much as I am.

NICE PICS, I just ordered one of those yesterday, from Health Cabin, for $25.00 should be here in next week!
weekend sale NO CODE.

Wow that’s a steal! I’ve never heard of Health Cabin but it sounds like I need to check them out. The Pilgrim is well worth $25

Hey really nice review, would you recommend pilgrim gta only for a single coil use?(flavor wise)

YEP! I wish had an extra $25, but I’m sure I will be very happy! with my purchase after watching MikesVapes review, then yours.