Diluting nicotine to eliminate one ingredient for mixing

So I’m a very lazy mixer and that is why I love elr. Problem is that I get lazier the older I get so I had this brilliant idea:

You could dilute your nicotine, not just for safety this could also save you a little bit of time mixing. E.g. you usually mix with 70% VG and 3mg, and you have 72mg nic in PG and pure VG. Now you’ll always be adding a fixed amount of VG and nic for 10ml of eliquid so you might as well mix them. So instead of adding:

BOOM you have eliminated one component and saved yourself one unstoppering while mixing. Not sure if this would be interesting to many people or if this just counts as advanced nerdy laziness.

A problem with this though is that ELR doesn’t actually allow entering decimals like 5.66% as a value for PG-content of nicotine. It would be great to allow decimals in that field although I know it has to do with input field formatting etc. I’m not sure how this could be added to elr in a more elegant way.

If you manually type them in instead of using the buttons you can put whatever value you like in for PG content of nic, although it does do some odd rounding once you get to the thousandths decimal place.

Thanks, yeah you can enter them but unfortunately you can’t save the recipe. It says “enter nearest number 5 or 6”

Once the flavors are added I use the value in green. Instead of 3 additions, it’s only one big one. I think @DarthVapor does something similar. 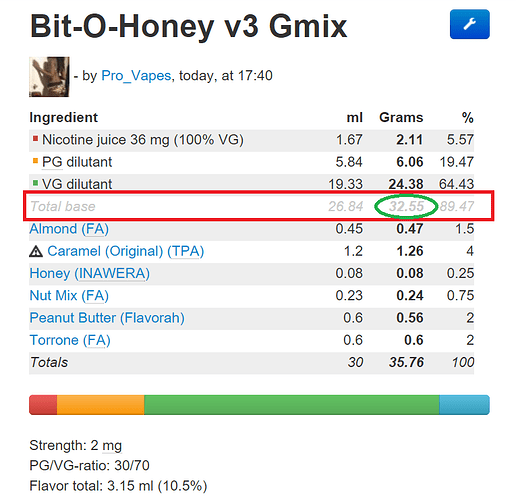 Not quite sure how you mean (I guess you mean 0.3% nic = 3mg/ml). I guess it works well enough but won’t get 3mg or the PG/VG ratio precisely.

I’ll add a picture here as well to show what I mean:

So instead of this: you would have this: PS: I guess the ideal way would be a toggle button that says “convert to pre-diluted PG/VG nic base” that shows you how to premix the PG/VGnic base and changes the values accordingly.

You’re right… I make this mistake quite often when posting. Thanks for clearing that up.

I guess it works well enough but won’t get 3mg or the PG/VG ratio precisely.

Not precise on all mixes but close. It’s not a noticeable difference for me. I can vape up to 6mg nic without a problem. Using this method doesn’t get anywhere near that.

Why yes I do

For my max VG blends I make a base @ 0.4% nicotine so my final juice is anywhere from 0.3-0.4%, depending on my flavor % of the juice. I find this method extremely convenient and a lot less of a hassle than pulling out my nicotine and VG per recipe.
Typically my personal juices fall between 10-15% but I am a little bit all over the place and a few are upwards of 20%, although rare. I could probably make a base that has 0.35% nicotine but the 0.4% really makes the math a breeze. For me it also saves on nicotine life. I keep mine in the freezer and only keep a small bottle out and this way I don’t have to keep pulling it out, thawing and refreezing.

Funny you bring this up though, the company I am working for want me to make different pg/vg blends and I am scratching my head on if I should make various “bases” ie 30/70, 50/50 and so forth. I think I am going to approach this how I approach making juices for others and go through the tidiest process of making juices bottle by bottle.

I’m with @Pro_Vapes on this though and if you do not mind the % window of nicotine it really is the way to go, unless you are making for others or need to be precise and dead on the $.

Looking back I really want to smack the crap out of myself on how I first starting mixing. Syringe/pips, bottle of VG/PG, bottle of nicotine and beakers. It would take me 20 minutes to make 1 10ml tester!! Now everything is in drippers/squeeze bottles and by weight. I can make 15 juices in that 20 minutes now

Not sure if you mentioned it but if you do make a base like this, set your “desired strength” to zero and then your nicotine strength to whatever you use in your base (I think mine actually says 6)

Since you have already made a base, these numbers and calculations are mute and you only need to focus on the “total base” to see what you are measuring out.

If that makes sense? 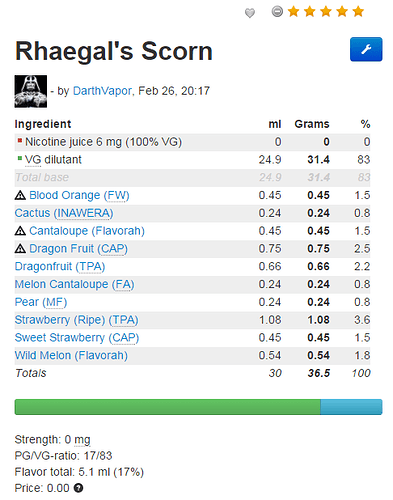 So I just simply measure out 31.40 grams of my premade nicotine base and it keeps my recipe a bit more tidy

If it wasn’t for this thread, I wouldn’t of realized I am still using my old base which is 0.6% nic. Time to update!

DV, I edited your posts to say what you mean

Haha yeah syringes… /Me still cringes when I see beginner guides for them.

I guess you also check “max VG” so even though nic level and PG/VG ratio isn’t precise, at least the flavouring percentages are precise. I guess that is a pretty good compromise!

I hadn’t thought of that before and it would help a lot with mixing faster! Thanks!

Apropos syringes… I actually thought about making a juice mixing robot for rapid prototyping using a magazine or 3D printed chain loaded with 20ml syringes holding the flavours so you could have hundreds of them and no mess. But I’m not an engineer.

it would help a lot with mixing faster!

Problem is that I get lazier the older I get

These are my top two reasons for doing it this way.

I guess it would be mostly optics but might also help you recreate a specific mix you done and would also show others the laziest^tm way of mixing.

I believe that may be what the “Make a Base” option does from the blue wrench. I’ve not used this option, but that was how I interpreted it. I could be wrong though.

Oh interesting. I hadn’t tried that one but apparently it’s for just pre-mixing the flavour portion of your recipe. So kind of like the opposite.

Ah, gotcha. You want to assemble a Nic base. Would be kind of cool if the database handled Nic base like presets. Enter the Nic numbers like normal or check a box to use a Nic base then pick the one you’re using from a dropdown list (3mg-100% VG, 6mg-50/50, 12mg-100% PG, etc.). Then it could run the calculations and improve accuracy.

Is that the idea?

“Make a Base” option

It only make flavor bases.

Enter a flavor to be deducted from your base at the % of flavor you average.

I just key in my ratios and the amount I want to make in the calculator. Then I mix the values in green and shake like hell! 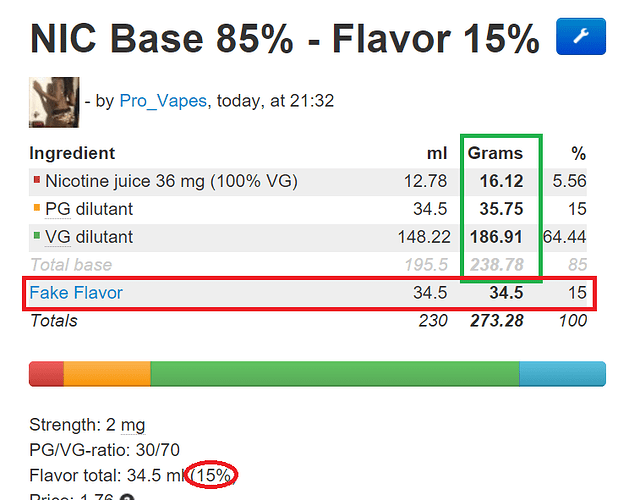 Well the drop down menu wasn’t actually part of my idea. Presets could be nice but they could also add unnecessary complexity and confusion. Personally I don’t mind entering the normal values. Well except…

For a “premixed VG/nic base” it might be a good idea. So for my initial idea my suggestion would be to have an option in the wrench menu for “make premixed VG/nic base” and it shows you how to mix that one and also can substitute those values in the current recipe. So you only add VG/nic base and PG diluent (hey I just learned a new word!) and flavours and eliminate one ingredient.

But I actually like pro_vapes solution better. It’s not precise for the PG/VG and nic percentages but it’s precise for flavour (where it really counts) and even lazier. Especially for prototyping it’s the best workflow (mixflow?). So my only suggestion now would be to add a “lazy base” option similar to the “max VG” option to just display the resulting values.