January of this year I purchased my first two DNA devices Opus DNA 200 one for a friend and one for my self being a bit gun shy do to bad experience with other devices and cost of the mods this was like last chance before I give up on VV VW device’s and stick with my trusty mec mod well bad start my mod went up in smoke within the first month to say I was upset no Furious would be closer .evolv got me a new board in under a week .so I installed it with the attitude let’s see how long this last to my surprise it stayed working i did not understand the new laws so ordered backup devices and boards late June .well July I started a clam on the first new one that failed blew the fuse it was running Bellow v3 coils 0.3 kanthl build at 43 watts unbelievable but my first board failed on kanthal as well this time it was my friends new opus that failed stuff happens install one of the spare boards and a week later he is bringing it back not working well did not blow the fuse the inductor fell off the board I just learned what it’s called as I am learning way more about the making of the DNA 200 than I care too know I found these pic good at identifying the part that just fell off or just melted on your board 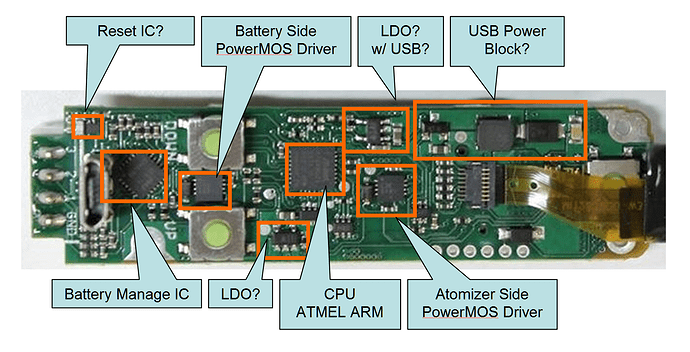 7d551b22.png1881×798 749 KB
And I be darn if my original opus DNA 200 did not flash warranty message Sunday and stop working with burn marks next to the square thing called inductor and this other thing called Mosfes or something like that so I just needed to vent as I enjoy my mec mod and my old RDA as I stare at my boreas wondering if I can get a build that my old Tesla 15 watt device will fire 1.3 ohms just venting
3 Likes
BoDarc August 23, 2016, 3:16pm #2

I ran across a link to the replacement fuses and found they were like 50 cents, but the cheapest shipping was $5

We need to do a group buy and get like 100 of these and pay the $5 shipping (they’re tiny!) [looks around for a volunteer ;-)] …oh wait is this a Tobacco Related Product

Thanks evolv sent me a new board for my friends mod the pop the fuse I opened a RMA on the other two the fuses are still good I just can’t grasp this run of bad luck I seem to have I am pretty sure on my old go to mod .after new board it’s going back to clean and spaced titanium builds it was trouble free before I started playing with ss when I get it back together

Oh that’s cool I understood your post, no worries. I think this thread has legs, and there’s already much discussion along these lines. I was just posting some info for the questions to follow.

Also a fan of Ti here because it just works so well in my TC mods. One thing may be matched/married batteries. As batteries age they can create problems in 2-3 battery setups when freely mixed/matched. Example you put one new LG H2 and one 6 month old LG H2 in a 2 battery mod and you are creating problems for the DNA chip and the batteries …but we can only guess why yours flamed out, and have seen the same (even more dramatic!) in other mods (RX200)

I think one of the reasons these higher end mods are priced so high is similar to the Craftsman screwdriver …I mean who’s gonna pay $10 FOR A SCREWDRIVER!~?! …the guy who knows he can always return it and get a defective replacement. Best of luck resolving, but Evolve already got your $$ so I think you’ll be taken care of

My mods use lipo or did I had to dig around for matching set of 18650 for my mec mod I just got in to deep thought and forgot I was using my RDA nothing brings back memories like .2 coil and dry hit

Correct me if wrong but if using a dual 18650 mod dna/or not married batteries mean married together when new…same brand and everything right out of the packaging. Not really picking two that are the same but one used already for 6 months and one for 3months.

Also acknowledging I have done a lot of reading but own a dna device but knowing how badly you can monkey the settings through escribe I am wonding if you have something set wrong in the programing. Like if the preheat is seat to 200w it wil blow the fuse ect.

Just food for thought. I know some pro will jump in here.

No paired from day one I mark mine I have not used them in awhile my cell on my lipo DNA stay equal 3.99 3.99 3.98 1 point is the most I will see
On settings my experience if you get very far off your going to know it quick after using the device for awhile the board will not work very well all In temperature mode it is sensitive has to be. I use the settings from evolv for titanium and ss my pre heat is 120 1second 60 watts run temperature dominant 440/490 degrees Fahrenheit 0.1/0.17 ohm coils 24 GA max watts I set at 130 for kanthal but never been over 95 keep in mind the inductor is what come lose on one until I new the name for it I could not search for problems come to find out there has been more than a couple from what I understand it’s a heat sink as well .the opus box is all aircraft aluminum and has a very good heat sink thermal properties the only thing I can come up with being in the south FL it’s august and hot but the board has a over heat shut down I have never seen it flash too hot but have seen board Temps 108

Sorry to hear you are having issues @lost_in_vape ! I found an issue with one of my DNA200 last night .The Protovapor Silo is flashing the Ohm’s too high warning.I think it has a weak connection on my 510 as when I unscrew the enclosure and try it it works fine but when it is all bolted together I get the warning.It does the same on three different atomizers so I am pretty sure it is in the mod.
I did try and go back to a earlier firmware but that didn’t help.I will look into it further this weekend when I am off work and try and find the problem before sending it in for warranty.

My Smok Priv was doing that yesterday, drove me mad, on every tank, I stripped it down and used an air duster to blast it all out, I have a feeling liquid was seeping in somewhere, anyway it seems to be fine now, might be worth a try.

When I pulled the enclosure apart I was expecting to see liquid in there but nothing stood out.I will try and clean it out better this weekend and keep you posted.Thank you! 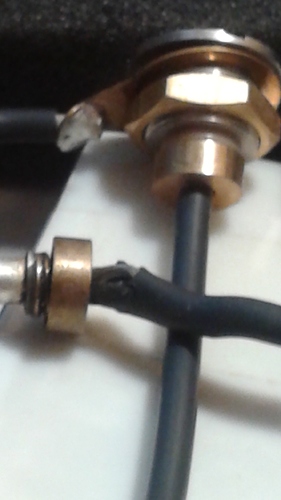 I build at 0.1 / 0.18 titanium and ss just started using ss what do you build at wondering if I am building to low

Thank you , I mostly use Titanium 22 ga at about .06 aka @Pro_Vapes deep water build.

I will have to look and see but am pretty sure it is a 3.0 on the Boreas.
EDIT: I am using a 3.0 mandrel for my coils on the Boreas. 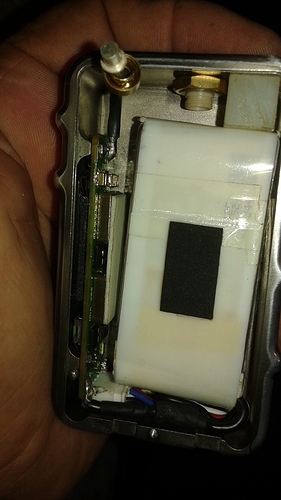 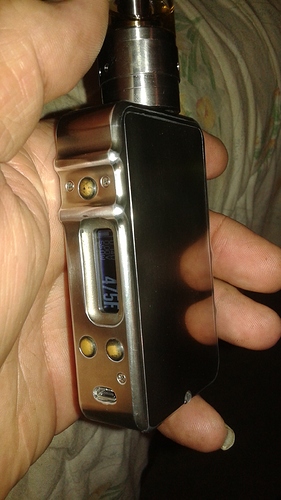 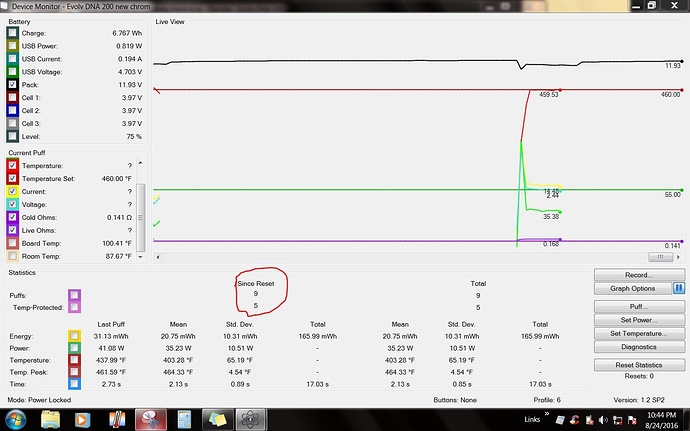 I sure like to see some other grafts from others really like to see puff counters the highest I have hit with out burning up a board is just under 60000 puffs or 7 months with most of the board /fuse problems seem to show up from my limited experience under 8000 puffs under 30 days
I like the puff counters did some work on one it was all most a year old had under 20000 puffs not trying to bash the DNA board it’s the only one I use
I like to have a idea how many gallons of vg to a board .I get a year out of a gallon people run the other way when I offer them some of my ejuice still learning so my juice consumption is lower than most 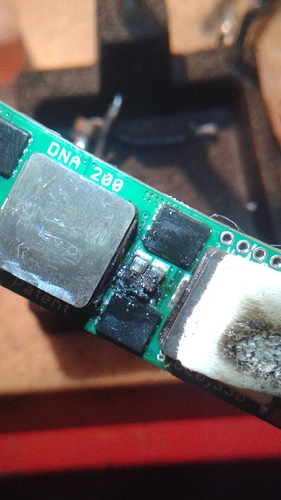 Do you by chance have a shot of the pcb before whatever incident occurred??

Normally when I see splattered solder like that, it’s due to a power surge (of some type). Possibly almost a solder bridge (where two joints were just so close together they finally arced once a threshold was breached), or possibly a spot of liquid falling into the area, creating an instant short, causing a “mini explosion”.

Definitely curious though. Also, from the picture, I can’t tell if the lower surface area is thermal tape residue, or an actual scorch mark? I have seen various TIM’s (thermal interface materials) leave a similar pattern once removed, but I could also see it being heat damage. Hard to tell from the pic.