I have been toying with the idea of steeping an e-liquid in a wooden barrel for awhile now. A few weeks ago I decided to buy a little 1 liter keg to try this out.

So I wanted to put together a recipe that would benefit from being aged in an oak barrel. Here is the recipe…

After mixing, the concoction was poured into this lil guy… 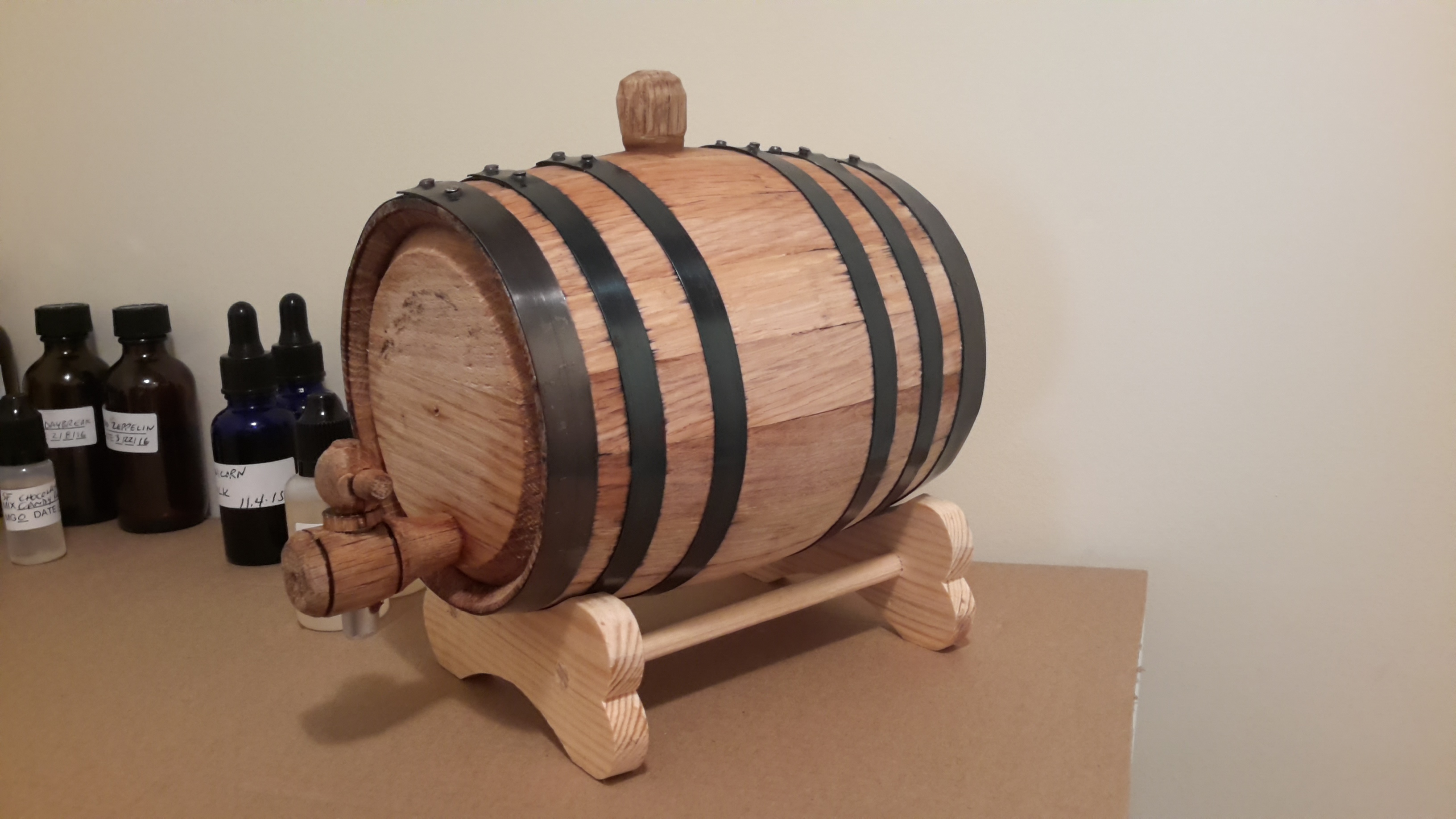 The barrel was purchased here…
http://oakbarrelsltd.com

It has been in the barrel for a couple weeks now and I just tested it. The vanilla is developing nicely and as of right now this juice almost has a vanilla cream soda kind of flavor to it. It is vapable right now believe it or not. But knowing what MF Vanilla does after a couple months I am certain this juice is going to be even more amazing.

The flavor from the barrel is already adding a note to the juice that is ridiculously good combined with the other flavors in the juice.

Anyway, I just wanted to share this aging method and give my thoughts on it so far. I plan to let it age in the barrel a couple more weeks before bottling. At that point I may be willing to share some samples with a few people here to get some thoughts on how it turns out.

That is just awesome! Thanks for sharing

LV, you are gonna blow Five Pawns to hell, what a great idea. I knew you were up to something…

Lol. Not my intent. But it is pretty unbelievable already. I am ordering 4 more barrels to try some other recipes in.

@Ken_O_Where is also playing around with infused wood flavoring using french oak chips. Maybe Ken can chime in here with what he has been toying with.

Please send me a sample, I’ll trade you something, man I want some…

Im on my tablet stuck in bed so i cant do so today, ill see if i can tomorrow. Looks good, LV!

Oh, and remind me wtf it was that i was supposed to send to you because i completely forgot, been waiting to catch up with you in chat but im down for a couple days.

@Ken_O_Where is also playing around with infused wood flavoring using french oak chips. Maybe Ken can chime in here with what he has been toying with.

What an innovator you are sir! And the idea of the wood chips - reminds me of a convo I was having in a thread with (he was Jimk) @Kinnikinnick where he was looking to get a cedar note in his tobacco. I remember suggesting using some of the thin cedar separators from cigar boxes. Don’t know if he ever did that but I still think it’s a good idea and your post may inspire him, me and others.

I forget? I have been wanting to ask you what all I was sending you also lol. I pulled the flavors down, but my ex’s daughter put them back in the rack. No worries

@Ken_O_Where , do you have logging turned on in your irc client on your puter?

I do, yes. If you send a PM to me or To0nMaN it will be there even if i lose connection, just keep it under 50k lines, hehe.

I was inquiring so to suggest you search back to our conversation to see what flavors i was sending you. I have no memory of that night lol.

Hmm, it probably passed the 50k line log mark by now. Ill check as soon as the room stops spinning.

Love the concept. I’ve read a few of you guys were considering this lately. I’d love to sample it but am sure it has more pg than I can take.

Vanilla MF reminds me of a vanilla cream I love the stuff. I bet that your batch will be Ah’Maz’ing in just a few weeks ! Woo woo keep us posted !

What do your think about the wooden barrel sucking up the flavors of your concentrates?

I love this idea. Not really ready to do this myself.

But with the question above. How do you feel about doing this with just straight pg/vg and once the steeping is complete then add flavors after? So you would have an oak infused of/vg that you add flavors to later?

You have to pre-soak the barrel for 24-48 hours before adding your juice to the barrel. So it is not like the wood is a dry sponge when you add your recipe to the barrel.

The oak isn’t going to pull just the flavoring out of the juice anyway. The way it works, as the humidity drops, the oak draws in the liquid. When the humidity rises the liquid is forced back into the barrel. This creates a filtering process through the wood fibers, imparting the oak flavoring into the liquid. I learned that at Wild Turkey a few years ago

Regardless, 2 weeks in and the flavor is as strong in this as any juice I have made. The Butter Pecan and Hazelnut are in the background where I had hoped they would be. The vanilla is the front note and is so good alongside the oak note. And the whiskey is adding just a touch of bite to the mix. I am not at all concerned about any loss of flavor at this point.

But with the question above. How do you feel about doing this with just straight pg/vg and once the steeping is complete then add flavors after? So you would have an oak infused of/vg that you add flavors to later?

That would be a cool idea , that way you could have several mixes with the oak infused essence.I like the TPA Ky Bourbon flavor in the Castle Long style mixes , but I wonder what would happen if you stored some Makers Mark in the kegs for a month or two before using them.I wonder if that would give a more authentic Makers Mark flavor?
Cool idea @LordVapor , keep us posted!

@LordVapor This is definitely some next level sh*t, Bravo sir. I would guess you could reuse the barrel for a couple more batches(?) I ordered some Oak Wood (FA) as I also had some plans for liquor-based Juices. Have you guys had bad experiences with normal flavoring options like Oak Wood from FlavorArt? heh I am picturing you trying to fill your tank/dripper from that tap

I go back and use oakwood FA from time to time. It’s a nice 10ml bottle to have in your collection. Come to think of it I need to dig out my recipe that uses it.

I ordered some Oak Wood (FA) as I also had some plans for liquor-based Juices.

I use it in two or three mixes , one is the Castle Long Reserve clone and a rendition of Cotto’s Revenge a vanilla custard with a smoky bourbon taste. I don’t have any problems with the Oak Wood (FA) flavor.