I did not receive this device for any specific review purposes.

All of this information is either straight from Joyetech or formed from my own opinions about the device itself.

I was in the mood for another single 18650 mod and I came across this bad boy the other week, the eVic-VTC Mini.

The mod is presented in a nice box. If you couldn’t tell from the writing on the bottom of the box that this mod is a TC mod, they definitely gave it away by slapping all the ℉ & ℃ sings all over the box. 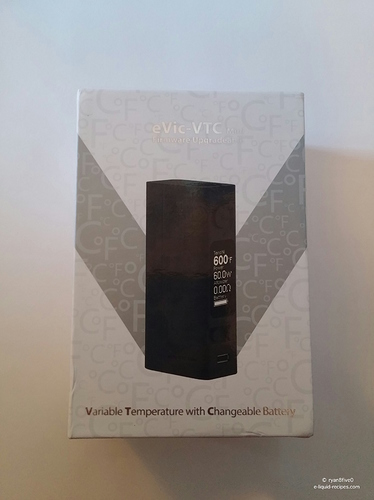 Upon opening the box, you’re greeted by this little guy: 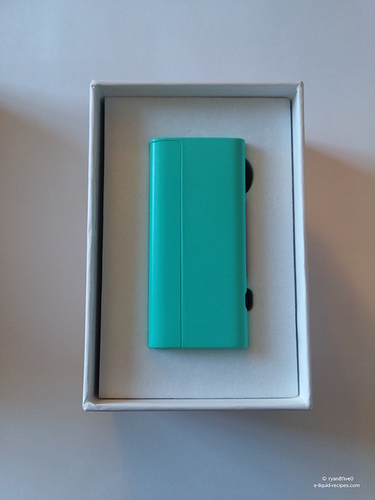 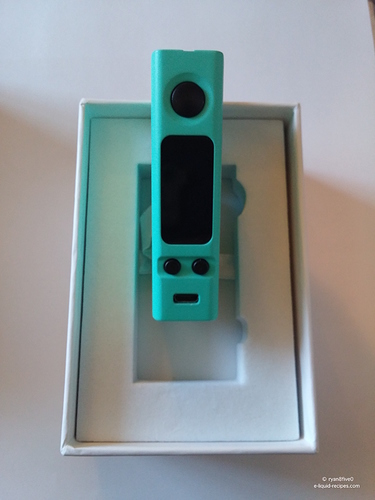 This is what you will find after dissecting the entire box: 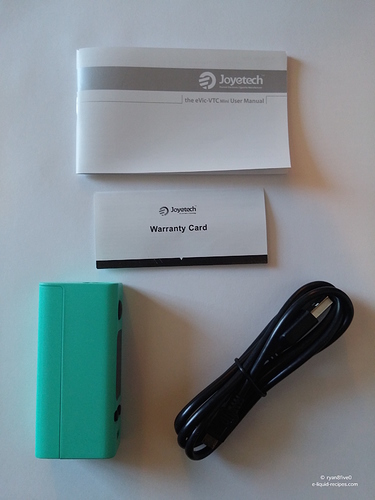 With 5 clicks of the absolutely marvelous fire button, you will be presented with this beautiful screen: 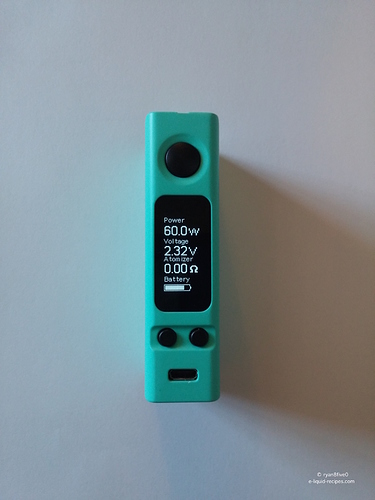 The screen has the following settings for each of the 4 menu displays:

To get into the settings, press that amazing fire button 3 times and the first menu option will start to blink. Note: ONLY the top option once set has the ability to scroll left and right (Up & Down). Once in the settings, the left button is used to scroll down to the next choice in the settings ( 3 clicks ➜ left button ➜ you are now at the second menu display). The right button while in the settings is used to select the different options listed above from the menus (3 clicks ➜ right button ➜ you are now scrolling through the options for the mode setting). This is about the only finicky thing I found about menu itself.

Lets get up close and personal and check out this massive OLED screen. 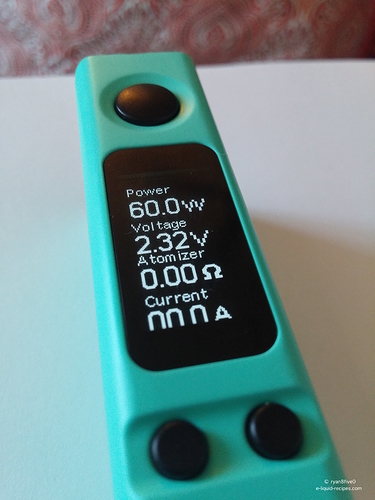 There we have it, a massive screen that does no justice other than being big. Well…I lied, it does a lot of justice!

When you receive the mod, you will not be able to change the 4th menu setting to the ‘Current’ option. You must go to the Joyetech website and install the software to update your mod via PC or Mac. I have a Mac and sometimes software isn’t as smooth as the PC version, well that wasn’t the case here as it worked flawlessly on my 2011 iMac. They also have a dummy-proof installation guide so even grandma

Note: you can also charge the battery via the same USB port that you use to do the firmware upgrades. 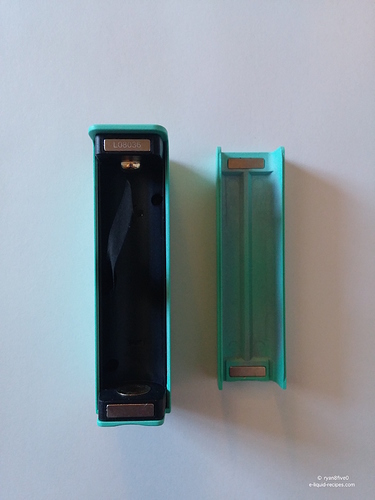 The battery cover is held on by 2 super duper strong magnets. Not your typical circle magnets like you would find on most mods now-a-days. These magnets are rectangular and have a very strong attraction. The battery cover does not slip, slide, or move once put back into place the right way. There is a nice little finger nail notch on the bottom to make opening the compartment easier. It clicks back into place with ease.

I have to admit that this has quite the battery life for a single 18650 mod (I compare all single 18650 mods against my IPVD2, as that thing has immaculate battery life). A battery lasts just as long as the same battery in my IPVD2. The worst single 18650 battery life I have ever seen comes from the Sigelei 75W. The eVic VTC Mini blows it out of the water. It’s like trying to compare a .9mm round compared to a .50 caliber round, it just doesn’t work like that… Ha

The way Joyetech has implemented the TC leaves me in awe. I am forever a Pioneer4You fan (they make the IPV series). Their TC is lacking to me after experiencing the way TC works on the eVic Mini. To me, the IPV’s TC bounces drastically once TC kicks in (it goes from your max Joule setting and bounces back and forth between the limited output created by TC and whatever setting you’re on) thus creating a ‘bouncy’ TC curve.

The vaping experience is different with the eVic Mini though. I imagine if I read the output regulation vs the temperature regulation on a scope, one would see a drastically improved “bell curve” shape to the graph. This enhances the TC experience. To me, it feels like the eVic Mini does not bounce between your wattage setting and the regulated TC’d wattage setting. When I’m vaping in TC mode I notice that there is no bouncy effect like there is with the IPV’s. In fact, it’s a smoother pull. Smoother in the sense that I do not immediately feel the effect of TC. Meaning that I feel the TC regulate in a more gradual fashion than instantaneous. You can also see what I am talking about if you monitor your screen while vaping in a TC mode.

So I definitely gotta give Joyetech 2

for the way they brought TC to this mod. One of the most satisfying TC vapes I have vaped on since TC came out.

The mod does not have a way to set/check the resistance like other mods offer. Instead, when you screw in an atomizer it is supposed to have a pop on the screen that displays “Same Coil - Left, New Coil - Right”. Although, like every mod that has this feature, it sometimes does not pop up when screwing in a new atomizer. In a cycle of doing this 5-7 times in a row, at least 1 time the mod would not sense that a new atomizer has been screwed on. All of the atomizers were at the same room temperature when I tested this out.

Here is the 2nd and last finicky thing I have found (not too sure if I would even call it finicky). Anyways, remember when I explained how the mod reads the resistance back in the second paragraph of ‘The Update’ section? If not, take a minute to go and read it (someone will need to do this

). Now we are all on the same page! I’ve concluded that when attaching a new atomizer to the mod, it does not matter if the mod prompts you about the atomizer being the same or different. As soon as you press the fire button (with the updated 1.10 firmware), the mod is going to start reading the resistance of the coil in real time as you fire it. Thus, providing the actual resistance of the atomizer regardless if the coil is the same one or a different one. Come to think of it, now you’ll never be able to not know your resistance value

I truly think this is going to be a contender for one of the best single 18650 TC mods out there for 2015. It’s not as complicated to use as a SMOK XCube II, but it offers more features and settings than the IPV D2. It has no real cons that I can find. It’s compact size and the 60W it packs gives the eVic VTC Mini some real bang for your buck. I am totally blown away by the eVic VTC Mini.

Would I buy this mod again? In a heartbeat for its price point.

Would I suggest you go out and purchase this mod for under $30 with the link in the beginning? If you don’t know my answer to this question then you probably haven’t read my review

Thanks for reading, I hope you guys enjoyed!

Nice review. Now I’m even more excited for when my mini finally arrives. Thanks .

…for that price, you almost can’t pass it up for the options you receive with that mod.

Good review. I have been avoiding single battery tc mods because of battery life. It’s good to here it has a good battery life.

I have all 3 colors of the VT 60w and they work perfectly. That would be an excellent first timer TC mod… especially if someone is getting into Ti.

I hadn’t upgraded mine, but I just did. I wish the VT could be upgraded (not that I have serious issues with it)…

Thx for the great review! You’ve helped make my decision!

Aw, man…I was doing so well! I haven’t bought anything since ECX had Inawera on sale like two or three weeks ago. This one looks like it might be exactly what I’ve been waiting for. One question…does it hum/buzz like the mustang eVic supposedly does? I have a feeling that would drive me nuts.

Thanks everyone, you all have kind words. I love the mod, can’t wait for my silicone sleeve so I don’t scratch it to hell and back

@JoJo It does not have that annoying humming that the original VTC has. Looks like they really did this mod the right way this time!

If I don’t have a battery that can handle >60W and I don’t plan to use the Current setting, should I skip the firmware update, or is there something I’m missing?

The update just takes it up to 75w, it might of updated some other firmware but it didn’t say on upload.

Got mine yesterday and love it so far!!!

Agreed! I’ve had mine a few weeks now and it’s easily my favorite. Loving this thing.

So, the VTC Mini with TRON…? I wonder if we’re gonna get the 2.0 firmware update? I like the new display and it does SS. Kinda makes me wish I’d waited on the second one so I could get the pretty red one.

It works! Just put the new firmware on my mini!

Got the new upgrade but I’m getting less vapor at 500 temp and 50 watts than I was at 40w power mode. Guess I’ll need to play with it. Or get help!!

Just seen that jojo. The tron? I think its the new tank, but why didn’t they bring those colours out sooner. Going to have to get a red one now

Updated to the latest firmwate and note mod now does 75w in power mode.

For 75w you are looking at 40 amp capable battery… which will result in lower capacity.

Really? Where do you get the hex file. In the program, I can’t seem to find anything over the 1.20 update.