Hallo There,
I would like to find more recipes that are 18mg. I am still battling to make liquids that taste good after converting them from let’s say a 3mg or 6mg and they mostly seem to turn out tasting terrible. I can only hazard a guess that it’s because the nic content is too high for certain recipes or combinations of concentrates. I’ve tried steeping them in the fridge and still no luck. What I have noticed about liquids that do well with the higher nic is that after they have steeped they don’t darken in colour much more. They seem to stay the same colour whereas the ones that “turn” go very dark brown. I like primarily dessert recipes and some tobaccos but am not a fan of fruity recipes. Thanks a mill!

Just an idea of a noob here, so don’t shoot…
Have you tied making a recipe without the nic, let it steep for some time and when ready to vape add the nicotine.

could be the nic is “expired” or just nasty brand and what u dont notice at 3mg is noticeable at 18. Gl to u!

That’s a good suggestion as I haven’t tried that yet. Will give it a go. Thanks

I have bought my nic from what I would hope to be reputable suppliers and I keep it refrigerated so it could be that its expired but then wouldn’t it also affect my 2 recipes that I use all the time and both don’t seem to be affected and taste good? They are : Soho Time and TOCs After dinner cigar.

I’ve tried steeping them in the fridge and still no luck.

This will slow the aging progress to a crawl.

It could be the old DL vs MTL recipe conundrum. If the original recipe was 3mg, it is very likely that the author is blasting high vapors and getting far more flavor molecules in the ol factory than you. You might just be getting nicotine and vg/pg flavor and no delicious flavorfulness to balance it.

Are you still in a Berserker at 1ish ohms, 13ish watts on the smallest airflow hole?

One test would be to increase your total flavor % by 30-50% and see if that helps. Maybe double it! Also, try increasing your PG if you’re high in the VG department. 40/60 or 50/50 pg/vg may increase flavor. 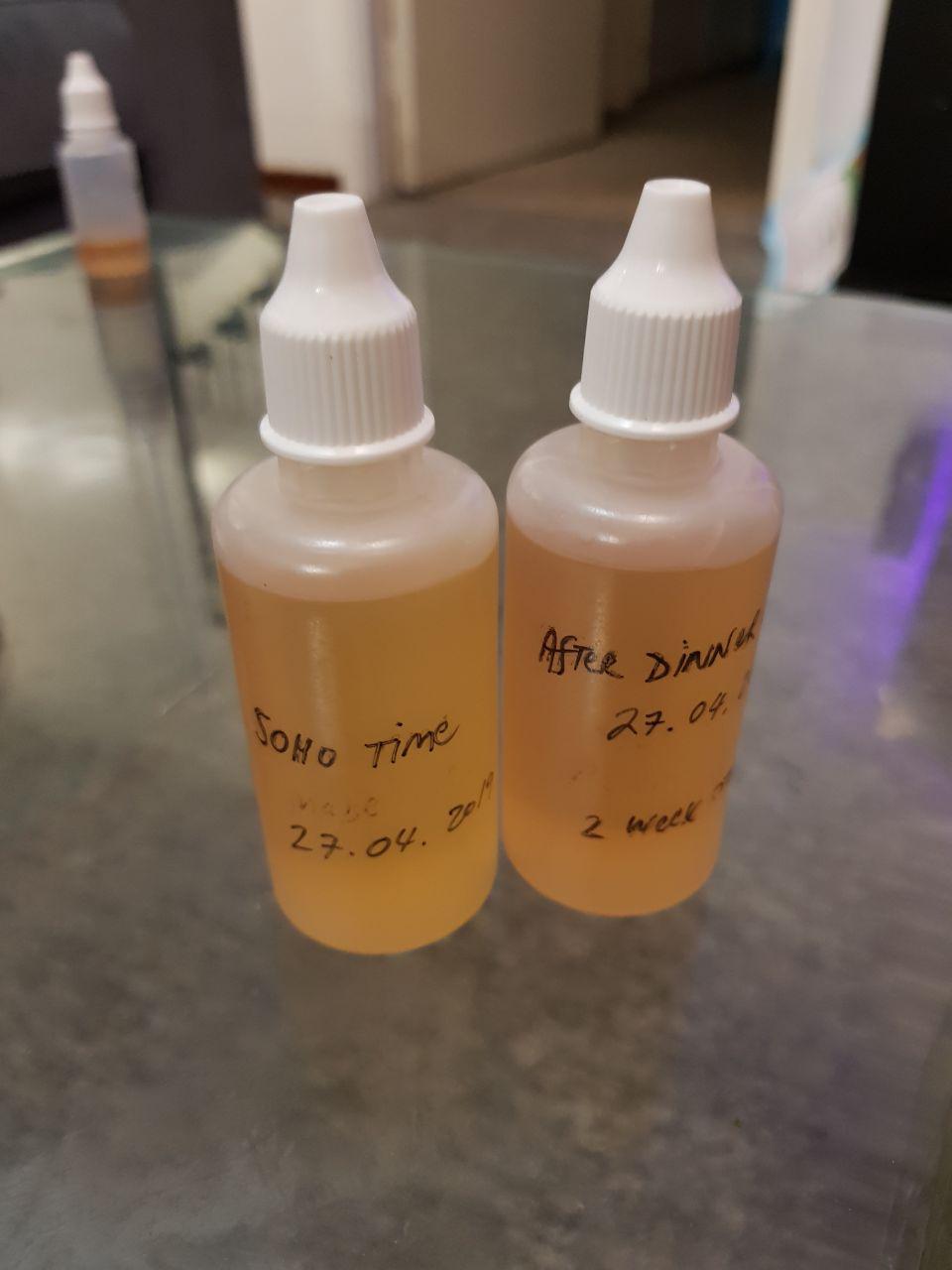 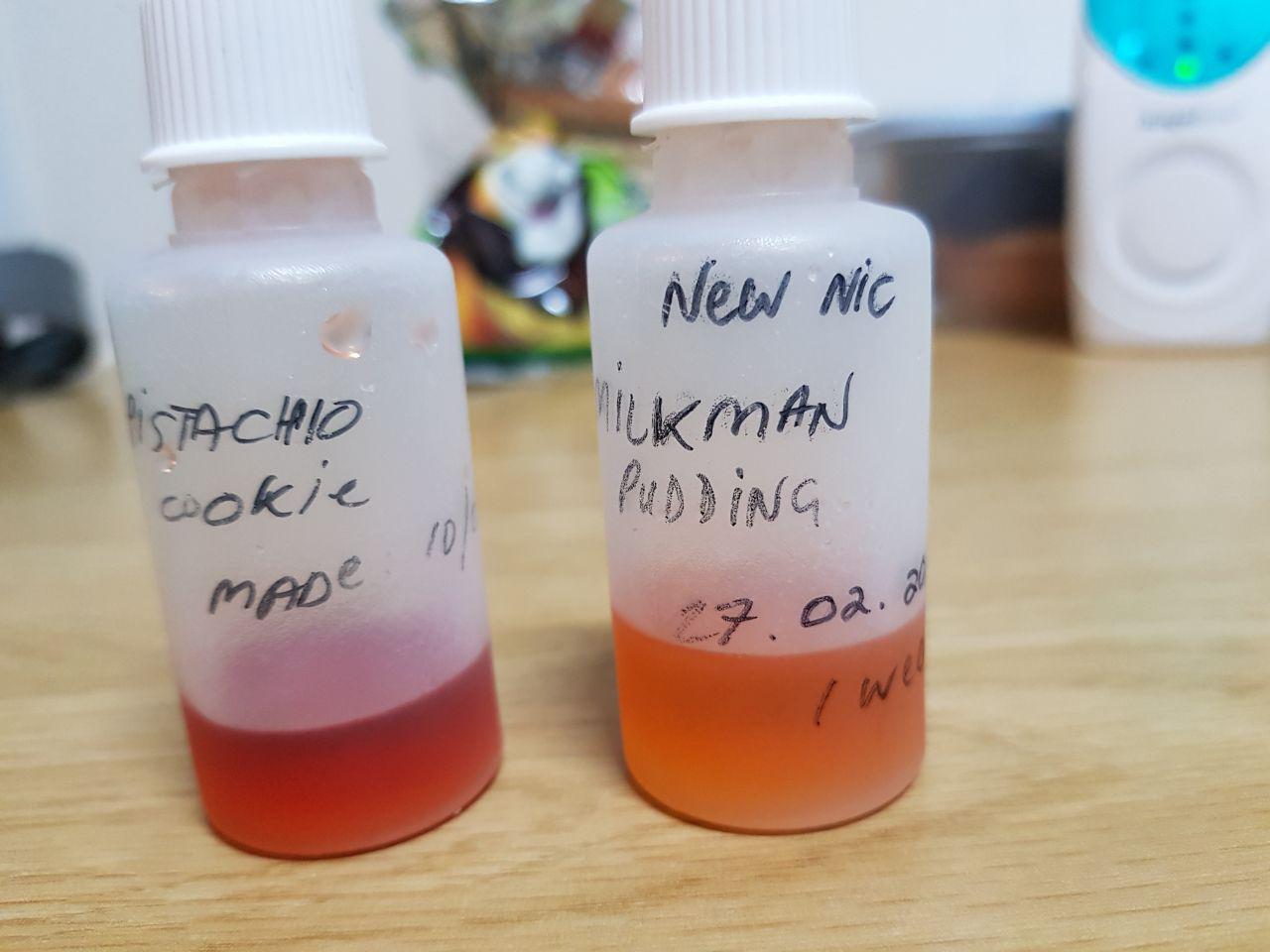 So the Soho Time and After Dinner Cigar are at full maturity and they never go darker than that. The other pic is of two other recipes that I’ve tried with new nicotine that I bought and I matured them in the fridge but the Pistachio Cookie has gone so dark and tastes terrible and the Milkman Pudding tastes okay but has also gone very dark.

All of my liquids are 50/50 and yeah I’m still using the Berserker just over 1 ohm and on the smallest airflow hole.

In the Berserker I have the After dinner Cigar, in the Kayfun Prime I have the Soho Time and my third RTA is the Cthulhu Hastur mini which is the one I use for testing new liquids.

All RTA’s have round about the same ohms and all are on the smallest airflow holes respectively.

That looks iffy to me. Nic oxidizing ends up red, any juice i have had go red ended up super rough.

Edit the one on the left that is other one not to bad.

Even though I steeped the liquid on the left in the fridge it still oxidized. I’m so confused as to why it’s happening.

18mg is very strong for regular nic, have you tried salts.

I have tried salts but bought ones only not made my own. I like the throat hit that you get from regular nic and found it lacking in nic salts.

What i can suggest is this, try to further dilute one off the “bad” coloring juice. If you have 20ml make them 30ml or even 40ml by adding more pg/vg and nic. I have notice that very dark coloring liquids meen more flavour than I like. Sorry if my english is not right.

The only other thing i can think of is trying glass bottles to help keep out air when steeping.
Also some places sell a few types of nic salt, i have seen hit salts witch are supposed to have more throat hit.

Curious problem. Somehow i doubt it’s the nic level that’s the issue, especially given that those other two recipes turn out OK. You said:

Just to clarify: does that mean that you mixed and tasted them at the original level , before converting them/? Or did you just take other folks word that they taste good at 3/6mg ? If the latter, that would open up numerous other possibilities, such as the flavours just don’t work with your kit, flavours have gone bad etc

I tried to look these recipes up on this site, hunting for clues as to why they might not be working for you, but couldn’t clearly identify them, if at all. Could you post links?

I’ve tried steeping them in the fridge and still no luck.

This will slow the aging progress to a crawl.

As woftam implied , whatever the problem is, steeping in the fridge is not the answer. If the recipe is good, then steeping in a dark cupboard or drawer should work just fine, if not better.

Well, anyway, hope we manage to work this out! All the best

EDIT oops, just found your other thread re. this issue where you say :

also sometimes wonder if the heat would affect a liquid. Where I live it’s pretty much 25 - 40 degrees celsius in summer and not much cooler than that generally in winter. I leave my liquids in a dark cupboard to steep but it does get very hot in the cupboard on hot days.

OK, i see why you’ve been steeping in the fridge now!

That looks iffy to me. Nic oxidizing ends up red, any juice i have had go red ended up super rough.

Edit the one on the left that is other one not to bad.

yes, but then again if all else was equal (same nicotine, same %, same steep time etc) between the bad mixes and the good mixes, then it’s very hard to see how the difference could be due to the nic oxidising? Then you have to look at the flavours instead, seems to me.

That said, it’s not crystal clear that all else was equal.

The first three are recipes I’ve converted and have all oxidized.

The above two are my ADV’s that don’t oxidize at all and taste good until the last drop.

I haven’t tried the first 3 recipes at the original nic levels. I look at the ingredients and if they look appealing to me I’ll convert the recipe and try it out.

I’m starting to think it could be the flavours that are the problem… I buy from a supplier who decants them into bottles so I’m guessing they buy in bulk.

I’m starting to think it could be the flavours that are the problem… I buy from a supplier who decants them into bottles so I’m guessing they buy in bulk.

Hmm. Don’t be too fast to blame the supplier. There’s an awful lot can go wrong with flavours. eg some flavours work fine on one kit, but will scorch or on another kit; then there are differences in palate such that one man’s georgeous is another man’s blegh; then there’s shelf-life to consider…

speaking of which, how do you store your flavours? they can be every bit as sensitive to heat and light as nicotine is, unfortunately; and some mixers have come to regret storing flavour bottles on an open shelf where sunlight from the window can fall on them. Some of us store our most precious flavours in the fridge , if not all of them (but then you swiftly come to need a second fridge for your food, if you go too far down that road

In any case, it’s always wise to do a single flavour test for each of your flavours before using them in recipes. Yeah, that’s a lot of faff, and a “counsel of perfection” but it can certainly save a lot of ruined mixes and detective work down the road. Right at this moment, may I suggest that you SFT any flavours that are unique to the bad juices? Then you’ll know for sure if they’re responsible.