Today I’ll be looking at something a little different that should be in every coilbuilders collection, a resistance meter.
Though not just any resistance meter, a fancy one from the lovely folks at Geekvape!

This Geekvape was sent to me for the purpose of this review by Gearbest.com!

When people first start vaping usually the obvious choice is a tank with prebuilt coils.
But we all know prebuilt coils can get very expensive very fast and it also limits what can be done with the tank.
And while I fully understand that this is enough for some, most people start looking for cheaper alternatives after a while.
The next step is usually building your own coils…
This brings along another dangerous precedent which is called resistance checking, and that’s where resistance meters come into play.
There are some very cheap ones out there that will suffice but after a while you’ll want something a little more sturdy, like the Geekvape 521 Tab.

For those of you reading on a mobile connection, here’s a link to the gallery!

So why is this thing so important to have?
Let’s dig in, shall we?

The 521 Tab comes in a sturdy black box with the Geekvape logo on the front as well as 521 Tab in bright orange lettering.
The slogan of Geekvape is also portrayed and states “Geek knows better!”.
On the bottom of the box you’ll find all the specifications of the 521 Tab and a sticker with a scratch and check code to check for authenticity.
Opening the box reveals the 521 Tab stuck in a foam insert immediately, though there is some protective film on the front of the meter to protect it from scratching.
Lifting the device out reveals a spare batteryribbon, which is a nice detail. The Geekvape 521 Tab serves as a good safety precaution for anyone building their own coils and adds a bit of beauty to the process.
Of course there’s less to say about a resistance meter than there is about a mod, so you’ll have to pardon me for a somewhat shorter review.

The top of the device is a very shiny black plastic, and besides looking very pretty, it does have a small disadvantage; it’s a fingerprint magnet.
Regardless everything you need is on the top surface and you’ll find that it’s very easy to use. The rather big 510 connection is springloaded and has a goldplated positive pin.
Anything I’ve put on so far has sat flush on the 510, though it did struggle a little bit with a Velocity clone.
My authentic Velocity fit without any issues because the positive screws sits slightly deeper in the 510.
After a week of using the 521 Tab I had one problem that is a bit of a dealbreaker; the 510 came loose and I had to reattach it by opening the device and pressing the ring back into place.
The 510 is pressfit in the device and the ring does have the risk of loosening when it heats up a bit.
It’s an easy fix though, after the ring was back in place and I dropped a small drop of solder on the ring and 510 to hold it in place. Glue would probably work too. Just beneath the 510 connection is a display that is nearly made invisible when the device is not in use.
When you turn on the 521 Tab the display lights up in (Geekvape) orange, which is actually rather pretty.
It displays 3 characters, and does have support for errorcodes, which incidently are printed in silver lettering on the top for easy reference. To the left of the 510 is the firing button.
A small and subtle plastic button with excellent tactile feedback.
When you fire the coils on the device the display will show the actual resistance, which can be very handy with TC capable coilbuilds as they tend to change while firing.
With regular builds the resistance will usually stay the same.
Of course the device can be used as a platform to dryfire and adjust your coils, but it doesn’t have any regulation in terms of poweroutput.
It will fire between 31W and 33W maximum, depending on the strength and charge of your battery.
This does mean bigger builds, or exotic builds like fused claptons will take a bit more time to heat up. That brings me to the bottom of the device which is fully removable.
The cover has a notch on top and bottom for easy removal and is held on by magnets.
It also has antislip rubbers on the right and left side ensuring the 521 Tab is kept in place when you’re working on a build.
In the middle of the cover is some silver lettering stating the measuring range, lowest firing resistance and the link to the Geekvape website.
Removing the cover reveals 3 things; the battery compartment, a sticker with all the specifications of the 521 Tab, and the magnets and screws holding everything together. The batterycompartment is a simple 18650 cradle and sits fairly deep.
The battery clamps are strong but tend to be a bit difficult. You’ll have to put the battery in aligned instead of slanted.
Batteries with a buttontop will likely not fit due to the limited space. The accuracy of measurment is pretty spot on, though the display is limited to only 3 characters.
I tested a few builds on several devices (including 2 DNA200 mods and eScribe), with a multimeter, and on the 521 Tab.
While some of the mods showed a slightly higher or lower resistance, the multimeter gave a benchmark for the coils and the 521 Tab was correct.

Overall the Geekvape 521 Tab feels rather luxurious as a resistance meter, but it does have its merit if you build coils often.
It’s not cheap compared to the basic resistancemeters but offers a few more options and honestly looks a lot better on your desk.
The ability to dryfire and adjust coils while building is a definitely handy and adds a layer of safety to the process.
Would I buy another one of these if this one broke? Probably.

In closing I would like to thank Gearbest.com for sending me the Geekvape 521 Tab for review!
Thanks for reading, join me on my next review for a look at the Hohmtech Hohmwrecker G2! It’s all kinds of exciting!

I’d also like to point out that Gearbest is currently celebrating their 2 Year Anniversary and that means large discounts.
They’re currently having flash sales, and there are definitely some good deals to be done.
For example the Noisy Cricket is at €17,51, the Joyetech Cuboid at €31,39, the Youde Zephyrus V2 at €18,71, and many more.
So if you’re strapped for cash but still want a nice mod or atty, I’d suggest having a look! The sales will be over on the 25th of this month.

SirRisc disappears in a cloud of banana milkshake scented vapor

Another great review brother. Got’s to get me one of those now i build my own ‘fancy’ coils.

I’ve been using one of these since the start of the new year and can say, I wouldn’t be without it for a day; sleek little meter! Kinda wished they had installed the more ergonomical rocker switch for the ohm/off/fire, but, that’s a first world thought on my part. I just like the switch they have on the larger version on the 521 Tab meter.

Nonetheless, it’s a great little meter; the less real estate a tool requires on the work surface, the better. I’d highly suggest this meter to anyone looking to upgrade from the $10, 2x3 w/ AA battery version!

I have a couple of the Coil Master [v2] since last year, when they were like hen’s teeth to get.
They make building coils SOOO much easier.
One stays on my desk with a KP long barrel on it for testing flavors.
Although you can’t adjust the wattage for firing, they still work great for a table mod.
Comes with test leads [continuity] and an adapter to check voltage on mechanical/regulated mods. 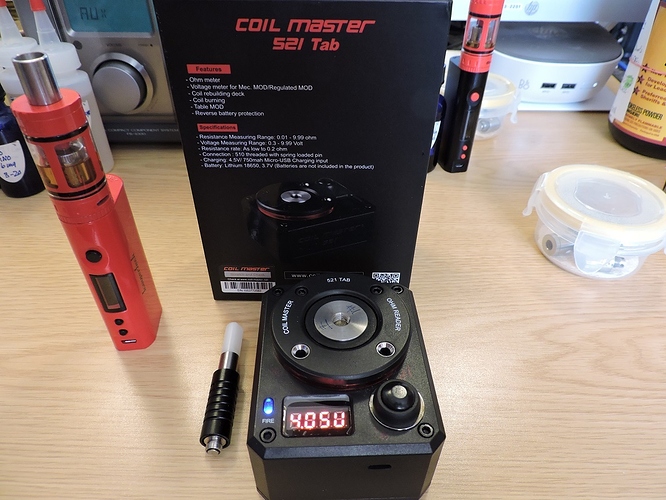 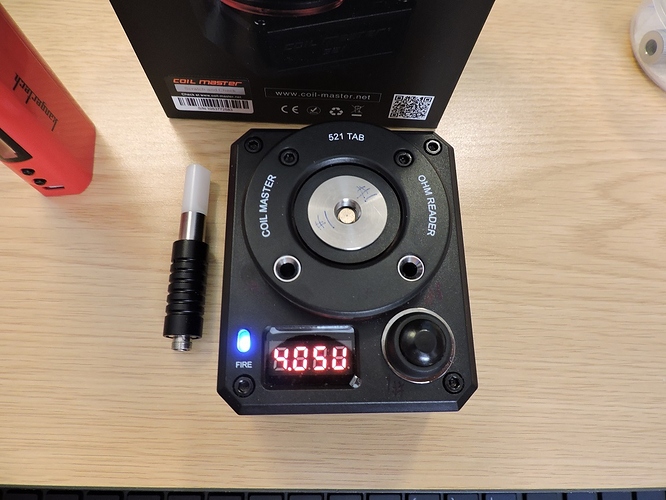 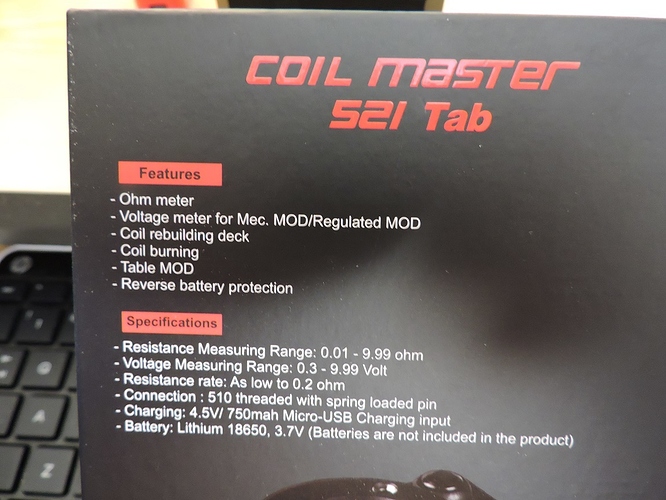