Geekvape Zeus Dual RTA review by Mjag...Better than the original?

Thank you for taking the time to view my review of the Geekvape Zeus Dual RTA which was sent free of charge by www.healthcabin.net for the purpose if this review. 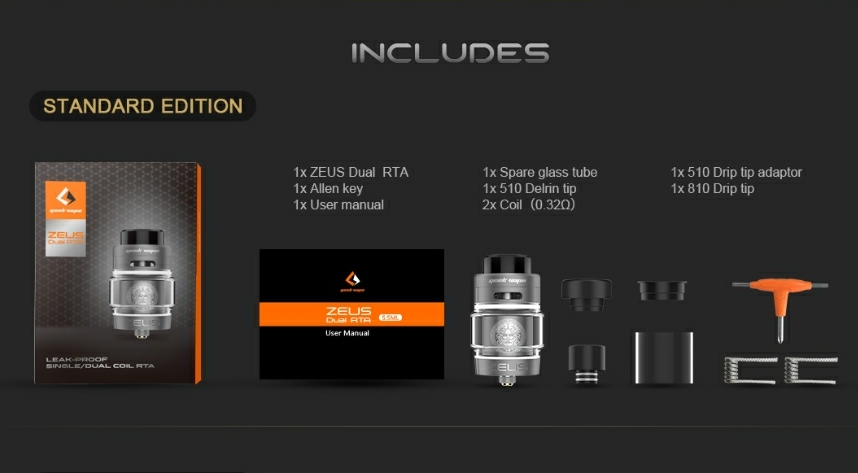 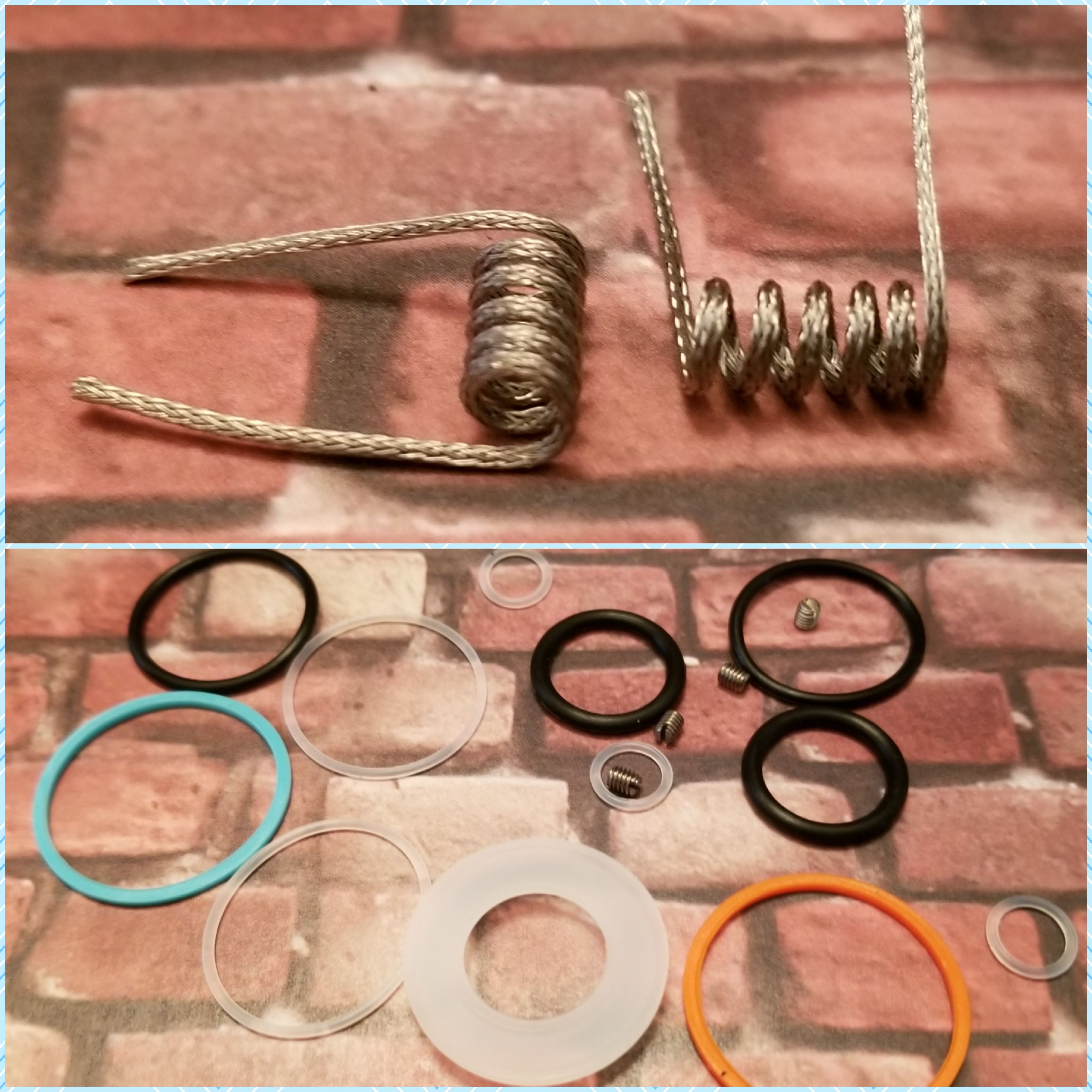 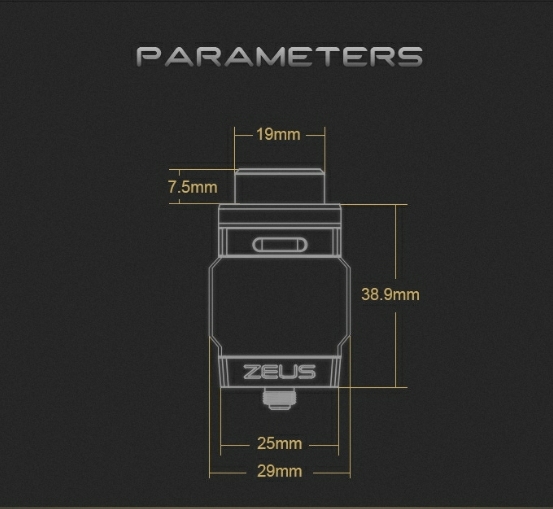 TkaVOcm.jpg553×509
This is for the bubble tank edition, the regular edition is 26mm at the glass but tapers down to 25mm

Getting to know the Zeus Dual RTA

The original Zeus was a single coil tank so Geekvape went back to the drawing board to make a dual coil version that we have here. Not only is it now dual coil but they changed the airflow, instead of coming from the sides and bottom it is not more of an angled side airflow meant to come from the side or under the coils depending on your coil placement. Still a postless deck but the mounting holes have been repositioned so that wide builds won’t get that dreaded twist the original Zeus single coil would do.

It is a little wider at 26mm with the standard 4ml glass which tapers down to 25mm at the base. A little taller too but as you can see not by much. 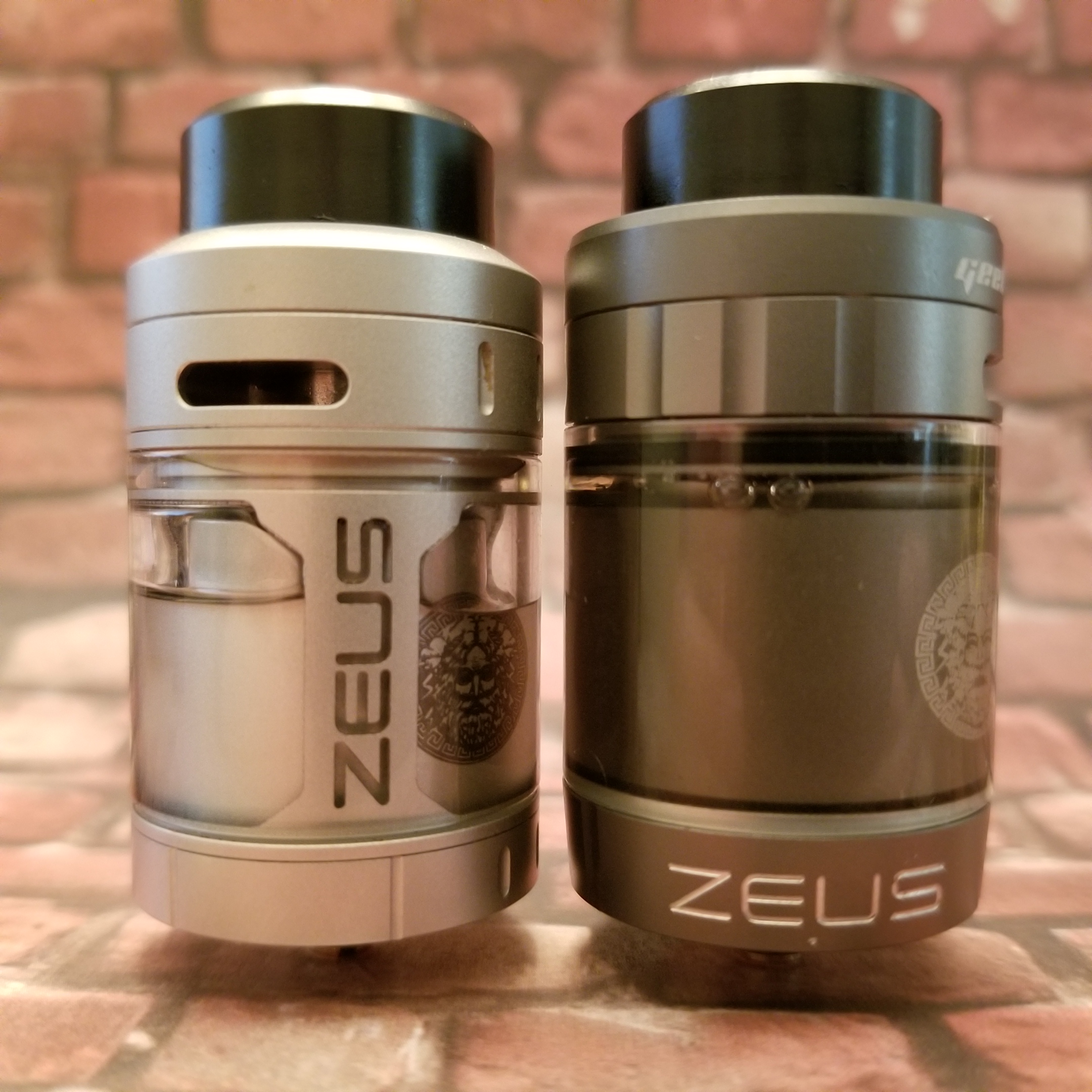 Loses the cage that was near impossible to line up the logo on the barrel so it wasn’t behind it. What did stay the same is the raised portion on the top cap, wish they would have made it flat as a lot of 810 drip tips are not going to sit flush like my example below. 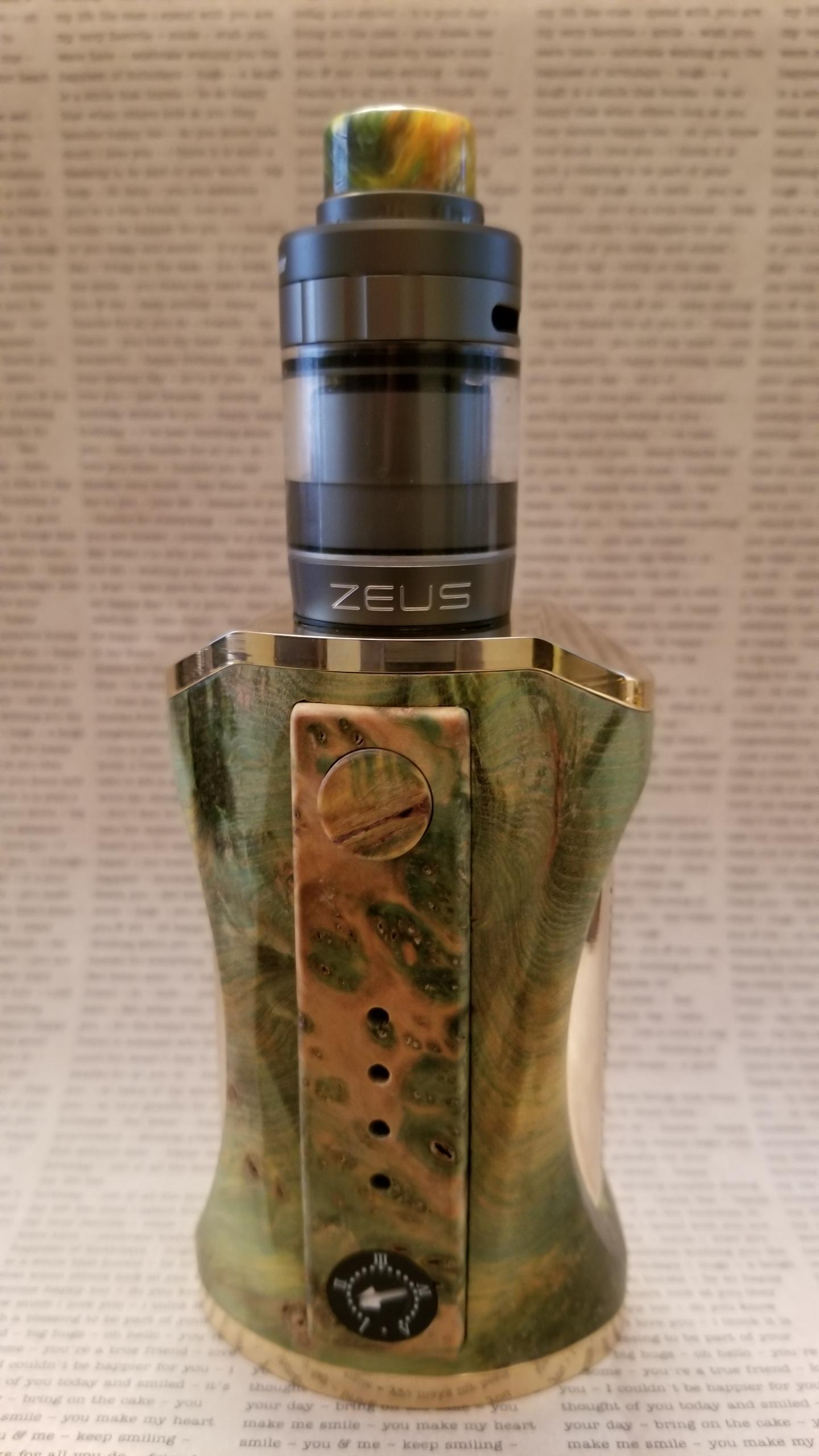 I know a lot of people hate slot grub screws, @Letitia your not gonna like this. Comes with slotted grub screws on the deck and the spares are slotted as well. Would have been nice if Geekvape would have included normal hex screws as spares to give people options but that is not the case. I will say the slotted grub screws included are of high quality, haven’t stripped one in 6 to 8 builds. 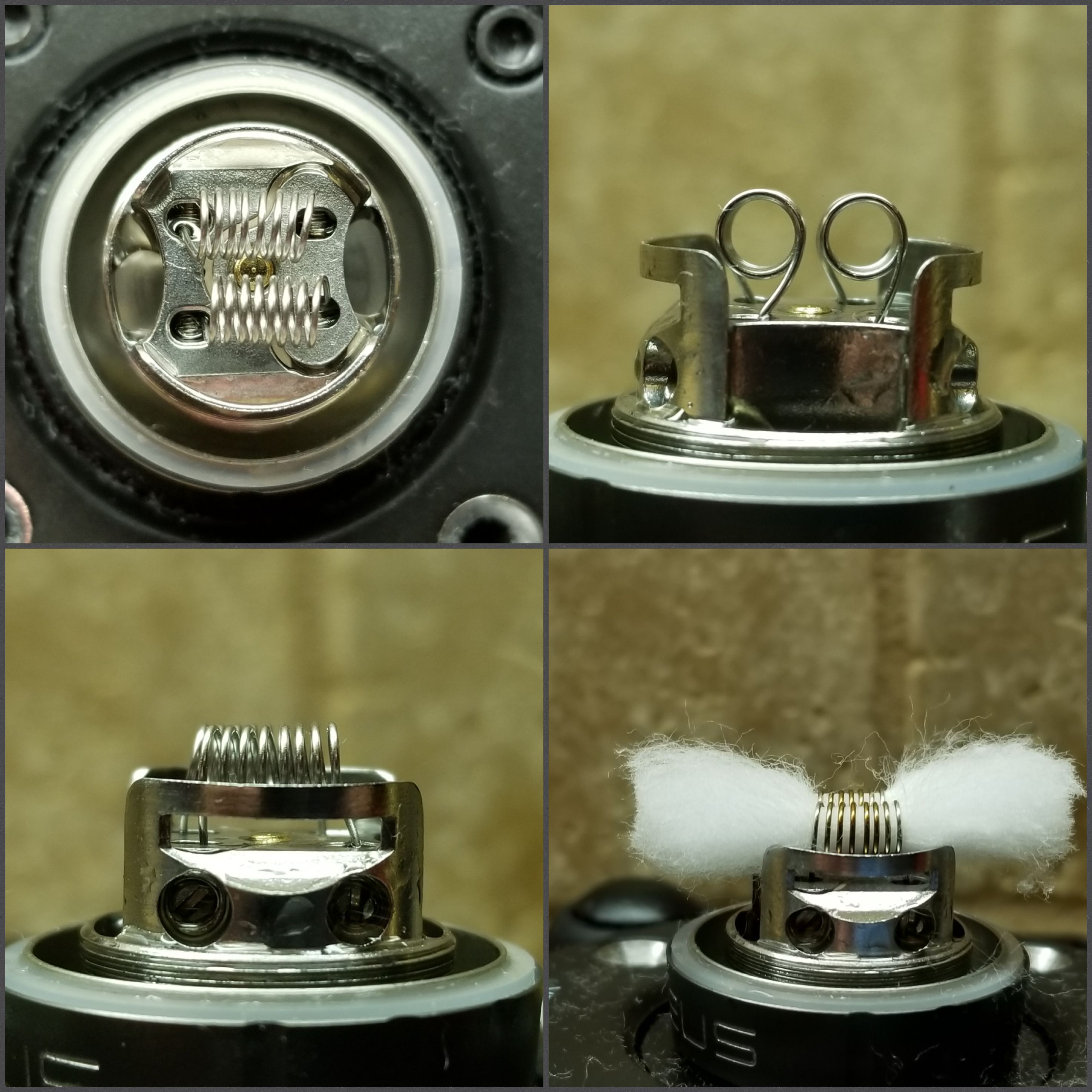 Meh, not so much with this build, it was the worst of the bunch and replaced the same day. The Zeus definitely likes bigger builds so if you enjoy builds like that then the Zeus Dual should be a pass. No problems trapping the leads with single wire though which can be tricky with some rebuildables. 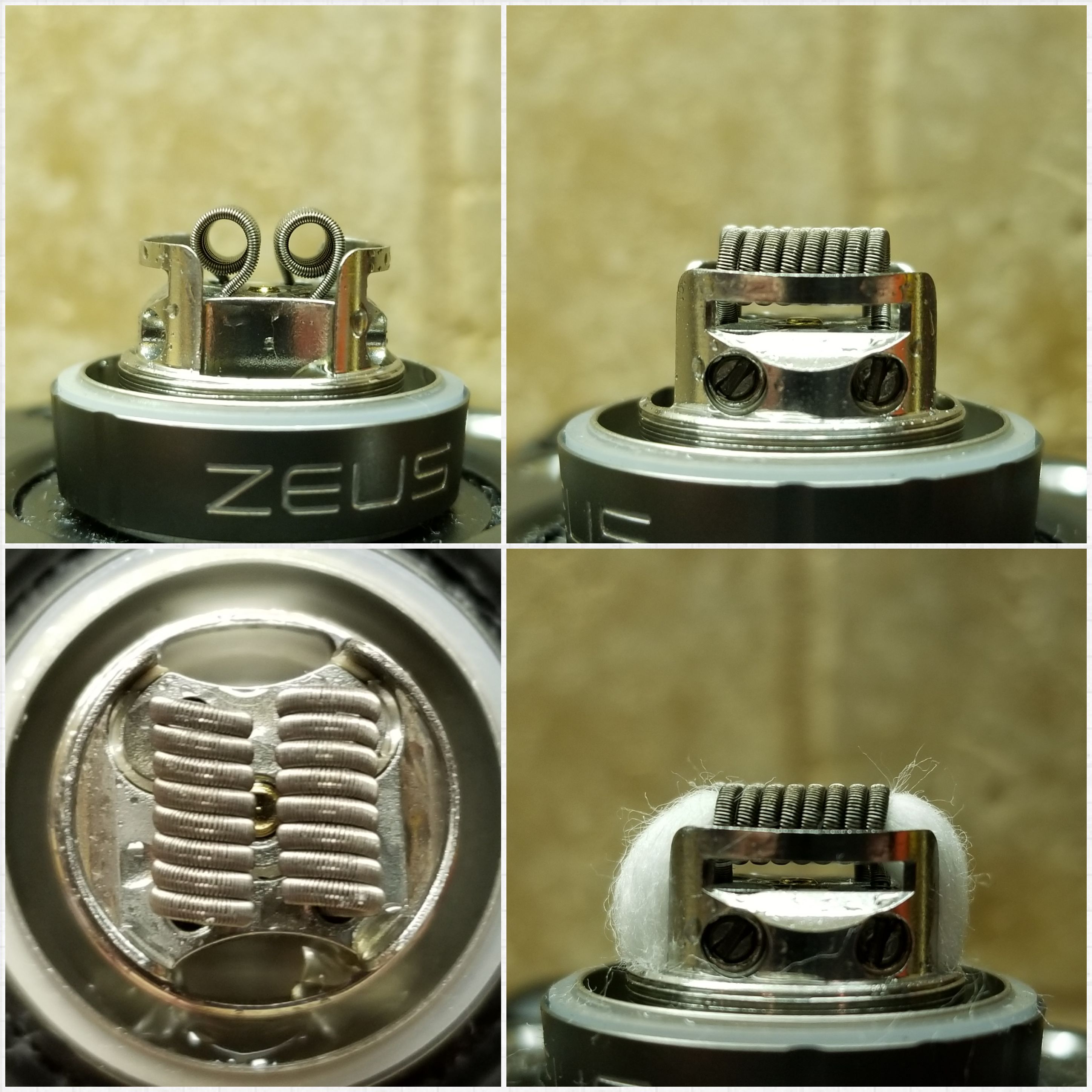 Better but notice that this is the build where I tried my coil placement a little on the low side. Wasn’t expecting great results but that is why you try, sometimes it will surprise you but that was not the case here. 2 problems with this build, inner diameter too big and coil placement too low. Pretty much forces the air to travel mostly up the sides of the coil. Flavor was lacking and the wicks had to be thinned out big time to avoid dry hits. 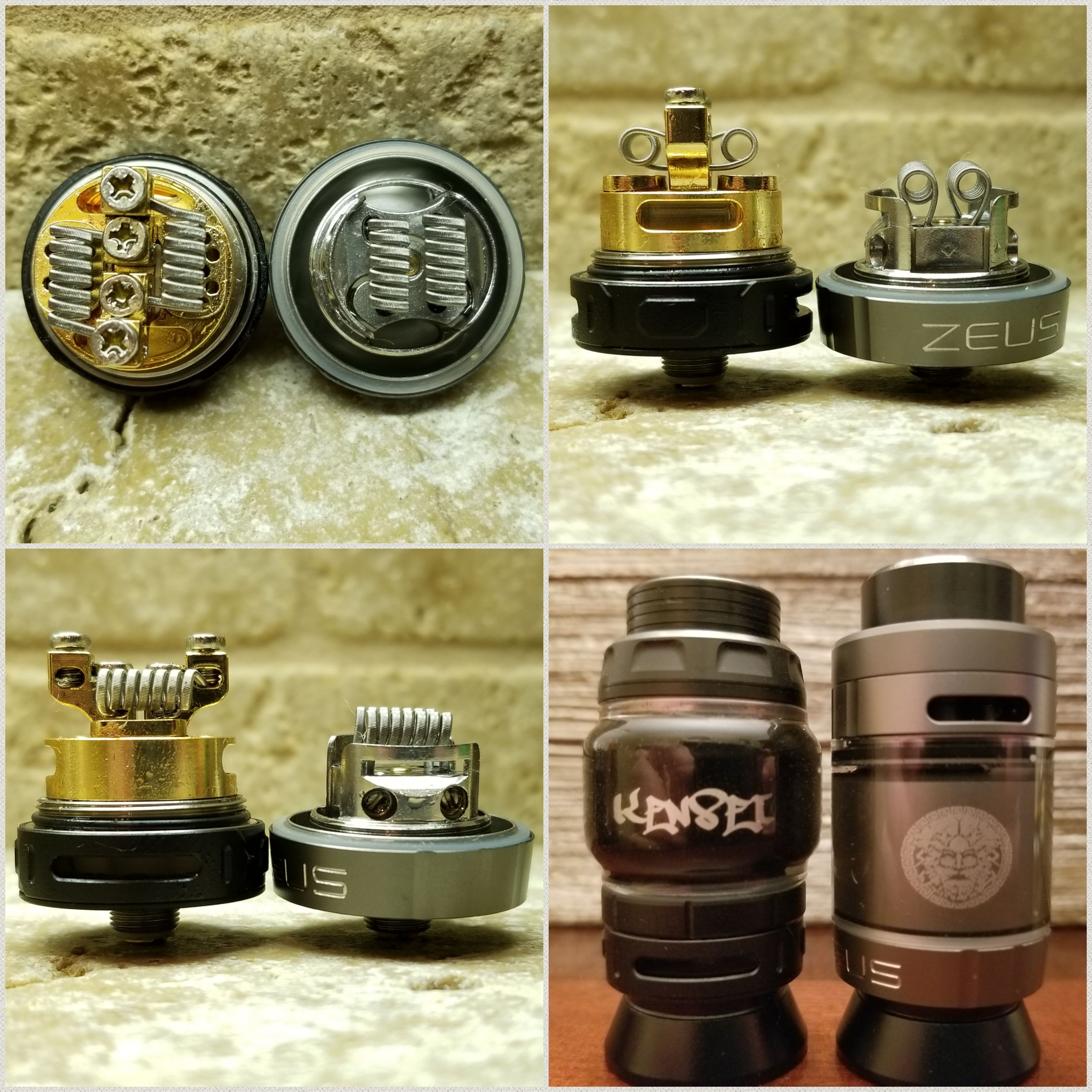 Now once I found which build worked the best for me I decided to do the same with the Kensei and vape them at the same time on matching mods. The smaller diameter of 2.5mm meant less wick to thin out. The higher coil placement and smaller diameter allowed the airflow to not only pass along the sides but also under and in between the coils. The flavor difference was pronounced and easy to spot.

As far as the difference between the Kensei and Zeus Dual for vapor production was about the same but the Kensei did have the edge on flavor with some juices, with others like an Apricot custard I leaned to the Zeus but more times than not the Kensei won out. Not a dramatic difference in flavor but I could usually tell which I was using without even looking. With the Zeus Dual it is all about coil placement and more importantly wicking, get the wicking wrong and the flavor suffers more so than most RTA’s.

Wicking that worked the best 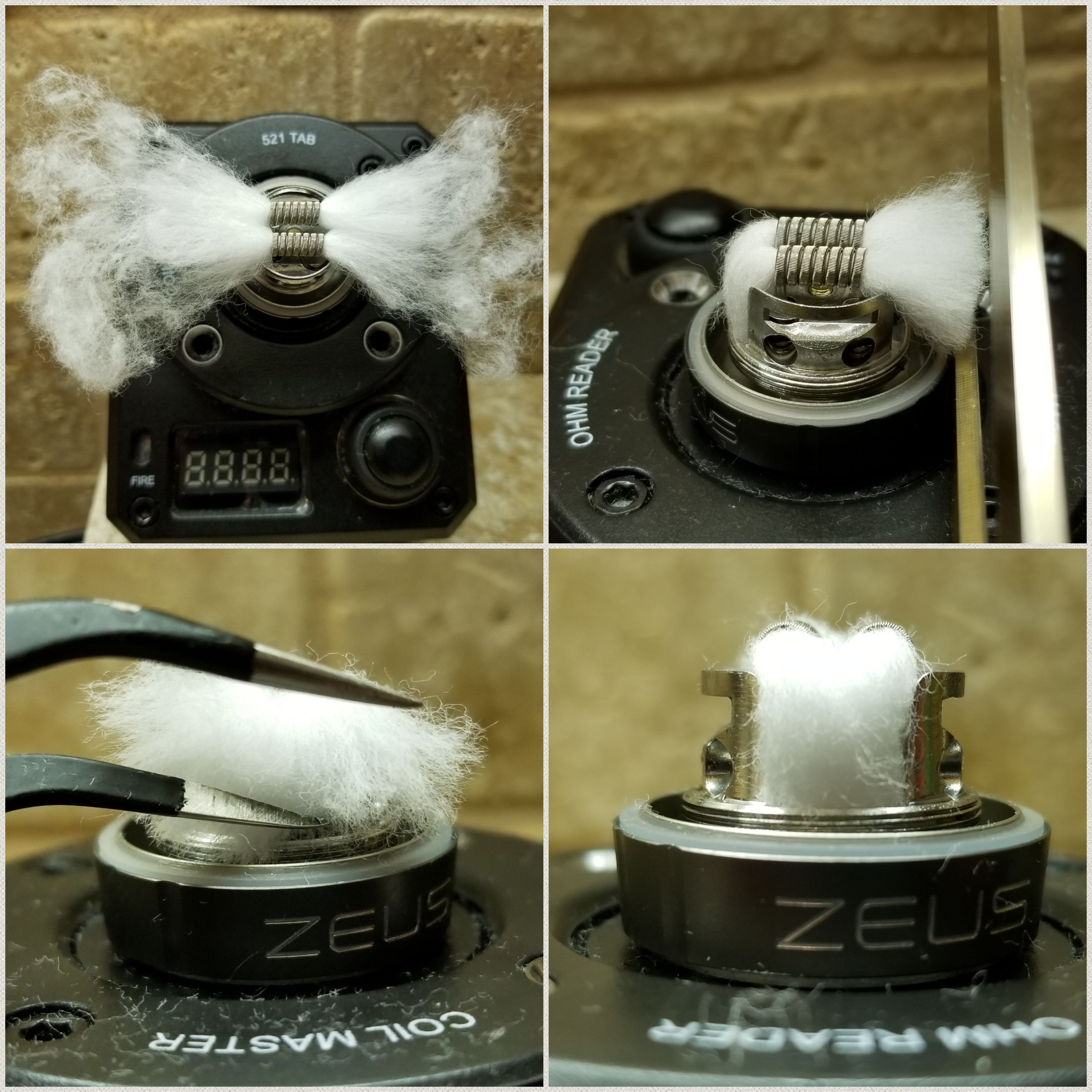 As you can see with my 2.5mm ID coils I thinned them out a lot. I then cut them about the edge of the base which placed my wicks so they barely entered the wicking slots. When you place your wicks into the slots make sure there is enough to fill it but not tight. Too tight or too long and your wicks will take awhile to fully saturate which in turn will lead to dry hits and a loss in flavor. I tried a lot of different ways to wick but this worked best, I could chain vape that at 85 watts all day with no problems.

Comparison to the OG Zeus in single coil mode 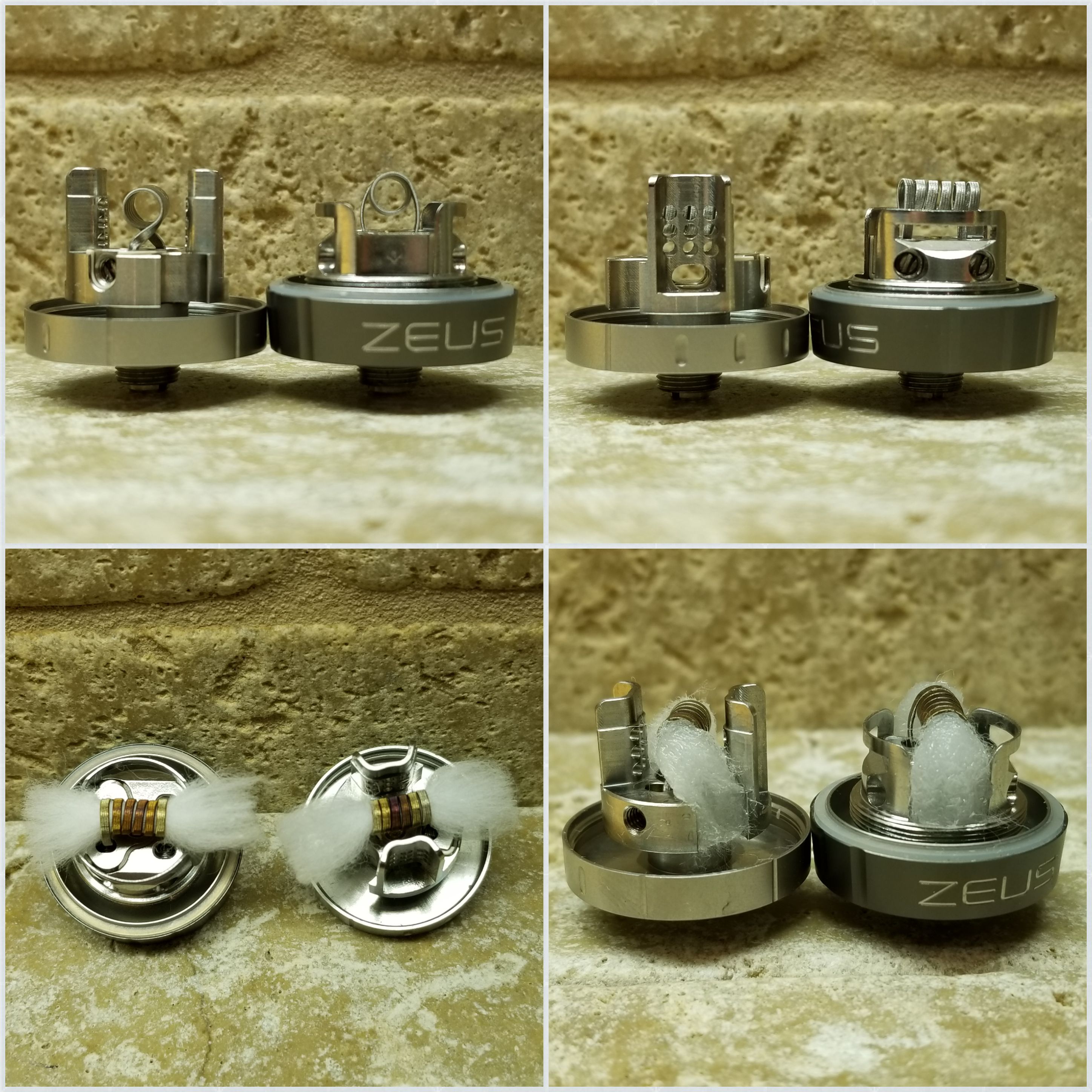 The original single coil Zeus can be a love or hate tank, after my review of the original I saw that was the case. I like it but you do give up some flavor for the benefit of no leaks. The OG can also be a bit of a pain to build on due to the odd coil placement and having the twist in your wicks. Not hard once you get use to it but it could have been better designed. The Zeus Dual so fix some of those issues, coils placement is much easier and wicking, while longer is more straightforward.

I build both using Quad core fused claptons, 30g core with 40g outer wrap. 3.5mm inner diameter which I have always enjoyed on the OG and that would also give me enough wick to fill up the rather large wick holes of the Zeus Dual. I always preferred my builds higher on the original so I tried to keep them at the same height.

Vaping both back to back using the same mods and juice it was a close call, hard to tell which was which but there was a difference. Sometimes I preferred the original more which surprised me but at no time did I say the Dual was superior. Being a bigger deck the Dual may have benefited more from a bigger coil, say 4mm ID. I never did try a bigger single coil, if I do and the difference is pronounced then I will update the review. I would say if you are into single coils and love the original Zeus the Dual will not be an upgrade for flavor in single coil use. It will be an upgrade in ease of builds but is that worth buying it? That is entirely up to you, I personally would not spend the money if I just wanted to vape with a single coil and loved the original Zeus. 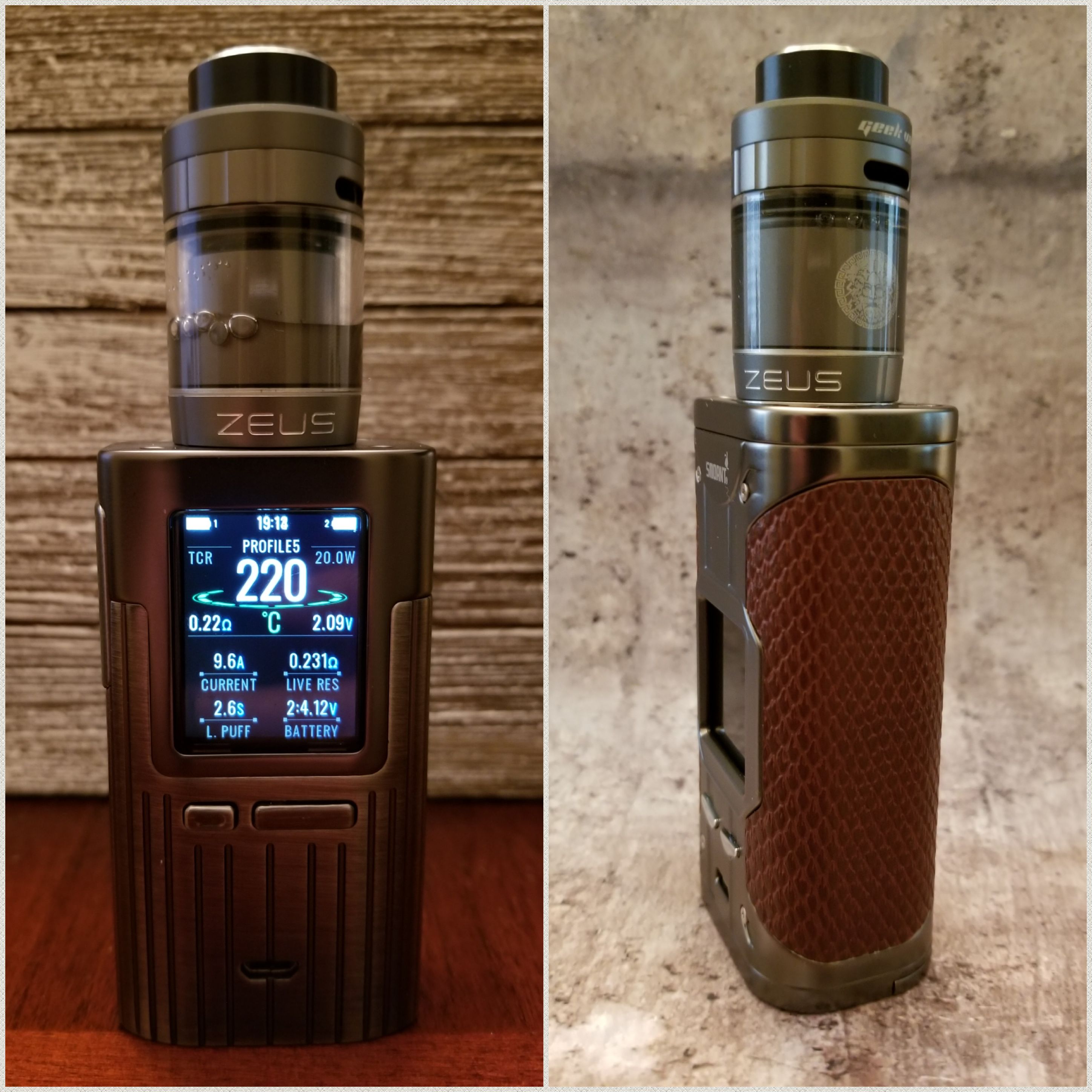 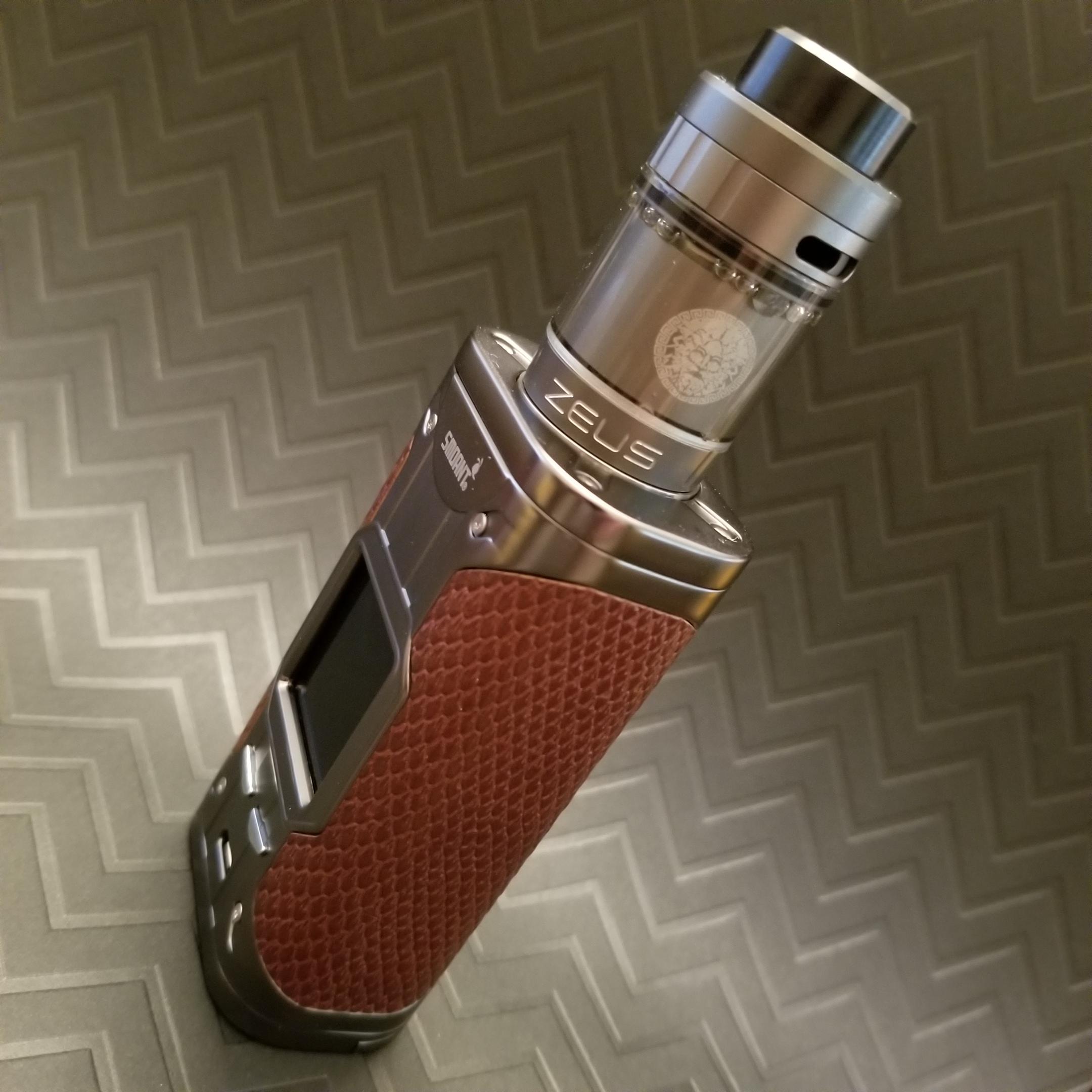 I am thinking I might need a black one, loved the combo with the Ehpro Armor 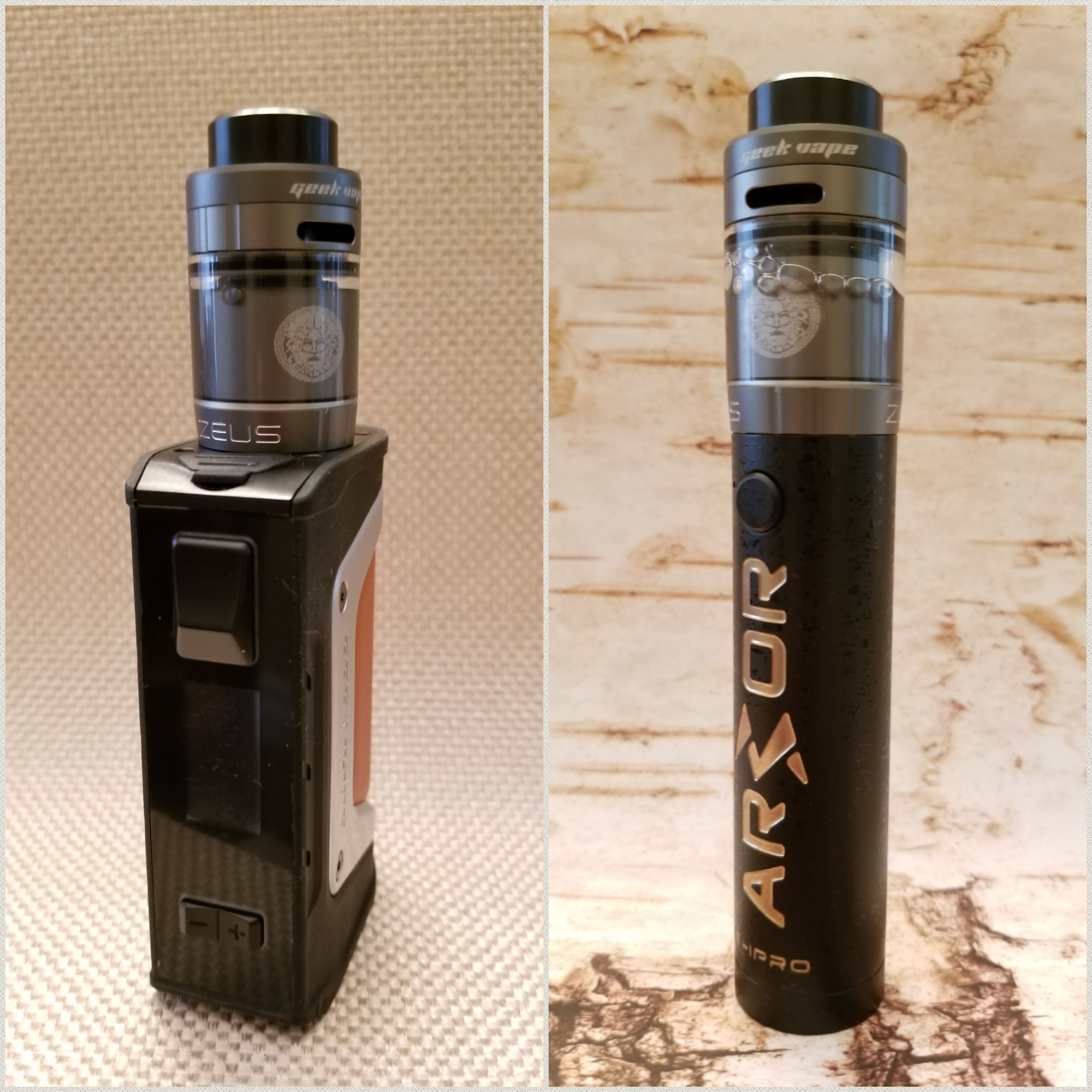 I liked the original Zeus, not the best single coil flavor RTA for sure but the convenience of no leaks made it a decent tank. The Zeus Dual is a worthy successor but does take some skill to get the best performance out of it, just like the original. It is easier to build on but the wicking is actually more tricky that the original. Once you get it right though the flavor is pretty good, just don’t expect it to be on par with the top flavor RTA’s on the market.

My one major con is no bubble glass is included, I have filled it up 2 times just writing this review. Geekvape must have heard the complaints as they now offer an optional bubble glass and it looks like there will be kits with the bubble glass included. I definitely need the bubble glass to continue using it, feels like everytime I pick it up it is empty again.

As I type this I have the Zeus Dual on the Ehpro Armor mod and am digging the combo with a 0.15 ohm dual build. I hate myself right now as it has me thinking of buying a black Zeus Dual and super gluing the 2 together…damnit, I always wind up costing myself money when I find a paring I like but need a different color…so not cool.

I want to thank Maggie and the fine people at www.healthcabin.net for being easy to work with and not bothering me for how long my reviews take. The review is done when I feel I have nothing left to learn. I don’t rush it and try to keep this fun as there is no money in it for me, the just satisfaction of helping my fellow vapers.

Loving the look of this, thanks for another great review

Sweet and hoping to be red too

That is a fine looking RTA
Thanks for sharing it with us and another great review!

I loved mine as soon as I figured out how to wick it.(less is more) I’ve had it for a month or so. I ordered the bubble glass from GeekVape (China) received it in 9 days. Not bad. 2 for $12.40 shipped, also not too bad.

I think your review is spot on. I’ll say this replaced my Kylin and the flavor isn’t as good but it’s not horrible. The Kylin leaked no matter what I did and the Zeus Dual hasn’t leaked a drop, not once. I’ll take the trade off.

I gotta order a bubble glass for it, thanks for the tip on where to get it

Good to hear when others have the same experience, it is something I wonder as I am writing the reviews so feedback is always great. Thank you.