I love the V1 of this tank, i didnt mind the condensation on my mod nor the bottle fill. The V3 comes with a Velocity deck and new air flow base. Some pics for your enjoyment.

[Album] Imgur: The magic of the Internet 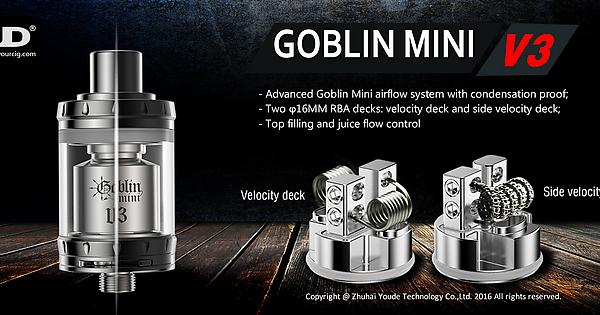 I KNEW IT! They just HAD to convert to a 2 post! I was wondering when this was going to come about

It almost looks identical to a billow v2

I know some dont like the velocity deck, im not looking at you TRW, but im a pretty big fan of it. Ill take two please.

Available yet?..Where.?..My go to is the Goblin Mini V1…never got a V2…Would certainly love to add this to my portfolio…

Been jonesing for this bad boy myself! When will it be released in the U.S.? ANYBODY??

So a few preview units went out to reviewers, but after discovering a leaking issue, production was pushed back to rework something. I have a pre-order in at FT that now says is supposed to arrive (at FT) tomorrow. If that comes to fruition, I’d expect to see them show up in the U.S. in the next couple of weeks. BTW, one reviewer received a second one from Youde, and the leaking issue was resolved.

Much obliged for the tip Sam!

does it still have the grub screw bottom fill?..

Nope. V3 is top-fill, and bottom airflow has a plate underneath now so no condensation directly into the pin. Also has juice flow control.

Out of the myriad of new tanks on the market, the Goblin Mini v3 has been the one I’ve been longing to see released and purchase. Let us know how you like it!

It should be a flavor chasers dream.

I like the fact it comes with 2 separate decks, for dual and single coil setups, instead of an airflow hole plug like the previous version. Just wished it came with the tank extension to boot, rather than it being a separately purchased item.

Oh well, can’t have everything…where would you put it!

Alright, so I’m vaping my Goblin Mini V3! Some quick notes:
Cellophane sealed box. Spitback valve was with the spares, so didn’t have to unscrew that (I’m keeping it out). Everything looked really clean, but I washed it all anyway in hot soapy water. I quickly swapped the clear top O-ring for a red one. One note, there is a thin, black O-ring around the deck area that can fall out. My popped out while rinsing, but fortunately I saw and caught it from falling down the drain. Rather than going straight to a dual Clapton 3.0mm build, I decided to start simple to see how much room I’ve got in there. I just did 10 wraps of 26g Kanthal around 3mm. Ohms out to .64Ohms. Of course, the Velocity style deck is super easy to install the coils. The allen wrench that came in mine had a slight bow near the tip, making it not spin too nicely. I used the short end instead, which meant reseating the wrench every 3/4 turn. For wicking, I just rolled the cotton for a slightly snug, but not tight fit, and trimmed the ends at an angle (longer on the bottom). Using my tweezers, I careful tucked the cotton down into the channels while trying to not pack or stuff too much. You really have to get the tweezers perpendicular to the deck to clear that outer ring around the channels. Primed it with my Bawlin Berry (which is also in my Zephyrus V2 tank). Closed her all up, closed the juice and airflow, and put about 1mL of said juice into the top. As I was screwing down the top, I unintentionally opened up the juice-flow (it turns the same direction), but nothing leaked out. Opened up the air and juice, and gave it a vape. No leaks. With the airflow wide open, it’s a nice smooth lung hit - doesn’t feel very restricted. At 44W the flavor was about on-par with my Zephyrus V2, though I can taste the custard a bit more. The Zephyrus is loaded with Dual Claptons, 6 wraps around 2.0mm, .52Ohms, and I run it at 52W. So, once I throw Claptons in this baby, I’d expect it to outshine the Zeph. Let’s talk about drip tips:
The chromed tip is very small. I knew it was smaller, but I mean, you feel like you’re about to inhale the entire tank. I did try the tip from my Zeph, which is taller, also rifled, but with a slightly wider bore. It fit fine, looked fine, vaped fine, and gave me back some personal space. So, it’s an option.
I decided to try the weird black condom/drip tip. I didn’t think I’d like the look, but as you can see from the photo, with the black Mod and red O-ring, it actually looks pretty good. Now I’ve loaded it up with one of my sweeter, but more subtle juices and I’m tasting the lemon and Dulce de Leche nicely (I couldn’t really taste those in the Zeph). So far a happy camper. I’ll post more as I get more familiar with it. And to clarify, not a single drip, leak, or dry hit so far. 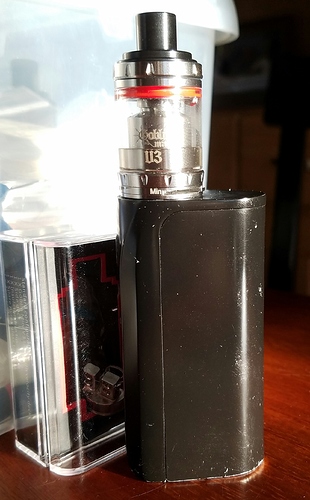 And yes, it looks much nicer on my little single-battery mod than that Zephyrus tree-trunk (6mL capacity).

One other note: The drip tip engages with the cap AND the chimney top so, once you unscrew the cap, it needs a little tug to come free.

I get the feeling this one is going to give my other flavor attys a black eye! 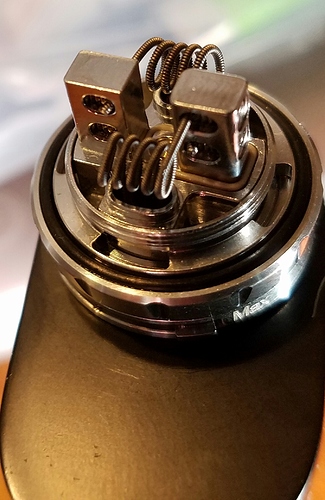 And WOW. Big flavor boost, of course. This is definitely more flavor than my Zephyrus tank with dual Claptons, also at 55W. I’m a happy camper. I was more stingy with the wick in the juice channels this time, and still no leaks or drips. Chugs through those 2mL in nothin flat, though!