Absolutely and it is my preferred method of vaping. My most enjoyable vape to date is around 0.18-0.22 ohms at about 115-120W. Most.Incredible.Flavor.

Absolutely and it is my preferred method of vaping.

Def agree with you there…

Thanks! I’m checking it out now!

From a trusted vendor in the US ecig might have the lowest price for the Therion: http://www.ecig.com/lost-vape-therion-dna75.html

Edit: I just realized you are the one that gave me the code for ecig…lol

30% off sitewide sale at http://www.ecigavenue.com
until August 7.

Shipping is FREE on orders $50 and up.

Also, the 40% off eLiquid sale is still active FWIW

Wow I can’t believe I missed this on they’re website! It’s a toss up now between them and myfreedomsmokes.com with coupon code vaporjoe13 and the points I’ll get and use. I’m going with mfs only because I know I’ll get it sooner and the extra points I’ll get. I got my total down to $106.12 because I’m using $5.20 in points

I got the Triade and love it, was really tempted by the Therion, love the look but already have a DNA 75 as well. There was a rumor Lost Vape was going to make a new Therion with the DNA200 chip to put out 133 watts with the dual 18650’s but with 8-8 just a few days away that’s probably not going to happen.

I will be so jelly but at the same time happy for you when you get that Therion, sweet mod for sure.

Sweet! Just picked a stainless one up. Ready to pair it with my Tsunami 24.

Too late but shipping was only $5.21 and I saved $3 with coupon code so I look at it as only $2.21 shipping. Plus from Oklahoma City to Dallas is very fast shipping.

If you were considering a Cuboid and a Griffin 25 top air flow (Combo) check this
http://www.cigabuy.com/joyetech-cuboid-150w-tc-mod-geekvape-griffin-25-rta-combo-silver-p-8641.html $57.03 above code may work

Sweet! Just picked a stainless one up. Ready to pair it with my Tsunami 24.

Sweet indeed. She loves it squonked up her bottom, and much better juice flow than the OEM girl. 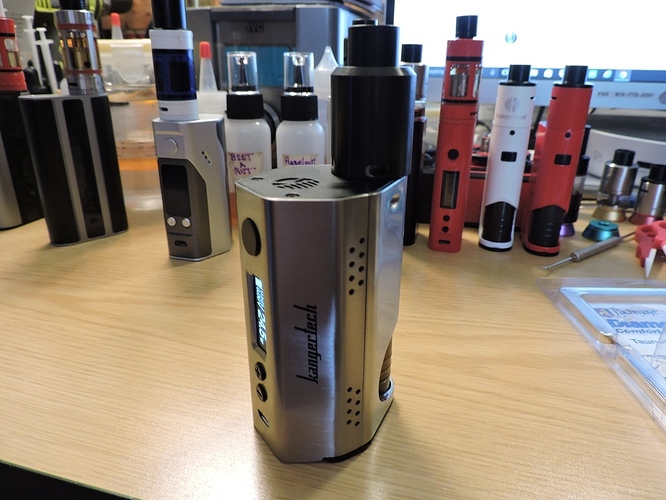 Should post this one under “What’s New” checkout some Pre-Orders on EFUN …cool new stuff coming in under the wire
Smok Alien 220W Starter Kit $42.99
http://www.efun.top/smok-alien-220w-starter-kit.html

What is the code for ecig.com ? or @ozo

This Tsunami looks really nice. Just ordered one and left a message to the guy that you referred me. Thanks Ozo!

@ozo
HOLY SH*T UNICORN ALERT The mythical Pink ring SSOCC STAINLESS STEEL wire Kanger coils are to be bought! NO ONE HAS THESE. These Stainless Steel wire coils are the only Kanger replacement SSOCC coils that can be used in TC beside nickel. They were only available as single coils that came with Topbox kits and weren’t available in packs. I left ya’ll some