I haven’t purchased a tank in over a year, so I’m out of the loop when it comes to new gear. Currently my top tank is the Boreas, but I’d like to know if there’s anything out there that can beat it for flavor output.

If you have or had a Boreas and it’s not your favorite… let me know what you’re using to top it.

EDIT… I forgot the tank I bought from WR, but it ended up TC issues.

The Reload RTA is my current favorite. The authentic is pricey but the clone from Fasttech has just as much flavor.

So you’ve tried the Boreas?

Yes. It’s a good tank but in my opinion not the best. Before the Reload my top pick was the Moonshot but it is a real pain to build. Another great flavor tank is the new Hugsvape Lotus. Wicking is critical but flavor is fantastic.

Another great flavor tank is the new Hugsvape Lotus

Based on what was recommended to me, fotoon aqua reboot is just there with the lotus.

I’m actually waiting for both to arrive

I have this one and it wasn’t that great for me.

Try to look at the HugsVape Lotus, it should give massive flavor. I havent tried it but i know some who has it and loves it and it also scored very good reviews. I know you might be skeptical about the unknown brand, i would be too, but it should be surprisingly well.

I have both the Boreas and the original Reload, Reload beats the Boreas for flavor, but IMO the Advken Manta beats them both, it also has more airflow than the Reload and is a lot cheaper.
I like a fairly restricted vape but the Reload is a little too restricted IMO.
The new Geekvape Creed RTA also has very good flavor, probably not quite as good as the Manta, but very close.

I want to try the Manta, too. In Germany it is the most popular RTA according to a guy in a vape shop. The only other RTA I’ve tried is a Billow v3 which was great for a week but then started leaking and I didn’t want to spend so much time fixing it.

I can strongly recommend both the Aqua Reboot RTA and the Dotmod 24mm RTA for flavour. I’ve got the reload, but its just a tad bit airy for my taste, and the speccs are pretty simmilar to the dotmod. Which again is just restrictive enough on airflow to beat the reload in a rta flavour contest, at least to my palette. However, all the mentioned are good vapes.

I just keep going back to my dotmod 24mm.

I have not yet tried the boreas, but I think that one is simmilar to the steamcrave supreme v2, which I have 3 of now.

Which also is a solid one…

but I think that one is simmilar to the steamcrave supreme v2, which I have 3 of now.

Which also is a solid one…

@Pro_Vapes I don’t have the Boreas so I cannot directly compare, but I would like to chime in on almost ANY of the Steam Crave lineup. IMO, they are so locked in to solid flavor production, I still use my very old 3ml v.1 for ALL of my SF tests and WIP tests. I also use a mix of Supremes and Plusses for my daily drivers. Flavor is paramount for me, and trumps all else for my vaping preference and I sacrifice nothing in that regard. NOT leaking is a close 2nd, and so on, and I’ve honestly never been let down by any of the SC lineup. I do not own the Titan however, so I cannot speak to that big honking beast. 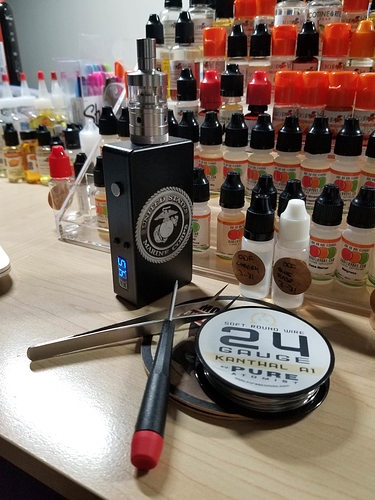 I too am a big Steamcrave fan, especially the Aromamizer Plus and the new Glaz RTA, but both the Reload and the Manta have better flavor.

Triple 28 V2 easily out performs any other RTA I have, including my Boreas and Aromamizers.

Triple 28 V2 easily out performs any other RTA I have

Tripple 8 ehhhh ??? What coils you running in that @nchris ?

simmilar to the steamcrave supreme v2

You’re right, they are very similar… both have the direct to coil side airflow which I find to create major flavor. I have both… I bought it and the boreas at the same time, but the Boreas has a much smoother airflow and was a little better on flavor production for me.

I’ve notice a couple reviewers mention this one in comparison to other tanks and this was being rated better in the comparisons, so I’m kinda leaning this way.

Just from watching reviews… this tank seems to produce major clouds, but it wasn’t rated as high as some other tanks for flavor production. It is a very interesting tank though.

If you close the airflow down halfway, it’s the best flavor from a tank I have gotten.

Huge fan of the Steam Crave Aromamizer Plus & Supreme. So much so, that now that is all I use. I have found the flavor production and simplicity of building on this RDTA to be unparalleled.

Huge fan of the Steam Crave Aromamizer Plus & Supreme. So much so, that now that is all I use. I have found the flavor production and simplicity of building on this RDTA to be unparalleled.

I have to agree with you @Mark_Turner. My coiling and wicking utterly sucked when I first found out about Steam Crave, but once I got that down pat, I’ve actually grown tired of buying other RDTA/RTA’s only to try them, and watch them gather dust on the shelf. I’m always on the prowl, but I’ve stopped buying every NEW, new super “flavor” setup. I don’t work for Steam Crave, own their stock, but I sure wish I did. When they started on with the MGS (Mega Glass Stack) that started to resemble a test tube, and/or the Titan, I didn’t feel the need to have that tall or big of a setup, and why ?? I’m still rocking v.1’s for critical testing !!!

I’m glad however that @Pro_Vapes made the post, because you (I) never know, what you (I) don’t know, and I’m all about the flavor. Always watch these threads closely. I’ve currently got a tripple 28 and a Lotus in my carts, pondering …