I’ve had the Griffin, regular 22mm tank and it’s been awesome. I mean there’s definitely cons no reviewer has ever mentioned. Like how it gets pretty juicy after a while in the airflow and leaks a tiny bit. (I’ve wicked it every way possible.)

So, one day I picked it up for the first time after not using it for a week and the chimney was stuck. Freezer method, put it in a vice, rubber bands, pliers, managed to get it off. This happened a few more times after using it, and then not using it for a week or so. All this has happened with a little bit of juice in there too. I don’t understand why it’s happening, I absolutely do not over tighten it or anything like that. Now, it is REALLY FUCKING STUCK on there. I’ve done fucking everything and I am so pissed off because it is USELESS. It’s like someone super glued that shit on there. Does anybody else have this problem? Also, I put a tugboat drip tip in the adaptor a long time ago, and it’s stuck. In there for life. Can’t get it out, unless I want to destroy the drip tip and adaptor. And it’s not like I shoved it down in there, it went in, snug, not comin out…ever. This tank is way, waaay over rated.

Anybody else have these problems?

Sorry for the rant, but god damn…

I’ve had the same thing happen to me on a few attys. I finally started rinsing them with water at least once a week and they stopped doing that. It’s like the juice gets a build up of film on there. And then stick like glue.

Might try soaking it in some really hot water for a bit.

I thought that I was the only one with this problem , I ended up throwing two out because of this.One stuck one day the other stuck the next.Sorry I can’t help as I could not solve the issue either.

Had this problem and was told to put it in the freezer for 30 minutes take our and us gloves with grip. This worked great. Also when you put it back together put a drop of juice on the o-ring and it won’t happen again.

Had this problem to and I broke the glass before it came apart.

I seem to have the opposite problem occasionally with the tank coming apart when I take the top off to fill it. Go figure.

Try heating it with a torch type lighter after freezing it. It’s what I do and it works. Be mindful of burned fingers though. Once you get it apart, put a light coating of chapstick on the threads and this will help but be aware petroleum will wear down o-rings over time.

Just had to do mine yesterday and it was stuck fast. Brute force in the end did it. Hope it doesn’t do it again of it’s in the bin it goes.

Exactly , Way too many good tanks out there to waste time with junk.I have owned several tanks but the Griffin was the biggest disappointment of any.
They have a huge following so they must work well for some.I am just happy that we have so many choices with more every day!

My thoughts exactly. Why bother when theres so much out there that’s better imo.

Indeed and thanks to the many enablers on here I have a couple of the Boreas’s headed my way to give a try.

Great choice. You won’t be disappointed with that purchase. Awsome tank for flavour.

I was going to say…whenever you’re in the mood to chuck some atomizers in the trash bin, let me know! I’ll send you a pre-paid USPS label to stick on that box of misfit tanks and you can ship’em to me!

There have been times when my Griffins have been a bit can"tank"erous, but I’ve always been able to separate the parts eventually. I feel your frustration though; I’ve thrown away a few tanks and drippers that have pissed me off so bad, I wanted to throw them through the nearest sheetrock!

Thank you all for the feedback and suggestions. This site’s forum is awesome, i’m glad i got a lot of responses and know some other people have this problem. But, like i said before, when i said i did everything to get it apart, i mean everything haha. It’s really a bummer. I just put it back in the freezer, it’s been sitting out for the last week at room temp, going to leave it in there for like 30 mins, then take a hair dryer to it and see if that works. If it ever comes off, i’ll use chapstick and make sure to put some juice on the threads. I think i’ll just take it apart when i know i’m not going to use it for a while.

Anybody have the Avocado tank? I love how it looks and that 24 has that new fill port, which is a huge plus. Thinking about grabbing one when they release the 24. If anybody has it, (the 22mm) let me know what you think!

Haha, I have an Avocado that his been sitting in the drawer waiting for needle tipped bottles to arrive before I even bother with it. It sits right next to an unopened Griffin.

Hey, I don’t put this on here often due to fear of being flamed. And use your own judgement here, but every new atty that I get gets the exact same treatment when I commission it. Open, disassemble and USC (or if I’m in a hurry soak and shake) in vodka. Then EVERY single o-ring gets a light coating of silicone plumber’s grease. It comes in little plastic pans and it typically used to lube O-rings in plumbing fixtures. I keep it in my kit for building attys.

Oh yeah, I also check to see if the “grub?” don’t know when we started calling set-screws “grub” screws, but anyway, I check to see if they cut wire and if they do I start filing until they don’t. . .writing this has me realizing that I should do that before the vodka soak But in my defense Ive only ever had one atty where that was a problem.

I’ve seen that avocado 24. That one looks like it will be a good one

This is certainly an issue because loads of vapers have reported it. It happened to me after 3 weeks of problem free vaping on a Griffin I go to remove the deck and it won’t separate, 30 mins in a freezer, x2 thick rubberbands later and I got them apart, it hasn’t happened again, now I’m always careful to open the juiceflow holes by holding the base and turning the tank anti-clockwise. Alternatively you could invest in one of these grip tools, but I have no idea if they work …

Probably the best deal for a Teflon + Ceramic Tweezers for E-Cigarettes USD 3.07 as of 1/25/2018 - Free shipping worldwide on all orders. Prices unbelievably cheap.

I didn’t really throw them in the garbage , I tossed them away in a bag in the closet.I am much to cheap besides I am an amateur hoarder at heart.I keep thinking when the vapocalypse hits I could turn them into a sweet RDA with nothing more than Reynolds Wrap and Mountain Dew bottle cap if in a pinch , MacGyver style!

I destroyed them sumbitches with anger in my heart and an evil grin on my face!
I started out innocent enough wrapping the first one with tape so I would not mar the finish with my trusty channel locks.Speaking of Reynolds wrap the chimney on a Griffin is almost that thick! It folded like a cheap suit.The second one I wanted to see if I could take my time destroying it! So I put thicker cloth on the chimney, only using needle nose pliers.Renyolds wrap IMO has a much higher tensile strength than the Griffin chimney!
I of course will add pics in case someone here wishes to doubt my assessment of the Griffin build quality.Hopefully you will be able to see the nice deep markings made by my trusty Channel Locks around the base.This is when the evil grin appeared as I decided this POS was not going to beat me!
I was victorious as you can clearly see it is in fact seperated.It matters not that it never would unscrew , imo the sight of it throwing the chimney up like bad tater salad on ten cent beer night is far more rewarding.If you squeeze hard enough in the perfect location it doesn’t have to turn.It gives it up like … ah nevermind there is that evil grin again.
Just let me know if you can use them! 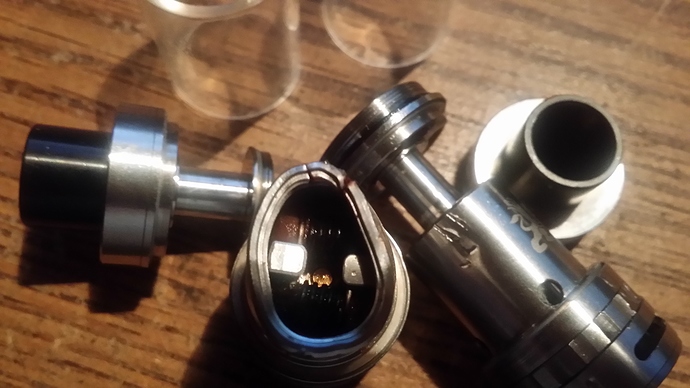 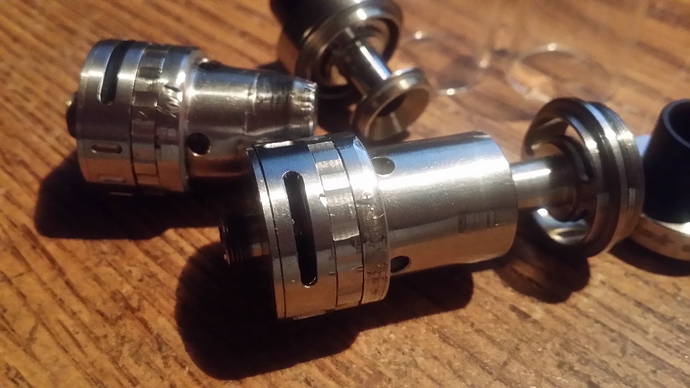 Errrmm…I think I’ll let you hang on to those pieces and parts.

It’s been a while since I thought about breaking out the channel-lock pliers on any of my atomizers, but sometimes ya have to do it!