Has anyone went through this?

As most everyone of my family here knows i got in a bad motorcycle wreck in april of last year. I had a metal plate put in my shoulder, titanium lol. Now as of today they are puttung a titanium plate in my neck and fusing c4 c5 c6 c7 togeather. Has anyone gone through this. And if you did. Was it worth it ?

I’ve no experience with this, but I wish you all the best, brother - and a swift and painless recovery!

I have personally known the pain ,as I have herniated discs at c4,c,5,c,6,a c,7 as well as chiari malformation of the cerebellum. I wonder if I will have to eventually get a spinal fusion as well. I know that there is different approaches ( going in anterior - throat ) or posterior through the back and seems like the most successful approach is anterior with healing time and not getting the spinal nerves involved. I wish you well and a speedy recovery. Physical therapy has helped my pain immensely.

I broke my neck in 2008 at c6 and c7. I’ve had both vertebrae removed and a cage connected to c5 and c8, bone graft from the right hip to infill the cage with my own bone. Butterss plates front and back for support.
I had no option to have this done because at that stage they gave me 4 mts to live.
However it’s now 2016 and I’m still here. A little worse for wear but still here. It was very painful,especially the hypersensitivity, but you get there in the end.
I really wish you luck, because i kinda have an idea of what your about to go through, and it’s not nice.
So best of luck my friend and i hope all ends well for you.

I havent but i wish you the best. The doctors have wanted to fuse a couple of mine and i have refused simply because i hate doctors and their witchcraft. I blew out my knee around 11 years ago and had a replacement and since then have had 6 more surgeries on it, I dont want to do through that in my neck.

I hope for the best outcome for you!

Sorry to hear that @sillyrabbit, I know that’s painful.

I have two ruptured discs, between L4/L5 and L5/S1. The vertebrae basically just grind against each other all day creating an unbearable amount of pain. I could hardly walk sometimes.

I had spine surgery in late 2014, Discectomy/Laminectomy to relieve pressure on my spinal cord (I call it my brain tail)

They wanted to fuse L3, L4 L5 and S1. I was concerned over fusion because once they are fused and become a single bone; all movement is pivoting and supported by the disc above and below the fusion. This creates a situation where those discs will wear out faster which means they will inevitably need to be fused as well. I did not like that idea…

I started researching “total disc replacement”, which I am convinced is a much better alternative and the science behind it has grown by leaps and bounds over the past decade. Sadly, I will eventually need three of these in my back but currently the (Fucking!

) FDA says you can only get a single TDR surgery. You can have more than one but not in succession.

It is possible to get several in a row but not here in the states. I believe the EU has already approved multiple disc surgery and one of the best places I found was in Germany but can’t remember the name of the institution at the moment…

I plan to fly there one day and have this finally fixed but I estimate it’d cost about 50-75K for the trip + surgery. Don’t really have that kinda cash laying around right now lol.

Until then… it’s Percocet and cannabis to help with the pain and spasms, too bad I’m all out of Percocet lol… (Damn DEA Muthrfuckers…)

Hope this gives you some options to consider/research, get well friend…

I did not realize there is a restriction on those surgeries. That is really awful. Especially being the one combined makes so much more sense. Stupid FDA and their regs messing up our live in many ways.
I say more cannabis less percocet lol but as a nurse I see marinol mainly for CA pt.s being prescribed ( helps stimulate hunger more than treats pain ) but here in the Pacific Northwest Marijuana is legal not just medical. I don’t partake but I do however agree when you can get benefits of nature for homopathic remedies by all means do so. I like the less is more approach for myself.

Havent been through this, but have had a ruptured disk. I can only try & imagine…
All the best…thoughts are with you for a speedy recovery!.

I had fusion of L5-S1 which is the lumbar section of the spine.

Ok, so prior to the surgery I had a procedure that I will never forget, I just can’t remember the name. All I know is it was some medieval, barbaric procedure that I still can’t believe I subjected myself to. Lying face down on an exam table (hard as hell by itself) they injected me through the muscle and into the discs themselves with a 10’ long needle that was controlled by a robotic arm. The technician was operating the machine and monitoring on a screen, so I think there was some kind of imaging equipment as well. They injected dye and they said it was for two purposes - 1, to force the disc to expand and mimic the pain I had been experiencing and 2, to observe for any leakage. This was torturous.

So with the problem disc verified I was scheduled for the surgery. I was told it went well. The first 48-72 hours after was the worst. I was in a turtle shell type set up to help immobilize my upper body. Recovery to the point where I was walking without much pain was about 2 weeks. It did pretty much stop the sciatic never pain I had endured, but it also brought on problems of it’s own. That surgery was in 2005. So nearly 11 years later and for the past 3-4 years I get inflammation in my lower back. Sometimes it’s substantial to the point I get sciatic nerve pain. It never lasts more than a day or two.

If you need the procedure I say get it. The alternative is chronic pain. At least post-surgery and recovery you’re likely to have more quality of life. 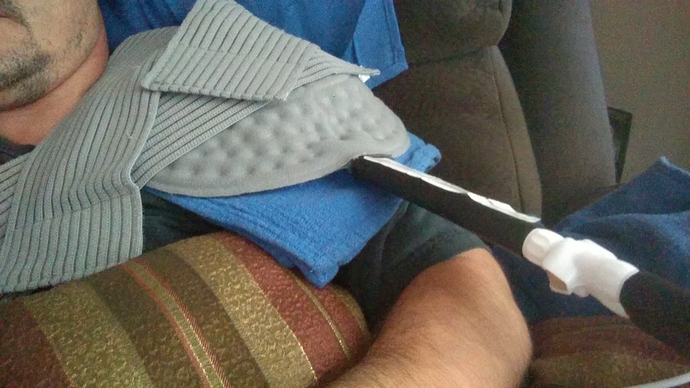 I’ve been off the Percocet for almost a year and it’s mostly due to cannabis. It’s funny how they call it a gateway drug but I know tons of people that used it to get off the Rx opioids including myself. Tried to ween myself off all the pain-killers they had me on but had some hardcore withdrawal symptoms and the pain was no joke. Spent 2 days curled in a ball on my bed soaked in sweat but freezing to death. Couldn’t eat or sleep and just wanted to die so I went back to the pill bottle.

On the next attempt I used Bud and stepped down my pain pills over the course of a week and never had an issue, few night-sweats but that was nothing. Now I’ve reduced my Bud usage to rare occasions when the spasms are really bad. Usually if I over-do-it at work.

It isn’t legal here in the South but at least they decriminalized it. Less than 1/2oz is only $100 fine misdemeanor. I plan to move NW asap, I would love to go to Puget Sound somewhere, absolutely beautiful up there, maybe in or around Portland OR is another place I’ve been researching.

Outch ,i feel your pain. Been there done that. Plus they put a titanium plate in my shoulder. I wonder if i vcan make a coil out of it lol

This. A good friend of mine had herniations as well, and once he started physical therapy he just became better and better - now he works out religiously (and train karate), and all is well with him

It’s funny how they call it a gateway drug but I know tons of people that used it to get off the Rx opioids including myself.

Plus it makes all your old 8-tracks sound like magic and popsicles never tasted so good!

Both places are Legal dude ! I am here and the Sound is breath takingly beautiful. Portland is an awesome city as well as Seattle.

I am from the south originally so I hear ya !

I can’t say I’m that healed lol but I can at least work now. Had a 30# restriction for the longest time. That would mean pediactric nursing which I AM NOT …Kids scare me LOL. I am spread the word when I can physical therapy helps ! Good share and thanks keep me wanting to become more physically fit.

Well I got off the stuff a long time ago myself (the herb) and now that I’m smoke free I guess it will stay that way. I have a buddy in Canada who gets an allowance as a vet of 5 grams per day, all paid for by the Canadian gov’t. That’s a substantial volume that I could never afford anyway, but if I could he would be the one I would get info from. Makes all kinds of things with it. Butter is his specialty. He uses it for all sorts of things. Personally, I wouldn’t have a problem eating cookies till I’m baked. Of course that cause and effect is backward from how I used to roll LOL

@Amy2. I did 16 weeks of physical therapy. And didn’t do any good at all. Injections don’t work on me. I wish it did.

I know it doesn’t work for everyone and that part sucks. Keep your spirits up and I’ll keep ya in my prayers. I feel for you.