Dear vapers, it has been a while since our last vape event. Do you guys miss Heaven Gifts? Personally, for me, I missed you guys quite a lot, your vape talks, vape jokes. Back to the topic, this time, the contest is about Geekvape Griffin RTA Tank. This holy beast caused a lot of envy for its great flavor and vapor production.

GeekVape Griffin RTA Tank is the first rebuildable tank with the biggest deck and Clapton coil compatibility, which means the tank room size is quite enough for most coil builds. A two post velocity-style deck with 2mm post holes gives you variable coil build options. Plus its convenient top filling, a fantastic vaping experience you may have with it.

However, we do have an extra bonus for this contest, that’s Griffin RTA Top Airflow Set.

As you can see from the pic above, with this set, the airflow goes cycle in the coil chamber so as to gain a better flavor of Griffin RTA. This is also a choice for who prefers to top airflow.

All in all, we prepare 1 set of Geekvape Griffin RTA Tank and 1 set of Griffin RTA Top Airflow Set to give away. That is to say, our lucky winner will get these 2 devices as a combo.

To enter this contest, just meet any of the rules below:

For Geekvape Griffin RTA Tank, some of you might find that it is out of stock in most online vendors, Heaven Gifts actually is one of the few has it in stock. If you will place an order for it, don’t forget to use the 8% off coupon code “AHGEVAPE” for a better price which is $33.12 US Dollars.


If convenient, please help us invite more vaping friends to join in.

where do we submit the entries for this contest? right here on this thread? 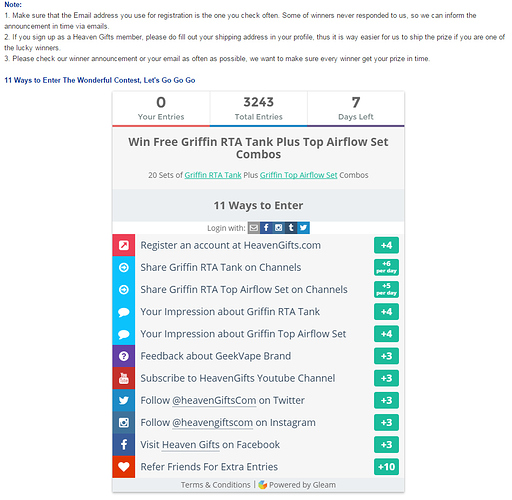 They usually just have you submit here on the thread

They run a separate contest on the page.

I’m gonna throw my hat in the ring on this one. So many people have said how much they like their Griffin. From what I have heard, it’s basically a Crius but with a bigger build deck. And who couldn’t love a company called GEEKvape

I’m really liking the Griffin. Most all of the Griffins features make for a great RTA. From the top down, the Griffin has been the most enjoyable and easy to use atomizer which I’ve owned; currently have four in a daily rotation.

The Griffin, with it’s two post design, makes installing a dual coil build quite easy. The ease of use, concerning the juice flow control, is great; comes in super handy when refilling the atomizer (i.e. no juice splooges out of the air intake holes due to deck flooding), just close off the juice flow and fill’er up. Cleaning this unit is a breeze; easy to take apart, clean and reassemble.

I’m satisfied with the amount of air flow the Griffin provides as it stands. However, I’m sure there are folks that will benefit from the new air flow design top cap; glad to give it a try should I win the giveaway.

In the end, the Griffin has replaced quite a few of my favorite RTA’s to date; well worth the money spent for this carefree atomizer.

The huge deck, the juice control…it’s so easy o build on and the flavor is right up there with the best. Can’t wait to try the new increased airflow top cap thingy!

Awe, that is nice of you and we missed you too!

I like the wide bore drip tip, the build deck is nice and big for my old hands to work on.

Thank you for the giveaway!

Hello,
As we said, we will select one winner just from here.
Below is another giveaway held on our site:
http://www.heavengifts.com/article/Win-Grffin-RTA-Plus-Top-Airflow-Set_354.html
You can join in both contests. More opportunities for win.

Hurry up and invite more friends to join us.
Good luck!

I haven’t tried the Griffin yet but it’s at the top of my bucket list.

I would be your best friend for life. I have heard so many good things about the Griffin and now they came out with a top air flow feature just like the herakles plus that is freakin awesome man.

I actually just ordered a griffin and can’t wait to try it. I love the size of the deck, I’m a noob builder and can’t manage a small deck. I’m so convinced I’ll love it that I’ll probably end up with 3 or 4 before I’m done!
Great giveaway, thank you HeavenGifts!!

Yup! It can happen! 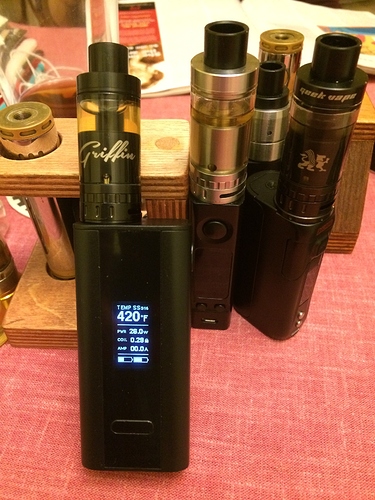 I’ve heard some very good things about this one and I’d love to try it. The build deck looks large enough to get a little creative with and the airflow looks interesting. Thanks for for the opportunity to win one and good luck to everyone!

Sweet!! I love the black one, that’s what I have coming. I’ll definitely need the silver too:)

I don’t have nor have tried a griffin yet but I have been looking at getting into building my own coils. I love tanks as I don’t want to be constantly dripping more juice. I started thinking about doing my own builds for an RDA so that I can more easily test my recipes without having to use my tanks. The more I read about building your own coils, the more I am starting to like the idea. So that had me looking at RTAs for a more daily use. The Griffin looks great and seems to have a nice build deck that would be somewhat easy to deal with for a newbie like me. Thanks for the giveaway opportunity @Heaven_Gifts. The Griffin RTA paired with the Griffin Top Airflow looks like a great setup!

Loving the black Griffin RTA on the Cuboid Mod @Kinnikinnick. That is a setup I am really wanting right now. Let me know how you like that setup.

Yes, we all missed Heaven Gifts!

I have a Griffin, and every time I fill it and use it after using other tanks for awhile it really impresses me with how much flavor it produces. I am one that likes a lot of airflow, and that is one thing I wished the Griffin had more of. So the new top airflow feature to me would be a great improvement.

I will be ordering the Top Airflow Set for mine regardless. I think that is a very cool design, and makes the Griffin very unique. I can’t wait to see how it works!

Griffin is a great rta, would love one with the top airflow set.