I have a favorite Gelato, called Talenti Sicilian Pistachio, and I need help to replicate the cream flavor used. You have to have tried this Gelato to really experience the cream flavor, eyeballing the short list of ingredients is not enough. If anyone has tried this, and you know of a cream that is comparable, that would be a great help. So far, Hangsen Italian Cream and Cream Fresh together have made a great substitute, but I just wanted further input to perfect the cream aspect of the recipe I am working on. Any help would be awesome.

Is it a vanilla type cream or more of a clear, sweet cream?

I have been loving FA Vienna Cream lately.

I read in the notes that fa custard makes a great gelato. I haven’t tried it yet (it’s out for delivery right now though, so I’ll have it in a couple hours and I plan on mixing with it today!) but it might be a super easy solution.

Maybe someone who’s tried it can weigh in.

I’m so stupid, I should have added this in, they have the Talenti brand at Walgreens, Food Lion, I don’t know if they carry at Walmart though. It’s hard to describe, not so much a flavored cream as vanilla, but it’s Pistachio, Pistachio butter, cream, milk, sugar for the ingredients. It’s a small, clear container with a brown top, just in case anyone wants to try it sometime, it really is quite fantastic. I’m just having a hard time nailing down the cream, which is sweetened condensed milk type flavor, but not quite near as thick or potent.

FA custard has a tinge of lemon in it just like the nonnas cake. Might consider that when you mix although when mixed with fruits, the lemon hint blends right in. Wished FA didn’t have to put lemon in their cakes and custards but they do.

Talenti is the small expensive gelato with with the brown lid right? I’ve gained a lot of weight eating that stuff and would really appreciate it if you would make us a recipe so we could vape it instead. This week would be ideal. Hurry! I’m getting really fat

Yes, that’s the one! And it is pretty darn expensive for the size that you actually get, which is why I don’t get it often. The Roman Raspberry Sorbetto has significantly less fats, and is a good swap for the Gelato (although there are several great cheaper sorbet options out there). If you’ve tried the Pistachio, it’s not quite milk, cream, and sugar, it has a condensed flavor and may be helped by the ‘natural ingredients’ that they don’t elaborate on. V-Mama, I don’t know if the lemon in the FA Custard would show up, but I can definetly give it a whirl in my small batch test. Thanks for the input guys this is helpful!

Yep, I mixed some up yesterday as soon as I got it. I tried a little (I pretty much always vape everything right away to get a feel for it, even if I know it’ll need steeping) and that lemon is definitely tucked in there. It’s pretty soft (as a snv at least) and it might get hidden by the pistachio, but it depends on the exact profile @Silhouette is going for. Unfortunately I’ve never tried the Talenti gelato so I can’t say if it’s close or not, but I’m pretty sure that FA custard will make a very nice ice cream/gelato of some sort at least!

I think that Hangsen’s different creams are often overlooked and under rated. They have a French Vanilla Ice Cream that IMO blows any other FV away. All of their creams has this distinctive dairy note that no other concentrate I have tried has. Their plain Vanilla concentrate is really good as well as several others I have been using frequently. Here is another flavor that they have and is awesome, Caramel Toffee and it is the bow that makes this recipe pop. 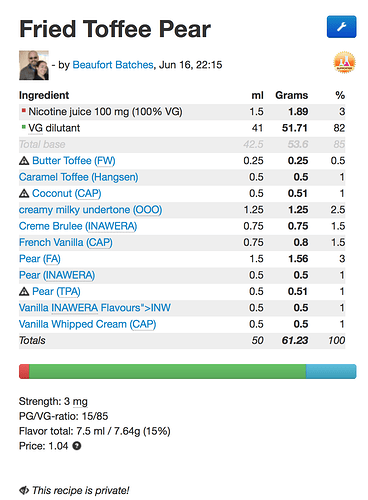 This recipe is something I wish everyone would try to see how delicious just 1 Hangsen flavor in a recipe makes all the difference.

I love love Caramel Toffee HS! It is probably one of my favorite concentrates to use. I have both Ice Creams as well as Italian Cream, and was actually thinking of using it for the cream base, and you just reinforced my idea. I agree they are highly underrated. Caramel Toffee is like condensed milky Caramel (to me anyway) that no other manufacturer has accomplished in the way Hangsen has.

If you eat a lot of that gelato in an attempt to make it vapeable, chances are you are gonna get fat as hell like me. It’s worth it

Is there something special about the “Vanilla INAWERA Flavours”>INW" or is that just a “labeling” issue??

A bit off subject, but I have tried this Gelato in other flavors and love it! I think that I got it at Walmart. It is the most Authentic store bought gelato I have had since being in Italy! I truly did not understand how different it is from ice cream until I had it there! Mind blown!! And the sad form of it they have at Rita’s Italian Ice, should require a different name, IMO!!

I am going to have to try a few of these in my next order. Thanks for the information!

It is delish! Uber rich though, so I try not to indulge too often, but I have a super way to burn those calories. My son’s boxing coach made this ‘thing’ you sit on and lean backwards to do sit ups in mid air, it burns like crazy but it’s been the absolute best exercise I have gotten, especially for the abs and the top of the legs.

I bet @Beaufort_Batches could assist you with the raspberry sorbetto. He makes the most realistic sorbet. If you were using one of his sorbets and I smelled it while walking behind you, I would knock you into traffic and take it from your pocket. Haha, just teasing but he does a fantastic job

I didn’t attempt the Sorbetto, I made a Tart Lemon Berry Cheesecake which to me tasted tart and sweet just like the Roman Raspberry, which is Raspberry, Lemon for the main flavors. That LA
Lemonade was the perfect tart lemon for the raspberry. I don’t use fruits often at all, but I like tart citrus every now and then. I wish I liked Strawberry, we have a lot of Strawberry concentrates that I just cannot bring myself to use.

Finally posted my Food Fighter’s Crack Pie Clone after a year of testing caramels, and finally finding it was Hangsen. After getting Italian Cream, I have a slight inkling that a Hangsen Cream is used as well, but it’s gonna take several batches to incorporate it correctly. Any more Hangsen flavors you recommend? I have wanted their RY4 for a while now.

I’d also like to know which others are reccommended, and any to stay away from. I only have 1, coconut. It’s nothing special, so, I never explored them anymore. Also, because I haven’t heard a lot about their flavors.