I'm over with RTAs

I’ve been vaping for almost 3 years. I took the same route many of us have taken. For the past 14 months I’ve been exclusively squonking. At night when trying new juices I’ll drip, but it’s been just RDAs. I love the simplicity of them.

So, just out of curiosity (and not buying any hardware over the past 4 months or so) I got a Profile Unity. I have 5 of the RDAs and use them everyday. I got the Unity a few days ago. I could not unscrew the chimney in order to put on the larger glass. I tried everything I could think of from putting it in the freezer, using those rubber things to remove jars, WD40 and asking my wife to do it. Nothing worked. Out of frustration I broke the glass. Then out of more frustration, I broke the top part of the chimney with a pair of pliers. Screw it, I thought.

Later that day I ordered another one. It was because I was pissed off that I got beat by Wotofo and some little fuck that twisted the thing together so tightly. So just this morning I get it. This one screws apart from the chimney as easy as you could want it to. That tells me the previous one was wrongly assembled, somehow.

So I happily wick it and then as I try to remove the topmost cap to reveal the filling holes, I can’t get it off!! The previous one unscrewed without problem, but this one is cranked on. Screw Wotofo and screw all RTAs, RDTAs, and every thing that closely resembles them. Screw everyone that makes and assembles them. RDA’s are so easy to deal with, I can’t understand why anyone would want stick with these 6 piece, glass breaking, mysterious wicking, ugly and massive pain in the assedness RTAs.

I use rta exclusively because I’m always have to be ready (on call). If I have to use rda, I would get large patch of liquid on my shirt or trouser pocket. And I didn’t like squonking because I got bored with flavors easily. I would always change flavor every tank fill (around 3mls now)

Dont despair, they arent all bad! Hehehe, I got a medusa reborn on sale and I love it, no glass, three parts and quite frankly just excellent. Its not the fanciest thing in the world but I like it, and I also am a squonker, I have a goon rda as well, but when Im going out and about I just want an extra lil capacity i screw on my medusa. Things made completely out of metal, so you’d have to really try hard to break it.

Today I ordered one of those fiddly si piece jobs with glass, haven’t got it yet, I may join your rant in a few days, but Ill still have my medusa to go back to

I’ve been vaping for almost 3 years. I took the same route many of us have taken. For the past 14 months I’ve been exclusively squonking. At night when trying new juices I’ll drip, but it’s been just RDAs. I love the simplicity of them.

Almost the same scenario with myself. Vaping almost 4 years, only recently started squonking and drip at home and sometimes out and about. It’s RDAs only for me these days. Thankfully I’ve not had too much trouble with tanks I must admit. What put me off was the hassle of different wicking requirements for each tank, their quirks and challenges.

With RDAs I find that wicking is a no brainer and virtually impossible to get wrong. Flavor is so much better and general ease of use and experience far superior. Some may beg to differ but that’s been my experience so far. I for one will NEVER go back to tanks, except for my Kanger Sub Tank Mini. Yeah, it’s an old piece of kit but seriously, that thing is idiot-proof!

Feel for you @natbone. When stuff like this happens it can get so frustrating. Sometimes to the point of too much anger and stress. Use RDAs and it all goes away

I got a medusa reborn on sale and I love it, no glass, three parts and quite frankly just excellent

Took a quick look at that Medusa Reborn mentioned by @NecroticAngel but unfortunately it won’t be going in any cart as I’m a strictly single coil guy. Shame really ‘cos it seems promising. Oh well, such is life. Cheers.

Ive never had a single

Sorry no more reccommendations from me then hehe gluck!

Wow, sorry to hear you had so much trouble with these devices. I used to have the same issues with the first couple RTA’s i tried. I personally am enjoying the Unity as well as Kylin M with the mesh coils. Was using the Creed RTA and loved it as well!
I am to absent minded to drip and most of the time squonk. I’ll get on here and be reading and vaping and the next thing you know I’m gagging on a dry hit! Hate the taste of a dry hit more than my ex mother in law and i seem to not drip or squonk enough and end up with a dry hit.
I have been using these RTA’s for awhile now and find its much more enjoyable.

As long as you’re happy with what you’re vaping on, good for you.
Personally I don’t care for squonking. It just introduces another factor that has its pros and cons (e.g. cleaning even more bottles). RDA’s & RTA’s are the way to go for me. There’s also not a great selection of squonking mods with great battery capacity (I’m also not allowed to buy hardware online so I have to stick to vape shop selections which are miserable at best).
I don’t really agree with your issues with RTAs though, there are more than enough choices that are easy to wick and have great flavor. To each his own though…

Flavor is so much better and general ease of use and experience far superior.

Never heard of Steamcrave? You should really join the train

I also got the Profile Unity and if it’s any consolation the glass broke on mine right after unboxing. Was attempting to remove the base so I could give it a quick cleaning and glass split in half.

I still was able to get it going though using the spare glass. Wotofo needs to start including more robust glass for the Unity. My sense is that they are aware of the issue, but rather than upgrade the Pyrex they provide their vendors with overpriced spares.

@natbone please don’t be quick to judge the merits of RTA’s based on this one bad experience. The Unity and many other brands are excellent atomizers even though I’ve never used one that was 100% perfect.

Never heard of Steamcrave? You should really join the train

Oh I’ve heard of Steamcrave my friend and I’m already on the train (well sort of).

I’ve actually got an Aromamizer Supreme RDTA V2 here at home. Started off OK but I found it hard to get the wicking just right, even after exhaustive mining of information from my family here on ELR and countless video tutorials online. For some reason I just couldn’t get the wicking down. To make matters worse I started getting leaking issues

(yeah, unheard of I know) so I just put it down to user error/incompetence.

All is not lost though! I now use it in dripper mode. Took out the chimney section and glass and use it with the single coil deck. Read some comments on Reddit where they considered it a sub-par dripper but I find it pretty nice actually. Loving the flavour it gives me and it looks sexy as all hell in my opinion. Close the airflow half way down and toke away on a 0.35 ohm single coil at 30-35 watts and I’m a happy camper indeed. Each to their own eh? Thanks for looking out for me though. You’re a good bloke.

Not the best of photos but here he is ready to give me some “Butterscotch Roll” goodness. One of my own concoctions (somewhat average I must say) with Butterscotch, Caramel, Cream, Sweetness and Cinnamon Roll (all Flavorah). It’s not too bad but definitely needs re-working. Cheers brother… 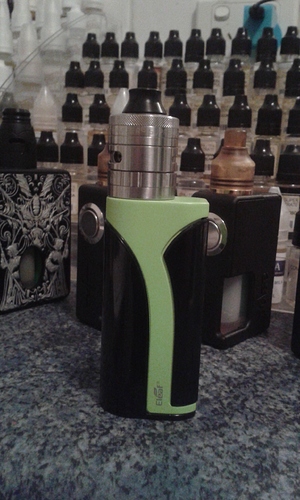 RDA’s are so easy to deal with,

Your preaching to the choir, simplicity will win out over unneeded complexity every time.

What put me off was the hassle of different wicking requirements for each tank, their quirks and challenges.

That is why I LIKE em. To each their own I suppose.

To each their own. I use both. But you have just stated exactly why I don’t buy anything from WOTOFO. Never had anything but a problem with them.

Well, I finally got the thing working. I have to say I’m impressed. It’s the first RTA I’ve tried that rivals the flavor production of RDAs, including my favorite, the Profile.

As someone above mentioned, it is easier to switch out flavors with an RTA and that’s what I intend for its use, as an easier way to try multiple recipes.

As someone above mentioned, it is easier to switch out flavors with an RTA

I have to disagree with that statement. RDA’s, to me, are much easier to swap flavors due to their simplistic design. Rinse, re-wick, drip.
RTA’s are a bit more involved because they generally have more pieces so disassembly, rinse, re-wick, reassemble and refill. Requires more time.

If I’m dripping, I agree. It’s the squonk bottle issue that I find a pain. I can put multiple lemon recipes into a bottle but that’s the extent of it.

Never say never @natbone. I have a lot of nice gear. Squonks,rda’s,rdta’s,rta’s, and still occasionally use a genny for nostalgia.
Recently I had been in mostly squonk mode along with my KF5’s
Before I came across an rta I thought looked good. After I tried the clone I bought a couple more since I was really diggin this one.
At the end of the day I have not squonked in 2 months now.
Vaping is ever changing and you don’t know what tomorrow may bring so keep your mind always open!

Since I have no squonk experience, I always wondered about it… when swapping distinctly different flavor profiles (e.g. a custard after a mint), do you clean the connecting parts from the mod as well? Does the flavor remain?
Seems like a bit of a nightmare to me. Dripping is so much easier: rinse, wick, done. Most times I don’t even screw the RDA off my mod.

That is so spot on. I’ve moved through a number of phases in vaping. It does keep it interesting, doesn’t it?

Dripping is by far the easiest way to vape. I tend to drip at night when I try new flavors and recipes.

With squonk mods I always clean them out when swapping flavors, unless it’s the same profile. It’s tedious more than anything else. I get around it by having 4-5 squonks setup at a minimum at all times.