Thank you for posting this!

I can imagine we will be seeing alot more of this as the rotten government encroaches more and more our choices to live longer!!!

Hopefully this turns out in our favor, I live in Indiana.

And so it begins in the USA. This is exactly what I have been hopeing for. Lawsuit after lawsuit, after lawsuit. After all not only are they bias toward our industry, they are creating a monopoly for only a handful of companies. there’s more than one way to skin a cat. Truthfully I would like to see the state of Indiana tried for attempted murder for condemning smokers who want to quit to a lifetime of smoking and death…

We need one of those major media hound dogs who is also an avid vaper to get on to it. Hell I’ll even take a rogue (although very passionate) media figure like Alex Jones. Just someone with some clout and connections. Someone who will unabashedly expose the real issue behind all the actions government wants to take. Come on Donald Trump, go get yourself an Efusion and a TFV4.

Another troubling deficiency in the law is that products made by big tobacco companies are completely exempt from these regulations. The products manufactured by companies like RJ Reynolds and Altria, formerly Philip Morris, and typically sold at gas stations are not regulated because they are not intended to be refillable by the consumer and they are less than 4 milliliters in volume.

“So even though they use the same ingredients, manufacturing methods, and are intended for the same use as eliquids produced and sold by Indiana companies…big tobacco gets to side-step these regulations? That just doesn’t seem right,” McMahon said.

Come on Donald Trump, go get yourself an Efusion and a TFV4.

Now that sounds like a hoot. Can you imagine Donald Trump at the podium chuckin on a Vape…Now that is funny… 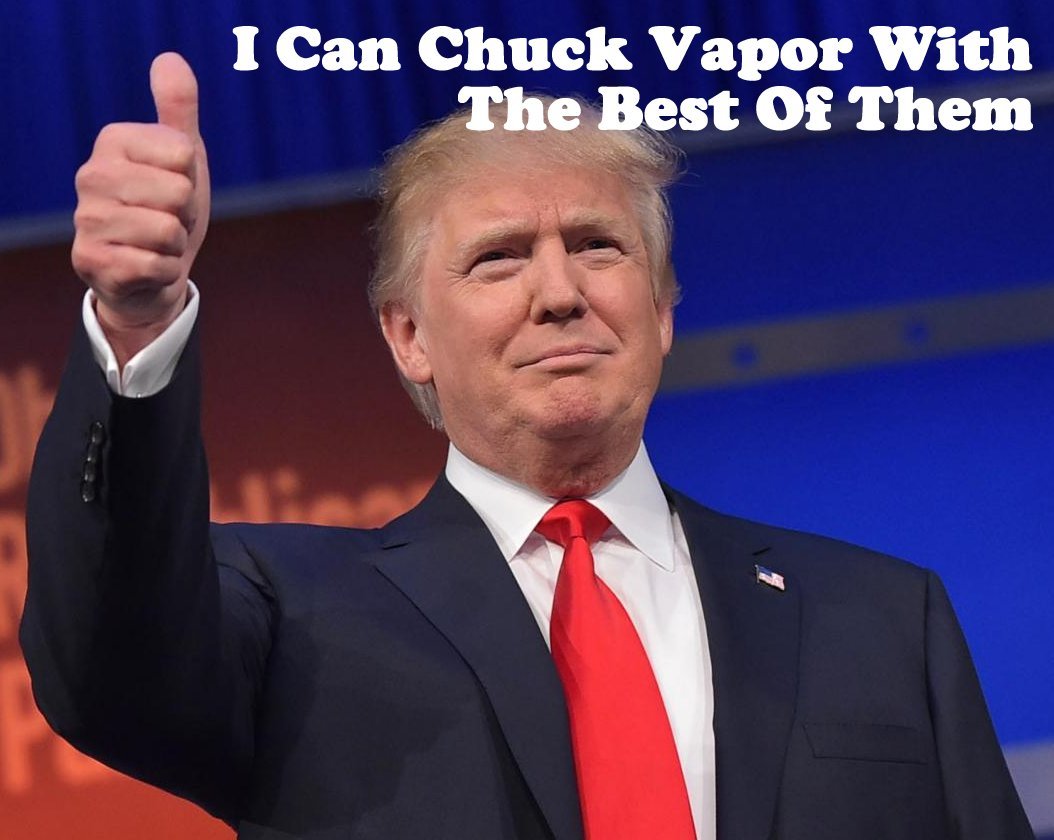 Another troubling deficiency in the law is that products made by big tobacco companies are completely exempt from these regulations. The products manufactured by companies like RJ Reynolds and Altria, formerly Philip Morris, and typically sold at gas stations are not regulated because they are not intended to be refillable by the consumer and they are less than 4 milliliters in volume.

This makes me very sad and a little bit sick. I hate that it has come to this. It feels like we are back in the 20s. The mafia (Big Tobac and Big Pharm) has all the dough and all the power and the politicians are all kowtowing to them. I sincerely hope, if this is the future of the industry, that many more advocacy groups step up and file similar lawsuits. This is monopolizing, and it runs completely counter to the capitalism our country supposedly advocates as the ideal.

Did any body watch Hawaii 5-0 tonite? Murder by nicotine!
There statement was nicotine is readily available for E ciggs. Now we have the Tv shows attacking us.

In July of 2016, portions of House Enrolled Act 1432, as passed by the Indiana General Assembly, will go into effect. The recently enacted law states that in absence of regulation by the FDA, the Indiana legislature would craft a national industry wide set of regulations for eliquid industry.

This is just the beginning. Once the FDA starts getting their regulations in place these little Advocates will have to take on the US Government. That is when this will get ugly. Meanwhile, the FDA is just sitting back waiting to see what the lawyers on our side will do. When they start to get the upper hand the FDA will pass regulations to aid the battle against us. Check, Raise, Fold.

^^This is how business is done^^

Remember the "Golden Rule"
He who has the gold, makes the rules…

Remember when Edison toured the country electrocuting small animals (cats & dogs) in front of crowds to demonstrate how dangerous alternating current (AC) was and that direct current (DC) was the future. He even killed an elephant at the worlds fair in an attempt to fear monger A/C. Yea, that shit happened. These greedy SOB’s will stop at nothing to protect their own bottom line.

Mofogger, you come up with some weird stuff. The elephant’s name was Topsy. I’ve been an electrical engineer for over 20 years and never thought to look for that video. Yeah, Edison was eventually made to look like a bafoon by Tesla when he lit up Niagara.

You know guys, the nic we all use, well, most folks use, all comes from tobacco. I mean, that’s big tobacco too I would reckon. They just don’t want us getting it wholesale.

I think this fearmongering is just another distraction to keep us busy while they sell the country out from under us. While they squeeze more productivity out of less wages, buy elections, and establish ever more monopolies. Money is speech and corporations are people now.

Mofogger, you come up with some weird stuff.

Hehe, yea, I’m a pretty weird dude and I definitely take that as a compliment

Mom always said I was “special”, at the time, I didn’t know she meant “rubber-helmet” special…

I think this fearmongering is just another distraction to keep us busy while they sell the country out from under us. While they squeeze more productivity out of less wages, buy elections, and establish ever more monopolies. Money is speech and corporations are people now.

More truthful words have never been spoken… This kinda crap has been going on since the founding of this country. Sadly most people don’t lift the stones of history and look at all the dirty crap underneath. The Standard Oil monopoly, the lead gas/paint cover up, Railroad tycoon conspiracy, black flag operations like the Gulf of Tonkin and just more lies on top of lies by Government to manipulate the population. We are a herd and that is exactly how Gov. and the ruling class sees us…

I’m a Hoosier Democrat but I can tell you even I would vote for Trump if he started blowing clouds at the debates lolololol.

I’m very proud of Hoosier Vapers for getting this started and they have a lot of backup finacially and moral support from every educated vaper not only here in Indiana but in the US. I hope every single vape vendor joins this suit, but that ain’t gonna happen. Most vendors will just sit back and let HV do the heavy lifting and reap whatever rewards come from this. Its sad that there are just as many vendor vaping sheep as there are vapers who don’t do anything for advocacy.

Thats Baaaaa baaaaaa. Sheep. Even cows get pissed and fight back lol.

Ok, so the way I have heard it from vape shops in Indianapolis the way the law is written, no vape shop will be able to sell E-Liquid that isn’t made in a lab approved and licensed by the State of Indiana. So that is partly the reason for the lawsuit. Vape shops around Indy have a gloominess about them when you go into them now. One shop owner said he doesn’t know what they will do, because they only sell their own line of juice and very little hardware. I think the vape shops here were about to be blindsided.

And even worse, my favorite vape shop had no idea this was the case. They thought they would only be able to sell juice from other retailers, and just wouldn’t be able to sell their own line. If this is true, this is the beginning of another prohibition.