The iPV5 200W TC Box Mod by Pioneer4you is HERE!! It will has the Yihi SX330-200 Chip. Temp Control functions are ready to go for SS/Ni200/Ti wire. It is the progressive evolution from the sensational iPV series, capable of delivering an impressive 200 watts of power. The iPV5 was engineered to encompass a huge power range using dual 18650 batteries for a greater power ceiling in comparison to previous iPV box mods. Under normal use and temperature control setting, the new Yihi SX330-200 chip is capable of extreme precision and efficiency ratings for personalized regulation. The iPV5 is cleverly built with an intuitive OLED display and ergonomic layout for a seamless vaping experience.

Available in Black, Blue and Silver.

Note: This is NOT a pre-order. We have them in stock!
UPDATE: We sold out of Black and Blue quickly. Join our mailing list to get an alert when they are back in stock. We are expecting them early next week.

Didn’t see that color in the initial offerings only black silver and white.

Definitely on my list but have to wait. Thanks pv.

Nice! If I was in the market for a dual batt mod, I think that blue one would be it!

The IPV5 is a work of art, it fits perfect in my hand and the functionality of the controls are fairly simple to figure out, that being said, The IPV5 is a monster cloud producer when paired with a decent tank. Personally, I’m using a Kangertech Subtank Plus with mine and even with a stock .5 ohm coil this setup produces massive tasty clouds!!!
It’s been stated by Pioneer4you that there is a firmware update available on their website to modify the graphics on the screen, however after searching multiple times, I personally have been unable able to locate the firmware update at this point in time. Regardless of that minor issue, the IPV5 is the best mod I have used personally ever! So if your looking for an awesome new mod with absolutely the best chip on the market and tins of adjustable configurations then the IPV5 might just be what your looking for!
In my personal opinion the $64 bucks I paid for mine was totally worth every single penny cause this mod TOTALLY ROCKS!!!

I second this, except for the best mod ever. The Yihi chip simply cannot compete with DNA 200. But it is right there with it as far as quality of temp control in a simple to use package.

I have an iPV5 and another on the way. The first one I got was the blue one. I will be doing a full review on it very soon. It has a better finish than any painted mod I have ever seen. Hell, it has a better finish than my Mustang. It looks as though it was made by a skilled craftsman living in a little cabin in the woods. Words cannot describe the quality of the finish. I have also seen the silver one. And it has the same quality to it. It looks like bare metal, but finished in a way I have never seen after being a CNC machinist of 20 years.

These mods are very heavy, which always seems to remind you of a quality product. They feel like a solid piece of metal in your hand. The battery door has a perfect fit, better than any other mod I own or have owned.

Temp control - FLAWLESS! Every tank I put on this thing works fine after reading the ohms. And this mod allows you to adjust the ohms after it reads the coils. Press the Up+Down buttons, and as soon as it reads the ohms you can press the up and down buttons to adjust. So if you place a non-room temperature coil on the mod and want to dial the resistance in manually you can.

Literally just got mine guy’s. Blue. Be back soon after using it for the day.

Have you heard when the sx pure tank is to be released?
Oh, glad i got some 304ss in my order lol. 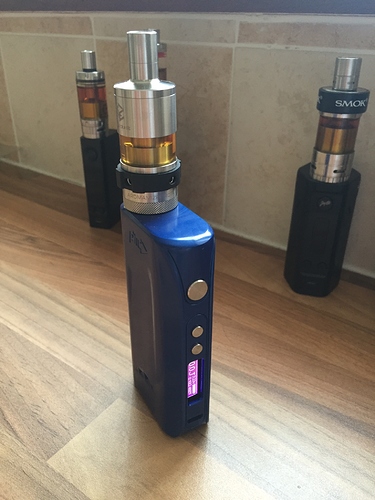 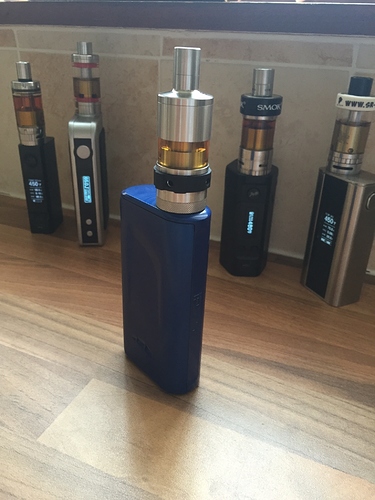 Where’d you get it?

From here mate http://www.vapetime.co.uk/ipv5/
They said they had 22blue left yesturday, no other colour as of yesterday.
Edit:- ordered mine 10am yesturday and received it today. Quick or what!

Yeah, I was told that is the first LCD screen Pioneer has used that is backlit. It looks good like that. And yours looks great with the Aromamizer on there.

It looks very nice, I have the IPV4s which I like alot, I’m hoping to get one by the end of March, long wait but am sure it will be worth it. and I do think the blue one looks the best.

The silver one has the look of bare metal. The finish on it is beautiful too.

The screen is set further back I’ve noticed too.
Sitting pretty with the Griffin on it. 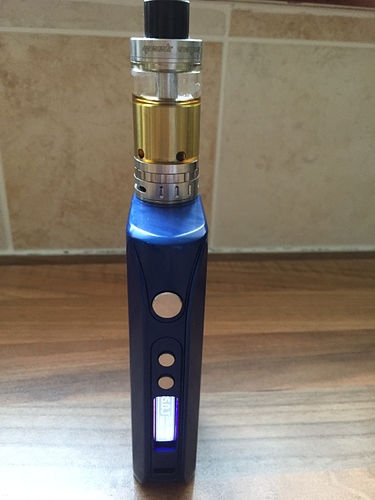 I went through and placed every one of my tanks on it. Be careful with the TFV4 because the outer ring looked like it would scratch the top

Haven’t tried the tfv4 yet but thanks for the heads up.

Found the pure x2 tanks for the ipv5. All colours. Looks promising.

The iPV Pure X1 tank by Pioneer4you is the first tank to be feature the new YiHi SX Pure Technology coils. This tank promises to offer coil life of upto 3 months with excellent flavour and vapour production