Is my battery ok for my new mech mod?

. Because it says regulated does it mean I can’t use it on an unregulated?

In a mech, there is nothing telling the battery what to do and since batteries are stupid they will try to fire anything u attach to them, including themselves! The amps u draw are dependent on the resitance of the atty that u attach to it. I havent heard of that brand of battery and since u have to assume that the advertised amp rating is inflated, i would stick to a resistance of .5 to be safe till u find info on the pulse rating of that battery. Id definetley get a better battery brand asap tho and not use a mech till u did.

Bottom Line: In my opinion, this is a very good and underrated cell. I’m giving it a 19A continuous discharge rating (CDR) and 3000mAh capacity rating. Its appearance is identical to the Samsung 30Q. Its performance is essentially the same as the 30Q. It can be pulsed to over 40A without overheating or its voltage dropping uselessly low.

Tyvvvm!! I didn’t know where to look for Moochs specs

Thks bud, had to say something before someone gets hurt, right…

Ohm's law calculator with real-time results as you change volts, current (amperage), resistance or power (wattage). The fields can be individually locked.

start u off w/ some reading too,alot of info avail to have a nice and safe experience to mech world. Welcome aboard but take care!
https://www.e-cigarette-forum.com/forum/blogs/mooch.256958/

Many thanks… been reading almost a year

As with everything, You can never know too much.

You said a mouthful there!! Especially when it’s something you new Nothing about. I think that’s one thing I luv about this diy journey is how much I’m learning, I’ve learned and soo much more to learn… everything from ohms laws to anatomy and culinary

Some of it just doesn’t stick w me so well ( ie. ohms laws )

V/I x R make a chart and post on your desk and card in wallet. 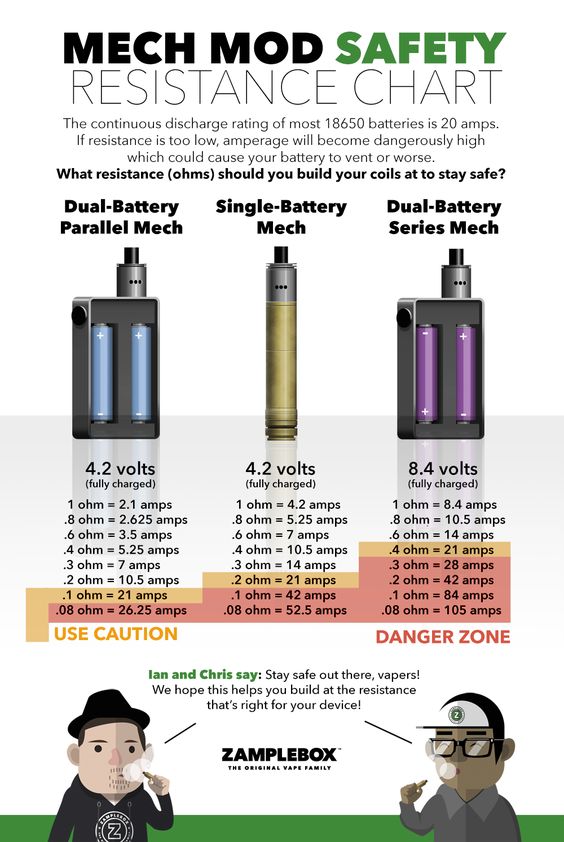 So if my battery says it’s 15 amps half charged it’s 7.5 amps? Sorry if dumb question. This battery stuff just doesn’t want to register w me

yes but i think u looking at this the wrong way

One more question I hope you don’t mind. Does your battery meter reader ever say F3 or F4. ? Is that the same build I shouldn’t put in an unregulated mech? That make sense?

Amps is the draw on the battery it will be dependant on the build and the build only. I would suggest that you stick to builds that wont draw more than 15 amp (allow a little margin for mooch test). The mage mech tricker is a single 18650 so when you are learning I would say don’t build a coil under .25.

sounds like u are refering to an inline meter and giving an error w/ low res. atty attached which iirc is .15. Use a decent ohm meter to measure your buillds, not one of those