My Joyetech Cubis arrived today. So I thought I would give it a bit of a thrashing to see what I thought of it. First up, the packaging. Now I am not going to go on and on about the box. You all know what a box looks like. Here ya go
Front It comes with the usual stuff. Manual, extra coils, etc. But this didn’t come with any extra O-rings. Hmm. They did however include an Acrylic 510 drip tip that looks pretty nice on the tank. The first thing I did was pull the tank out and looked it over for any tool marks, nicks or dings, all the standard stuff. Everything looks to be pretty good. First impressions - it doesn’t impress me as much as the Advken Ohmega did. Or the Aromamizer. But everything is nice and smooth and very well machined. It just doesn’t have much going on as far as the design goes.

The metal drip tip has a Delrin core and was pretty snug. But it came out after a bit of pulling on it. The Acrylic tip went in snug as well. And since there are no extra O-rings in the box you might want to lube them up before installing the drip tips. So I then decided to break it down.

All of the threads were nice and smooth. I didn’t have a single problem pulling the tank apart or putting it back together. This tank was covered in a very light film of machine oil. It wasn’t noticeable until I dropped everything into the USC with some Vodka in it to give everything a quick cleaning. Which turned into a 10 minute scrub with dish soap and a brush and pipe cleaners. It was pretty gummy. One of the worst I have seen so far. But it cleaned up nicely.

It comes with the .5 ohm SS coil pre-installed. In the box is a 1.5 ohm Clapton coil head, and another SS coil head at 1.0 ohm. All the air comes in under the adjustable top cap. You simply turn the cap counter-clockwise to open the airflow all the way up, and clockwise to close it off. You can also see the fill level marked on the side of the tank. I thought it looked low until I filled it to the mark then dropped all the hardware into the tank. It’s actually right where it needs to be. What is really cool is if you look back at the disassembled tank pic again, when you go to fill the tank you just unscrew the top. The coil and top of the tank all come out as one assembly, leaving just the tank attached to the mod. It is really a slick design. And it’s perfectly leak proof. The only opening is up top where the air passes over the chimney and draws the vapor up with vaccuum I am guessing. I will take it back apart tomorrow and have another look at everything a little closer. But here you can see the inside of the top cap and the channels that lock it in place and allow air to flow through. The only thing I have noticed is the coil gets a little flooded when you screw it back together. But other than that, I am actually a bit surprised at the vapor and air flow at 30w (straight power mode). I did try a couple 40w hits and it wasn’t bad at all. It started getting just a tad dry at the end of the draw. But at 30w I can rail on it and it stays pretty well wicked until about the 4th or 5th draw.

I will finish this up tomorrow evening and go over the airflow a little better to show how that all works. But I really like this little tank. It surprises me with every draw. I had plans to give it to my girlfriend’s daughter. But if I do I think I might just have to buy another one for myself.

EDIT: Now for the Clapton Coil
I had such high hopes for this. I pulled the tank apart and figured out how it all works. It is a rather ingenious design. And here they are screwed together (sorry for blurry pic) If you look at the Clapton coil when compared to the installed .5 ohm coil, when you draw, air flows in from under the top cap, down through the outer barrel, through the outside of the coil, then back up through the center of the coil and up the chimney. vuYiLaK.jpg600×586
As you can see, there is not much room for airflow around the outside of the coil. There are very small slots there that the air flows through, and I have to say they are way too small for my vaping style. These coils are very restricted. And they don’t wick well at all. Even at 15w I was getting nothing but dry hits.

On the coil that was installed in the device when I got it, the air just circulated from the outer barrel right up through the chimney. This happens right at the face of the coil, drawing the vapor up and away from the coil. Pretty slick way of doing it. The airflow is far less restricted and it’s not too bad. Needless to say I am back to vaping on the standard coil, and I am not even going to bother trying the 1.0 ohm coil which is designed the same as the Clapton.

And I have to say, it really pisses me off that the name “Clapton” has become so mainstream now even the manufacturers are using it. It’s an SRV coil people!

Cons: No RBA. This tank would be so sweet if it had an RBA deck. Airflow is a bit restricted for my vaping style, but not bad. The standard coil gets a bit flooded when reassembling. The Clapton coil dry hits, and is way too restricted for me. The tank design is fairly plain. No extra goodies like O-Rings or extra glass.

Overview: I really like this tank. I think the coils could have been a couple mm larger in diameter to increase the airflow. But using the standard coil it isn’t too bad. But we will see how I like it after a few days of using it. It really bums me out it doesn’t have an RBA. The design of this tank is so simple, making an RBA for it seems like it wouldn’t be hard at all. I wonder why they didn’t?

Very nice review! Can’t wait to get mine!

Great review! I am looking forward to getting my hands on the Cuboid Mod. This past year Joyetech has really impressed me.

making an RBA for it seems like it wouldn’t be hard at all. In fact, I wonder why they didn’t?

I think an RBA deck is in the works, according to Joyetech.

FYI…
I found the tank online in 3 different places, just doing a quick search.
They were various pricing 13.99 up to 24.99

Thanks everyone. I will take the Cubis to work with me today and see how well it takes on my TFV4 duties for a day. The TFV4 will be there ready to take over though. But I am going to let this Cubis give her hell.

It seems I may not make it to work today. My van is in need of a new battery. And I am stranded at home at the moment. 3 more hours until the parts stores open up. So 3 more hours to play with this tank some more

Thanks Pattie. I finished this review up. I will vape on this tank a few days and report back if anyone is interested. Right now, it’s doing OK on the standard coil. This tank might make someone a good second stepping stone. But I can’t for the life of me figure out why they included those other two coils. It’s like trying to drink a coke through a coffee stirrer.

well done my friend!!! and it makes me wonder if an rba will be available soon?

I don’t know. There appears to be a nicer tank of this style by Surefire Vapor called the Smart SubTank and it doesn’t have an RBA either. This is a “cupped” style tank I guess. Never seen them before so are there others out there like this?

RBA has been announced. Can be either built horizontal 25-50W or vertical 25-70W. 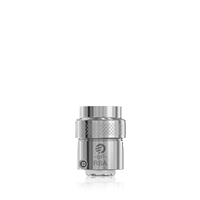 BF RBA Head is convenient for customers to rebuild and replace coils,catering to variety of needs, and is economical but not low-end for better vapor experience.

Woot! It will be a badass tank with an RBA, as long as the airflow is still good. I assume it will be as the air should just flow across it like it does the standard coil.

I’m actually really digging the hell out of this little tank. I picked it up a few days ago in a boxed kit. The kit included the Cubis, the VTC mini, 3 different coils, and the Cubis RBA for $55. Threw in an LG HG2 and I almost can’t put it down. This and my Reuleaux DNA are the only mods I’ve used the last three days. I’ve only tried the .5 coil in TC and t’s probably the only one I’ll bother with. Already picked up a box of spares for it. Nice that I can use the same coils in this and the couple Joyetech AIO mods I picked up for travel.

I’m glad to hear it’s working well for you. I just received my Cubis & RBA in the mail today. Haven’t had a chance to do more than un-box it and look it over though. Going to check out some youtube vids on building on the RBA. Hopefully I’ll have time this weekend to try it.