Dang it! I was hoping to be the 200th person to post a Unicorn Milk recipe today! Now you’ve made me feel all guilty about the prospect… 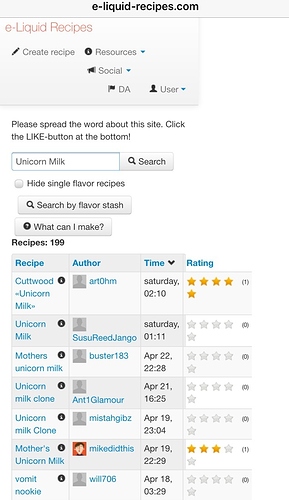 Here’s the thing, not everyone has every flavor in their stash. . If you adapt using a substituted flavor, it might be useful to share it for someone to see a recipe where someone has used a different brand of flavoring to achieve a similar result.

If it’s just an adaptation for PG/VG or nic level, then yeah, I keep those private, but if I significantly change the recipe and like the result, I’m gonna share it.

And with the adapt button, new versions will have a link back to the original.

No, by all means complain loud and often. Guilt does change behavior, just ask my Catholic mother.

but yeah, there’s an awful lot of crud gets posted, I have more recipes private than public, because I tend to actually test them out first. And some are just plain-Jane strawberry cheese cake or whatever, though if you look at the top recipes they might actually do better … I have only adapted one recipe to date, and that was Bronuts, and I gave Wayne credit. Though mine is better …

But you should also leave ratings and comments on any you’ve tried that you didn’t like too.

I highly doubt there are mixing company shills posting bogus recipes to get people to buy more flavoring, but I guess it’s possible. But it would be more in their interest to post really good recipes that generate positive word of mouth that brings customers to them, rather than risking creating the impression that all the recipes I’ve ever made with X company concentrates were rubbish.

Good luck finding the great recipes buried in among the crazy experiments and bad ideas. Honest ratings and comments from the community are the best tool we have for making this easier, but those are in short supply compared to the sheer number of public recipes!

The way I look at is data points.

The more info the better. I would rather have a 100 options/data points to interpret rather than just 5.

If I used just 5 then I would be dumping a ton of test bottles. Using 100 data points I rarely ever dump. I think I have ever dumped 8 15ml bottles. 8 when I was new…and the rest because of user error. User error because I adapted wrong or just plain didn’t research enough.

It all comes down to one question for me, and that is whether you click or type…

If it doesn’t contribute to the community in a positive way, then what’s the point?

That kinda sounded like something someone going out of their way to be a dick would say. Did you mean it like that?

I’ll complain with you, no shame.

I agree with your logic behind the reason why people are doing it.

I’m just waiting to see when mine will be adapted lol is there a notification for that?

My stuff is original and I don’t make it public until I know it’s what I’m trying to achieve but here and there I will tweak it a little bit and note it on my recipe if it’s already public.

Utter negativity, like if I went to your recipe and rated it a 1 star without saying anything else, or worse yet, went into the comments and said “this sucks balls”, well, that’s worse than worthless. Wouldn’t you agree?

I don’t think that’s what I said

Can I get an amen?