I wondered if anyone had gotten their Kylin M (or if anyone had ordered, even). I have had 2 on Pre Order since early May, I think. Hopefully going to deliver tomorrow. Can’t wait! Love the Profile, but didn’t pick up the Unity for a few reasons. Hoping the Kylin M hits all the same high points.

Aside from the raves on Youtube, has anyone seen any reviews on these, either? I was kinda surprised noone from here had reviewed yet, but then unless they sent out tanks in advance of pre-order, i guess would be pretty darn hard to get hands on one early.

The one thing i’m VERY excited about is Kylin is making Mesh Strips in Stainless, so TC will be an option for me again. I picked up the VV SS mesh wire, but for some reason my lil mod doesn’t read it as stainless, so won’t let me vape in TC with it. I’ve just gone back to ORFR kanthal mesh, till I can get the Kylin stainless mesh.

If I could have gotten a hold of one I would have. I think only the top popular youtubers got it. Like Tip Rippers. He actually got one and has a review. I think Suck My Mod does too.

I unfortunately have to wait to get one and by then there should be a million reviews already.

Well, personally, just cause I’ve seen other reviews for it doesn’t preclude me from getting new info from yours. lol There’s a few x now you’ve had a unique catch or take on something I’ve not heard in numerous other reviews. So if when you get one, you can put me down for a ‘like’. lol

In the interim, mine should (hopefully!!!) be here, tomorrow. I’m by no means a reviewer, but I can give quick yay / nay notes when it comes in.

For sure. Here is an offer; If you want to do a video review of it, I will feature it on my channel or clips if your shy. Something to think about.

Oh ya, The Bueller reference was funny and I think most of us will get it. LOL

Kylin is making Mesh Strips in Stainless, so TC will be an option for me again. I picked up the VV SS mesh wire, but for some reason my lil mod doesn’t read it as stainless, so won’t let me vape in TC with it.

Well, it might, but it might not (referring to the part in bold). Depending on what mod you are using.

If the mod has ‘known issues’ reading SS (or resistances below a certain point), regardless of what’s advertised… Then in some cases, just changing the atty/mesh may not fix your problem. Hard to say though.

I’d also be curious to know if others have had problems with getting readings with the VV SS mesh. Offhand, I don’t recall reading about any such issues with it.

Yeah, I’m definitely going to need to pick up a new mod with a lil better chipset to be able to reliably use TC, i think. Grabbing his/hers Tesla Nano for me and my guy to go with our Kylin Ms. Right now I’m using a Pico Squeeze 2 with my Profile… Love the cute lil mod, but I’ve only ever been able to use TC when I’m using an RDA with traditional wire SS coils around .4 ohm. These lil mesh bits are super low… closer to .13 if memory serves. Also, I tend to vape lower wattage, 40-45 ish, and also like my temp rather low, in the 250 F range. I think you’re right that its a resistance limitation, but don’t remember its posted resistance range for TC on SS, offhand. I think I’m just trying to vape outside it’s narrow little TC window for ohm/temp on this Squeeze, maybe?

Plus, its very possible that the Kylin SS mesh won’t be as nice as the OFRF… we shall see. I’d be all over the Vandy Vape mesh wire I have, but it’s just slightly too pliable to hold its shape well around that ‘curve’ for the mesh. It works well, its just a bit more of a pita to build and wick.

OMG, where!!??? I’ve been hunting like mad for them. I figured they had to come out with em sooner or later. Plus the Kylin SS mesh are only avail for preorder from China. No fun. lol

U seriously just made me smile like a maniac. Never got so excited over a piece of tiny flat metal, in my life.

I don’t know where, they sent samples with the the new OFRF tank to the reviewers.

Oh hell, it’ll be worth the wait. And thanks so much for telling me! I was going to order a buncha Kylin SS mesh on wed when I get paid, but I’ll hold off for a bit, and try both. I’d have kicked myself if I ordered a ton of the Kylin, and then found out about the OFRF. Given how great the kantal OFRF strips are, I’ve got a sneaking idea the OFRF will be amazing. ty ty

Thanks so much for the suggestion. Its a great one, and I was hopeful it would work for me, but alas… naaah. lol

I can’t remember who originally turned me onto the VV SS mesh, but it was some helpful soul here. I like it… Lord knows its economical… but my current mod Pico Squeeze 2 isn’t reading the VV SS mesh as ‘SS’ for TC vaping. I believe the resistance is just dropping below whatever the TC on my mod will allow. I’m getting a Tela Nano, though… and those lil guys are SOLID and have very well regarded, broad range resistance, TC mode. So i’m sure i’ll put my VV mesh to work again, soon. I do prefer the OFRF, just cause its a little stiffer and easier to work with than the ‘floppiness’ of the Vandy Vape mesh wire. Just easier to ‘bend’ and stay where you put it with the OFRF. @AlanS … I’ve got the 200 mesh, and its pretty floppy. Is the 150 wire any stiffer, by chance?

But the VV definitely is build-able. I tried it a LOT just to make sure my mod would’t read it. lol .For anyone who’s TC is a bit broader or reliable, its a perfect suggestion.

BTW, totally random, but I’m using the VV mesh also to ‘bead’ a choker necklace. I thought I might try to embroider on it, as well. Its perfect for really unique jewelry design! lol

I got the Kylin M on Saturday but it was a busy weekend so only had a chance to try 1 build so far. I used the VV SS 200 mesh for my first build and it is good but didn’t nail it with my first wick using Rayon, the Profile Unity was better. Gonna rebuild it today and I do have the New OFRF SS Mesh strips I got with there new mesh subohm tank for review, I will let you know in advance how it works out.

Here is a pic showing the difference in the mesh between the VV SS 200, OFRF kanthal and New OFRF SS mesh. 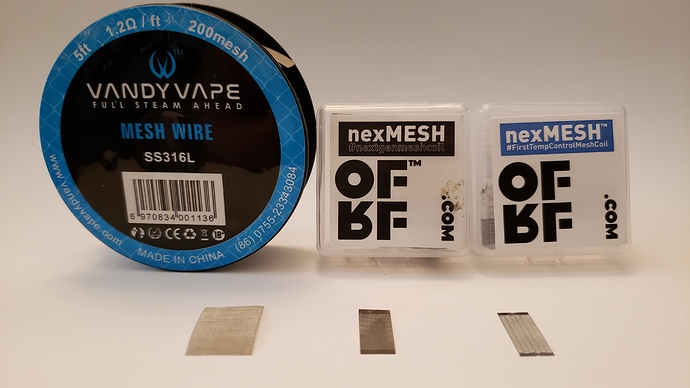 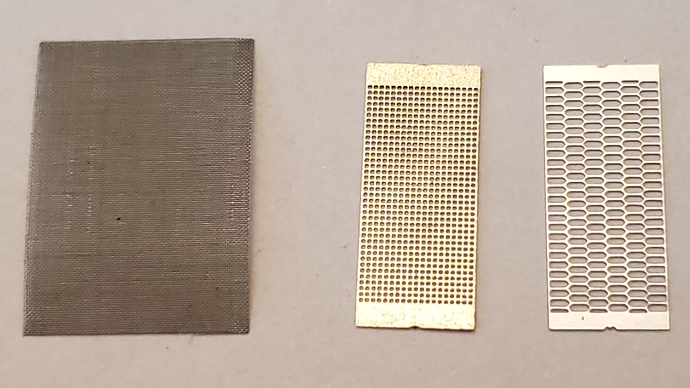 As far as TC it is your Pico Squeeze 2 that’s the problem. I love that little squonk mod but mine likes to jump out of TC as well with some builds. If you want the best TC then just get a DNA250C mod and be done with it, best chip on the market

In my opinion, I like the Profile better between it and the Kylin M for what they are designed for. I will say that neither of them will replace my preferred methods. No game changing performance for me but they are ok for what they are. Easy to build and decent flavor production in both but for me the Profile produced a little more flavor. The top air flow on the Kylin M needs something more I think.

As far as TC it is your Pico Squeeze 2 that’s the problem. I love that little squonk mod but mine likes to jump out of TC as well with some builds.

I have to agree with Mjag here…
IME, Eleaf has never really done well with TC and SS.

For squonking in particular, I’d suggest either a Dovpo Topside or a VV Pulse Dual.

Will the Pico 2 squeeze not accept Arctic Fox?
https://nfeteam.org/

It might, but unfortunately that has never overcome the limitations of the chipset (and associated monitoring circuitry) itself.

It definitely improves some other aspects though, but it was primarily in the power mode of operation IME.

I immediately went to check but looks like it is not supported. 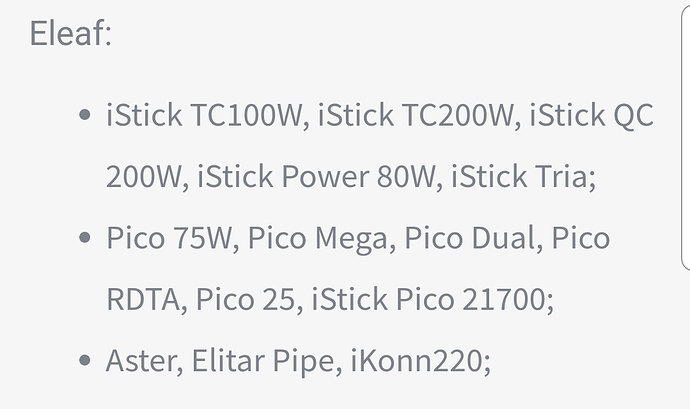 I know it improved the Joyetech Espion for me for TC.

/OT
I’d bet that it might in the future though.
I’m thinking that they just need to find out the hardware ID code (for that specific model) and add it to the list…

Could be wrong though. Can’t say for certain as I’ve never been inside many of the units that AF runs on. But typically, that’s how firmware updates are done IME (the software checks for the internal hardware ID code, and then allows/disallows the update to proceed).