Looking for some advice

Hi all. I would like to lead off with a thank you to everyone. I am just getting into diy and have found this site and forum to be invaluable.

I am looking for some advice on some good combos/recipe suggestions with the flavours that I have.

I have tested all the FA’s other than lime, as well as funnel cake and blue raspberry (omg that one sucked). I am thinking a nice Pom rasp mix with some sweetener for my first full mix, but I am looking for some suggestions on which of these flavours will combo well together.

As taste is subjective, my profile is lighter flavours without too much smell. I don’t want to walk into my condo and smell what I was vaping 10 hours ago, so I am thinking I would be low on percentages, so looking more for flavour combos with what I have.

My previous adv were a double tobacco with a touch of menthol, a blue slushie, and currently one labelled as pomberry. Can’t tell you what they contained as they were store bought.

Would like to add all the flavours I have tested as mentioned above all seem usable to me but need something (other than blue raspberry as that one is just horrible). The only one I would consider as an adv is maybe the raspberry with a touch of sweetener and maybe a touch of the arctic.

Adding some notes to add some info on my sense of taste.

All FA tested at 2%.
FA citrus mix - nice citrus, I get an orange flavour with a nice citrusy flavour. A little scratchy on the throat hit.
FA forest fruit - good berry flavour, a little too sweet.
FA marshmallow - quite strong flavour, tested as an additive to the solo tests on other flavours after trying solo. Thinking it will work for me as an additive to sweeten/smooth out harsher flavours.
FA pomegranate - really like this one. A bit tart/scratchy throat hit. Needs a bit of sweetener or another flavour that adds sweetness.
FA raspberry - really like this one too, also needs a bit of sweetener or sweeter flavour mix.
Cap funnel cake - getting an almost Graham cracker taste on this one. Think it will be nice at an lower % to give some body to a fruit mix.

Have you added your flavors to your stash and tried the ‘What Can I Make’ function?

Yes, but with different companies (cap, FA, TFA ETC) there are a lot of recipes that won’t come up since I only have one of each flavour. So having FA raspberry won’t bring up combos with other raspberry combos since I don’t have cap, inw, TFA, etc raspberries. Etc.

Thus why I thought I would ask for some suggestions based on what I have.

confused by your answer , the function shows you what u can make based on a CORRECTLY listed stash but you can allow up to 4 missing flavors too. Gl to u!

You could try 2% raspberry 1-1.5% pomegranate and since you think they both need sweetener but forest fruit is too sweet add in 0.5-0.75% forest fruit to sweeten them up a bit

Grab a color wheel for some inspiration… like this one… 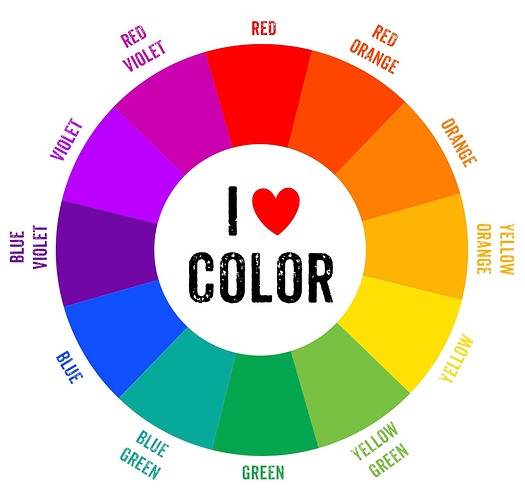 Welcome to elr @LiptiClear , I would start out with some simple citrus mixes, I like lots of flavor so can’t help you with percentages. You can do a general search of recipes to get ideas, like citrus mix + raspberry:

image1915×766 202 KB
You will find recipes using different flavor brands but gives you some ideas: 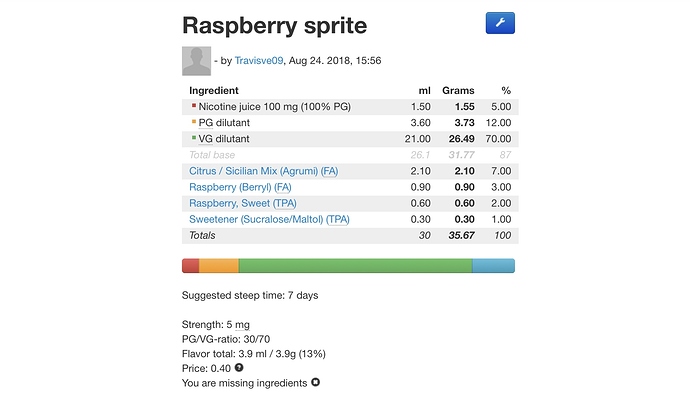 image1885×1094 177 KB
Then check the flavor notes for what brands you have and it will show average percentages used and make your own decisions from there, starting low if you want less flavor.
I myself like to add Sour (TPA) and sweetener to citrus mixes😎
4 Likes
Wombatred26 February 23, 2020, 10:47pm 10

Maybe try this and let me know what you think?

I sympathize with you on the sense of smell thing, though. My nose is so sensitive! You shouldn’t smell this much after just a few minutes of vaping. It dissapates pretty quickly.

Thank you to all for the suggestions and tips on searching. It’s much appreciated.

So I decided to try a raspberry pomegranate citrus mix. Gotta say it has turned out pretty decent as a shake and vape. I am getting quite an orange flavour to it right off the bat, which is a surprising but nice result as I love orange flavour.

It seems to be a bit scratchy. I will make a bit bigger batch and let it steep for a week or so and see if it smooths out. Also thinking I might need to buy a cream flavour of some sort to add to it and see what that will do to it. Overall though, really liking it.

Let me know your thoughts! 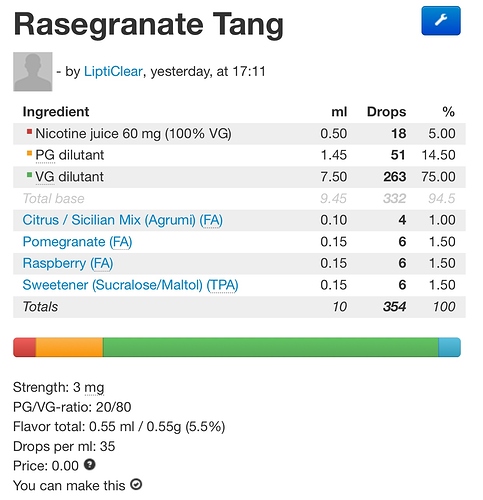 If you don’t want to purchase a cream follow your own notes to help with the raspy throat issue. Start at .5-.75

Yeah I had that thought too. Maybe swap the sweetener for marshmallow or just add it to the mix as is. Before I do that I want to make a batch as is and see how it steeps.

Welcome and glad you joined LiptiClear.

The things is see is RY4 double and vanilla mixed together might be good.

The other is equal parts Raspberry, Pomegranate, Forest Fruit, and Blue Raspberry might get your slushie fix.

Maybe swap the sweetener for marshmallow or just add it to the mix as is. Before I do that I want to make a batch as is and see how it steeps

I would swap it but I don’t like TFA’s sweetener. You tested it at 2% I think I read. If you like it like that then go for it. Taste is subjective for sure and your recipe looks good.

I am sure you will purchase more flavors in the future and when you do you might consider Fa’s Cookie or INW Biscuit to add some depth. Only a suggestion. Good luck and I hope to see your post in the Forum.

I haven’t tried the Citrus Sicilian mix, honestly didn’t even know they made that one

The blue raspberry won’t be used again. It seriously tastes like old shoes. I would not recommend buying it. Thanks for the reply though.

Here are my test notes on the citrus mix: Citrus test at 2%. Nice citrus flavour. Getting slightly towards orange taste, with a very citrus feel to it. Nice as a solo but perhaps a bit scratchy. Will be a nice add to a sweet juice. Trying with 1 drop of marshmallow in a full tank. Marshmallow smoothed it a bit, but wasn’t quite right with the flavour but not too bad. Still a bit scratchy.

What do you all use to smooth out a scratchy throat hit? I have tested with sweetener and marshmallow but it isn’t working great yet so looking for some tips. Note that as of yet I haven’t allowed a decent steep time for most of my testing so far. Do you find that allowing a week or two for steeping can do this for a juice or will a scratchy throat hit still mainly be there after a decent steep?

Steeping will definitely smooth a lot of things out, but I don’t really know with the citrus flavors…I know citrus anything usually has some throat hit to it, but the only time I use lemons or limes is in conjunction with creams or bakeries, or both lol and that knocks the throat hit way down