I’m taking a leap into the world of mechanical mods and would like a little advice from some of the veterans here. Let me start out by telling you what vape mail I have coming, what I plan on using it for, and we can go from there.

I have two mods on the way from vaporider.net, both clones for less than $45 shipped: 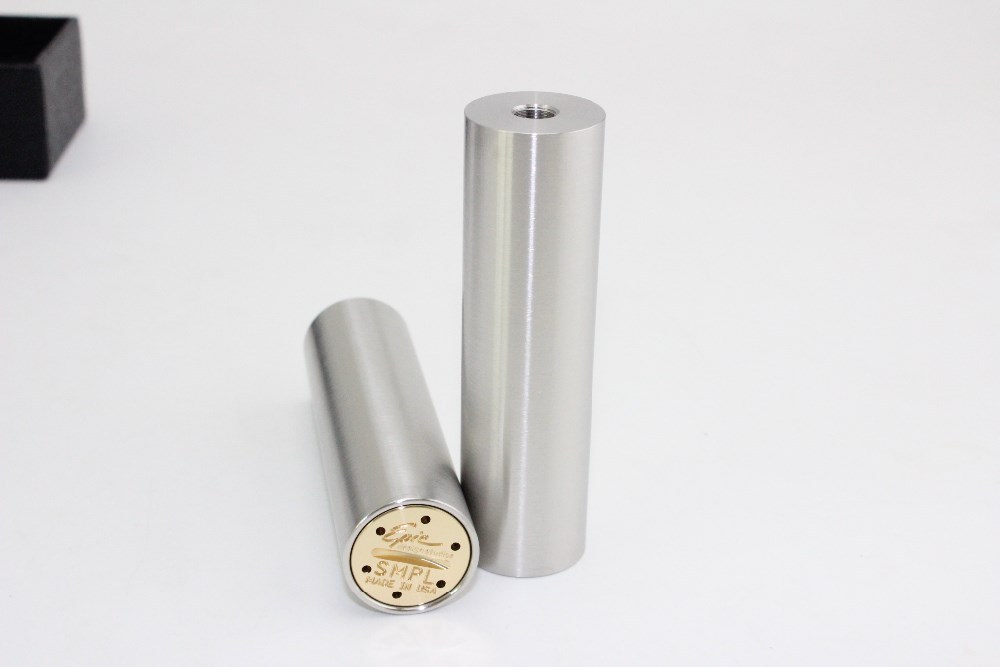 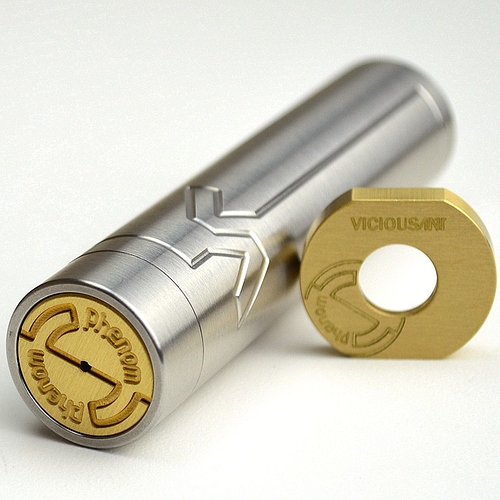 Picked these up on Amazon: 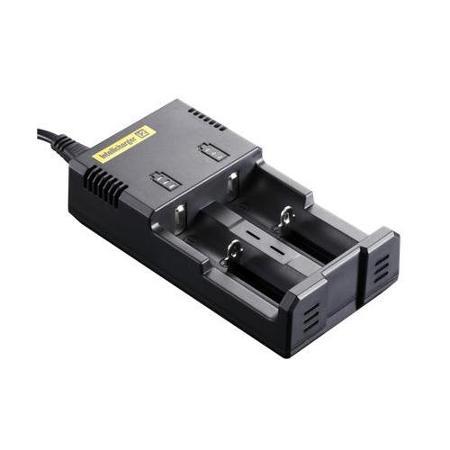 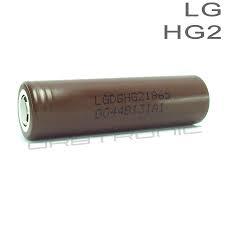 I don’t intend to sub ohm, I just really love the simplistic and elegant look of a tube mod with a Kayfun Lite Plus v2 (authentic). I plan on building around 1.5 ohms which, with a full charge should pump just under 12w to the coil. Vapor and flavor should be noticeably anemic by the time the battery needs charging, no?

I guess I’m asking if anyone is using a similar setup, what are your experiences, things to watch out for, etc…

If you’re not gonna sub-ohm, the battery seems ok. Otherwise I would have selected another battery.

Be so very careful with the SMPL - be absolutely sure that your atomizer has a protruding positive pin, that cannot be depressed. Should it depress, the positive and the negative would make contact on the battery causing a short, and you risk venting the battery.

They do look slick!

the lghg4 would have been my choice for an lg but the Samsung 25r would have to be the top choice rt now for the price… be sure to check the switch springs if any? some are really weak and do become less effective…

Be so very careful with the SMPL - be absolutely sure that your atomizer has a protruding positive pin, that cannot be depressed

I was a little concerned about that as well. My Russian 91% clone has a 510 pin that isn’t protruding as much as I’d like. I’ll probably stick that one on the Phenom since it has an adjustable pin, but i’ll give it a good once-over with my Fluke and make sure it isn’t shorting before I ever slide the battery in.

If you’re not gonna sub-ohm, the battery seems ok

I have no desire to sub-ohm. Been there, done that. I’m a MTL vaper and that’s what I enjoy. I realize the battery is only a 20A, but with my intended use, I’m hoping for some decent battery life. I’ve heard some good things about these batteries being used in regulated mods.

I’m a MTL vaper and that’s what I enjoy. I realize the battery is only a 20A, but with my intended use,

Just a note: The only reason that the battery you have chosen rates at 3000 mAh is that its cutoff is 2v whereas most other batteries cut off at 2.5v. It still performs very nicely though (it might even be better than the 25R for your purposes). I doubt you’ll get a good vape at lower voltages though

I had intentions of recharging at around 3.2v. If I want the full capacity of this battery, I’d likely have to kick it anyway, right? 4.2v - 3.2v vape time should be decent shouldn’t it?

I use Mech Mods but not in the way you’re intending to use yours.

What I can tell you though is that one time I did use a Nautilus on my Mech at 1.8ohms and even on a fresh charged battery it still didn’t hit anywhere near as hard as my at the time MVP2.0 at 11W.

@daath is very correct to warn you about any hybrid top mech mods and your centre pin on your tanks/atty as hybrids use only the batteries + to make contact with your atty.

If you wanted a pretty good vape that still allowed MTL you could try some builds around 1.0ohms using the higher gauge wire so that ramp up was quicker.

I use the I2 charger. It’s a good little charger.

vape time should be decent shouldn’t it?

Yes, in that range, you should get plenty of vape time!

If you wanted a pretty good vape that still allowed MTL you could try some builds around 1.0ohms using the higher gauge wire so that ramp up was quicker.

I’m currently running a 1.3ohm non-contact 28g (7 wraps KA1 @ 2.5mm) in my KFL+. I’ve been running it on an iStick50w in vv mode between 4.2v and 3.2v to try and get an idea of what to expect from a mech. I understand with a regulated device I’m not getting a voltage drop like with a mech, but it should be a similar experience, no?

I take it the VA Phenom is a clone, yes?

I take it the VA Phenom is a clone, yes?

Yes, I’m not certain of the manufacturer, but it’s sold here.

The mods took nearly a week to arrive, but I’m extremely pleased with my choices. The KFL+v2 (auth) is sitting atop the ViciousAnt Phenom (clone), while the Tobeco Russian 91% is perched on the SMPL (clone). I just love the simplistic and elegant look. 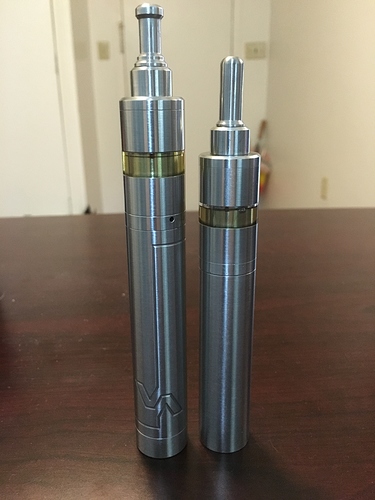 Are they both hybrids?
I’ve got the Tobeco A-mod SMPL and love it, and was a newb to mechs when I got it.
I’ve got a couple of different RTA’s and one where the pin wasn’t as far as I’d have liked.
If you’re able to, unscrew the center pin and disassemble the deck and center pin bushing.
With it apart I was able to lap (sand down) the collar a bit so the pin protruded further away from the collar (ground). It doesn’t take much effort and will give you piece of mind.

The battery tube portion around the button was a little longer than I liked, so I lapped that down as well till it was more comfortable when firing the button…even added a little cut out on one side for my finger.
For me it’s the little things that make all the difference.

Why that battery though?
I love my yellow LGs more than my 25Rs

They are both hybrids, though the SMPL doesn’t have a removable top cap, nor does it have a center pin. The Tobeco Russian’s positive pin protrudes enough that I’m not concerned about a hard short. The Phenom is also a hybrid with a removable top cap and adjustable center pin. The KFL had a slightly more recessed positive pin than the Russian, though still protruding, so I am using it on there.

Why that battery though?

I specifically chose that battery for three reasons. I have no intention of sub-ohming with these mechs, I’m currently running 1.3 Ohm builds. I may use them in a regulated mod in the future, and the almighty Phil used them in his Vaporflask with some unbelievable battery life.

The VA Phenom looks like it was made to couple with the Kayfun v4. My new favorite setup. 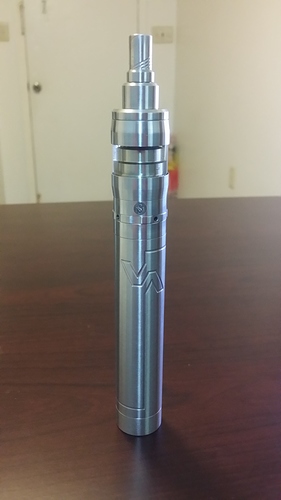 Question!
Of the two switch types, do you prefer a mechanical (aka spring) assembly, or a magnetic?
Have you noticed one type lasting longer than the other?
Is one more reliable/conductive than the other? (Less V.droop)

I do have both types of Mech mod switch types; spring and magnetic. I really don’t have a strong opinion on either one. They both function just dandy, if you’re paying attention to your coil build and safety aspects. Either one can be damaged. Both can have about the same voltage drop.

Springs can be damaged by a dead short. The spring can be heated up and lose its tension.

Magnets can loose their magnetic quality and/or weaken from the user generating too much heat on the draw; requiring too much ampacity from the battery to fire coils below .5 ohms. 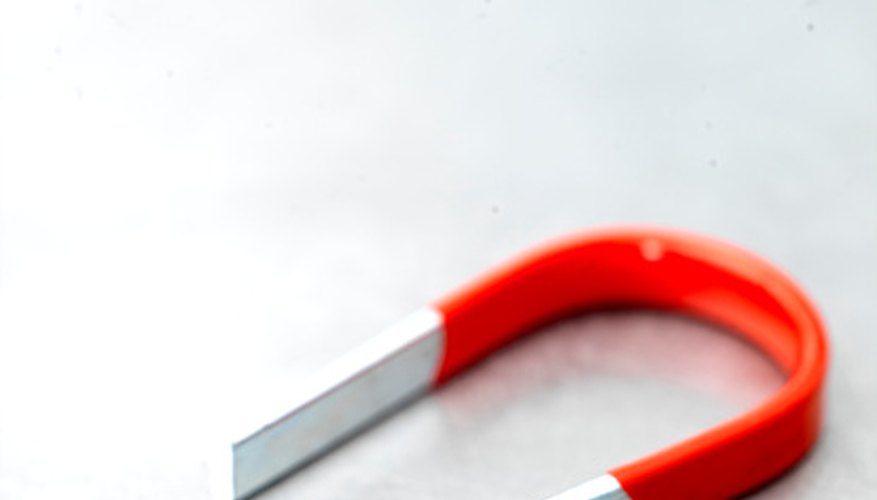 What Causes a Permanent Magnet to Lose Its Magnetism?

Permanent magnets are called as such due to inherent properties called spins, that cause them to be magnetic. There are several factors such as heat, time, and stray magnetic fields that can alter magnet strength. If magnetic domains are misaligned,...

Most of my builds are well above .5 ohms (vaping NET kinda requires higher ohms for a pleasurable outcome). The springs in most mech mods these days are rather beefy, due to users wanting as much ampacity going to their coil as possible. The springs in earlier mechs were rather wimpy and easily damaged by heat… eventually the manufactures got the idea users needed springs which could “take the heat in the kitchen“.

I’ve never damaged my magnetic switches, but I’ve read where it can happen.

When I’m purchasing a new mech mod, if it’s possible at the time of purchase, I usually go ahead and buy replacement springs or magnets at the same time from the vendor. As we all have experienced, once the manufacturer goes out of business or that particular mod goes out of style, it’s a total bitch to find replacement parts for those mods. Planning ahead should always be a part of the Vapers creed! (often a hard and sad lesson to learn, for some