Just because I know most of ya’ll love the gory stuff,
So last week my right side started hurting, thinking maybe i moved or picked something up the wrong way to make my side hurt like that. Well five days later the pain not getting better, this morning I took my brother to the Dr, so i ask about my side. Next thing i know there admitting me in the hospital for Acute appendicitis
Im out of the hospital now with a drain tube, till Tuesday.
Then they will set a dade to remove the appendix.
They asked if i smoked I said I quit 8 years ago, they said my lungs sounded great. This is where i asked what they thought about vaping, Bad question.
I laughed at them saying my great sounding lungs are partly due to me stop smoking and vaping.
All the two Dr, could do was look at me, 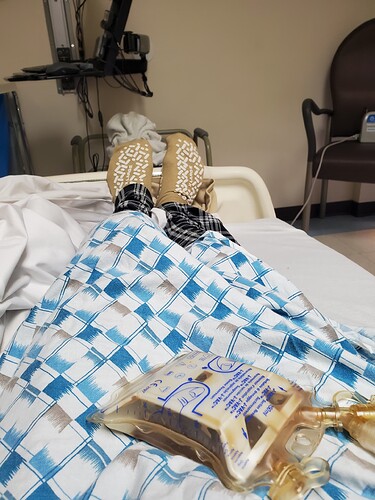 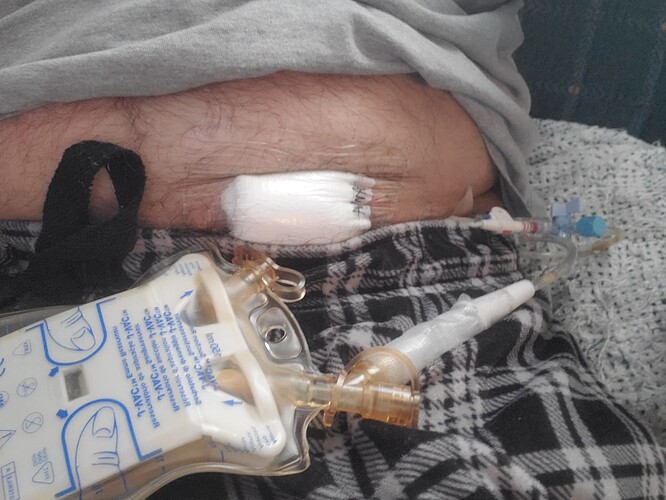 I went through that. Quite the ordeal. Get better! It will go well.

Regarding vaping, I get health care through U of Michigan hospital system. They have very strong political leanings and a real propensity for one size fits all published policy regarding many treatments. When vaping is mentioned it is most typical to get the rehearsed paid political announcement regurgitated. As time has passed I have become more savvy with my vaping statements and most often get a passive form of agreement, lol. Even on my charts they have finally differentiated between tobacco use and vape nicotine use. The other thing I do is dismiss any doctor that refuses to acknowledge the benefits of vaping as it effects my health in a very holistic and widespread manner. A refusal to work with vaping makes a doctor ineffective and I will have that doctor replaced. I am absolutely welcoming of any modifications to my vaping e.g. VG/PG ratio, possible side effects of flavor additives etc. but completely intolerant of the “vaping bad, no vape” party line. The other thing that I do is take a leadership role in my health care. Thursday I had a colonoscopy and they discovered diverticulitis. Friday I called in and scheduled appointments with my general physician and nutritionist with the agenda of creating a treatment plan. I set both as virtual planning sessions.

I’m old and this is what old looks like so let’s get at it and get on the same page.

I had my appendix burst while I was sitting at my PC recording guitar tracks. I tried to ignore it at first, thinking it was a bad stomach ache. Normally I’m not one to show the pain I’m in, but the wife(ex) noticed me doubling over all teary-eyed and summoned an ambulance. Not a particularly fun experience. Later I discovered, to my surprise, the surgeon actually went through my navel to extract the damn thing. My “outty” is now an “inny”. I too had a little drainage bag I carried around for about a week or so.

Doctors and how they feel about vaping, seems to be a crapshoot in my experience. Some look at you like you’re nuts, and tell you it’s not good for you, and others give you a thumbs up! At least it seems like more doctors are starting to realize the truth though. Glad you’re back home now. Unexpected stuff like this is never fun.

That’s not good but glad ya on the mend,one thing that’s come from this now you know how a squonk mod feels like

A colonoscopy is what they want todo next then remove the appendix, ii feel the same above Dr’s being closed minded towards vaping, to me their worthless

I’m 58 and recently had a full well man check with no problems which is a good thing But I had to argue with the nurse as I was told even though I’d given up the stinks because I vape I’m still a smoker ,
Work that one out if ya can

Kewl, I like gory stuff. I just can’t take the puke and poop. I would not make a good nurse.

Glad you got yerself straightened out. My neighbor had to be toted away in an ambulance due to his appendix. I hear it’s terribly painful.

This was my third colonoscopy. The second one was a complete failure. They put me out and when I awoke I asked them how it went. The doctor, with an indignant tone no less, told me it didn’t. He said I came off the cot swinging and they aborted the procedure for their safety. This latest team had some balls to try it again but many years later, lol. I quite frankly perceived my response as appropriate.

I received the same response. Went to a Dr. to have a health check ages ago and I was listed as a smoker. Therefore the usual lecture ensued to which I replied I’d given up utalising vaping and still vaped.
His response was that vaping was just as bad as smoking, I should stop it immediately and he was still listing me as a smoker. No amount of explanation swayed him.
As far as I’m aware I’m still listed as a smoker. I’ve visited the same surgery many times since and if asked now I just say I gave up years ago and don’t bother qualifying the answer.

Glad your OK @Fordf150_Angelo, all things considered…
Hope you a speedy recovery buddy

now I just say I gave up years ago

Exactly what I do and my doctor (been going to same one for 8 years now) say’s I am a poster child for health… lol.

Hope you get better soon @Fordf150_Angelo .
In the Navy in the late 70’s one of our guys in the boileroom had his burst.
He was in serious pain. Pretty scary because none of us down there new what was wrong with him.
We grabbed the Corpman. He knew it was his appendix but he wasn’t qualified to remove it.
We got along side of the Carrier in our group and we used shot lines and a large rescue basket to transport him over to the Carrier.
Made matters worse it was night , raining and the seas were rough. Our Destroyer was bouncing around like a cork when we did this.
The Surgeons on the Carrier got him fixed up and 2 days later the Helo brought him back in a basket and lowered him back to our ship.
He was fine after a few more days.

@Fordf150_Angelo I wish you a SPEEDY removal of that infected organ, and hope they get it out soon for you. Never want a rupture for sure. Glad you got in there and have a course of action. I’ve had a few friends that had ruptures, and it was MUCH harder to deal with.

Regarding the “great sounding lungs”, and “vaping”, plus the blank stares, I’m not surprised. I mean, after all they ARE the experts right ??

Stay strong, get that baggage removed, and get home. Sounds like YOU might be more of an EXPERT than they are.

As time has passed I have become more savvy with my vaping statements and most often get a passive form of agreement, lol.

@SmilingOgre well I’d LOVE to hear more about THAT ^^^^ aspect.

Doctors and how they feel about vaping, seems to be a crapshoot in my experience. Some look at you like you’re nuts, and tell you it’s not good for you, and others give you a thumbs up!

Maybe the majority only know of the lung issues caused by the Vitamin E Acetate, specifically the THC black market pods with the Honey Gold or whatever that thickener was called. Maybe they’re afraid if they even UTTER that it MIGHT be safer, they’ll get sued. God only know.

As we all have seen/heard that “Dr’s” think they know/have all the answers and are not open minded enough to think there are better way and answers out there other then what they come up with.
If it looks like a duck, sounds like a duck, walks like a duck it’s a duck. It’s ashamed WE are more of a Dr then a “real” Dr

I hope you recover well, so if you’re getting your a appendick removed is it a appendcanal now?

(1) Seinfeld Clip - Get Well, Get Well Soon, We Want You To Get Well - YouTube