Has anyone tried or used Monkfruit or more specifically the by product of the mink fruit, mongroside, as a sweetener?
I know this came up when researching the stevia clone thread as an alternative sweetener and I put it on the back burner as I had a lot of things on the go!
Seriously looking to research further into this as a sweetener.
The powder extract, Mogroside, does sound very promising and could be a great alternative for a natural sweetener without the sugars.

I found a commercially available powder sweetener, Lakanto, http://www.lakanto.com. It also contains the ingredient Eyrthritol?
No idea if that is safe to vape?

Be interested in your thoughts and input on this?

Nude Nicotine and others sell both Monk Fruit and Eyrthritol. I’ve been using both for about a month. Would recommend using them if your interested in sweet ejuices. Worked very well as heated shake n Vape. Coils have been lasting as long as if no sweetner added.

Please try it would be nice to hear others opinions on them.

@Ggrhauling thanks for the info.
I have ordered some monkfruit Eyrthritol powder so hopefully will mix some up by the end of the week.
Really looking forward to trying this out!

I’m a newbie, who has extensively studied alot in here, and YouTube. I just mixed my first flavors last weekend. And I know I’m wanting sweetener in them. But I refuse to use sucralose. And although I think people are using stevia successfully, I’ve read it is only stable to 180°. Take that for what you will. Maybe it doesn’t caramelize. Maybe it’s perfectly fine. But nobody really knows. So, the 1100° stability of monk fruit, has my interest.
But this is the second thread about it, that just suddenly ended, with no good feedback
Seriously made me question it. Lol.
I should probably make a fresh post about it, and get some big dogs to chime in

Lol
No still very much alive and kicking!
Yes I ordered the monkfruit but I could only get the Golden, which is more akin to a brown sugar replacement.
It has caramel taste to it and wasn’t as concentrated as I’d thought for sweetness.
Not what I was looking for but I just cannot seem to get the white here in the UK?
Actually have not gave it much thought again til now so will try and source something? 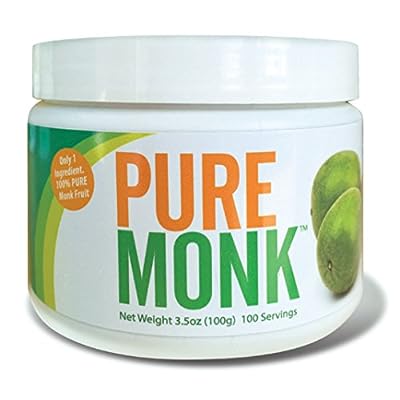 The best tasting & best for you sweetener in the world. Only one ingredient.

Bump to keep this thread alive, looking into monkfruit and I am very interested and I love sweet vapes!

C’mon, there has to be someone out there with some experience!

I think we’re alone in this. Lol
I’ll probably just break down and order a bottle from nude NIC, to get me sweetened up until I figure out what I am doing. Lol.
I mixed some of this Pure Monk powder in VG tonight, at 5% by weight. And it’s not looking very promising. I may end up trying to use this shit in my tea and coffee, and continue ordering it from nude.

I wouldn’t say alone.
There are there are a bunch of threads on this.

I think the lack of enthusiasm is that it doesnt really hit the mark of surclose. That’s why people are searching for.

This search includes me.

Ive spent quite some time researching a source for concentrated monkfruit as well. Ive gotten bags of the other sweeteners for mixing but haven’t found a suitable monkfruit concentrate other then the pre-made stuff from Nude Nicotine and I’m not desperate enough to order from them again yet.

I have it but when I used it, it seems weaker than surculose so I tried it around 1-2% this was Nude Nicotine’s Monkfruit in a Vg base. I liked it , it was sweet in a milder way than surculose or stevia seemed to me to be a lil more of a natural sweet than artificial one. Hope this helps.

Thank you for this, this seemed to be my experience with erythritol as well. I used 1-2% and it was very mildly sweet for such a high %. From Nude Nicotine as well.

This is the one I just bought and am trying out. I like it. True sugary taste, and does not gunk coils. I also hate sucralose!

Try the Pure monk fruit that shown in the picture comments below because the erythritol can throw off your recipes by muting them out too much. NN’s is good.

From all my studies it is safe to vape and has an extremely high burn point so it does not gunk coils like sucralose.

Hi guys, hope your all going good. I to have been looking at alternative sweeteners and I’m really keen to give them a go. I’ve been using Nude Nic for about 12-13 months but had never tried their solutions I just received my order from them yesterday.
Monkfruit 10% PG
Erythritol 5% VG
Stevia 7.5% PG
I’ve only finger licked them so far, a fair few times each since yester, Erythritol tastes nice seems mellow, Stevia tastes sweet but bitter, Monkfruit is hard for me to describe bitter at first then sweetish very different, the colour is sorta like green tea or like a pale beer colour.
I really dig the glass vials very solid glass with good caps. It would be great to see what you guys and others think of these?
I also received their sour pack so if anyone’s had experience with those solutions I’d love to hear as well, thanks guys. 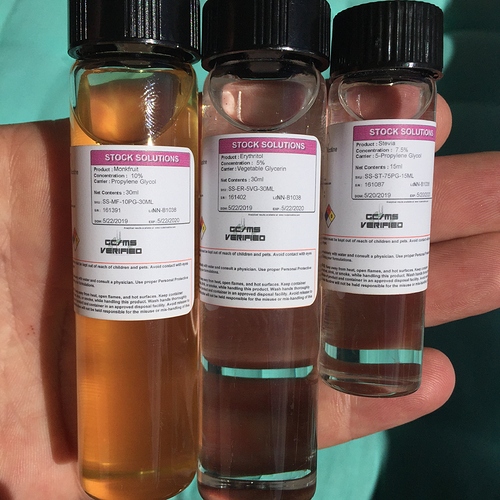 Hi @LianazVapin! I’m glad your enjoying them and thanks for the message. I made a fair few fruit mixes late last week I still haven’t tried them yet, I used the NN Stevia & Erythritol in about 3-4 of them, I wasn’t brave enough with the Monk fruit at that time. Really hoping to just use these sweeteners one day.
Thanks again your message is so helpful,
Take care LianazVaping.

Please let me know what you discover!