I’ve been raving about this thing in other threads and I just thought I’d make a new one since I didn’t find one in a search. Note that I am talking about the small sized “S” model. The “S” is important. With all the great tanks lately, I have been really hesitant to buy an RDA. I mean dripping tastes better, but tanks like the Bellus are so close to the Plume Veil RDA that I’ve been off dripping for awhile. Enter the noisy cricket and the fact that I want a stealth nic hit at work every now and then. . .most know I never smoked and very rarely use nic, but sometimes I get sleepy. Anyway, I need something stealthy that I can take a 1 second hit from and hide again.

Anyway, I picked up the Mutation X S in black for $30 and put it on my $30 Noisy Cricket with a couple of 25R5s. Great batteries for high pulsed current as they have a very low series resistance. Anyway, I haven’t built kanthal in awhile and was too excited to go to steam engine so I ended up winding a 1.5ohm single coil, 28/32 spaced kanthal Clapton on a 3mm ID. On the NC these things DRINK juice, so hemp wick is a must! Honestly, I recommend hemp for everything non-TC and especially on the cricket because hemp wicks so freaking quickly. I’ve never gotten a dry hit and I have been vaping this setup like a MADMAN. . .I bought two other DNA200 mods at the same time and I haven’t even opened one yet. I have several new attys including a Griffin that I haven’t touched because this thing is rad!

Remember this is single coil, which I generally HATE. I gave away a Crown w/ RBA because it just did NOT do it for me. BUT, this single coil is literally vaping as well as the very best dual coil I have ever vaped on any setup, including a Plume Veil on temp control on a DNA200. I have been carrying it in my shirt pocket, although you do this at your own risk with a cricket. I recommend unscrewing the button and testing so that it cannot fire. . .as a minimum precaution. If you aren’t careful when you juice, you can get leakage out of the bottom airholes. . .but I’m an unkempt looking engineer so the PG spot in my shirt pocket is acceptable. I try to wipe it down before I put it in my shirt though.

Guys, my wife does not vape, but she sits here while I do. SHE commented on the retarded clouds that I am blowing with this. . .and they are !SO! flavorful. This build is vaping at a very cool temp, I normally like a bit warmer, but the taste is so awesome I only want to take the cap off long enough to add more juice! I’m not changing a thing until I have to.

I WILL be buying another one of these to build dual with Ti and put on one of my DNAs. Probably the Efusion. This is the most excited that I have been about an atomizer since I took my first real lung hit from an RDA years ago having only used cartomizers before. This combo is easily the best $60 I have spent vaping. It’s easy to build. . .it would be great for a beginner except of the inherent dangers of the cricket itself. Beginners really need to be careful with this thing! But hot damn am I in love. I can’t get over it. Think of when the Plume Veil first came out, then imagine the evolution of the industry to now. . .THIS is the RDA that the PV has evolved into. Even the drip tip is great!

Oh yeah, as for hitting at work. The airflow is adjustable from open to closed both from the bottom and side of the coils. The side flow is made so that it creates a vortex. Even with a hot build, if you take a 1 second hit with the cricket with the air wide open the cloud tends to be pretty thin. A couple of those with 4mg juice wakes me up for a bit. I am not completely intolerant of nic as I smoke cigars and pipes, but its infrequent enough that lung hits of 4mg juice are plenty for me. Anyway, I just blow the thin cloud under my desk and rock on. On the way home I close the top airflow 2/3rds of the way and get huge, thick, delicious clouds.

It does have some cons. The leakage if you aren’t very careful when you juice. The juice well is pretty shallow. . .but it gives a sort air path to the bottom of the coil. I think that trade is worth it. The orings are on the loose side, so without modification you do need to be a little careful that it doesn’t come apart on you. . .but if you put it on a cricket you handle everything carefully anyway, right? I think it might taste even better if they got rid of the center post and made it velocity style, but I still have a 10ish wrap SPACED Clapton that fits just fine. The shape, if not the depth, of the juice well is perfect IMO. Great little places to put your wick.

If you have $30, but this RDA. . .if you have $60, buy a cricket to go with it. NO ONE loves TC more than me, but this setup is so small, and so incredibly awesome I wont be putting it down any time soon.

I must admit, I’ve been tempted by the Noisy Cricket, even though I swore off mechs - regulated and TC is for me! I’ve started considering this one! Damn all you guys ;D

Any pics to go with your thread. Really thinking hard about buying the NC. Love the idear of the instant ramp up but a bit sceptical about the dangers.
If I’m calculating right the better/safer builds would be kanthal. A clapton or single wire running from 0.8-1.5ohm, obviously lower will be warmer.

Thats why I’m thinking about it now. Hehe. 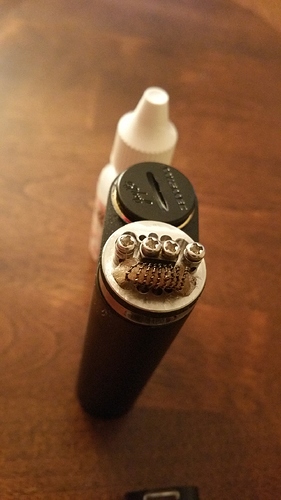 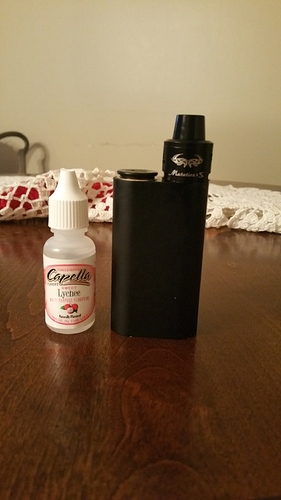 Ships in 20 days though

No reason to be skeptical guys. You just can’t throw this thing in your bag or anything. You do have to be careful as it has no safety features. . .but 8V and 25A will rock your world. I just think it deserves an atty that is this good. You’ve got to build for wicking, but seriously, go get one. I’m kinda pissed that I only bought one.

Thank you. Appreciated.
Wow that thing IS small. I’ve got the mutation x4 rda, a steamcrave rda and velocity to start with.

So I just built up this little RDA with dual 9 wrap spaced coils on a 3mm ID made from 4x 30ga twisted Ti. As promised it is sitting on my black Efusion and it just looks bad ass!

The flavor from this thing built this way is VERY easily the best flavor that I have ever had from an ATTY. I’ve been vaping a Bellus and Cthulu V2 and both are great on flavor. BUT, this RDA puts them TO SHAME! My Jacked Cactus juice is so floral and fruity it tastes like something I dreamed. It was the flavor I wanted when I developed the recipe, but never quite got in my tanks. It was good, but not THIS. My Dragon Suckle is like a punch straight in the tonsils. @LordVapor’s CNALH is like taking a swim in a honeycomb.

Seriously, people. Even if you do not currently drip, I very strongly encourage you to buy one of these. It is very easily the best vape I’ve ever had. I just found my Plume Veil that has been missing for months. . .and I do not care. My freakshow’s are sitting idle and I never even built the Hanna postless RDA. This one is just that good. 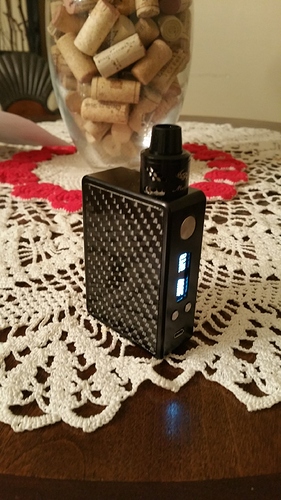 I’ve been having too much fun with the Mutation Xs Mini on the Noisy Cricket to do a Ti build on it yet. Currently running a pretty rowdy dual clapton Kanthal 26/34 at .5 ohms. Damned tasty even with Kanthal. It’s a great flavor chasing RDA for sure! With the benefits of chucking clouds like an A-Bomb. Currently rocking some of LordVapor’s Rhaegal’s Thorn in it. DELICOUS!

Haha, I burned up my build by packing my NC in my vape bag with the button loose and batteries in. Just to further illustrate my retardation I mistakenly rebuilt the thing with Ti and the resistance was crazy low. So I reluctantly pulled it off the cricket.

This atty is the BOMB! Super cool that you dig it too. TC it’s insane though, with hemp! I can fog the room and empty the atty in one huge breath, and I am not kidding. The flavor…oh man, you already know. I love this thing. How far open do you have the sides? I’m still 1/3rd open up top and all the way down low. . .which sounds dirty.

Pretty much run it like you. With this rowdy build though, I have been running it WFO. It gets too hot if I don’t.

Yeah, I briefly had a 0.5ohm kanthal build in it on a single coil. It was cool but I was getting lots of dry hits, so I threw in the towel. That was like 5 wraps of 24ga kanthal, spaced on a 3mm ID with hemp, wicks just touching the deck. What did you do with your build?

I liked the half-second room-fogging hit. The kind of hit that immediately wakes you up on nic. . .and can in no way be concealed. But I’ve gotten so used to no dry hits I have no patience for them.

that Rhaegals Thorn is DarthVapors recipe…
had to clear that up…

Running this atty WFO is a friggin hoot! That is why I need one permanently affixed to a NC. The two were made for each other. I find that even the wild builds don’t tend to spit if I start to draw for a half second before hitting the button.

I stand corrected
Thanks

I haven’t had any dry hits using either organic jap cotton, or cotton bacon. I packed the wick in pretty tight. Not squeaky, but pretty tight ala swiss roll method, but not that damned tight. Since it is so small, and the juice well is pretty shallow, I only get 3 or 4 good tugs before I have to drip it.

Since mine was single coil and same resistance as your duals, I think i was just beyond the limits.