NCR RDA - The exception to the rule?

Well I guess we can safely say RDA’s generally have a bit more flavour than a tank (there are of course exceptions to the rule).

The hardest thing for someone to get right on an RDA is wicking, the next hardest thing is getting coil building right - lets take a look at an RDA that puts both of those things in the easy column, but at a cost.

Meet the NCR otherwise known as New Concept RDA also known as Nicotine Reinforcer - it appears to have undergone the name change on some sites but not others.

I bought this RDA and that fact will have everything to do with how pissy I am about it. 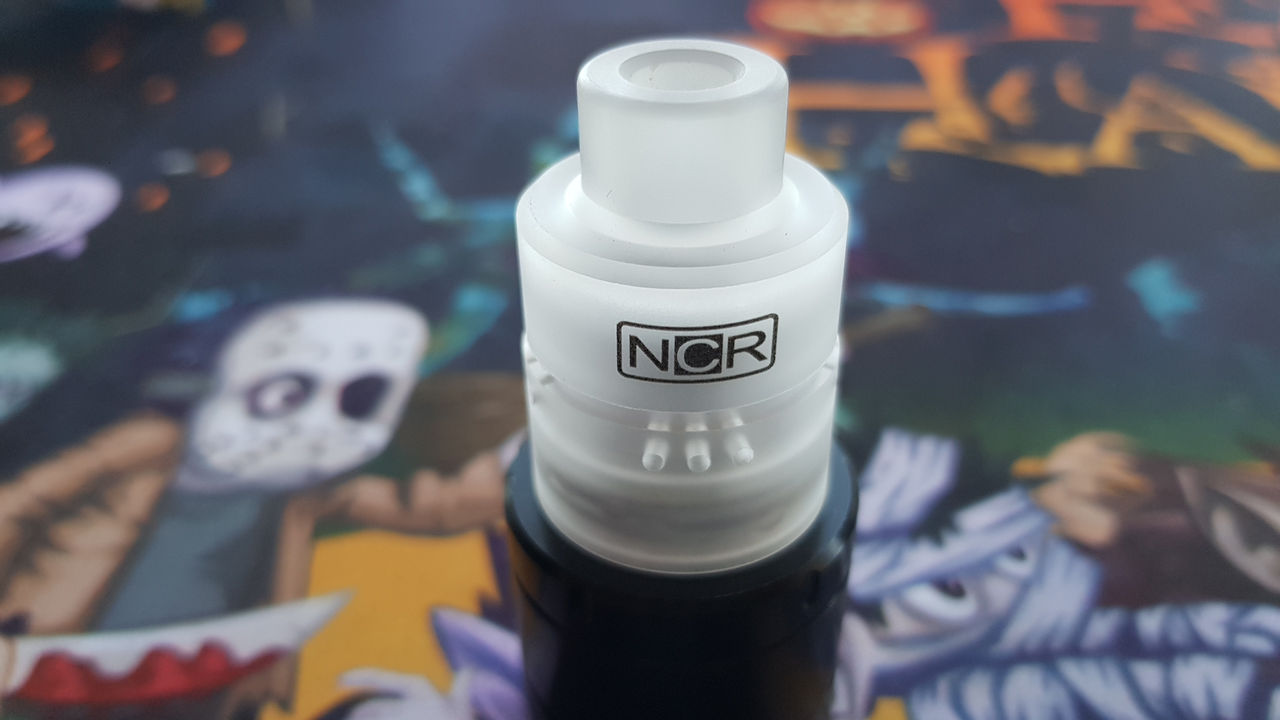 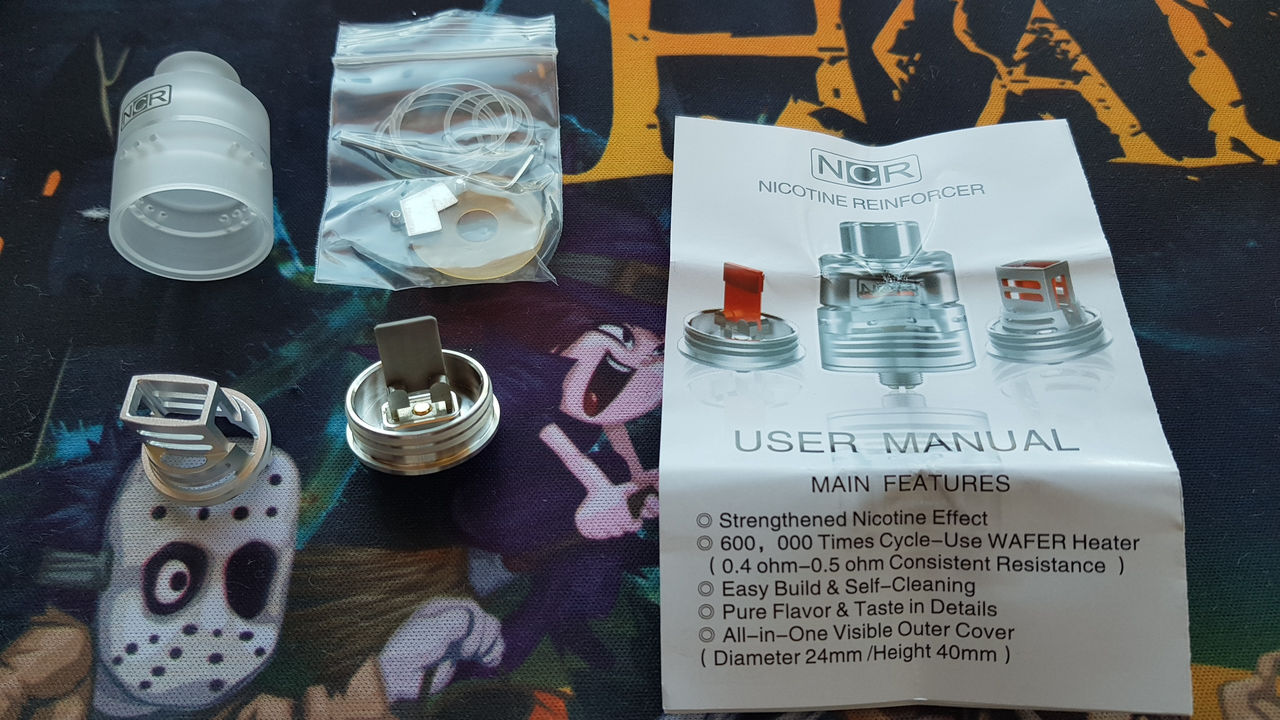 The box is a rather small affair which contains the RDA, a goodie bag with a couple of grub screws, some O rings, a heat insulator ring(to go between the mod and RDA), a few small clips (apparently used to segment the heating plate) and an allen key and the instruction booklet.

Nothing ground breaking really until you open the top of the RDA and see a small cage, which once removed shows the new ceramic plate heating element. I bought this particular RDA as a flavour tester, from everything I saw before I had it in my hand, it looked perfect for the job. If you have ever seen a stovetop coil for flavour testing - this had all the pluses of that but with a ceramic plate that is touted to have 600000 cycles in its life.

Looking at the RDA a few things stand out, there is no drip tip, the top cover is all one piece - as a result the airflow is not adjustable and consists of 12 holes of about 1 mm diameter (adjustable only with a drill). The chimney I.D. is around the 7mm mark, also adjustable with a drill.

Now this RDA is probably the easiest wicking job in the history of wicking - cut an 8mm (5/16") x 40 mm (1 37/64" ) strip from your favourite cotton pad, lay it over the top and poke it into the well - now you can add juice or put the little cage on and add some juice. Either way it is simple and quick. 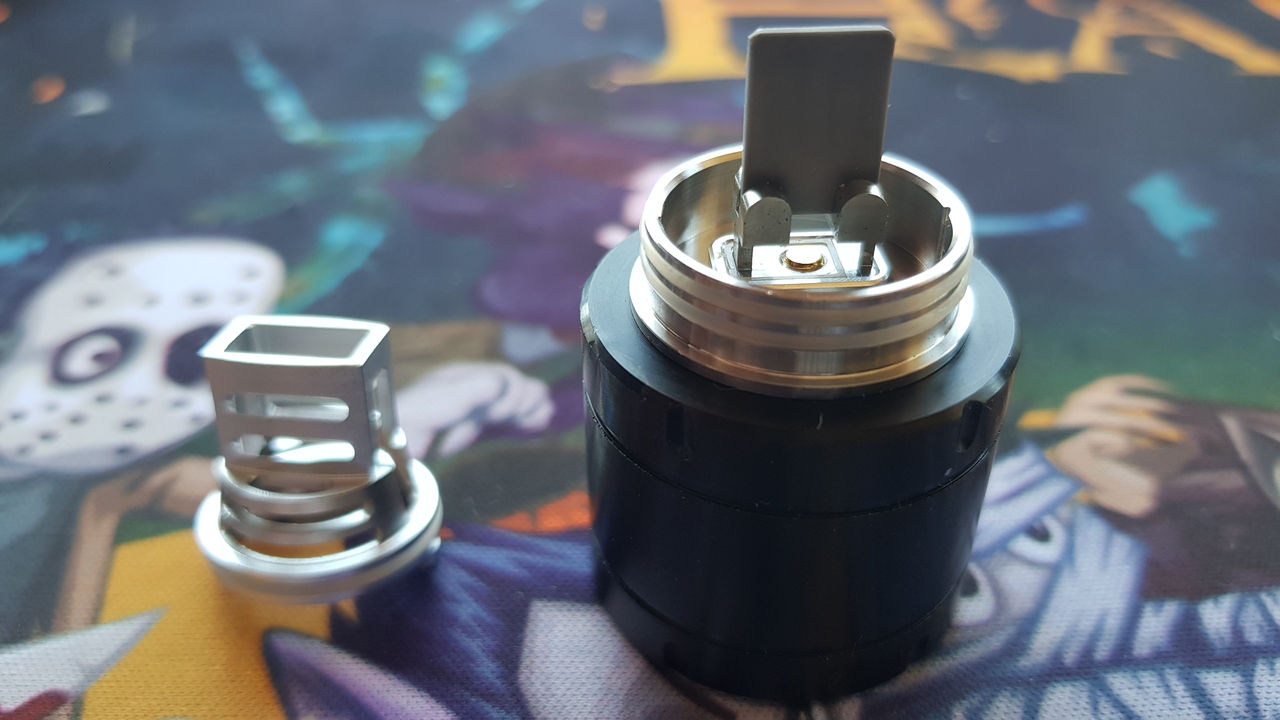 Lay the cut strip over the top. 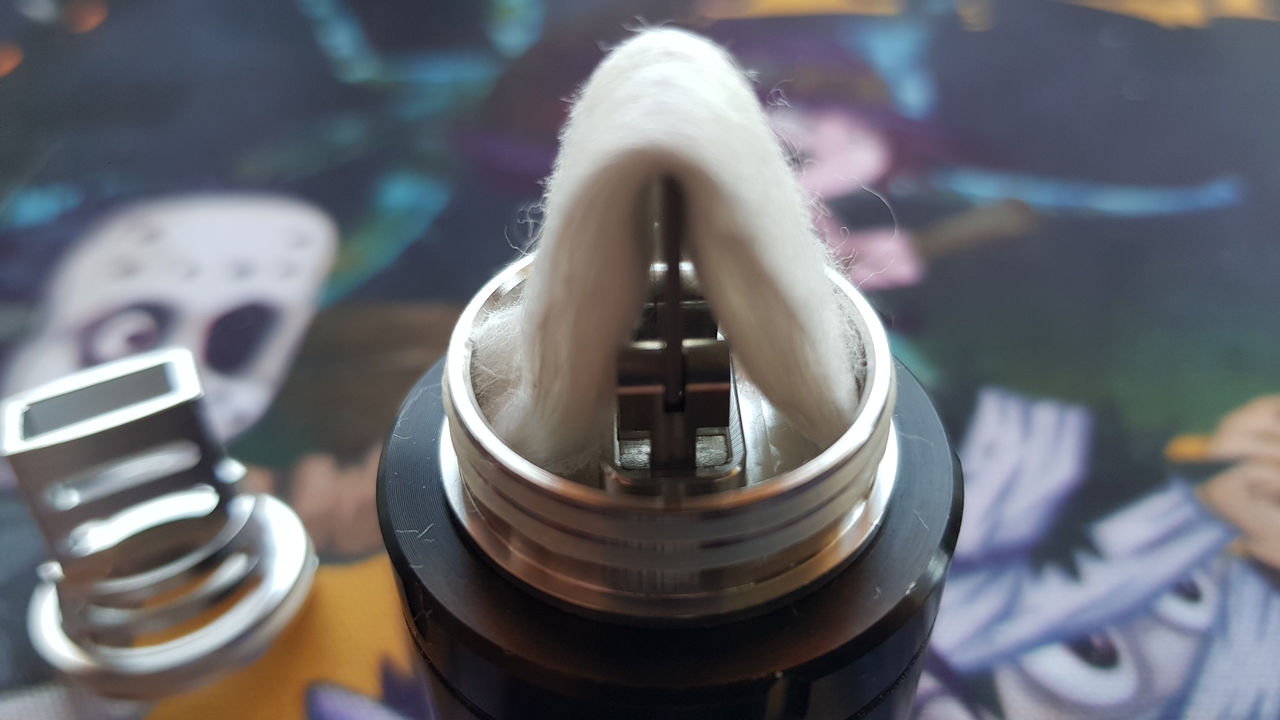 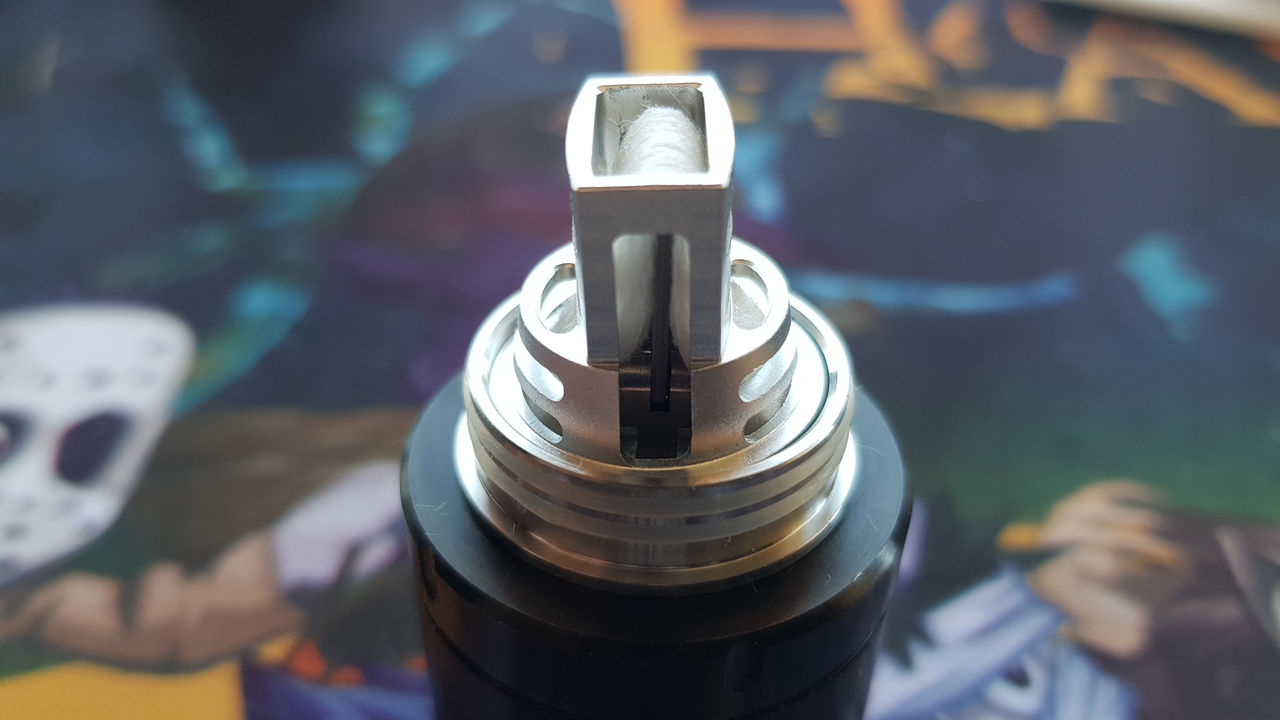 Replace the cage and add juice.

A quick read of the instructions inform you of a suggested power curve…yup lets go with that idea.

So I followed their instructions with the curve. They suggest 70-80w for .5-1 sec then drop to 60w this just didn’t float my boat at all. I cranked it to 90w then 100w then 110w. 110w gives me an okay vape, okay flavour but light on both - this doesn’t appear to be set up to chuck the fluffies. At 110w I would expect to be drowning in flavour and clouds and I was doing neither, don’t get me wrong here I had some amount of flavour and a reasonable cloud - just not exactly what I was hoping for. Back to the drawing board - I must be missing something.

After a 6 second re-wick - yup it is that quick. I tried it with two bits of cotton which fell on the shit side of vape nirvana. Unsure if the plate will crack or explode at high wattage - I thought I would give it a shot as it really wont make much difference to my looks if I blow my face off, plus it will save me time on Halloween. I was a little nervous turning the power up and chickened out at 180w, and much to my surprise it was still lacking in just about everything. One last shot - I rewicked again and loaded it up with a juice I reserve for recent converts - it is fairly high in flavouring. Sadly, it still gave me an overall poor vape. I swapped it onto different mods, all with the same result.

Lets have a peak at how long it takes to get a bit of a glow happening on the plate. At 10 seconds I had a faint glow at 110w, hmm maybe this is why I was hitting it for about 8 seconds before I started to get anything close to a hit?

Normally I would use a bit of gear for a minimum of a week and usually 2 weeks before writing a review. Over the 3 days I used this and played around with everything I could think of (including eek!!! some store bought juice which a friend gave me to try), it just failed to deliver.

Unfortunately, my conclusion is save your money and buy something else. There are a lot of great RDA’s around at the moment that deliver a far better vape than this - think Dead Rabbit, Drop, Bonza, to name just a few.

I hear people all the time say reviewers always find a positive in every review, saying things like this doesn’t suit my style of vaping but xzy type of vaper may enjoy it. Not wanting to break from this tradition, here is my positive in this review - this RDA is an awesome concept and it may well turn into a really really good idea, however right now with this model, it is lacking so much in flavour and adjustable features that it makes this review a “Don’t buy this RDA”.

Let me list the Pros and Cons and be done with it.

I know that overall this review is negative and I really hate that, because this is a really good idea - it just needs a little more thought from the vape boffins in China.

This is an exclusive product to Heavengifts but can be found cheaper elsewhere (no links - if you really want to find it, you will).

To check out how poorly this scored against other far more awesome bits of vape gear head on over to http://www.steampugs.co.uk/ and check out some of the reviews.

(adjustable only with a drill)

exactly what my thought would be

Ya i will be taking to it will the tools to see if i can make it better.

drill larger, perhaps more and use tape to AFC,

Just reminds me of those look i fixed photos that are always gold.

Great review and interesting concept, if they can nail this, it could be an awesome flavour RDA, cheers

Ya absolutely mate I love the idea - it just needs refining.

I bought this RDA and that fact will have everything to do with how pissy I am about it.

Honesty. Got to love it.

Thanks for the review and the honesty.

Cheers brother I hope they manage to perfect it one day.

I was a bit excited for a second there, but then… Oh well.

Nice review. How fragile are those ceramic plates would it snap the first time it was dropped?

I was looking at this, it seemed really innovative.Sad that it doesn’t deliver. Thanks for another great review.

Looking at them they look pretty flimsy but i am yet to break one. The .20 wafers are in presale atm and looking at the pictures reveals a little more about their construction. You can just barely make out the wire in the version that shipped with the rda I have. 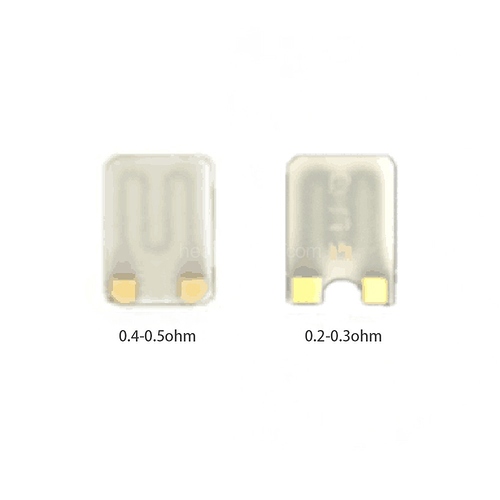 Cheers Jim thanks for your kind words.

That’s dedication to the craft right there…

Great review man, they may have something there, just need to refine it. Thanks for saving me money!

Nice one @woftam. Good on ya mate! Appreciate the honesty.

Well that sucks a bag o’ dicks. I’m sure we’ll be seeing more of this kinda thing come out soon though, I’ll be curious to see how they improve on it.
Great review dude.

Yes it certainly does - I agree we will be seeing more of this and hopefully they do improve it.

This is such a great idea and I would be all over it , it it worked. I hope someone masters it. Thanks for the great review