Need help on picking what mod to get

Does anyone know of any budget mods such as a mech mod/ box mod that you can get for a decent price? Right now I have an Istick 50W and it is having some issues, so I would like to purchase a good quality device but not for alot of money preferably atleast 50W. Looking to spend around $30-$40. I know I am asking alot for that price but maybe somebody has found something that was awesome on a budget!

Throw in another $7.11 and you get the iStick 100w from Fasttech

VapeNW has the 60w Temperature Controlled mod for $30.00
That’s the best mod I’ve seen in that price range. But if you saw you could spend maybe $50 - $60ish, there are some really good ones in that range too.

By the way, Fasttech is a Chinese distributor but has free worldwide shipping. Takes anywhere from 2-3 weeks to get your product after ordering. Vapenw will have it to you in a week or less if you’re in the US.

Upgradable to 75 watts takes about 2 minutes to do. 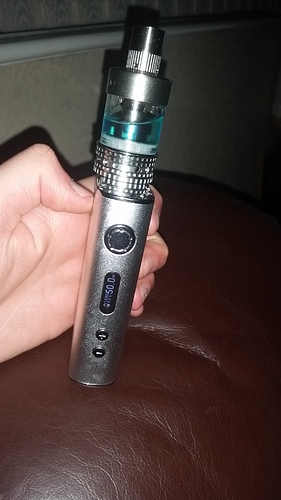 I’ve been eyeing that one for a bit, just pulled the trigger on it. But the code was only good for 5%, not 10. And I just noticed the prices on their product page do not match the prices on my sales invoice. The total looks to be correct though, so hopefully everything is OK. I kind of sent them a disgruntled email before I noticed the total was correct and sent another email. Hope they don’t hold it against me!

edit: The invoice included sales tax on the line item. I think it’s fair to call that confusing, but no shenanigans! And their sales customer support is FAST!

E vic mini. It’s a great little mod. Use mine daily and with the upgrade even better. 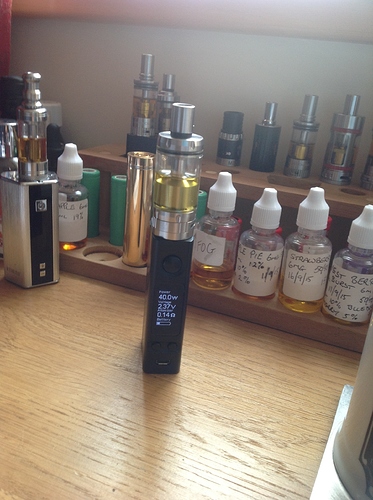 Is it lacking in the power department because of only 1 battery? And also does the tank that comes with it work pretty well?

I will for sure be keeping that in mind! Thank you!

It does 75W with the newest update. Battery life could be a concern, but I find mine lasts pretty long. I don’t personally like the Ego One Mega. I hear it’s pretty good with the RBA-section, but the stock coils aren’t very good. I’d get the mod only, not the kit, then get a better tank

I got the kit with mine and the difference in price between the mod only and the kit isn’t much. I find the tank not too bad. Vapes well with the ti coil and rda that came with the kit.
The mod lasts quite well on a single 18650.

I have heard many people were not too happy with the tank. Would you say it is alright or no? I just cant quite seem to talk myself into buying after watching reviews on youtube.

Would you recommend it? Still scares me because I could get an Istick for almost the same price.

I would say go with what you want. It’s your decision and you know what would suit you best.

I like mine - don’t use it very much though. I would get at least two batteries as well. Samsung 25R or LG HE2 or HE4. And a table charger

I have heard many people were not too happy with the tank. Would you say it is alright or no? I just cant quite seem to talk myself into buying after watching reviews on youtube.

I think I understand you’re referring to the eVic VT Mini and eGo One Mega, right? Let me weight in.

I’ve purchased 2 of these kits an eVic VT 60 and a Mini. Both times I have used the tanks and enjoyed them. Then I picked up a Goblin Mini and started using on the Mini. Running dual coils on that (26ga Titanium) I don’t get great battery life. If it was my only mod and I used nothing but the Goblin I would need 3-4 batteries to make it through the day, at least. But if I use the eGo One…well I can get a couple tanks worth out of the batteries and since it doesn’t use juice as fast, perhaps 2-3 batteries a day. The tank is ok, but not for all day. No way. Dr Seuss is in the house.

If you’re looking for a mod that will be your main one, unless you want to keep and swap batteries a lot, the Mini probably won’t cut it for you. It’s a fantastic device for what it is, but an all day, every day kind of thing? Not so much. Personally I would recommend you find a vape shop that has that eGo One tank juiced up so you can try it. My thought is you may be a bit disappointed, and if money is already tight, the extra you pay for the kit you could get a better mod that will last the whole day…like the eVic VT 60w or some others mentioned.

Well money is not really tight for me I just do not want to spend alot because I quit smoking cigarettes to save money haha. And now it seems as if in the last 2 months I’ve spent over $500 on ecig related things which causes concern. I will be saving up money to buy a better mod and also thank you very much for your input!

I went with LG HG2’s. Mistake? I don’t really see myself going over 60W - highest I’ve ever gone is 30-something on my KBox Mini.

If you’re not using them for high-power high-drain, the HG2’s are good, so no worries

What is the best battery for high power high drain?