Was planning an order to get vg and pg,some flavors and whatnot but I was wondering about strength of nicotine should I get bigger but weaker ala 24 mg or 100 mg is there a huge difference or just personal preference.

I mix for me and several other people

I think it all comes down to personal preference. Obviously nicotine is a toxic substance, some of us (myself included) prefer to use the lower strength for peace of mind (cos I’m an anxious soul), others are happy enough with the 100mg/ml strength, which requires less to get desired strength, as pointed out by @tartarusspawn.

The most important thing, regardless of which strength you opt for, is safe handling and storage. Did I mention SAFE

Thanks guy’s just wanted to be shure, unlike last time when I bought pre mixed base and added flavors, then after I did it and joined here first thing I read said don’t do that bad monkey. So just trying to be shure.

Starting off with a lower percentage is common, I did it. After NOT tossing bottles around and spilling anything, I found that I was indeed having to add a lot of it, for the mid to higher NIC level mixes, so I moved up to 100mg. Have never had an issue, break down the big shipping bottle into smaller bottles with caps (amber glass) and freeze them all, and only open one, until it’s finished. It’s NEVER a bad idea to mix safe though, so you should work with the highest percentage NIC you are comfortable with.

100mg PG would last you quite a while. I’ve had the same batch in the freezer for almost 2 years, and it’s still as clear and clean tasting as the day I got it. I wrap the tops with cling wrap, then rubber band them, put them in airtight seal bags, then into a larger zip bag with a huge poison symbol on it.

Good info I will probably go higher my job involves playing around with dangerous chemicals so not too worried about it.

@Sciin Good to hear your job involves chemical safety as you will be better prepared. Although I don’t mix using gloves, goggles, I DO use them when transfering the initial BIG shipping bottle into all of my smaller 60ml bottles. I do it because there is a much greater chance for dumping/spilling when funneling the mega jug, into the easier to handle small bottles.

Makes perfect sense. My roomate had labs last year in school I can steel his glasses and I got plenty of gloves.

If you are breaking down your big bottle into smaller bottles (great idea, as then all are in the deep freeze, only one gets exposed to oxygen), the caps matter. 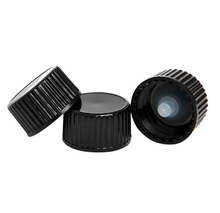 I like the 60ml’s from Bull City, and I always get the phenolic cone caps.

Was planning on ordering stuff from there anyways I’ll grab,some of them too.

It’s all about preference. Personally I do 100mg, even from the start. But you gotta have respect for handeling nic at that level. If you got kids running around or a big dog or annoying cat then a lower nic may be better for safety reasons. Just my take.

I think many of us started out with lower % nic concentrations when mixing. I started out with 48mg and was told by an experienced mixer that I would tire of this after a while. He was right, after about 6 months it made more sense and became easier to use 100mg/ml. I had one stupid (really dumb) accident early on with 100mg/ml; I generally rinse out my to be mixed in containers with distilled water prior to mixing…so one time I had already swished some distilled water in and added a couple mls of nic, got called away to do something, went back and thought there was still distilled water in the 60ml glass boston round and just emptied it (not in a sink) and got some of it all over me. It was at that moment that I realized I had 100mg/ml nic on my arms and pants …stripped quickly and showered…nothing happened. Thing is to not get distracted, put away the nicotine after using and pay attention. I’m extremely cautious when breaking down liters of nic into smaller bottles but no where near as nervous or anxious as I was when I first started out. Over anxiousness can cause accidents so just use what you feel comfortable with.

well since its my first time i got 36 mg, cause it can ship faster but when that runs low i will order stronger when i am not in a hurry.

That’s always a good start , most started with a lower nic at first. Don’t know how much nic you ordered or what nic you vape at but

I get 100mg. I always wear gloves and put the cap back on right after using it. When mixing smaller bottles I have to be careful. An extra drop it two goes a long way.

Ya better start giving that out, I’m still working on 1 full and 1/2 full 120ml bottles. Small bottles are the way to go (unless it’s premixed w/ PG or VG). But ALWAYS safety first No glove NO Vape.