Thanks. The you tube reviews, and recommendations from users, were very positive. It seemed like a good opportunity to get a well made mech mod, at a bargain price. I can live with appearance blemishes.

I like the idea of having something basic and durable,

That’s what you’ll get with a mech mod; doesn’t really get more care free. I still use mine on a daily basis; no futzing, just stick a battery in it, push the button and away you go.

Here’s a What’s Next?

Vapesourcing.com is a professional agent of e-cigarettes and liquid in china. Buy electronic cigarette starter kits, ejuice and other accessories online at low price.

Anybody else getting the feeling that some Chinese Tool&Die guys are working 24 hour shifts to beat the FDA Grandfather date? I think we about to be flooded with "What’s New"s

Not my first choices in color combos, but such is life when shopping in the clearance & sale sections.

A set up that will probably last longer than I will, for less than $20.00. I bought the Beacons & Kayfun clones for ‘just in case’ vape bunker inventory, but it’s working so well I may keep one in the present rotation. 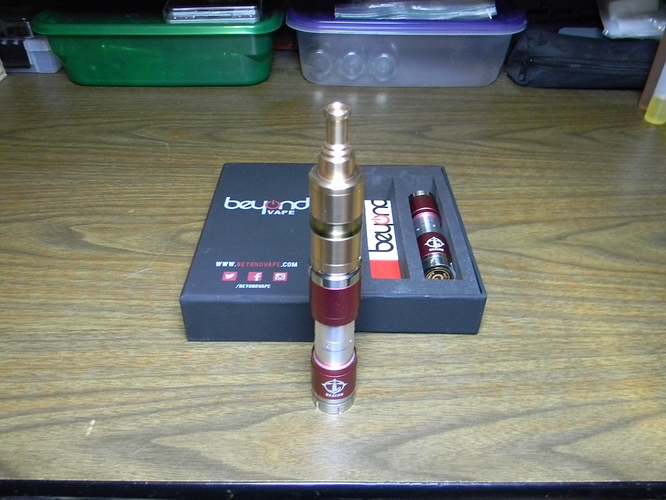 working so well I may keep one in the present rotation.

My mechs come in handy when I’m doing rough and tumble stuff outside in the yard. My “indestructible” set up includes my mech, topped with a Big Dripper.

You could run over that with a dump truck and come out smiling, whilst blowing clouds!

Silver and red ain’t that bad! Kinda flashy if I do say so myself!

Silver and red ain’t that bad! Kinda flashy if I do say so myself!

LOL… well, I’m not waiting at the door, for GQ to show up for their summer vape spread photo shoot!

In all honesty, I never considered a mech mod, simply due to not knowing enough about them, safety-wise, and the horror stories. After doing my homework better, and being familiar with ohms law & current (amperage) parameters, I did the math, and for my style, I had plenty of safety headroom. I got the digital multimeter out, verified voltage & resistance, and was good to go.

Not sure if I’ll ever make the jump to drippers, though. I’ve never been able to tame them down enough (out of the 3 or 4 I tried). Big air, little air, lotsa holes, one hole. Maybe I need to try an even higher ohm coil, and cut the power back.

Drippers were where I started out when I jumped from the ego kits to mech mods and twisting my own coils. Hehe… I still use the very first IGO-W single hole dripper I ever bought on a daily basis, as a flavor tester atomizer. Nothing fancy; single wrap, 2.5mm ID coil set up at 1 ohm; great mouth to lung hitter for flavor testing; easy to clean and rewick; 1/2 to 3/4 inch of wicking material through the coil is all you need.

I don’t think you can buy a single hole IGO-W any more, but you can always jamb a toothpick into one hole, so as to get the airflow hitting the single coil.

I wish Fisher Price made drippers…sounds like that would be more my speed.

I have one stashed around here somewhere. I’ll have to play with it a little more. It’s probably just a matter of finding the magic combination of air, coil, & wick.

Using the Kayfun/Russian bases, different looks for the mechs.
Reduces the weight quite a bit, but you have to use a little more care.
Got my eye on a red 18650 Nemesis and a couple more kayfun bases, spare parts kit, etc.
I gifted or sold all my regulated mods and had thought about getting another one, but
with the new plan coming, decided to just buy more batteries and such.

The IGO-W is the Fisher Price equivalent of a simple dripper.

You can’t find’em cheaper than this!

And so it begins
https://youtu.be/dbnVPi1fDzQ

I think that’s pathetic. Talk about cashing in, I wouldn’t be happy about paying one time to have an ID check to be able to buy vape gear. That’s just going to hit online vendors in the pocket.
People will turn to brick and mortar shops to get there supplies and inturn make them bigger.
It’s just not right! There going to take us anyway they can!
BASTARD’S!!!

Going to have to put an order in to origin vapes soon then! Cheaper to get them, posted them over and pay the tax at this end. Buy 4 sell 2 this side of the pond.
Thanks for that link by the way brother.

I just ordered 316L from LV and didnt have to do this.
But wanted to order coils and that I.D. check came up, so I canceled my order.

And they also started using UPS dont like that. I like USPS they ship to my P.O.Box where it cant be stolen.

I think that’s pathetic. Talk about cashing in, I wouldn’t be happy about paying one time to have an ID check to be able to buy vape gear. That’s just going to hit online vendors in the pocket. People will turn to brick and mortar shops to get there supplies and inturn make them bigger. It’s just not right! There going to take us anyway they can! BASTARD’S!!!

This is not surprising at all. FEDERAL law states you MUST be 18 years of age to buy tobacco products come August 8, 2016. I’ll say it again, FEDERAL LAW. These people are now looking at penalties that are much more severe than the states impose on violators. As far as cost to the business for ID verification I don’t blame them one bit for passing that on. Would you pay that cost for a $10-$20 sale which is not even 100% profit to begin with? I know I wouldn’t. Cashing in? Unlikely unless they charge this fee with every purchase to the same person. Of course this would also have to be a fair price as well. Pathetic, maybe, but don’t blame the vape vendors, blame your government…

I think with LV it’s a 1 time thing. And I dont think it’s going to be that big of a deal to me. I’m not going to pay it until we see the final rules for vaping products sold to people in the USA.

Surely theres other way of verifying your age without having to pay a fee?
I understand the vendors have to pass that sort of cost along and if it weren’t for the government, they wouldn’t have to pass it on.
On alot of sites i see age verification in the form of a D.O.B input and that seems to be enough for them to sell you anything. That then covers them legally.
Why is the government charging for this in the first place? Is it only for vape related gear?
That’s why i said there going to take us anyway they can.

I understand the vendors have to pass that sort of cost along and if it weren’t for the government, they wouldn’t have to pass it on.

So how are they passing on a cost? How is it costing them, who do they pay, and what is the cost?

Anyone who has ever paid the IRS online knows about e-signature. So unless this is something the government does charge vendors for I don’t see justification for any fee at the point of sale. If they are investing in software for this purpose then to me that’s just business overhead and I don’t need to have that itemized.