I am very picky about my ingredients, not so much so about percentages, eh?

As per requests I thought I would make this short/simple post to make it
easier in the future to locate, without searching deep inside of other threads.

With ACV & Lime juice (if preferred)

Blending:
I have only used a magnetic stirrer for anything e-juice related.
Add VG to beaker and begin stirring (5 minutes minimum for me)
Slowly add stevia powder, allowing it to be absorbed
After your desired amount of stevia powder is absorbed, add
in the ACV and lime juice, if using.
Blend for 1 hour
My stone never separates in the dropper bottle, but I still shake before use.
Always shake without any stone in the eye dropper itself, duh. 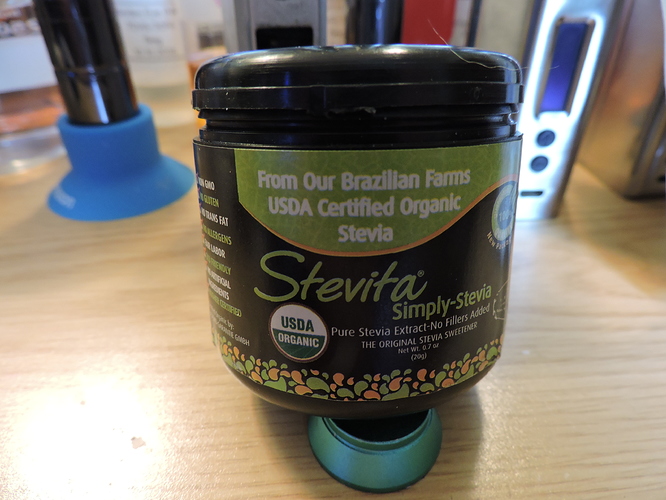 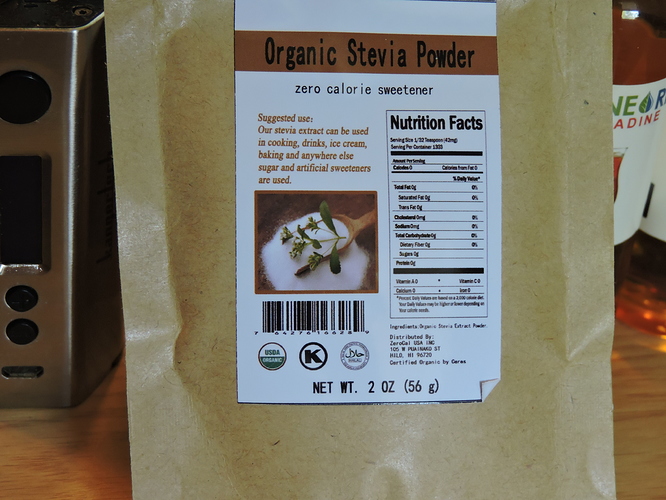 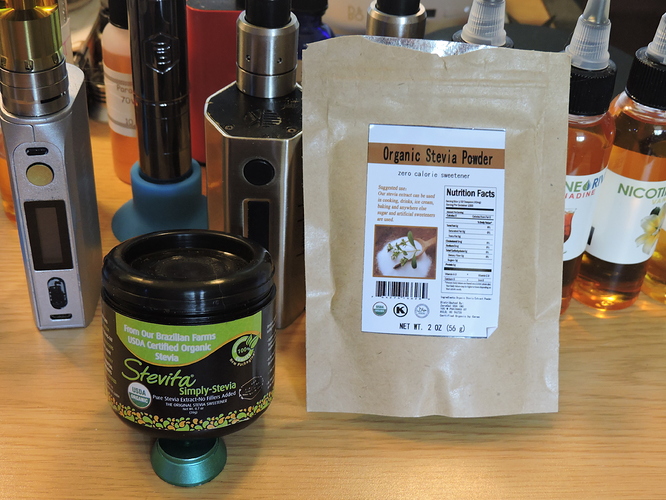 DSCN6595.JPG3258×2443 1.66 MB
25 Likes
How do I start making my own stevia sweetened liquid?
Sweetener substitute?
Marshmallow instead of super sweet?
Pyure - Testing What it does for Fruits and Harshness
How to use NicSelect Nicotine Solution
Stevia quick question
Vinegar, Saline, Lemon Juice (Old topic revisited)
Tone back harshness
SessionDrummer May 12, 2018, 8:48pm #2

@ozo Thank you very much for taking the time to post this up. I have to admit to being a ACV n00b here, and am slightly anxious about vaping it, hehe. I know what lime juice brings to the table, but in your opinion, what does the ACV bring to the party ?

Thanks for the write-up, @ozo! Just out of curiosity, have you written procedures for technical/service industries? Very descriptive and easy to follow-Thumbs up!

The addition of the ACV and lime juice is interesting…Are they there more to impart flavor, or simply to thin the mix a little? Don’t get me wrong, I love me some vinegar goodness! The idea of vaping it though makes me a little on the hesitant side and I would love to hear your input. Cheers!

The original Pyure brand stevia sweetener had a little ACV and Citric Acid in it. From what I’ve read, it does wonders for fruit recipes.

Edit: just dawned on me that you were asking ozo directly and I butted in… hope I’m not out of line!

Quite alright! I’m not too proud to take information where it’s given. Cheers! 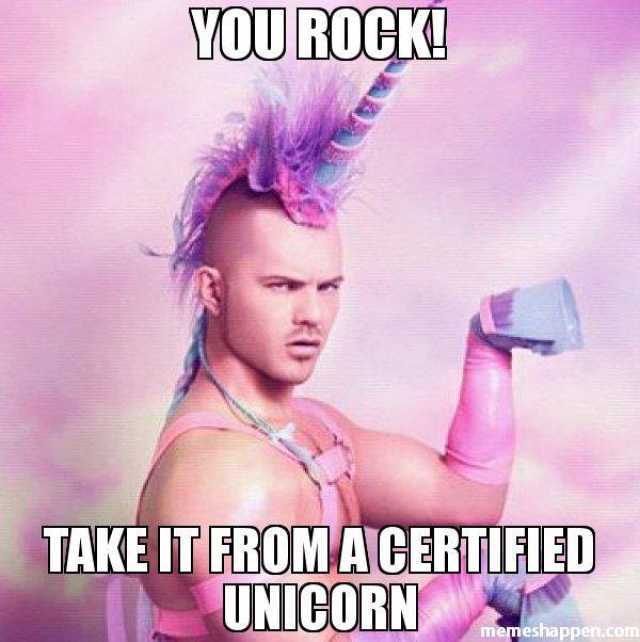 what does the ACV bring to the party ?

have you written procedures for technical/service industries

I have, mostly manuals for building codes with illustrations.
but some technical manuals for Case, New Holland, CAT, etc.

I love me some vinegar goodness! The idea of vaping it though

The ACV is such a minimal amount BUT…it changes the PH
The lime juice works 2X, not only as a natural preservative,
it also avails its’ acidity to blend with the PH changing of the ACV
In easy terms, they simply work well together to ‘enhance’ the
flavor of fruits that generally are both sugary and acidic.
Somewhat like sprinkling salt on an apple slice, or watermelon. etc.
yet not really a clear [chemical] explanation, but to understand how
it can change the flavor, eh? Maybe in a [parallel] sort of way that
how salt, when added to cabbage, can create a fermentation, but I digress.
Confused now?

and I butted in…

This is a forum…butt on in, eh? [just wash that thing first]

The original Pyure brand stevia sweetener had a little ACV and Citric Acid in it.

I wrote/responded to several dozen e-mails to/with Pyure, over a few months,
and asked them specifically why they added those two things. The first 10,000,000
answers [just kiddin’] was for a ‘shelf life’ preservative.
When I (kept) asking how they decided on using the ACV as a preservative,
they had no answer(s). They were polite and put up with me as I persisted,
and I even reached out to other ‘lab rats’ I know in hopes of satisfaction.

Long story for a conclusion, but I met some very interesting along the way.
I will do my best to condense several months.

Through an ex-colleague’s daughter I was directed to a food development
technician for Pyure. BINGO !

She [Kimber, very cordial] said that particular blend was designed for health-
oriented people that made fruit salads, fruit-based smoothies in particular,
that added sprouts, or greens [spinach, kale, micro-greens, etc.], and/or
other healthy items [seeds, powders (ginger, nutritional yeast, lecithin granules, etc.)]
but still wanted it to taste like a ‘fruit’ smoothie.

I get it…… but I told her I never saw any reference to any of that…
on the bottle or in any advertising. She laughed.

She said ‘marketing’ dropped the ball. Container was too small because it was
so concentrated [size was limited because of cost versus volume] , certain info
had to be on the label by law, and because they could not correlate the advertising
with the info on the bottle, they just never pursued it as such, it’s main focus of creativity.

I hope this gives you [anyone reading this] a bit of insight.

I make my own two stevia stones , one ‘with’ and one ‘without’ and I am satisfied
they are everything that I need for their special application(s).

Note: No Unicorns were harmed in this extensive research,
whether real or fictional. The Legion Of Leprechauns
Proprietorial Society and Foundation monitored all aspects,
before, during, and after all research conducted.
Copyright @ASCAP MMXVI

The original Pyure brand stevia sweetener had a little ACV and Citric Acid in it. From what I’ve read, it does wonders for fruit recipes.

@Plunderdrum @ozo Is this the original version ?? I’m very anxious to try this out on some fruits, and don’t know if an AIO solution exists, as opposed to having to buy the stevia, then ACV, then citric acid. 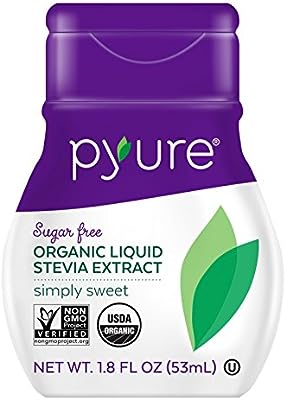 Toss this in your bag, keep it on your desk, or carry it in your pocket. It’s a totally organic, on-the-go, zero calorie liquid sweetener with a zero glycemic index to boot. Time to banish words like ...

No, that is not the one, but I will take a closer look at it soon.

This is THE ONE I have always referred to.:

Ingredients comparison between 1.8oz you posted
and the .9oz with the ACV/citric acid 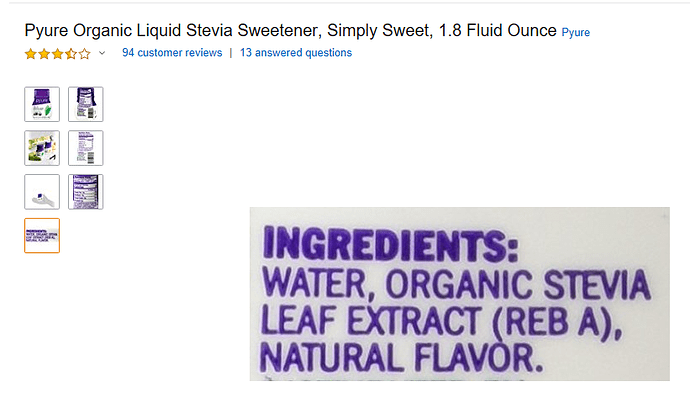 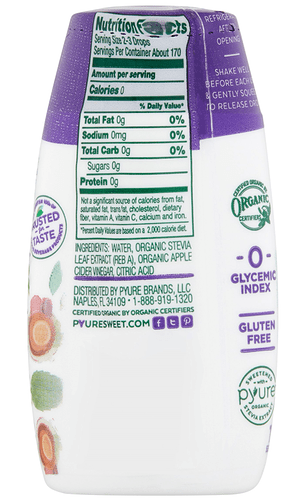 @ozo Ahhhh I see. It looks like every link to the OLD one with ACV and CA is discontinued and OOS. Hmmmmm…

Yep, hard to find………soooooooo
If I didn’t make mine from scratch, didn’t see an alternative [easily],
I would buy the 1.8oz, then add ACV and lime juice.
If I did that, I would keep it refrigerated, absolutely.

Just sticking my dagger in deeper, AND twisting it…WHO DOESN’T HAVE
organic ACV already in their cupboard? Or lime juice in the fridge? Who ?

Bwahahahaha……but if you need any help replicating, just holler.
You can also call me on the phone for ASSistance.

Heheh @ozo, sorry for the repeated simple questions, must be fatiguing LOL !!!

I do appreciate it. The wife has become, … anxious due to my current real estate usage for the hoard, so I was thinking, get one bottle instead of many (yeah, like THAT ever works). I’m actually out of both, but I appreciate the extra time you spent on this, including your preferred brands, and amounts. I’m VERY curious to see the impact it has on fruits in general.

With ACV & Lime juice (if preferred)

WHO DOESN’T HAVE
organic ACV already in their cupboard? Or lime juice in the fridge? Who ?

Well…When your wife is a chaser of all things “organic” , those things tend to simply appear out of thin air in the ice box. SWEET!

ALWAYS. It’s my natural state, most days…Thanks for the explanation, though!

What do you think of this. Will this work? I know I would have to add the ACV and lime for fruits. 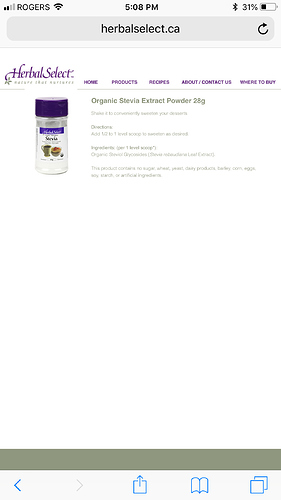 Herbal select also has a liquid. With a VG base

I can’t get the print large enough to read it, without distortion……
If it is pure powder, no additives, I imagine it will work.
What size is the scoop?

Thanks @SessionDrummer It took me a couple try’s to get the picture I did. Lol and I’m not sure how much a scoop is. Ps I made peanut butter cookies with the stevia we can’t use for my wife…and they just crumbled.