I’m really wanting just a pure, crisp, flavorful apple mix. No other fruits (unless they are adding a little something without being noticeable as a separate fruit, if that makes sense), no cinnamon, no pie. So far I only have FA Fuji and Stark, and Real Flavors apple raw extract, and obviously I’m completely willing to buy more, I just don’t want my purchase to be a complete stab in the dark. I’m not having much luck with any of those three apples as standalone flavors (although I’m still testing the RF apple).
Does anyone have a recipe you like that you just taste APPLE? Or… Suggestions on apples that play nicely together without the need for other spicy or bakery type flavors?

@VapeyMama that does sound good. I really enjoyed that Apple Buttah recipe but it killed my taster. I blame cinnamon

Loved the Fuji apple part. A straight multiple Apple would be nice and Autumn-ey Hmm maybe something asking for a couple mls of saline or a light touch of lemon.

I like the Green Apple from CAP in my Caramel Apple recipe, but unfortunately, I have never tried it as a standalone or in other recipes. It’s fairly tart.
http://e-liquid-recipes.com/recipe/882774/(Green)%20Caramel%20Apple

maybe something asking for a couple mls of saline or a light touch of lemon.

Saline is an interesting idea, that could possibly bring the flavors forward a bit. And I did have that thought about lemon or sour to make it pop.

If you buy more, the Double Apple (CAP) is really good.

If you buy more, the Double Apple (CAP) is really good.

Sounds legit. There’s thread on ELR re: Best Apple I think Double Apple (CAP) was a fav and the Grannie Smith might add the right tart.

I like Fuji FA along with marshmallow FA, Vienna cream and fresh cream. All the creams keep’em low. If it’s not enough apple I like to add I think two apples inw.

About 8 months ago, a kid at the vape shop gave me a bottle of "Never Say Pie" by Bonzai Vapor. I loved it. I've tried to clone it, but cant get it very close because I just cant get the apple right. I've tried a few different apple flavorings, at various percentages. I've mixed it with cinnamon, chai, various bakery flavors so that being said... What is anyone's favorite Apple flavoring?

I always use CAP double apple in all my apple recipes, I just found it to be the best one, a touch of sour and maybe a dash of that Pyure you all use I think you’ll be reet

Here’s what I’m thinking of doing with what I already have:

others:
Fa pear 1% (? Too high maybe? Unnecessary? Just thinking it might add some sweetness and juice)
Fa lemon sicily .25% (for a little tart pop)

I STILL don’t have any freaking pyure! I went to Wal-Mart and everything! They only had the powdered stuff.

can’t you dissolve some powder in PG? like EM?..
I’ve never done it obv but just a thought…

If I remember I always start with a single apple than added to it.

Fresh cream and Vienna cream FA can destroy a fruit sadly. I find they are not always like sweet cream tpa or other where you get milk and fruit. For which often time I like to avoid milk…but I find the FA creams with fruit takes away the harshness of the FA fruit and leaves the rest of the flavor.

Then second mix try and supplement your apple with another brand.

I had that idea too, but it had other ingredients in it that I wasn’t sure about.

Here’s what I’m thinking of doing with what I already have:

others:
Fa pear 1% (? Too high maybe? Unnecessary? Just thinking it might add some sweetness and juice)
Fa lemon sicily .25% (for a little tart pop)

Sounds really good to me. I wouldn’t go above that 1% Pear in this, maybe even .75% You could also substitute Cucumber or Kactus instead of Pear.

I STILL don’t have any freaking pyure! I went to Wal-Mart and everything! They only had the powdered stuff.

Just order some online…I think it’s only about $2 shipping. I buy the powder there when I need it, if I don’t get Stevita on ebay.
https://shop.pyuresweet.com/collections/all/products/organic-liquid-stevia?variant=23639138883

can’t you dissolve some powder in PG?

I do it all the time, in VG. It takes a while to blend evenly on the mag-mix…but it stays blended. 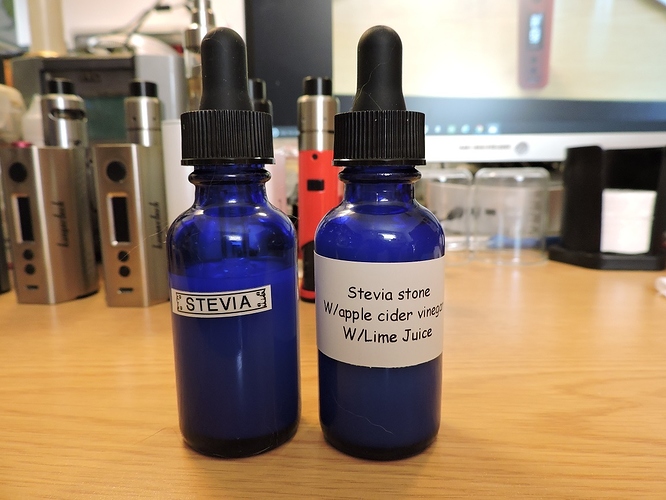 I was debating between the two…