So I’m so bored of paying a fortune for coil heads that don’t work properly and have a new mod arriving in a couple weeks. Iv used a smok TFV-4 micro for the last year or so. I’m open to the idea of a dripper or a tank. However I do walk everywhere. Recommendations fully welcome please

Why not both? Haha look into the Limitless Plus, it has a 6ml juice reservoir and the coils are above the juice in a RDA style. It has Phillips screws and it is easy to build and wick.

I have had mine for a few months now and absolutely love it!

The iJoy Limitless RDTA (Rebuildable Drip Tank Atomizer) is a rebuildable genesis styled tank which features the best of both worlds. You will experience and taste the incredible dripper like flavor along with the convenience of a tank.

Personally I like my Geek Vape Griffin 25. Put some 6 wrap 3 mm claptons that come out to .34 ohms and it works well. Very good flavor and clouds. Easy to build on. Kind of a juice pig thought but guess that is why I’m make my own juice now.

I’m also finally figuring out the TFV8 RBA deck now. Using the same build as above but getting better wicking it now. Might just be taking over for the Griffin for my goto tank.

The griffin is nice, I had it before my limitless. Personally limitless is easier to build and wick, and refilling is faster/less messy.

If you went full tank though I would definitely recommend the griffin, but once I had the limitless I haven’t touched any of my other RDA/RTA’s.

I run a Griffin 25 RTA @ 25-30w with pre built Vaping Outlaws .35ohm Claptons so i can only share my experience with that.

Slow steady draw with top airflow off and bottom airflow half closed for flavour.

Wick this right and its beautiful, wick it wrong and you end up with juice pouring out the airflow which then miraculously fixes itself

Love my Griffin it goes with me everywhere.

The portion about wicking… Hence why i moved on. Otherwise stellar tank

Tempted by both! The limitless plus was top of my list tbh so our doing a good job of making My mind up for me here. If You could just Convince the missus I need it now then I’m sold! Thinking about the wotofo troll for the dripper. 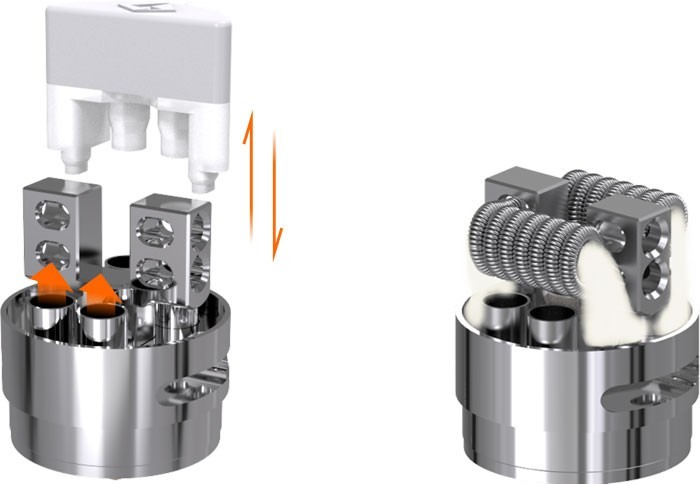 I have two that I’d recommend.
One is the Theorem, and the other is the Limitless Plus.

Both are awesome for being easy to build on, great flavor and vapor too, but best of all IMO is no BS leaking from the bottom air holes going straight into your 510 pin!!

Prefer them to both the Boreas and Cleito at this point, though both of those are very good as well. The Boreas is muted a fair bit by comparison (when it comes to flavor), but it definitely chucks monster clouds and wicks very well. The Cleito is awesome flavor, but a bit tricky to learn to wick. Though definitely a great flavor tank once you’ve learned how to wick it.

As for RDA, the Troll V2 is number one on my “to get” list due to the top/side airflow, being 22mm, and having a 10ml juice well. Nothing else even comes close for that particular style of RDA so far. Though honorable mention has to go to the original Tsunami!

Need more information on this “doddle” and where to get one. Lol

I know what a piddle is, as well as a doodle, and even a diddle…

Troll V2 is firmly on the wants list I think. I’m getting a uwell crown and a tfv4 mini with my mod when I buy it so may get the troll for at home and just use one of those two when out and about

I’ve been pretty happy with my atomizer supreme 25mm. (Rdta) Tempted to buy another. Around 50 dollars

As for rda’s. Cheep and affordable. Geek vape tsunami 25mm…just gotta be car full about over dripping. 28-39 dollars.

Another rda vote for affordable…velocity v2 cloned by tobecco. Around the 15-20 dollar mark

Kayfun v5 clone by ?smy? (Check fornthreads on which clone). Granted I have the authentic but may be personally in the market for a clone as well…authentic is around 120 vs clone for 35’ish.

Thanks to everyone for the recommendations. Lots of reading up to do tonight! Thanks again for the help guys and girls.

I’m debating on buying the griffin. Just wanna know if it’s the right one for me. I’ve been in the market for an RDTA. What did you end up picking winsor?

Still not 100% chosen yet but I’m actually rather taken by the ijoy tornado nano currently.

The Aromamizer is a great RDTA I use mine daily for my Bust-a-nut, awesome flavour, and the Tsunami is a great little RTA, easy to build on and great clouds and vapor.
second choices would have to be the TFV8 and the Kennedy RDA, with the Kennedy I love the fact that you can just pop the top on and you’re away, no lining up any air holes, great for vaping in low lit rooms unlike the Tsunami.

If we are talking about RDA’s The Goon need to be mentioned as a really good one up there with the Kennedy, Twisted Messes2, Twisted Messes 24, Dotmod Petri v2, The Recoil and the list can be made longer

Anyone used the geek vape avocado? I quite like the idea of being able to mess with the build even if the tank is not empty. Would save a lot of hassle in the beginner stages I presume.

Hey… Aromamizers $5 at VapeNW ha???
http://vapenw.com/aromamizer-rdta-by-steam-crave
I had written below and then I found the above.

I just kinda switched from the Aromamizer to the SMOK RDTA. The flavor is identical, the deck is larger, and you’ve got the top fill and juice control. Besides that, VapeNW had them for $19.99. http://vapenw.com/tf-rdta-by-smok
Can’t beat that price. I’ve got 3 of them now and I love em. You are getting good SMOK quality. I’ve had many tanks come and go, because I only keep the ones I like. This one is a fav for me. I like Aromamizers, but the price is outrageous. I feel as though I am not sacrificing and in fact, I am gaining a lot. Ya, it’s 24 mm rather than 22 mm, but that seems to fit better on most of my larger mods now-a-days anyway. To travel, you can turn it upside down, open the juice flow (ccw) and then close it up and put it in your pocket and it won’t leak. When ready to vape, just turn a bit (cw) till you see some bubbles and your ready to vape. Love it. No leak, easy to build, taste is the best and price is amazing. You can fill it like an aromamizer from the bottom if you want too. But, who would with that nice top fill. Andy yes of course you can access the coil when it’s full of juice. I also got a SMOK G4 with four coils recently, and I’m enjoying it too, Here’s a link to that one only $15.99.Later. Joy