I was just flavour testing what I thought was RF SC Sugar Cookie at 2%. I tasted nothing and then realised I might have been sent the non concentrated VG version which I had to mix at 8% in order to get any taste.

Just wondering am I missing something. Cheers in advance. As you can see from the picture, it says Super concentrated but not sure it is.
. 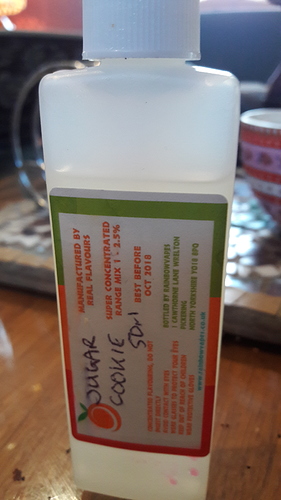 Could be a mistake. All the SC concentrates go good at 2.5% as a single mix. Are you adding any other flavors?

Looks a bit wrong to me is it thick like vg? 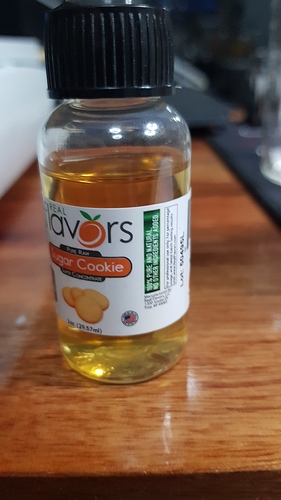 Now my neck hurts from trying to read your label!

The recommended mix % is the same as a sc rf but since its missing the ingredient part it is hard to tell, I would contact vendor perhaps they had a mishap w/ wrong bottling rebottling, that make sense, and tried to let it slide.

single flavour tests I’m sure this version is a very long steeper.

Thanks for the picture. I think I got the non concentrated version.

i do too although u do have to steep that a week. The color says a lot, diluted in vg would make it lighter like that so u got vg flavor in sc bottle, give em a call, might help keep this off shelves before someone else has to ask the same question

Where did you order that from?

A British company. I won’t name them cause they’really generally good suppliers. Basically, I ordered 5× 10 ml of RF SC Sugar cookie and instead I got a 50ml bottle of PG. I think they gave me the sugar cookie VG version’s strength, which I have to use at 8% .

Hmm. Yeah. If you ordered the sc version vs vg and received the vg I would contact them.

All the SC concentrates go good at 2.5% as a single mix.

I think as worded, this is HIGHLY inaccurate.
As well as an unsafe practice (broad generalization where flavors are concerned).

I think I got the non concentrated version.

They do make some VG versions though, which are very different animals from the SC line (in strength AND frequently in profile).

If you have an accurate syringe you could weigh it. That would tell which version it is. If it’s the SC version I ml will be very close to 1 gram. The VG version will be 1.26 + IIRC.

Every time I mix with it my juice gets massively diluted which leads me to believe it’s not even PG but distilled water. Shit. I’ve emailed the vendor so they now know. Wasted the whole weekend remixing and dumping juice while developing a recipe.Realtor annoying

The SC versions do not contain PG. They contain a small amount of alcohol , I THINK some distilled water, and am not certain but believe PDO is also used. They are introducing a PG based version Feb 1st and are/have transitioned to a new website.

Since you are experiencing a lot of thinning, I think (speculate) that you have the SC version. Contacting them was best.

Cheers for the advice. Mistakes can easily happen when dealing with big orders so i’ll be sorted and at least they’ll be aware now

@Sprkslfly all the sc i have purchased have been rebottled similar as pictured above. In my experience 2.5% works well as a single mix. This maybe a local thing but this is my experience. This may not be the case for all flavors that are either a base flavor or an additive type flavor. This is why I asked if this was to be used as single flavor. Maybe also worded (11pm babying crying poorly). Just to clarify.

There’s a pretty healthy difference in some of the RF SC’s (percentage-wise), and you’ll run across it sooner or later.

I only tried maybe 20-25 of their flavors, and what I posted above was my experience.

I can see how it might appear as an easy assumption if someone stays in a fairly narrow group though. (eg: using only a few fruits)

I just wanted to (primarily) make sure that a new user didn’t get the wrong impression. As even while RF’s label typically says 1-2.5%, some need to be higher, and some lower to stay within a useful margin.

I suspect the label percentages are for use in cooking and baking. I’ve been all over percentage wise in my usages.

@Sprkslfly @mrpipes not sure if you have experienced flavour degradation. I live in a very hot climate. If a slow shipping method is used for said concentrates i find the flavour strength to be somewhat diminished when compared to a flavour that arrived quickly and stored immediately in my fridge. Has this happened to you?