Reap what you sew

What, Illinois THC lovers? You didn’t see this coming??

That is happening around the country, taxes so “high” people are going back to there illegal dealers. Leave it to the government to screw up once again.

Let the gooberment in and they will fuck it up. Law #1 of gooberment.

I imagine this happens often when a new drug dealer takes over a corner - people pay more because it is a better product.

I know we’re talking about pot here, but this is my main concern with flavor bans too. I could easily see people going to get their flavored nicotine vaping products from illegal distributors. That bothers me greatly.

I suppose this could be the impetus for the still-underground street dealers to increase their prices. Why let the government be the only ones to profit more?

And a question, as an uninitiated, not even a sideline spectator… how did the legal shops determine the cost? Did they base it off street value?

I wonder if it correlates to street value.

COLLINSVILLE, Ill. (KMOV.com) – Recreational marijuana buyers are lining sidewalks to buy in the Metro East and customers are experiencing sticker shock at the high taxes that come along with their purchase.

On the first day of legalization, Illinois sold $3.2 million in legal marijuana.

All cannabis infused products are taxed at 20%.

Where does that tax money go?

There’s more but you get the idea…

Recreational marijuana buyers are lining sidewalks to buy in the Metro East and customers are experiencing sticker shock at the high taxes that come along with their purchase. 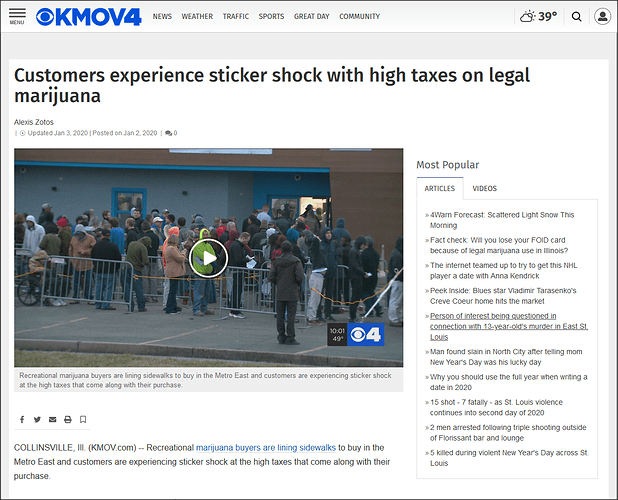 COLLINSVILLE, Ill. (KMOV.com) – Recreational marijuana buyers are lining sidewalks to buy in the Metro East and customers are experiencing sticker shock at the high taxes that come along with their purchase.

On the first day of legalization, Illinois sold $3.2 million in legal marijuana.

All cannabis infused products are taxed at 20%.

Where does that tax money go?

The state tax dollars will go toward things like public education, safety campaigns, law enforcement training, and fixing the roads.

In Collinsville, the city is charging a 3% sales tax. They expect to bring in million that will go to fixing roads.

“If you qualify as a medical patient in Illinois, it dramatically reduces the amount of taxes you pay to about 1%, maybe a little more with city tax, but it makes a significant difference,” Kathleen Olivastro with HCI Alternatives said.

A Chicago-based cannabis research firm believes Illinois will see $1.3 billion in salve over the next two years, rivaling Colorado.

Hey thanks for the extra screen shot showing all the crime in Baseball City!!!

The state tax dollars will go toward things like public education, safety campaigns, law enforcement training, and fixing the roads.

That’s what they said about the MSA money.

Since this is a DIY Forum, please let me point out that only a certified medical patient can legally grow their own. (Up to 5 plants)

Gee, I wonder if that was put in place to collect the most amount of tax $$ they can?

Those prices are just insane…

It’s all good in the government hood. (Pasting it all for @Josephine_van_Rijn) 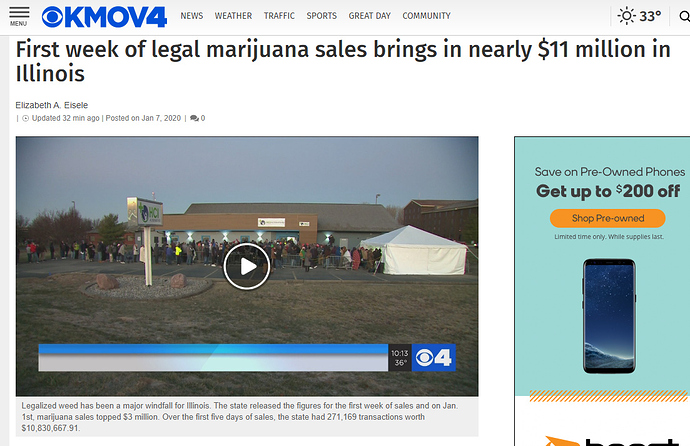 COLLINSVILLE, Ill. (KMOV.com) – Legalized weed has been a major windfall for Illinois.

The state released the figures for the first week of sales and on Jan. 1st, marijuana sales topped $3 million.

The state said 25% of cannabis sales tax revenue will go to the Restore, Reinvest and Renew program. It aims to address the impact of economic disinvestment, violence, and the historical overuse of the criminal justice system.

“The successful launch of this new industry is a historic development for our state that will benefit the very communities that have been disproportionately impacted by the failed war on drugs,” said Toi Hutchinson, Senior Advisor to the Governor for Cannabis Control.

The Illinois Department of Federal and Professional Regulation said they will award up to 75 new dispensary licenses. They’ve received 700 applicants looking for almost 4,000 licenses.

The new dispensary licenses will be announced by May 1.

As for dispensaries currently open, officials expect long lines like we’ve seen in Collinsville to last a few weeks.

Unfortunately, Chicago police are investigating its first break-in at a dispensary.

Officers responded to a burglary at a shop Monday morning. They said someone took off with cash only. No products were taken.

The store had been dealing with a shortage of supplies due to demand and was only selling to medical patients.

Well, the nice thing is, it’s legal.
And yes. The government and it’s greedy bastards can screw up anything if given the chance to prey on the less fortunate.
Here’s a silver lining though; I don’t live there. Haha I kid!
No, the silver lining is that I can only assume that possession is legal, and since it is a plant that can be extracted and utilized in its many forms, that means that people won’t be going to jail for “rollin’ dirty”. So that’s good.
Now folks can enjoy their meds without fear of being arrested, no matter where they get them from.
It’s when they start dying the shit purple and arresting anyone caught carrying green weed that we got troubles.