Recipes not showing, i have the ingredients

I have all the ingredients for Pebbles and Rhondonite and have made both, but when i click on the what can i make tab neither of these show up in the list?
Anyone know why?

Most likely because you didn’t input you flavors into your stash using the right format. You gotta make sure to pick the right flavor concentrate.

No i added all the manufacturers info aswell as the flavour.

my stash list is quite long and i do get quite a lot of what i can makes but not them 2 so I’m wondering if I’m missing out on anything really tasty.

Did you sub any of the flavours?

no i got all the originals

Yes, that could very well be it!

well it tastes awesome after a 2-3 week steep so if makes any difference its not a bad one.

You should double check. Go to the recipes directly. Then click on the ? The red arrow. It should tell you which ingredients you don’t have. See my example, I basically only have 1 flavour. Then you can isolate which flavour you are not matching with. 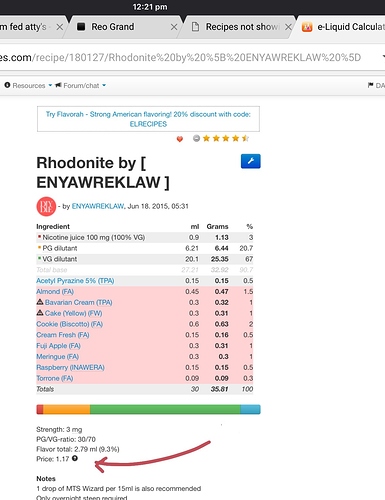 I’m learning something new every day, lol, I didn’t know about that one

well I’m showing everything in red but i know i have some of the ingredients?
Yours is showing you have Acetyl Pyrazine am i right?
Edit, I’ve just clicked on a flavour in the recipe and it shows as (you have this flavour) but it shows red in the list?

Make sure to enter the DX and version 2’s as well.

I believe you have to enter the cost as well.

Yours is showing you have Acetyl Pyrazine am i right?

Can I recommend you add your flavours through the recipe then. So click each flavour in the recipe and add to stash from there. You may want to delete your old ones after. It seems you do not have the exact matching flavours. Because the DB is open there are like 100 different options for popular flavours.

I know daath is working on a way to clean this up.

Just make sure in future when adding flavours you choose the one that is used in lots of recipes.

That function doesn’t work for me either and I have everything entered in correctly.

looks like il have to re-add them all then lol

rather you than me

They all come up red but when I click on them it say I have that flavour.