Looking for a pairing for cap sweet tangerine, looking for a predominately tangerine mix not Orange. The following recipe has potential but tastes a bit washed out feel it needs to be fuller not necessarily stronger. Any ideas was thinking Cap Orange 2-3% (never tried it) and possible drop the pear.

Main ingredient:
DATE, ELDERBERRY, GUAVA, KIWI, PEAR, PRUNE, PUMPKIN, RASPBERRY.
will all go well with Tangerine as the secondary flavor.
so you might want to try it without the peach

Excellent thank you, already got pear in there thought peach would be a good secondary flavour. The tangerine does seem to be missing something definately needs to be a bit more full on.

Yeah you could be right maybe remove the peach

You may need another orange. Like orange cream tpa or ecto cooler FW.

Orange is a tough one. The aroma/vape of oranges tend to be flat and one way. I tried for a long time to just use fa’s and tpa orange cream. Still a bear.

low percentage ecto cooler, bit of stevia and a few drops of saline in with the tangerine, reckon you’ll be golden, maybe drop your cream a tad too, add a bit of champagne for a colder bite, tiny bit of koolada on top of that if you want a fizzy cold feel

There was someone 3-4 months ago that suggested a replacement ecto cooler…was that you? If so, which orange is it?

I wish I bookmarked it at the time or took a screen shot.

erm…no I don’t think it was me, I did an orange with ecto in it?

I mainly use Tangerine in strong citric mixes. But had some success mixing it with Cranberry (FLV) If happy with the initial pairing, You can then try adding to it with small amounts of a decent cherry concentrate and a drop or 2 of (FLV) Rich Cinnamon as you want these as background flavours, not to the front.

It is something I haven’t mixed with, but typing this out has made me think a decent pomegranate flavour could also possibly go well with tangerine and produce a decent balanced finished flavour?

Cheers, like the flavour definitely flat as you describe, think this will annoy me too.

Thank you Pugs, will definitely give this a try, no saline though will have to invest in some.

Hi thanks for the feedback, some good ideas there, I would normally steer clear of cherry but might make a nice change.

Winkie face smiley face. If you wanted to see a close starting point I do have my orange recpie posted somewhere on VU. It didn’t get any love. Lol. But it could give you an idea of where I was at 6-8 months ago. My user name is the same over there.

Ill have a look Chris thank you.

The TFA pear will supply the sweetness, the marshmallow takes away from the citrus with vanilla hints. The change in cream bring up the sweetness a little as well. The Bergamot gives you something a little more astringent like grapefruit and luxurious. These would be my recommendations

Looking for a citrus flavor the screams luxury? With a little more bitterness than grapefruit and a little more sourness that lemon, Bergamont is the way to go!

Here is a pic of my orange vapes mixed on 10/15. The two on the right need about another 1-2 weeks. Then the “orange” steep color will deepen just alittle bit more and they will be ready.

So my word of advice is to age orange vapes. Many outside of strawberry vapes say fruit vapes are ready as snv or 2-7 days. Orange for me is at least 4 weeks. 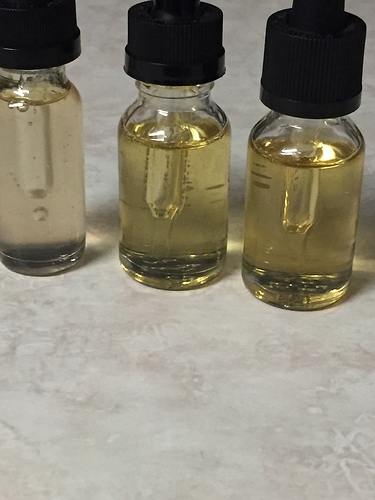 Will give that a go, thanks for the tips. Just needed to narrow down the options a bit so I didn’t have to invest in too many new flavours at the moment.