I’ve already posted a request for advice on how to combine my current ingredients to come up with an anlternative to this mix. Here:

Greetings all new to mixing here, aside from interest in my own mixes for which i haven’t found any oneshot or shakenvape producer, i also wanted to avoid anything iffy (DAAPs, oils, sugars, etc) in my juice… my favourite ADV (not many at all, i’m afriad) is called WHite King by a german mixer called Dampflion. haven’t had luck finding a clone on german sites (not with my german anyway). it is described as trans. ‘a fresh and lightly sweet mix of cactus, mandarin and grapes’ aside from rumor…

@Rocky02852 suggested I post another in clone requests and found the image, so here goes, though my impression this is an unknown mixer in Anglophonias but here’s hoping someone’s come across it oder dass wir eine/n Deutsche/n hier haben.

I should note that the point for me is not so much the desire to make this myself (though that is fun), as at 9euro per 10-12% dose isn’t bad all things considered. Rather, it is wanting to avoid the iffy ingredients it includes (lonalool, citral and [per rumors] sucralose). 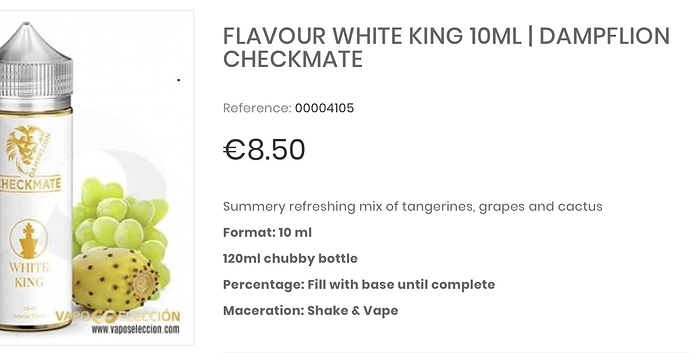 I already scanned the German web for nearly an hour after reading your other post.
It seems to be quite a popular ejuice.
The closest I found was a tasting review on a clone RDA​:joy:

I found another actual thread on a popular site, the Dampfer-board:

I would check this from time to time, someone mentioned the same desire there to clone white king without sucralose.

Maybe you want to post your clone request there. I am sure our friend google translate can help you.

First, let me say it’s almost impossible to do a virtual clone of manufactured juice. To get close, I watch youtube reviews of the liquid in question, then I look at places that sell that juice, and base what ingredients to try based off those reviews if I’ve never had the juice to make something that might work close to what the creator tried. Sometimes it works great and I like it LOL

And here your label to print, if you’re successful: 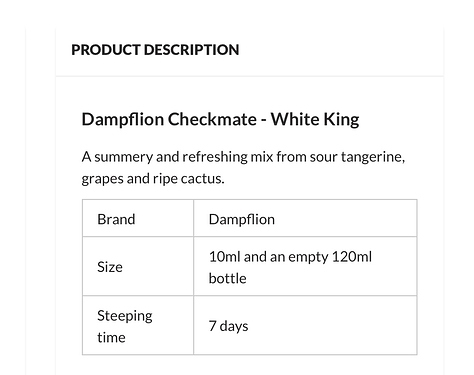 image917×724 60.7 KB
Not sure what flavors you have in your stash and never tasted the OG juice. I came up with this:

good idea_ practice my vaping-german too! i did find quite a few reviews when i was looking for a cloning clip

thank you! haven’t come across this forum. will give it a go. Black Queen is also one of my favourites, but i think it has mint oil was the problem. great.
it is a well known here yes. my favourite all day vapes are from him/them, the other is Black Lion, which is a bit similar to the one i;m trying to make in being seemingly high with cactus and fresh but has eucalyptus and ginger and no mandarine or grape i think. but it also has something iffy, tract_something whatwasitcalled… maybe also undisclosed sucralose…
as to the sticker, lol, i’m still at the blackmarker-scratch-to-relabel stage…

@Rocky02852 thank you very much for giving it a try. this is your take from what you’ve read?.. i imagined much more cactus_ the german descriptions starts with it ‘a fresh and lightly sweet mix of cactus, mandarin and grapes’ i haven’t tried my mixes yet (wary of not steeping after a blacktea after-3days fiiasco… here’s the mixes i;ve done

[before i got mandarine, lavender killed it::]

i just recently got what i thought were my necessities as a beginner, so it’s like 20 flavours i have allinall… of these i lack Koolada (of any kind_ only mint-types i got are the one you’ve suggested and INW Mix Mint) and Sour (hadn’t come across it in my research and i’ve generally avoided TPA, i think i read something in my ‘safety’ research…)

It looks like your on the right track, I thought there may be more cactus but don’t go high with that myself for MY taste. Note that it’s better to start low on your flavorings and work up. I think I would use a Tangerine in place of Mandarin but never had the OG juice that’s just my thoughts. As far as Mixed Mint you may be able to go up to .1% or more it’s a matter of taste, it’s too strong for me. Don’t worry about sweetener until you get the flavor that you like down first. Then maybe Sweetness FLAVORAH. As far as Sour, I like to use in citrus type mixes, if it’s bad for you don’t use it or maybe another brand may fit your needs.

thanks a bunch. I have tried the Mix Mint in my doomed first tea_ took over even with FA Black Tea and Lavender in there!
Been on the search for liquid stevia here by way of sweetner, otherwise i’d think the cactus should be sweet enough in and of itself. Tangerine? hmm… We shall see
it’s actually not very citrusy at all, just something worked into the flavour (almost forgotten it had mandarin even_ let alone noticed that it had citral, only read that when i started exploring potentially harmful contents)_ i’ve mostly found predominantly citrus liquids too harsh for me (sadly also anything baked, jammy, candy, liquer-y, and many overly fruity ones too… more flexible in my MTL setups though where i go for the harsher stuff more and more as i lower the nic)

i’ve mostly found predominantly citrus liquids too harsh for me

That’s where the sour WILL help IMO, (read my notes in the data base) as for myself, I like the citrus throat hit. Everyone’s taste is different!

oh right_ occurred to me that might be the point of it. thank you most kindly.
citrus hit works like a dream MTLing for me_ but DLing i like to keep it to a minimum. Got a Lemon Tart Dinner Lady a few months ago, felt like i’d lacerated my throad, then i discovered it’s potential with MTL attys, went from 20 to 10 mg’s without losing anything it seems.

That is a shame, Rocky…
I love the cool menthol and ice combo… refreshing and happy with a lot of things

I always keep some on hand.

Ok, I’m DTL myself so everyone is different! One thing I would say is that cactus can overwhelm a recipe, but I’ve never liked a Cactus top note myself, but it’s all about what YOU like, hopefully someone else with more experience with these flavors will chime in👌

Yeah I think that would work for @virm here, but you know ALOT more than me on that.
BTW bull city notified me that cool menthol is back in stock but limited quantities!

I would think a quad pack of

As for the juice itself, haven’t vaped it… or heard about it…

What I would do is run solos on the flavors and compare it to the og as to how much of what is in it.

There might be other flavors too, but again, if you do not know the juice, kind of hard to know which direction to go in…

that’s a lot of layering! if that’s just for the fresh note i can only imagine how sophisticated the other, more prominant, notes should be… my poor little stash ain’t no where near up to par

There are different brands for sour and the flavor supports quite nicely the tartness in grape with one of its ingredients.

I made a grape and starfruit mix which went only out nice after I added sour.

I also only mix with Flavorah…

being I have never tried your juice…

I’d let it sit for a day or so, and see how it turns out…

@SteveTC that does sound useful. and interesting mix indeed, quite within my world.

@anon84779643 that’s an impressive improv on something you haven’t tried. thinks it’s the first time i’m really computing biulding the flavour works. curious as to why you haven’t even nominally added the cactus, though… you’re making me seriously regret not having shopped after doing this to figure out the recipe(s) back when chefs still had the sale. very tempting concoction.