Show us your computer's

If more and more software vendors use cloud solutions Windows won’t be necessary anymore when everything runs in a browser.

I agree to a point… but I still think that for video rendering, especially FHD or QHD+, still needs to be done on a standalone PC. Yes, it possibly could be done in the cloud, but the amount of bandwidth and end user internet speed that would require would be somewhat prohibitive.

Gaming, yes that seems to be more cloud based now, even some graphics programs have gone that way too, but I don’t know any video guys who use anything other than their own rigs to do post production processing, editing and rendering.

So from that respect, I think there will still be a need for Window based PC’s for quite a while yet.

Yes but there you can draw a line between professional use and hobby use.
If you can’t live without it you’ll need a dedicated machine for that and that’s fine. I’ll keep a windows machine for this reason but I’ll certainly keep it separated from the rest of the network. Setting up vlans to separate traffic can now be done with consumer grade switches these days, not only expensive layer 3 switches.

My Sons that he and I built, 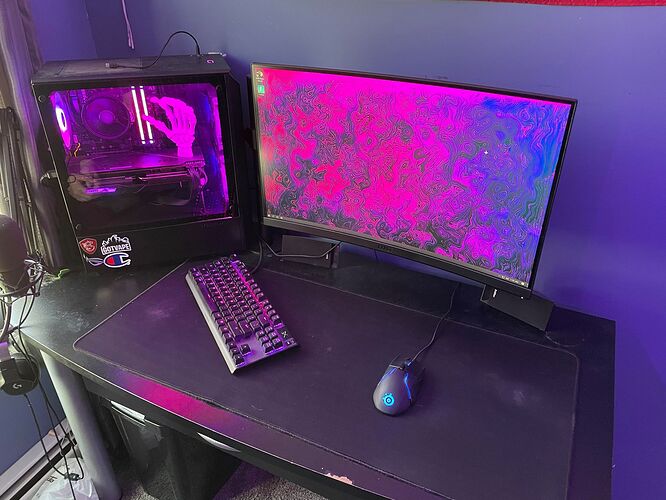 This post was flagged by the community and is temporarily hidden.

I mean, you have to pay and see his content, I stopped after he started eating the whip cream off his toes

Probably, I gave up years ago. Too much of a headache!
I remember starting with Windows 95 in the computer workshop. Trying to find a driver for the things.
It was a nightmare

A lot of swearing going on in that place

It was fun though.
Slapping in a cd and have the driver automatically installed was easy, but…

I have lost my interest in computers over the years. I just use the thing now.
Don’t want to spend time tinkering around anymore.

I could, I have a second hand Mac Pro that I could Build Back Better.
Maybe sometime

I’m with you. The older I get, the less screwing around I want to do with computers. Early on, it was new & interesting, getting into the nitty gritty of it.

Always been a Mac fan. Veered off course for a couple of years, needing a Win machine (XP) to run some work related flight tracking software. Got sick of the constant updates, patches, virus protection, malware scrubbings. When I was able to, I went back to the Mac. I just want something that works, at this point.

Still running my 2012 Mac Mini, and couldn’t be happier. Never once needed any tech support or repairs. It just keeps going. I did max out the ram, and upgraded to a SSD drive, about a year ago, and it’s running better than it ever has.

Retired now, so don’t need an IT dept dictating what I need. Just need something that works, for me. Don’t need to know how to forge a hammer, to use one.

Yes, I prefer linux for the look, customization or variety of appearance but all the old distros I had used In the past were too high maintenance… Fedora seems to be good though, packages are kept up to date and seems to work out of box

If, for some reason, I had to ‘re-tool’ and the Mac OS was no longer a valid option, I would go the Linux route. I’ve only had very limited experience with it.

The two laptops that I switched over to Linux were old Dells that had reached the end of their useful life. They could sit on a shelf and collect dust, but I figured what the hell, and tossed a free Linux OS on them and played around with them a bit. An experiment that didn’t cost anything.

I don’t even remember what builds are on them, but I did like the potential that I saw.

Well, it’s really good these days, not 100% but pretty good. If you like gaming people are more available to port things over but there isn’t a market for most companies to put into coding native versions of games but there’s a handful. Warhammer Total War series run Natively, don’t play them but a lot of linux nerds really enjoy that series. I just prefer Linux all in all, my computer is 6 years old and everything runs fast, if I need to read Windows stuff I can, if I need to write documents, spreadsheets, etc it’s all compatible. An old user here, SthrnMixer switched over to Linux for his Business and I don’t really talk to the guy anymore the last I heard was he was able to run most of the stuff for his work in Linux with no issue. So that’s pretty cool.

upgraded to a SSD drive

Might look into that sometime. I’ve got the late 2012 mini.
No complaints, but it could be a little faster.

Fedora seems to be good

I’ll keep that in mind, if I ever want to try again.

Haven’t done any gaming in eons. Does Asteroids count?

For S&G’s I dragged out one of my Linux sleds. It’s a Dell Mini 10V. It’s actually a cool little netbook. The problem is it’s an Atom processor with 2G of ram. Due to those limitations, I was pretty much forced to use a bare bones Linux build. It’s running Ubuntu 3.28.1 (2016).

Lol, it’s slow as hell, battery is pretty much shot so I need to run it on the charger, but the little sucker is up and crawling along. Wifi works and was able to fire up Firefox.

I’m a bit surprised the thing still works. It’s been a few years since I last messed with it.

Yeah, that’s pretty down there for ram, but you could get a simple Window Manager like LDXE or something similar, really simple but should work fast enough for browsing the web and whatnot

I have been playing over the last few weeks and have upgraded my PC. Details to follow.

Also, bought two laptops that are an upgrade on the ones I had. A Dell Inspiron 16 and a Dell XPS 13. Both are a little older but have CPU’s that run Win 11 without an issue. The Inspiron 16 has a 6 core i7 which obliterates the 4 core i5 I had in the last Dell.

I haven’t got it yet, but bought a Dell XPS 17, i9 on a sweet Black Friday deal. My current laptop is on its last legs (9 years old). It should be here in a couple of weeks.