One more question before I go mix myself a nice custard…

I see a lot of people saying they prefer single coils over two and want peoples opinions about why they prefer that?

I ask, because most my RDA decks are made for dual coils, which doesn’t by any stretch mean I must install both - it’s just as easy to only install one - but I always do anyway just out of habit, I guess.

Are there actually flavour benefits to be gained with a single I’m unaware of, or do y’all just co-op with singles for battery life or other pragmatic reasons?

for me, it’s for the battery life. i’m almost always on call, so never now when i could charge my batteries again.
besides, the design of single coil atomizers (i used mainly rta) is already great, giving great flavours almost like the flavour from a good rda

I’m changing anyway for the new custard mix testing, so have tossed the dual ni80’s I had in it and replaced with a single 26ga SS coil; spaced, 0.68 ohm and flash heated to rainbow colours to clean off my finger oils and whatever new-metal-nasties might be on it… 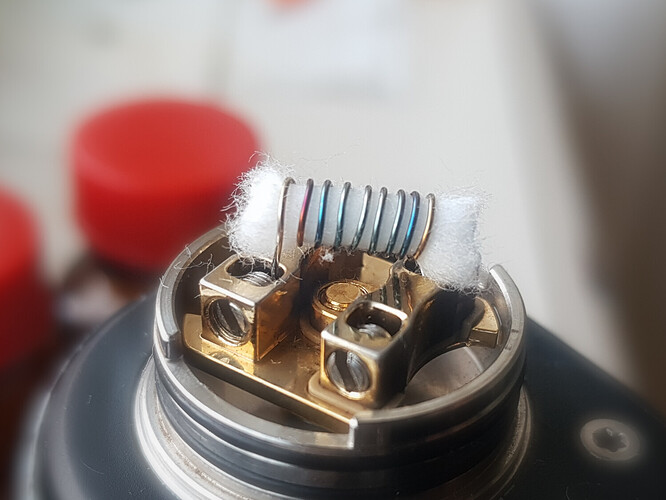 Yeah whatever those flavours were from vapeking, they were garbage compared to these: just the difference in strength - it’s like trying to compare freshly blended tropical fruit juice to water you drained out a car radiator.

Talking like, “5 drops is too strong” kinda strength flavourings… goodness.

Smeared a tiny bit of pudding base on the back of my hand then licked it: half an hour later all I can taste in my mouth is that pudding base kinda strong.

Finally, tea washed it away but I am anything but complaining: it’s excellent to finally have done flavours that potent.

For me, it’s simply that I don’t enjoy an airy draw, especially not a hot one, and single coil rda’s and rta’s tend to give a more restricted draw. The battery life is a bonus

The hell did you come from?

Who are you! … hi and welcome checks welcome back I should say

For me, it’s simply that I don’t enjoy an airy draw, especially not a hot one, and single coil rda’s and rta’s tend to give a more restricted draw. The battery life is a bonus

So I’m not missing anything judging by the responses of you and the other two.

And I still am unsure which draw I’d rather, but know I dislike either extreme: too airy - to the point there’s NO resistance going on - sucks, but so tight I’ve gotta suck until my eyeballs feel like they’re going to pop back inside my head - that’s not ah, optimal either

Hard to find a goldilocks zone good enough to stay with, I find.

That a MTL tank?

One of the few hardware needs I still have to fulfill before the October deadline: a new MTL tank that’s rebuildable (since I generally use RDAs exclusively now and have no intention of buying any tank that requires proprietary, pre-made shitty slot-in coils at this point) and a genuinely awesome one since I may not be able to order another one after Oct.

And a dual battery mod that’s well, that doesn’t need to be as awesome as the MTL tank - just have a design and hand-feel I like.

Have a look at the Aromamizer Lite 1.5 for MTL. I think someone posted about them being discounted a while ago. Makes a superb RDL tank in direct lung configuration and comes with all you need for MTL as well.

Yeah I’ve never actually owned a rebuildable MTL - only the standard sub-ohm DL tanks and though I actually rebuild the massive Smok TF16 with normal round wire that heavily ‘tamed’ The Beast effectively enough so it operates @ only 18W and works as a MTL with the airflow restricted until it’s nearly closed, that’s still not a tank designed to be an RBA MTL.

A good purpose-build rebuildable MTL has gotta happen least of all so I’ve got a good tank for salt nic mixes.

Like you most my RDA’s and RTAs are dual coil, I started with a smok RBA which absolutely must be built with two coils or it leaks like, well something that leaks a lot so I’ve just always built that way for tanks. Drippers I’ve not really bothered with dual coils on for a while, simply because I do change the cotton a lot more as I use them for flavour testing above all.

Recently though I got the Dead Rabbit RTA and I’ve pretty much been building it the same way as the RDA, and if I’m honest, apart from a little less of a cloud, I’m really not noticing much difference in the flavour department (or, more to the point, the nic hit is the same). I got tired of replacing the RBA for the Smok Prince tank, and even though I do like the 8.5mils it can hold, I think simply due to not being able to single coil it, it will now be getting retired.

Eh, swings and roundabouts I reckon. Give it time I might swing the other way again.

It’s like, everyone’s got that tank and we all loved it back im the day.

Then beast-sized clouds got to be less and less a thing, then R.I.P, TF16

I know nada about that tank but there’s sure a lot of posting going in about it recently with only praise for everything about it.

That can go on my wish list just because of the amount of love it gets around here.

I see a lot of people saying they prefer single coils over two and want peoples opinions about why they prefer that?

For me it’s singles, a few simple reasons… Ease of build, economical maintenance (half that of a dual setup), and I vape at lower level that don’t really benefit from a dual setup.

I’ve been using this one for quite a while now. Too easy to build, good flavor, no leaking, gets pretty tight and also pretty loose airflow-wise, and I’ve always liked Hellvape. I’ve seen it mentioned here before, I believe by the great @Lostmarbles . Only drawback I’ve yet to find is it can be a bit loud when opened up, whistley. I don’t like loud attys. It is silent where I vape it at though, which is a slightly restricted DL.

Makes you wonder why manufacturers continue to design new ones when there’s so many options - many of which work every bit as smoothly as the competition.

Not for very long, of course.

I’ve been vaping nearly 6 years, and I can count on one hand the attys I’ve used on a regular basis. Yes I’ve bought a decent amount of different ones, but the vast majority have ended up in the drawer of shame. I’ve PIF’ed 90% of the gear I’ve bought. I fell for the shinyitis. They got my money. No regrets!!! Heck, I have two mods that I use and always use exclusively, yet I still went for that yellow thing I saw here on Good Deals yesterday. Who knows how much I’ll use it.

You know, I shelved my 1.5 for quite awhile and tried again a couple of weeks ago and I don’t know why I shelved it. There’s nothing to dislike except for that loose as shit airflow ring, but even then, you have to forgive it because the flavor and texture of the vape is so good.