Hello once again ELR and thank you for taking the time to read my review of the Smoant Battlestar RTA that was sent directly from Smoant for the purpose of this review.

If you want to find out really quick my overall conclusion you can scroll down to the Pros and Cons section and Conclusion to save you some time.

What’s in the box It is a little plain looking but the laser etching on the chimney is understated so not in your face like I like it. Build quality is pretty nice and love that they used a stainless steel threading inside the delrin drip tip which makes opening and closing a cinch.

Wasn’t too excited by the slot grub screws, for me they are hit or miss if I will like them. Threading is pretty smooth but you have to be careful when reinstalling the chimney back on the deck. AFC is nice and smooth and has stopper at full open and close.

Didn’t have machine oil smell but I still took it apart to give it a rinse with a little dishwashing soap but didn’t feel the ultrasonic was needed. Love that the top of the chimney it not flat, it is cone shaped which helps with flavor and it sure does work. I ran 3 different builds through the Battlestar RTA, dual Triple core parallel fused claptons SS316L 30Gx3/38G, the same but with 28Gx3/36G, both from Advanced Vape Supply and a simple 26g single strand SS316L from Temco.

Since it is not a huge build deck I used a 2.5mm post for all 3 builds. With that size I figured it would also give me enough cotton for wicking.

All the builds worked well but my favorite by far was the Triple core parallel fused claptons SS316L 30Gx3/38G, you can buy it here if interested: Advanced Vape Supply I generally like my builds to be about even with the top of the velocity posts. I find that the closer my coils get to the top of the chimney the flavor is a little better and with this setup it worked just right. It can get a little spity depending on your watts or temp but dialed in it is a tasty vape for sure.

Wicking is a little tricky on this one, I got it right with my first and 3rd build but the 2nd I had to redo as it was a little too tight so flavor suffered. If you get it too loose you will get leaking as well. I found if I cut my wicks at a V on the bottom after fluffing them out it really helped. You want the thick part to be flush with the deck and the V will protrude down, almost touching the bottom. First off I wanted to mention that I was able to get 4ml to the very top with a syringe. Probably not the best idea though as a couple times I got a little leaking when closing the top cap as the extra juice needed someplace to go.

You’re not going to winning any cloud competitions with the this RTA since it has a smaller chamber and slightly restricted airflow. That is not what this tank is about though, it is more of a flavor tank but the clouds are nice and dense.

Flavor is on point though, damn do I love the flavor I get with the Battlestar RTA with the right build. Flavor was good with the single strand 26g dual coil build and better with the triple core parallel clapton 28g core but when I put in the Triple core parallel fused claptons SS316L 30Gx3/38G wow, the flavor really pops big time. We are talking RDA good flavor here, I have been extremely impressed.

I have to admit though, with the single strand 26g build I felt the flavor was pedestrian, not bad but run of the mill. With the right build and wicking though this tank has quickly become a favorite of mine for flavor but it is not going to be forgiving of a lesser build.

This tank really does burn through juice with some builds, I actually checked for leaks a few times because I couldn’t believe it was empty already. At least your are rewarded with excellent flavor for the guzzling of juice.

I had gone through 2 builds using the included slotted grub screws but on the 3rd build the little screwdriver they included gave out just as I was unscrewing the last one. I was able to get it out but then decided to replace them with standard grub screws I bought from fasttech: Replacement Screws for Atomizers (10-Pack)
M2.5*3mm thread size

The included screws were still in good shape, just the screwdriver they included gave out and twisted up pretty good.

I have been using the Battlestar RTA for a little over 2 weeks now on a daily basis. Even though it does have it’s cons, the biggest for me is not being able to use your own drip tip I still love this RTA.

If your into only high powered cloud chucking tanks like the TFV12 then this tank is probably not for you. I love my TFV12 but this RTA is a different animal and more geared for flavor, in that respect I love it more than the TFV12.

I will admit the black Battlestar RTA is too plain looking for me. Flavor though has me hooked so I will be buying a Copper version to go with my Copper Battlestar mod. That is the highest recommendation I can make is that I am going to spend my own money to buy another one so I can get all matching with my mod. I know I am going to use the hell out of it so easy decision to make.

This is an easy tank to recommend for flavor chasers like me. It is going to be in my regular rotation of tanks and used to compare to other tanks in the future.

Thank you to Smoant for sending me this excellent tank, I really had a fun time reviewing it and will continue to enjoy it for a long time.

As I was writing this review I was on a desperate search to find the copper version to match my copper battlestar. I found it here for $24.99 but they still have the coupon code 20Off which made it $19.99 and it ships out of the US. I wound up ordering 2, 1 for me and the other for a friends birthday. You can find it here: Smoant Battlestar RTA

Pics of the Smoant Battlestar RTA on various mods: PN0b7lI.jpg2988×3984
Smoant Copper Battlestar, soon to be equipped with the copper RTA! Thanks man, I appreciate it.

Now I can’t wait for my Copper one to get here!

Awesome! Thanks so much! I wish it had a single coil option.

You should really edit your pics and make them a lot smaller in size. That way everything would load a lot faster and you optimize everything. Make them around 800px on the longest side instead of the 3984px that you have now.

Not everyone is sitting on lightning fast internet you know. Just a friendly tip from me.

Yeah, a single coil block would have been a nice addition.

Thank you for taking the time to read my review, much appreciated.

You know I never really thought about that but will look into it, pretty sure I can make the adjustments on imgur. Thanks for the tip

Awesome review @mjag, very thorough especially with the different builds and what differences ýou encountered. I like an airy tank so prob not for me but I enjoyed your review thanks for doing it

Thanks Steampugs, really appreciate that and enjoy your reviews as well.

The airflow is similar to the iJoy EXO RTA but not as airy as my Aromamizer Plus which I run full open and love. I generally go for the more airy tanks as well but have some excellent tanks that are slightly restricted.

Cheers mate thanks for the time and effort - great review.

Thank you woftam, I appreciate it

I like that you pointed out that you can’t use your own drip tip. I wonder why companies are still doing this. To me that is a major con.

Yeah, that was my same con with the Vaptio Turbo RDTA as well, just use either a 510 or better yet 810 compatible drip tip. Luckily the whole top cap is delrin so no bacon lips on the battlestar RTA but still, let us use our own drip tips.

I have one on the way for the wifey!

She is going to love it

Sounds right up my alley, I just ordered 1 myself (the copper 1 as well to match my battlestar mod)

I just got the Digital Camo Battlestar the other day, looks nice with the copper RTA for sure! You’re gonna love it! I bought it largely due to this review and I’m very glad I did. Thanx again for the great review. I’m really liking this thing. 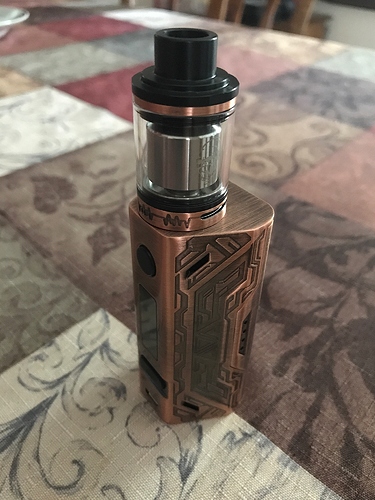