SMOK were kind enough to send me these for review.

So what are they? Remember a few years ago when eGo’s were all the rage? SMOK’s new offerings brought me back to that time (they are in fact eGo batteries!). In a way. Back then it was MTL (mouth-to-lung), but these new devices do DTL (direct-to-lung) fairly well!

There are no settings, no screen. Just a button. As they somewhat comically write, “Stick One - The Simple. The Enough.”. I was a bit surprised that it was actually kind of true. If you’re not all into tweaking pre-heat wattage and duration, temperature facor of resistances, uploading new settings to your device, but feel like filling your tank and vaping, this might be for you! I usually like to geek out and tweak my settings, but sometimes I like to pick up my device and vape, and not worry about anything, other than running out of juice. 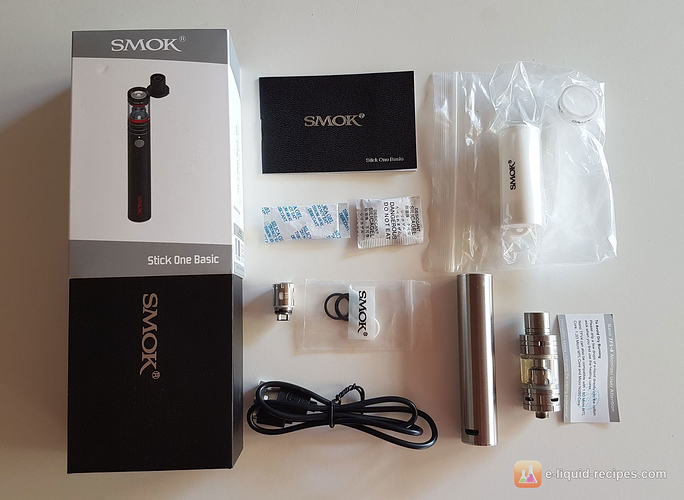 The Stick One Basic is a bit bigger than the old eGo’s and is made to fit the TFV4 Nano tank perfectly. The kit tank comes with a Micro Fused Clapton Dual Core 0.3ohm coil pre-installed. I let that sit in there and filled it. You get a spare 0.25ohm micro stainless steel dual core coil head with it. 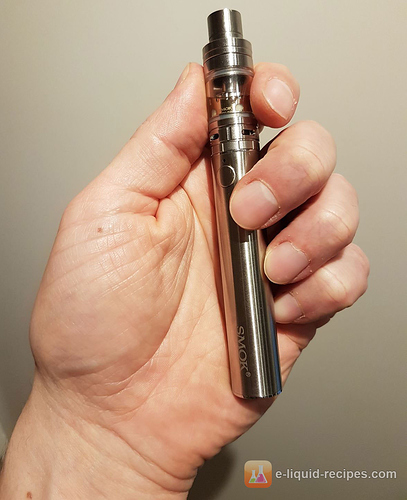 The aesthetics are nice - it can’t get simpler than this. 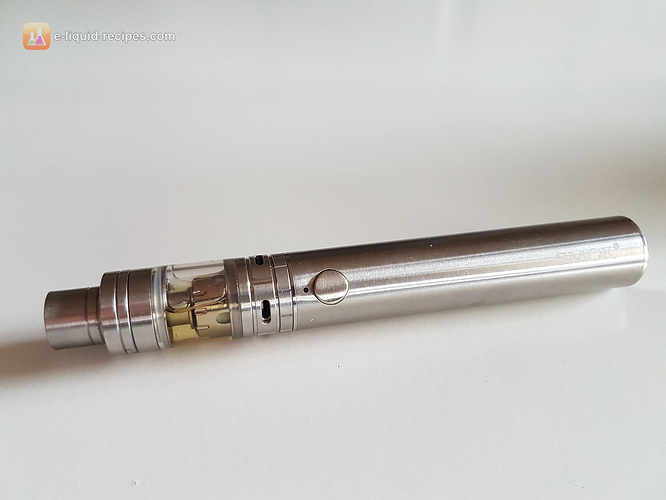 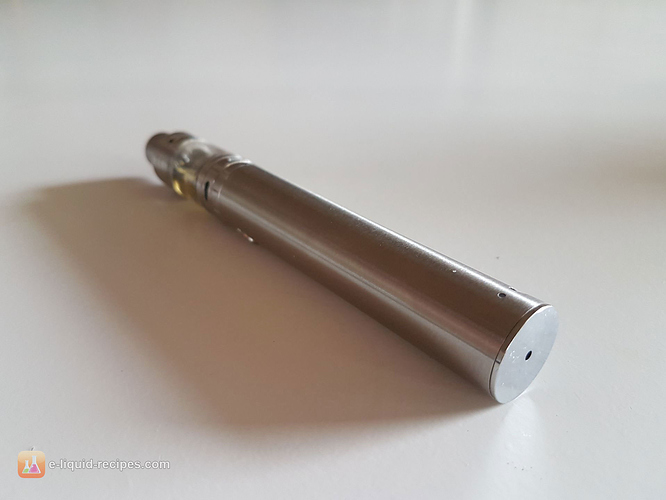 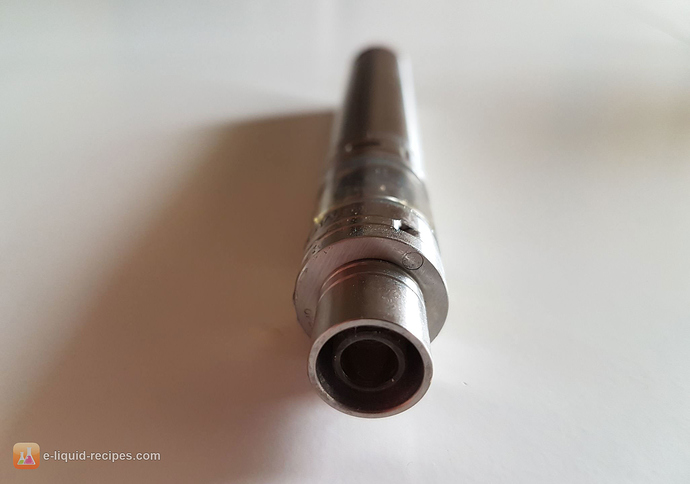 The tank itself behaves like a TFV4 - good flavor and good vapor. I was surprised to do direct to lung hits and get a decent amount of vapor. Not surprisingly, given the 2ml capacity, you need to fill it pretty frequently

I feel like the mouth-to-lung coils would be best here, since you need to fill it less frequently

It comes with a silicone dust cover designed to be on a lanyard. Personally I wouldn’t attach it to one, as I wouldn’t want it hanging from my neck

The cover is nice though and prevents any leaking and most importantly pocket lint, dust and sand in your mouth piece.

How’s the battery life? It’s good. It’s rated at 2200 mAh, and even though I didn’t use the device exclusively, I used it a lot when I tested it. It easily got me through a day, but I did have to fill the tank a bunch of times. You can actually feel the power begin to diminish. Each time you take a drag, the battery indicator blinks four times. When power is low (<3.5v), it blinks faster, and you should charge it. 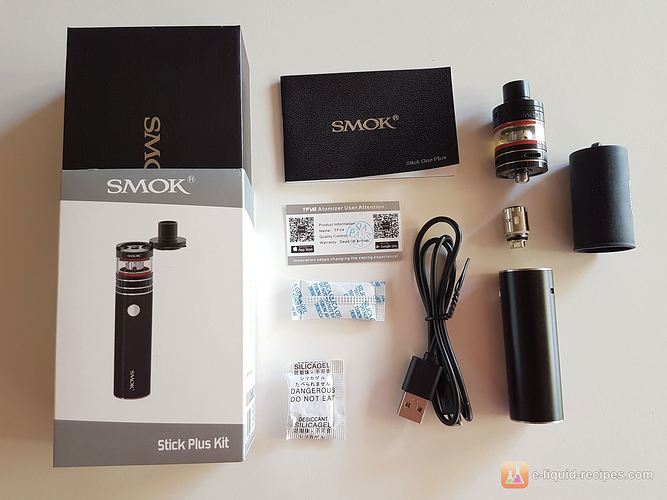 The Stick Plus is a bit shorter and fatter than the Stick Basic, at 24.4mm, and is made to fit the TFV4 Micro tank perfectly. This kit tank also comes with a Micro Fused Clapton Dual Core 0.3ohm coil pre-installed, but you also get a 0.25ohm micro stainless steel dual core coil head. I let the clapton one sit in there and filled it. 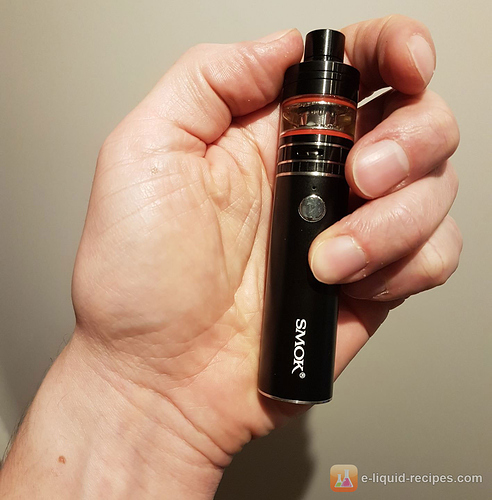 It looks rather cool, and it almost disappears in my rather big hands. 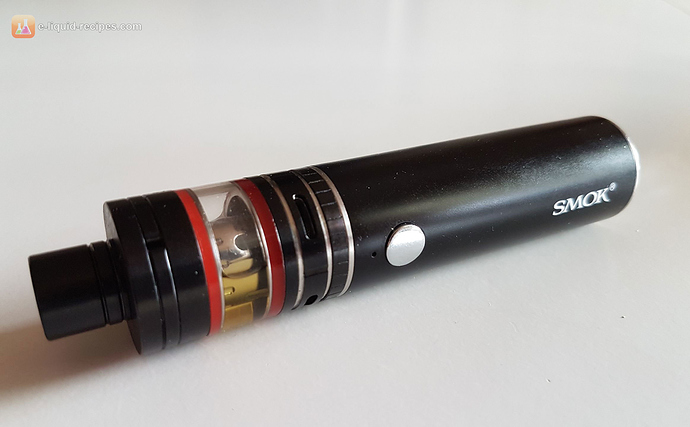 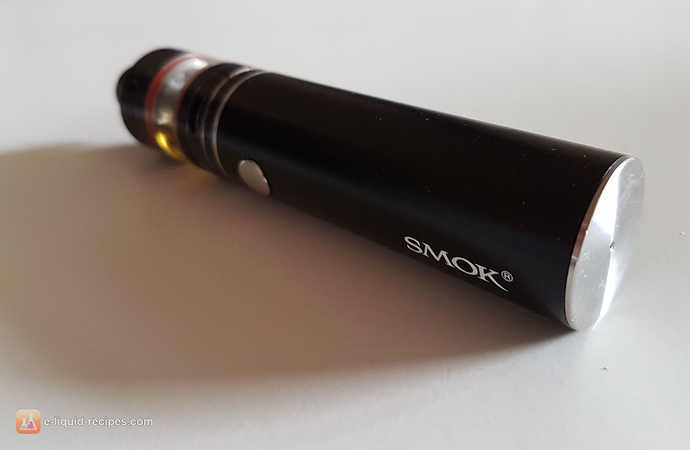 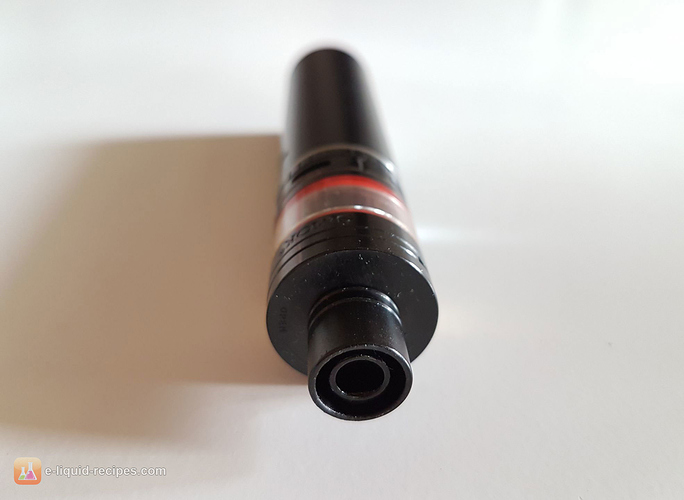 Once again the TFV4 micro behaves just like a smaller TFV4. Top fill is great and the taste is actually good, even with the pre-built coils. At 3.5ml you fill it less frequently than the smaller Nano, which is nice

This also comes with a silicone dust cover designed to be on a lanyard.

The battery on the PLUS is rated at 2000 mAh and, just like the Basic, got me through a full day. Battery indicator is the same as on the Basic: You take a drag, the battery indicator blinks four times. When power is low (<3.5v), it blinks faster, and you should charge it. 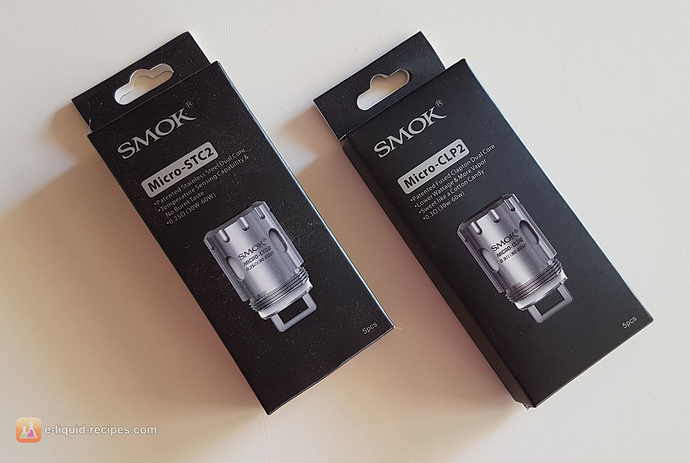 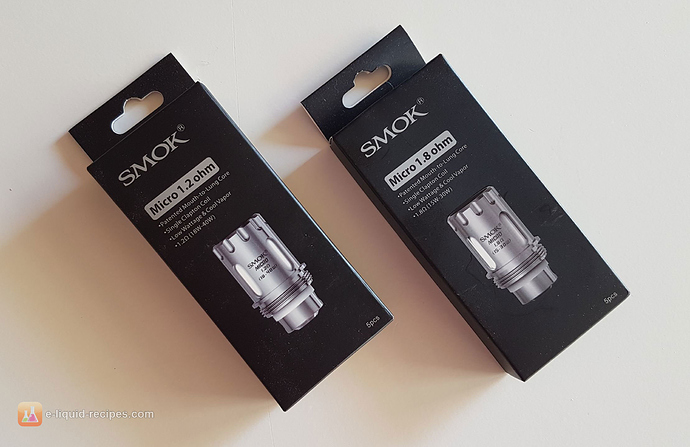 For the TFV4 nano and micro you can also get the TF Micro RCA and TF Micro R2 rebuildable decks.

The RCA is meant for thicker single clapton builds. 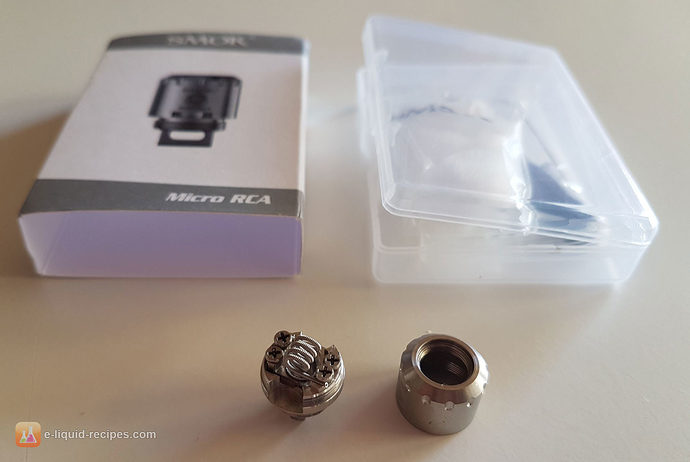 The R2 is a very compact 4 post deck meant for smaller dual coils. 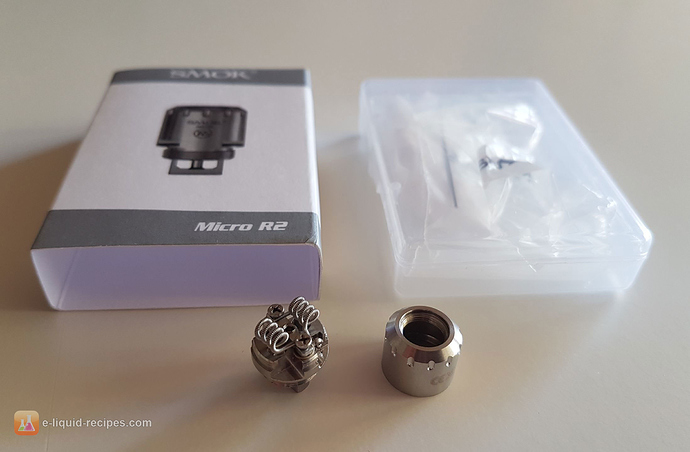 Both comes pre-installed with claptons.

Both of the devices are charged via micro-USB, have an 8 second cut-off, low resistance protection, short protection and low voltage protection - other than that they behave like mech-mods and just pass along whatever power is in the battery to the coils.

I feel like the people who would want the STICK Basic and STICK Plus would prefer the convenience of the pre-built coil heads. Fortunately those are pretty good tasting options.

I wasn’t expecting much out of these devices, but I must admit, I was a bit surprised that they performed that well.

Would I buy one myself? I’m not sure. I am a bit of a tech geek, so I like fiddling and tweaking. But sometimes I also like simplicity. I still use the two devices I tested

I do have a weak spot for the TFV4 tanks though!

I will give away two kits. One PLUS kit and one BASIC kit - both with a pack of coils and a set of RBAs. Tell me below why you like these devices, and I will draw two lucky winners! I will announce the winners on Sunday, May 8th 2016!

The giveaway is over! The winners will be announced in a separate thread

I’ll be reviewing the TFV4 RTA and the TFV4 RDTA soon, so keep your eyes peeled!

Thanks for the chance to win one of these. Would love to have for its ease of use and size looks comfy for me.

Ty for the chance. They would be awesome lil on the go mods. Super cute

This would be perfect for my wife, I am liking smok and how far they have come with their items. I just got my wife a basic ego style pen kit to help her, however she needs flavor so it would be a perfect setup for a beginner. Thanks for the opportunity at this.

If you want a spoiler: If you liked the TFV4 back when it came out - get either of the new ones - they’re fantastic!

I am chugging Bust-A-Nut on the RTA and Floating Island on the RDTA and it’s amazing!

I’m torn between the two, but leaning toward grabbing a two or three of the RDTA’s. Reviews on the RTA have all been good so far. Just waiting to see more on the RDTA. And, I trust your opinion!

Looks good, clean and user friendly. Would love one for the wife, however I’d use it myself. Great review.

This would be right up my alley. Simple and easy. I have been looking for a step up from my set up. I’m finding my spinner is just not giving me what I need anymore. Ty for the chance.

Thank You @daath for the chance to win

These look nice and stealthy in nature! Performance sounds nice. I pretty much have all the vape gear I need at the moment, but, I have a friend or two that would benefit from such setups. I’d probably gift these to needy individuals.

That would be awesome to have right now i use the COV minivolt and a nobunaga mini for work.

It looks like they’re targeting the EU market with the micro tank. No tanks bigger than 2 ml allowed in my country

I would give this one to my sister. I’ve been trying to get her to vape for ages now and she keeps going back to the stinkies. Maybe if she had anything better than an ego battery with a c4 tank it might actually work.

These look great, especially for newbies. The better these small mods get the better the chance of convincing users to stay off the stink sticks.

Need one to make my smok collection complete

i love this device i actually have the smok plus , ive been wanting something simple and something to use to try my juices when they are ready , im not a fan of drippers lthough that would be the easiest way to test my juices id rather make ejuice than build coils great product for what i use it for

Never tried a tank before. Heard the good and the bad. Might become a convert.