Thank you for checking out my review of the Steam Crave Aromamizer Lite DL/MTL RTA which Steam Crave was generous enough provide.

In the box you will find: 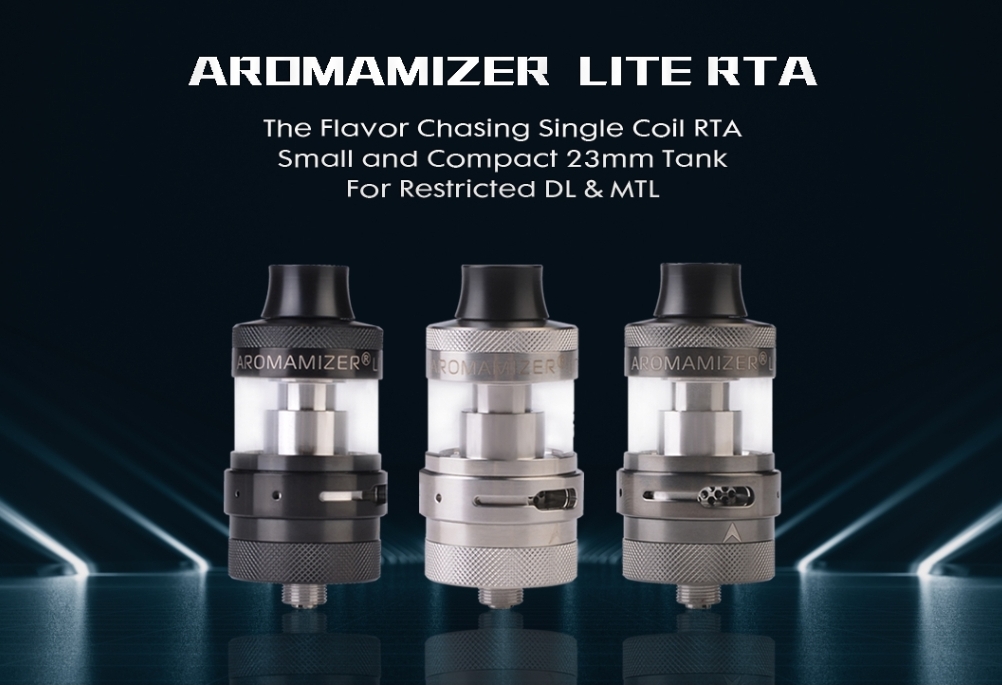 Getting to know the Aromamizer Lite DL/MTL RTA

I am sure many reading this are already familiar with Steam Crave, a company that does not put out new products once a month but strives for quality over quantity. If you are not familiar then you should be, they have a great reputation that is well earned.

One of there latest offerings is the Aromamizer Lite DL/MTL RTA, a dedicated single coil RTA that is said to be a mash-up of the Aromamzer RDTA V2 and Supreme Lite while improving on both.

Upon receiving the tank I broke it down to give it a cleaning and show the parts, I have to say it smelled clean though. 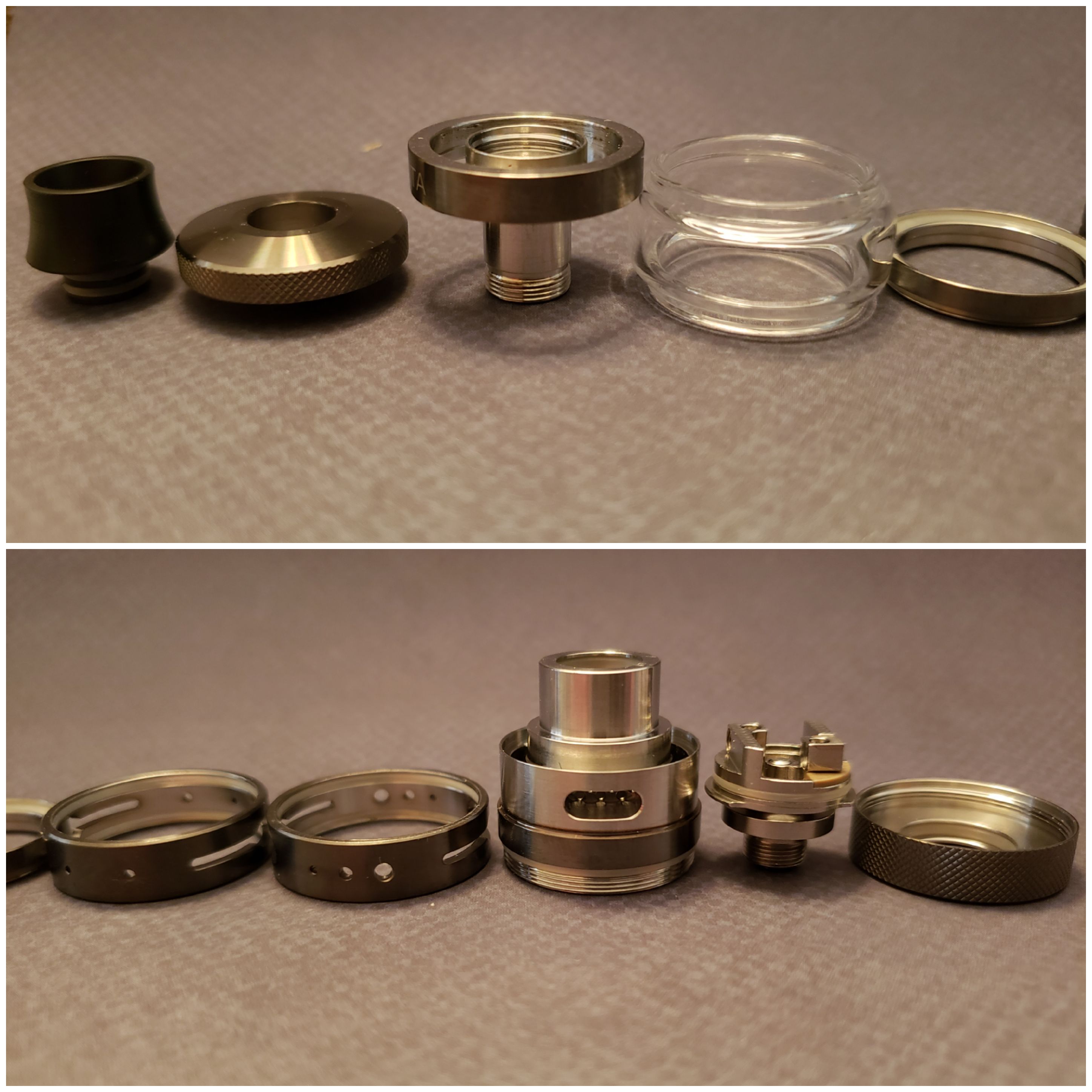 In the pic above you will see (2) airflow rings, I was sent an extra in the box and from what I have learned that is the new airflow ring which is said to improve MTL performance. 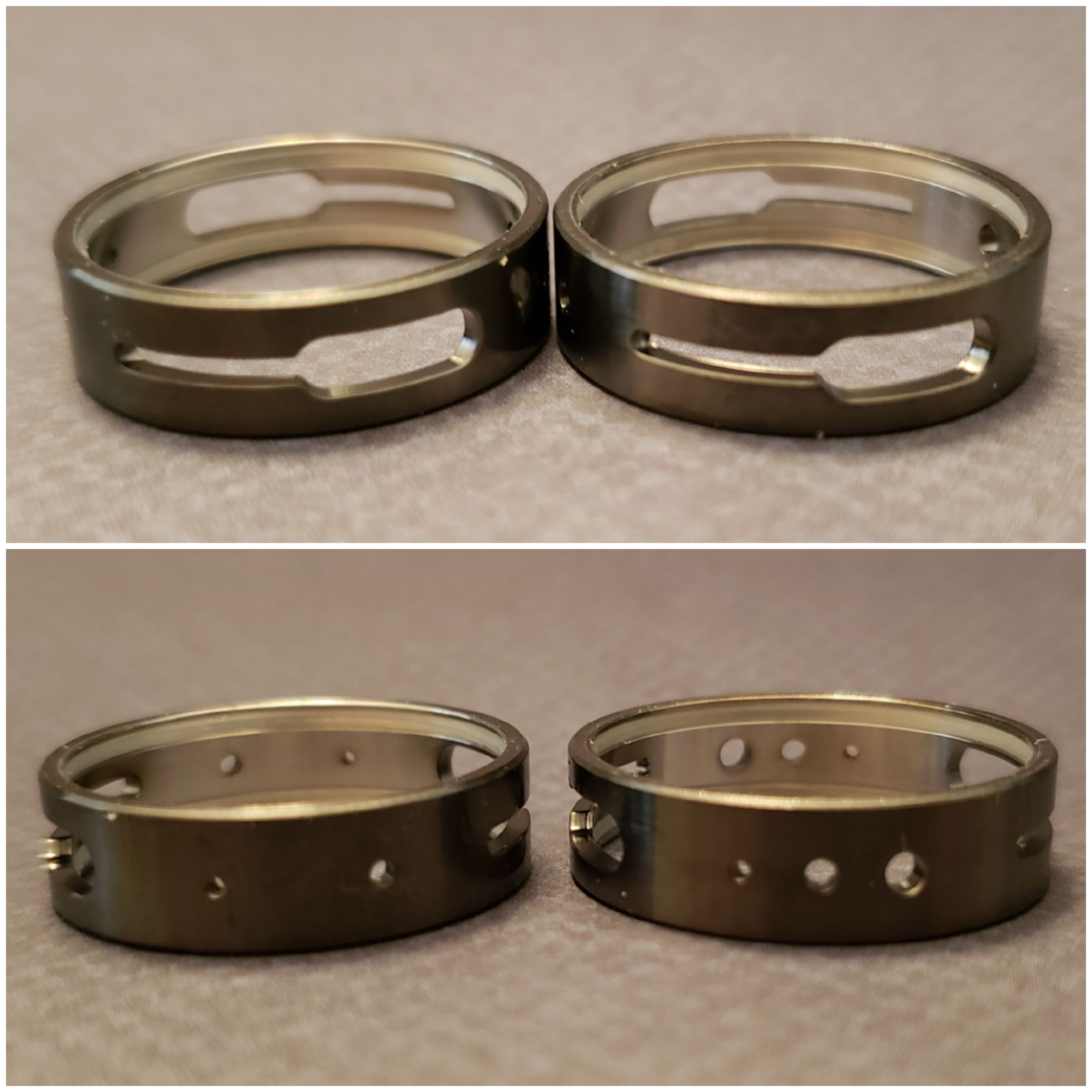 You get (1) Bubble Glass and (2) straight glass, would have preferred an extra bubble instead, that is the one more susceptible to breaking. You also get a bunch of spare o’rings, screws, multi-tool, MTL and DL drip tips. 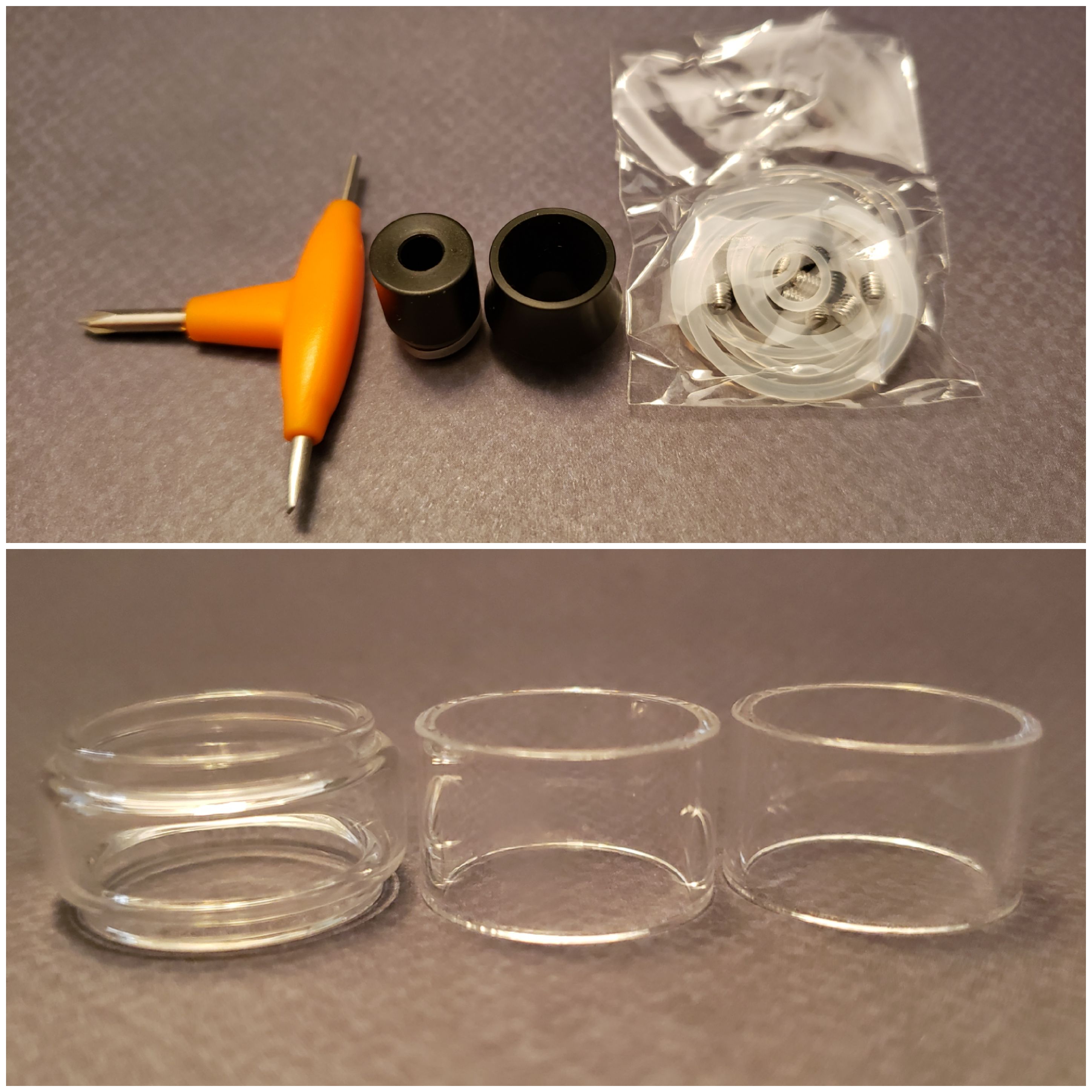 The new chimney is well thought out, dedicated to a single coil with a reduced chamber for better favor and the honeycomb airflow that they use on most of there newer tanks. 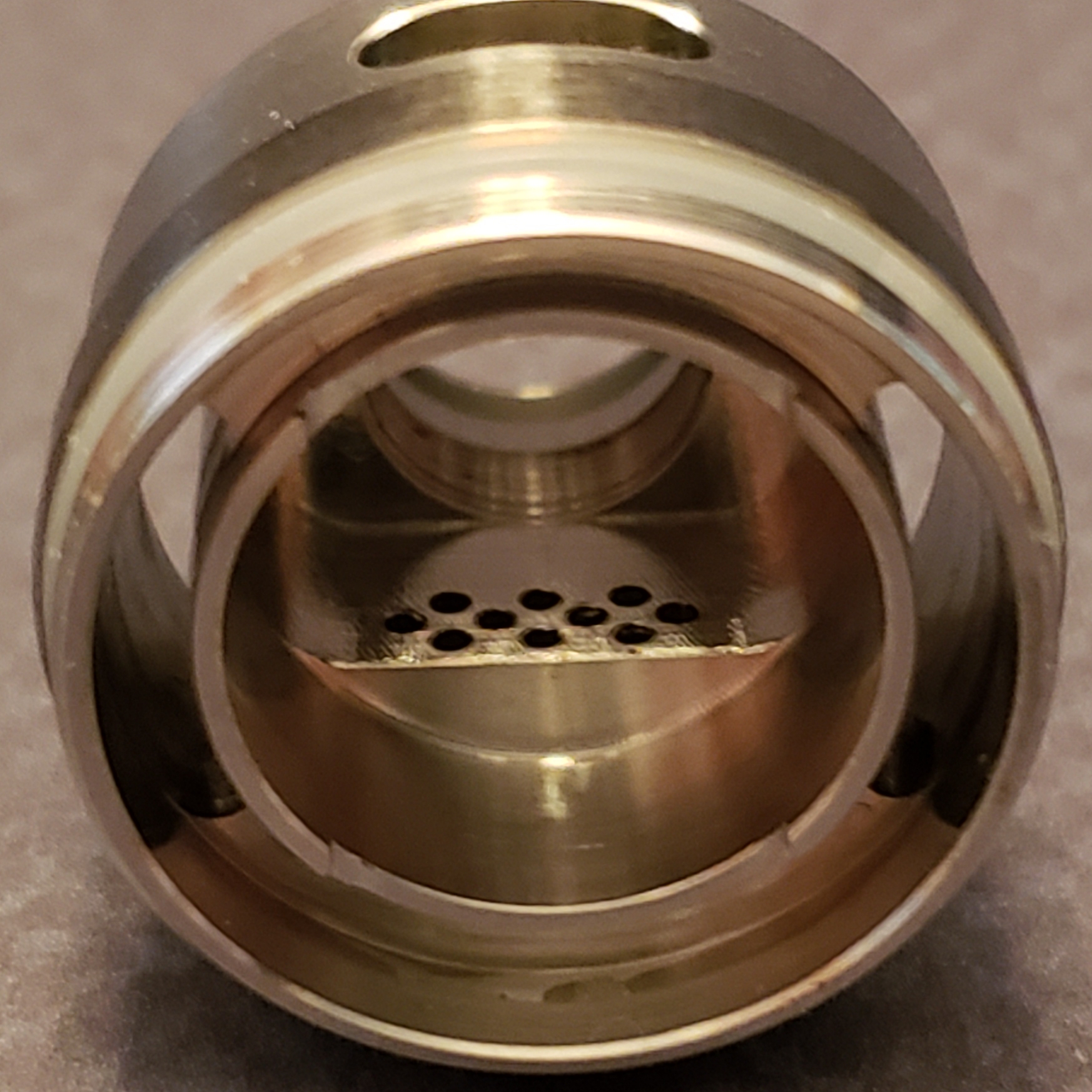 The new postless build deck is the only piece where the machining wasn’t as clean as the rest of the tank. Didn’t run into any problems using it with the 6 or 7 builds I tried, pretty solid deck and the grub screws are great. 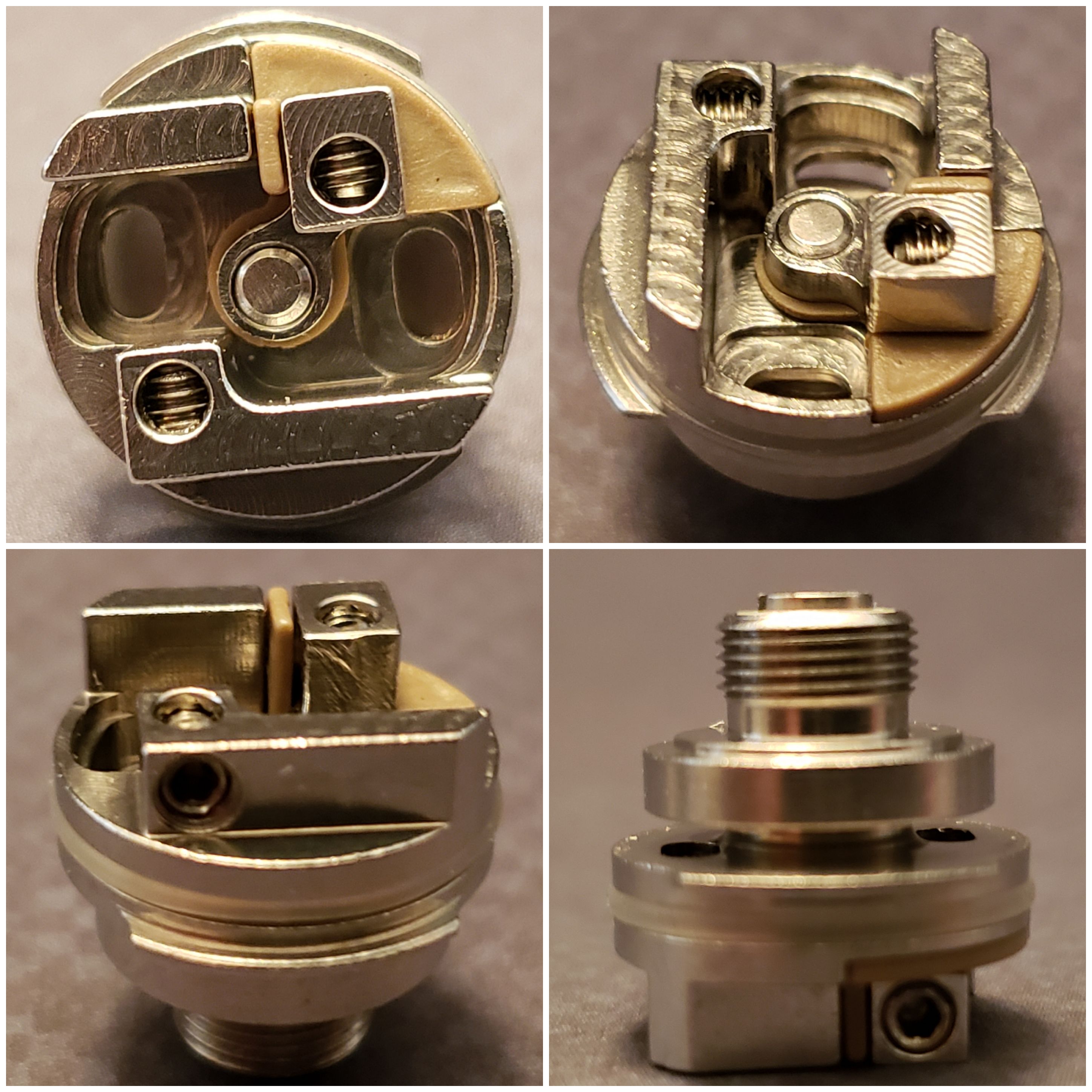 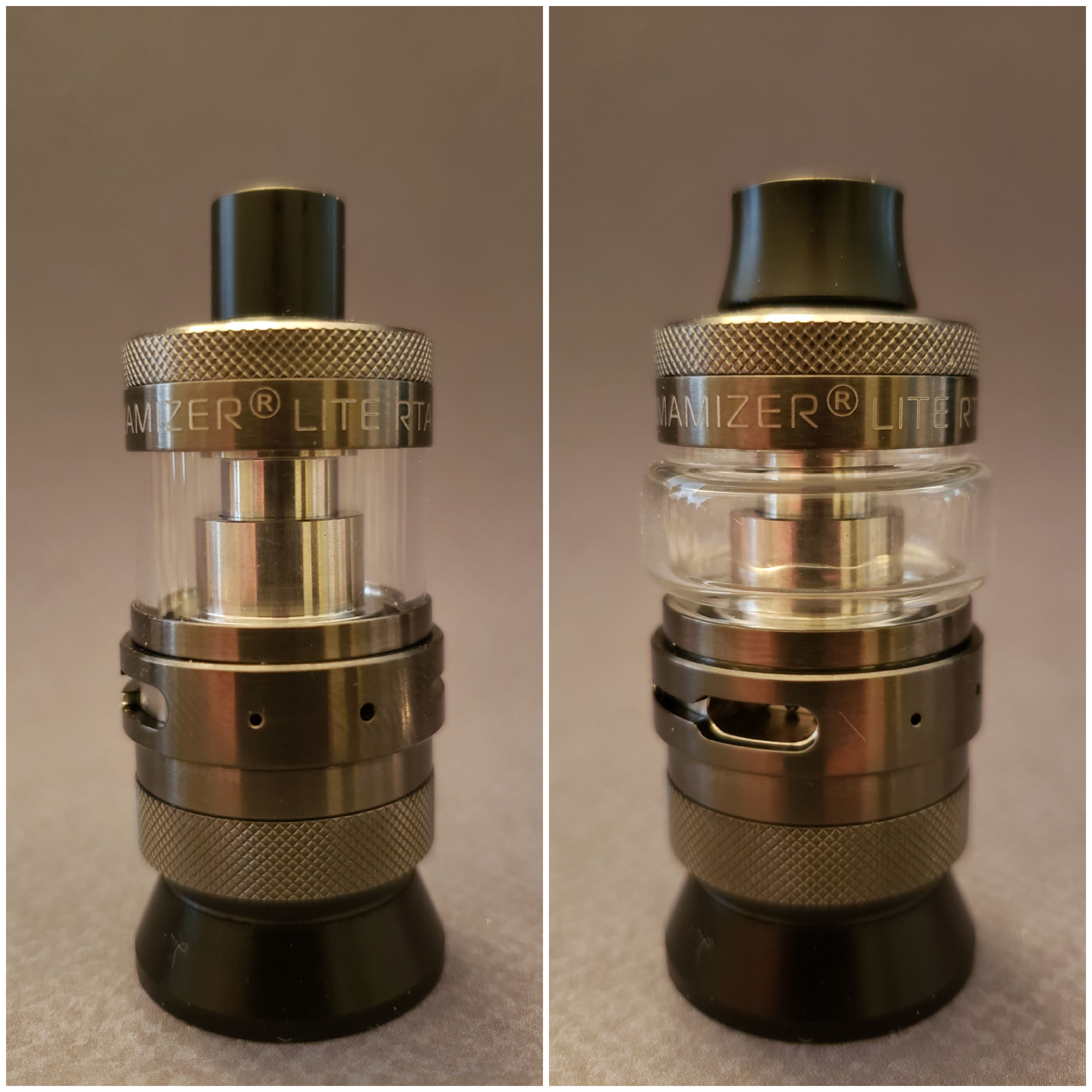 Overall I am impressed with the build quality, smooth threads and that reduced chimney is excellent. My only gripes would be the clear o’rings which generally don’t hold up well long term but have not been a problem thus far. The DL drip tip is also tiny and feels cheap, I replaced it almost immediately.

As already mentioned I did 6 to 7 builds which ranged from straight wire, triple and quad parallel claptons, a couple of MTL builds and most were 3mm but tried a 3.5mm internal diameter build as well. I did not read the manual on my first build and it came out good using a nichrome 80 triple clapton with the legs cut at 5mm. I generally don’t read the manuals unless I am doing a review, figure with over 250+ rebuildable tanks I have built over the years I got a good idea how to get good results. I gotta say the manual Steam Crave put out is damn spot on for getting the best out of the tank though, definitely worth a glance when you get the tank and they give you a spot on length to cut the wicks.

Here is one of my MTL builds using fancy wire on a 3mm post, the other was a single 26g build on a 2.5mm post. 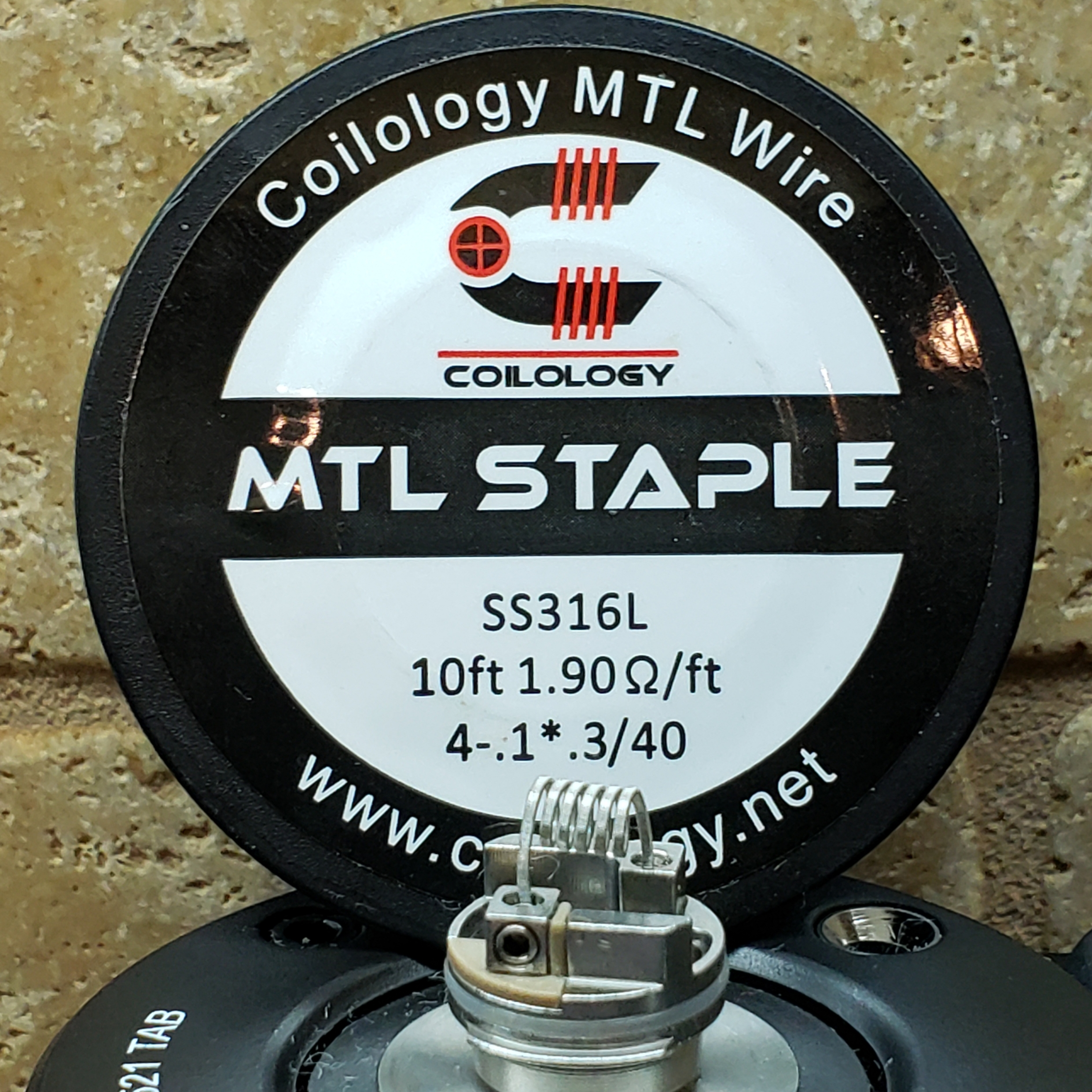 Now I will freely admit I am not a MTL guy but have tried some really good MTL tanks in the past, one of my favorites being the Innokin Zenith. I definitely didn’t get the same enjoyment from the Aromamizer Lite in MTL mode regardless of which airflow control ring I used and switching up drip tips. It just feels like it wants to be opened up as a restricted DL tank to me. After trying 2 MTL builds I was convinced, not it’s strength so I moved on.

After that, I tried a 3.5mm quad clapton, a build I am familiar with other single coil tanks. 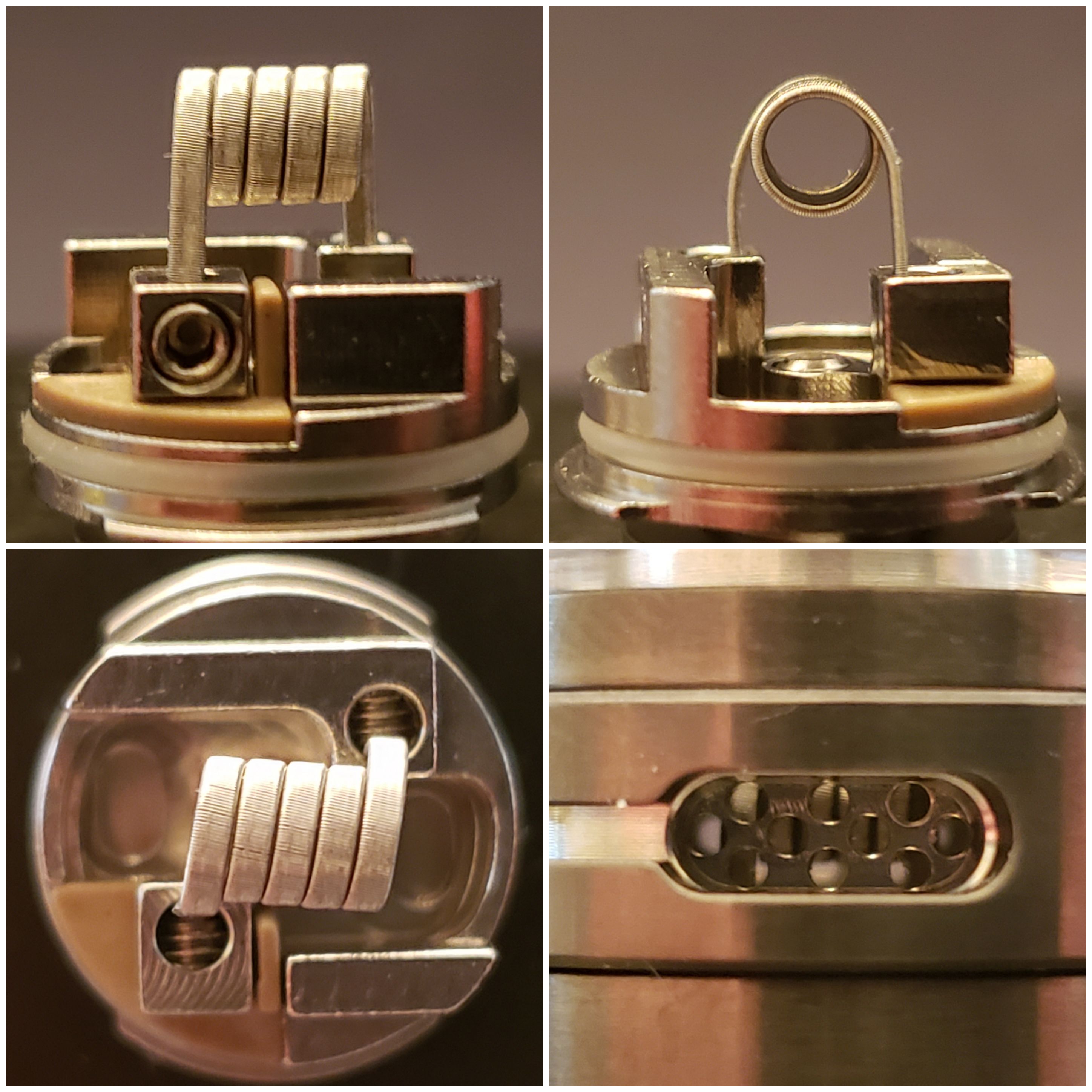 Since it is a bigger coil I cut my legs at 5ml and pulled it up a bit so the bottom airflow holes would go under the coil. It is important to check the resistance by putting on the chimney to make sure the coil doesn’t short. Once that was all done fired it up with the same juice I used with the prior builds and the flavor was a tad off, turns out Steam Craves recommendation of a 3mm coil is pretty spot on.

My favorite build and the one I came back to and am vaping on as I write this review is an SS316L Triple Core Fused 28g x 3 with a 36G wrap spaced coil. 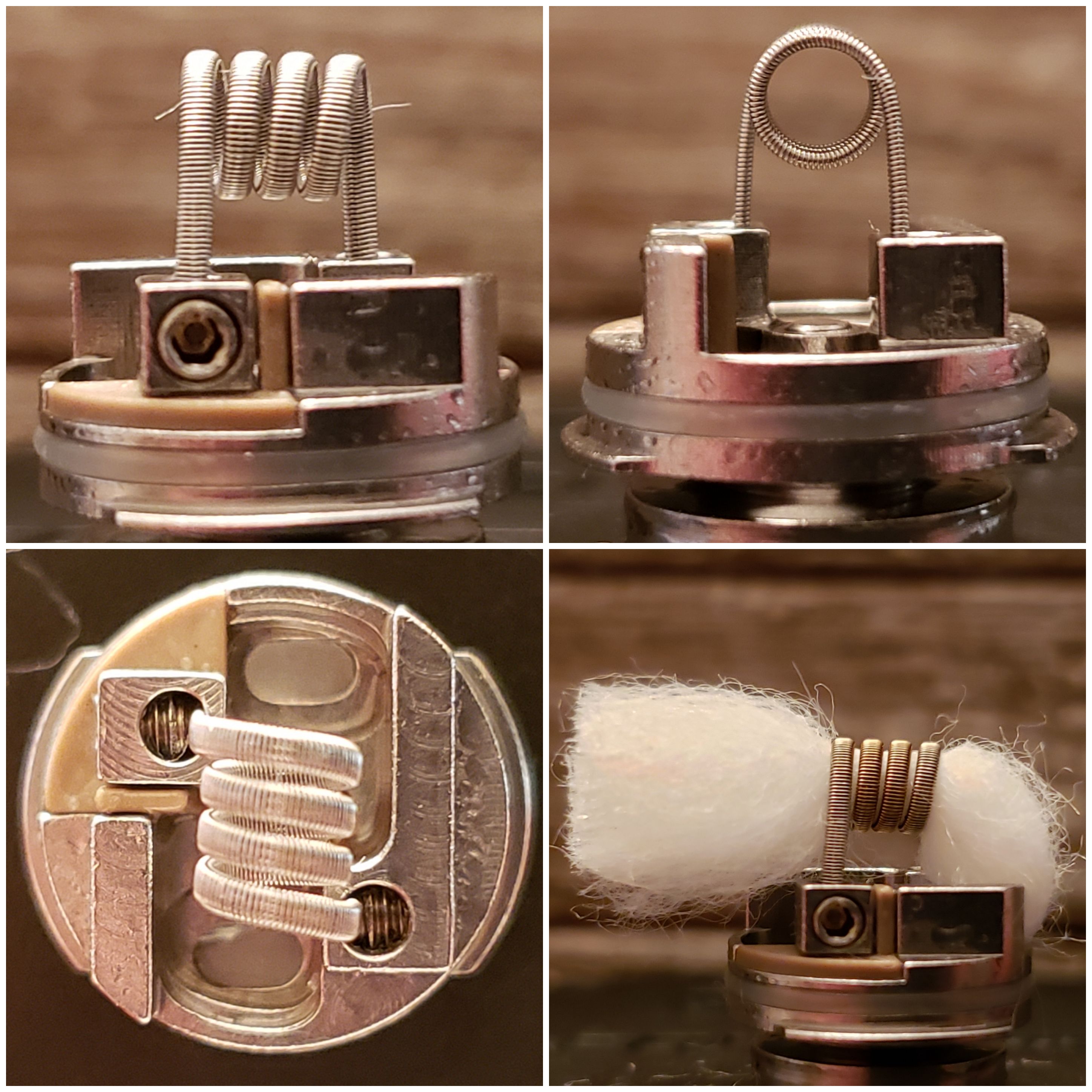 I followed Steam Craves manual and cut the leads 4.5mm for the first build and 5mm for the second and can’t say there is much of a difference, just tasty flavor. Not the thickest clouds but they sure are tasty, I really enjoyed this build and the one I will use going forward.

As far as wicking the manual has it right, just use the bottom o’ring as a guide to cut your wicks. Don’t thin them out, just fluff them and cover the bottom wicking slots. 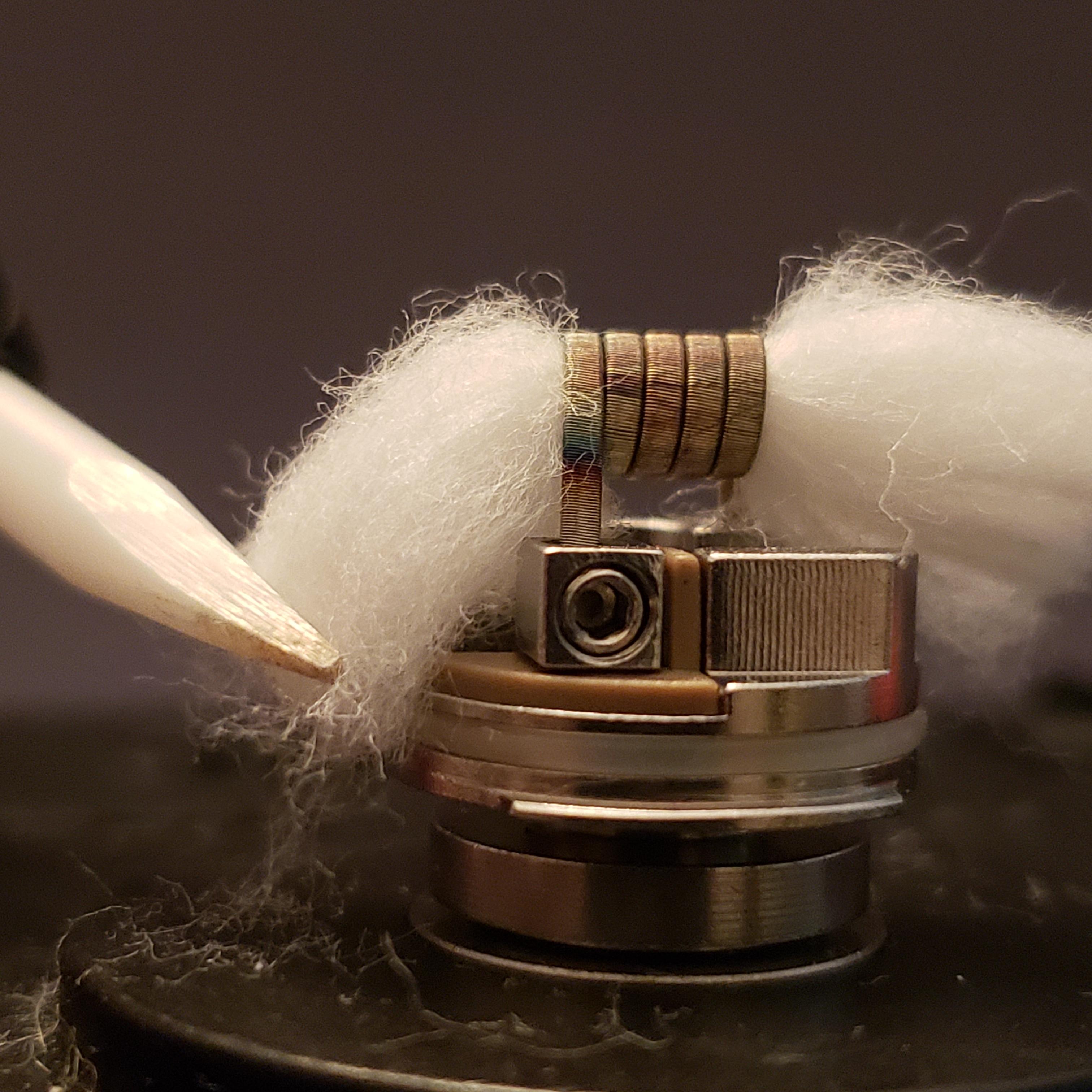 If you follow the manual you should get a very tasty vape and I did not experience any leaking with any of my builds.

I happen to get the Footoon Aquamaster V2 the same day so decided why not, let’s see what these 2 can do. For good measure, I put the same build in one of my favorite single coil tanks, the Asmodus Zesthia. Now the Aquamaster and Aromamizer Lite are pretty close, the Lite just had that extra kick of flavor especially after they both had sat a bit and the coils were nice and juicy. That did make me prefer the Lite over the Footoon but they’re both great tanks. The Zesthia tended to give a bit of a boost to the fruits in the juice, they seemed brighter but the Lite gave a creamier flavor with the same juice. I felt the Lite gave the juice a little better balance as the Zesthia was more top note forward but they both just kick out the flavor.

Really tough to pick out a clear cut winner here, it is going to depend on user preference and what kind of juices they enjoy. I was really surprised at how the Aromamizer Lite brought that cream aspect more in line with the fruits, was definitely noticeable. As far as building the Zesthia is the easiest, followed by the Aromamizer Lite then the Aquamaster V2 but it is not a big difference.

How does it look on a mod?

Being 23mm is a little bit of an oddball size, 24mm would have been nicer from an aesthetics POV. Gave me a chance to break out some of my favorite mini mods though. 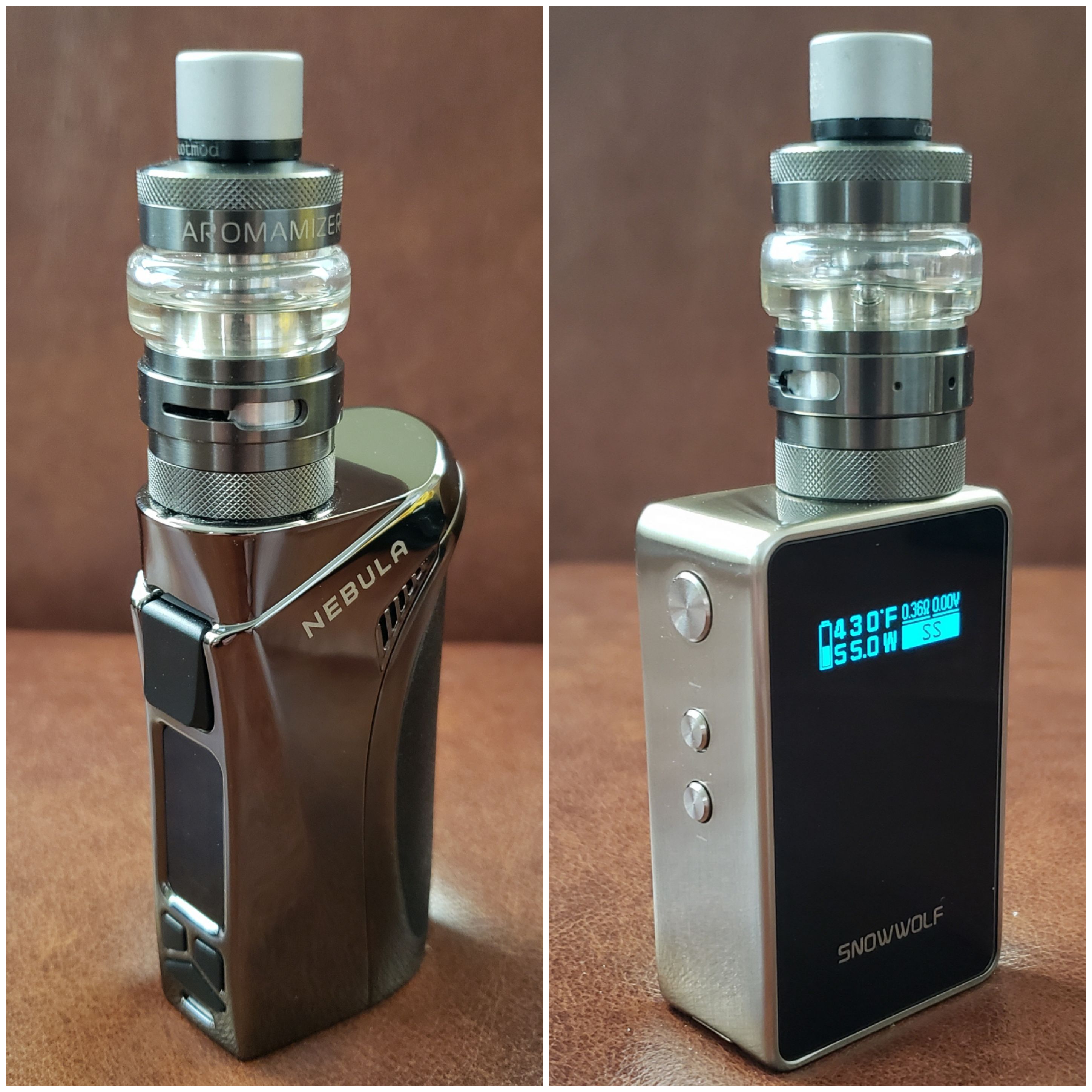 Doesn’t look out of place on my dual battery mods though. 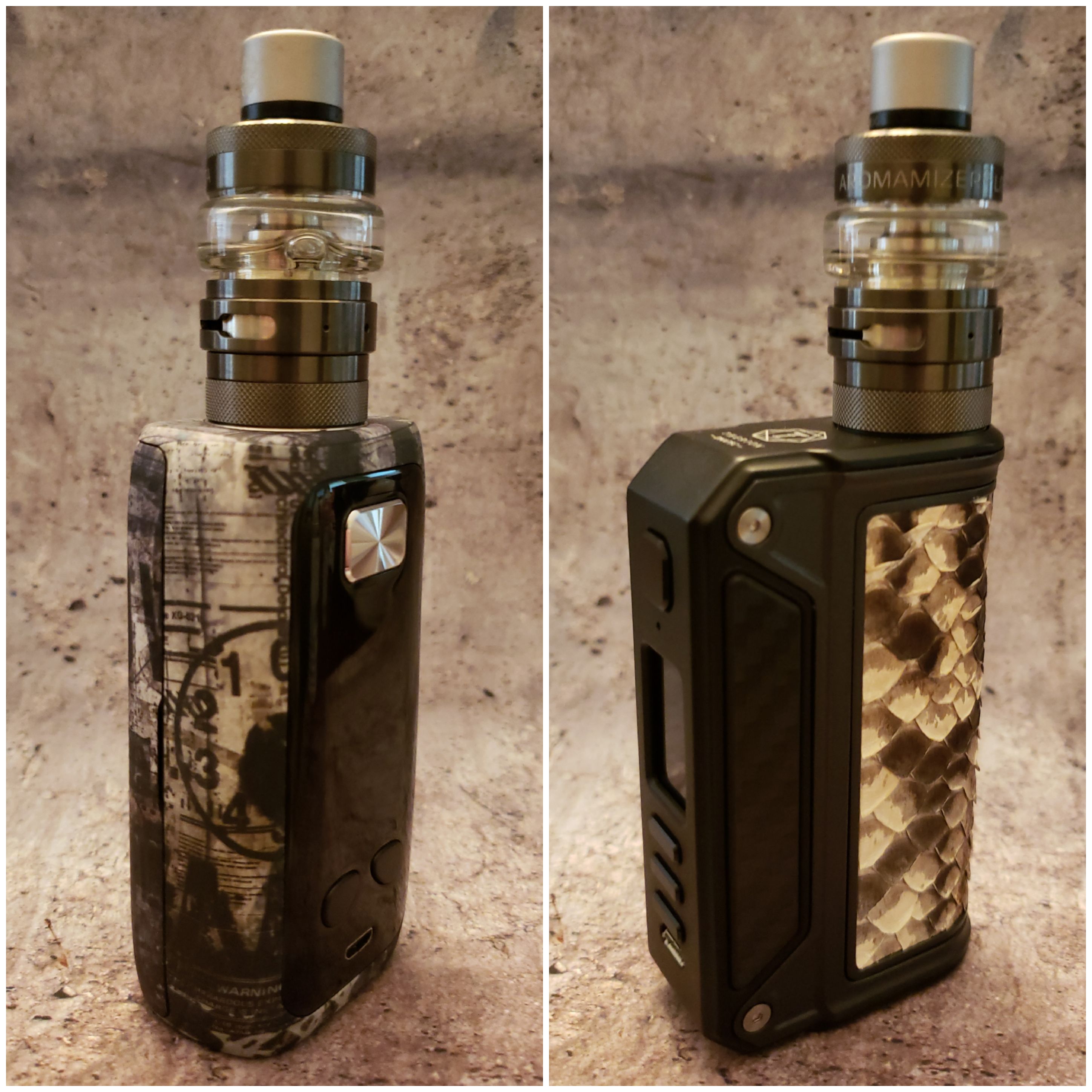 I am happy to see Steam Crave come out with a dedicated single coil tank, sure they have single coil decks for there dual coil tanks but none of those I feel work as well as the Aromamizer Lite. The ease of build, especially with the excellent build guide in the manual, makes it great for newbies. The flavor is fantastic, really impressed with it. Not a cloud chuckers dream but who buys a single coil tank for that anyway?

The only things I didn’t like was the included drip tips, the DL version is great if you have chicken lips I guess, for us normal people it’s ridiculous. The clear o’rings were fine during my review but in general, they do not last as long as normal black o’rings IME. Not a tank I would recommend for a dedicated MTL vaper as well. Not a lot of capacity with the bubble glass, only 4.5ml but it is not a thirsty tank so didn’t find it too troubling.

More info and a place to purchase can be found here: https://shop.steamcrave.com/aromamizerliterta_p0993.html

I may have to revisit steam crave again. Thanks for a good read.

I think this might be right for you, know how much of a single coil fan you are. Vapordna had them on sale, just checked, still on sale. If you get one let me know what you think. I have a juggerknot mini clone on the way based on your recommendation, if I love it will buy the original if I can find one.

Great review, and being more inclined toward single coils, this may just have to go on my list, thanks.

Thanks G! I always wonder how others will like it, haven’t had a chance to check out any other reviews yet. If you do get one would like to hear what you think either good or bad. I am guessing it will be good, just realized I have had the tank over a month with daily use and still gonna use it more.

Hahaha @anon28032772 I know the feeling, got the Passage RDA on my to get list after reading pugs review.

Great review @mjag, and you answered a few “How is SC going to do a MTL” questions for me. Great pics, details, and honest feedback. Great job.

Thank you for the review @mjag

I went back today and tried it compared to a Kayfun I forgot I had. Just a different experience for me, the kayfun is smoother to the draw, the Lite still feels more apt to be a restrictive DL tank, for me that is where it excels.

Gonna look up some other reviews later tonight or tomorrow, interested in seeing what others have to say. Would be great if a MTL vaper who has it here would chime in as well, would love to hear other opinions on it.

Thanks for you review!

My pleasure and thank you for checking it out

Gonna keep an eye on this. Thank you for your review.

Thanks for checking it out delltrapp

Thank you very much for the review. I love my single coil RTA’s.

If you would have told me 2 or 3 years ago I would be using single coil RTA’S and RDA’S as much as I do today I would have said your full of it. They have come such a long way since then I can’t imagine not using them today. The Aromamizer Lite is a great example of this and one that brings a little different twist. It was so interesting to taste a difference using Pacha Mama Fuji compared to the Asmodus Zesthia. Never tasted that creamy element be so distinctively before, it was always more fruit forward. Other flavors were more equal but that Fuji was eye opening.

I have ordered in one of these and await delivery, so I’ll let you know what my impressions are when it arrives and I’ve had a chance to try it out.

Can’t wait to hear what you think, there instructions on how to build are spot on too. Hope you like it as much as I do my friend

Ah…I think you may be out of luck. qp stopped production on the JK Mini. Last I heard they weren’t clear on whether there would be more coming. But worth asking. This was months ago.

Excellent, excellent review!!! Photos (kiss blown), thoroughness (perfect). Personal opinions (honest, unbiased). I’m in a happy mood, can you tell? I like what I heard. I’ve been in the market for a RL RTA and the deck is interesting. Steam Crave is a trusted name, imho. I just might take a ride to VaporDNA. Byeeee…and TY.

The two clones I have are just as good as my authentic jk minis.