I’m struggling a bit with temp settings on these 2 mods and would appreciate some advice. If one of you folks have either of these mods and vape on TC mode, would you kindly share you settings with me and any advice you may feel is useful? The info on the net is a bit contradictory, some sources say that you can only use this mode on Nicro and Ti excluding SS. Others say that SS is fine.

I know nothing about VooPoo. I have tried using my Alien a few times and didn’t like the vape in TC.

I have no experience with the Drag but the Alien is a non-starter with temp control. I have messed with different materials, builds and TCR settings and it really just doesn’t perform well at all. I have been able to dial in a setting that works well for about a half tank and then suddenly goes to hell. I am not sure but I think it has to do with the way that the Alien reads resistance. I just don’t think it’s accurate and consistent enough to maintain a good temp control experience.

That was pretty much my experience too

This was my experience as well with Wismec and exactly the reason why I spent more than I wanted on a DNA device. I still consider it the best investment in vaping equipment so far. No regrets whatsoever.

One of the best mod for tc


Most people here swear by a DNA chipset.

On Wismec/Eleaf devices you can install ArcticFox firmware that makes things a little bit better, but by no means perfect. I’m not aware of something similar for VooPoo or Smok.

This probably has to do with the way the resistance of the metal changes with temperature. The resistance of SS doesn’t change a whole lot compared to Ni or Ti, so you will need better hardware to track the differences for TC.

If you use steam-engine.org, you can easily see the difference on the graphs for the different metals.

In my experience the devices below are the best Mid priced TC mods. There may be others that I have not tried though.

All of these perform well in TC with SS316L. They are not as good as the DNA and Yihi Boards but they are at least usable. Some of the Joyetech/Wismec/Eleaf mods do a decent job when using Arctic Fox firmware but they are very inconsistent.

I don’t have either myself, but from what I have read Smok is in general terrible at TC, and on the Alien it is pretty much a no go.

Voopoo Drag on the other hand should work decently with TC, you just need to set the TCR manually. Somewhere between 1400-1600 (non standard TCR system) should be the sweet spot for SS316L.

another edit : even with this settings, the one with the omega symbol (that’s the resistance, right?) would sometimes changed to a lower number on it’s own and i would get a colder vaping. i have to shut it down and turn it on again to get the new coil? question. if i pressed yes, it will change the number to another (usually) higher number, and better / hotter vape.
so sorry if this is hard to understand, english is not my first language.

I have two aliens. Not the best for TC BUT! For stainless steel if i do 600f 30-50 strength and .00092 TC-SS it is more consistant.
I have no experience with the Voopoo and only have SS wire. Hope this helps 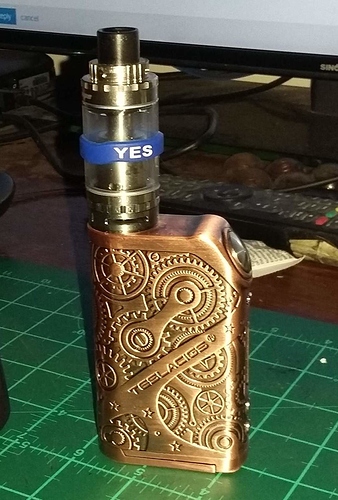 From what I’ve read, TC works pretty well on most TC mods when you’re vaping on Ni or Ti. It’s when you get to SS (what the majority vapes) that you run into issues

It is definitely something that the bigger part of the industry has to fix rather sooner than later.

I have no experience with the Voopoo and only have SS wire. Hope this helps

Have you had the chance to compare this to the TC on a DNA or Yihi mod? 600F is really pushing it and imo not at all the most enjoyable vape.

We have a Sigelei KAOS Spectrum. Which isnt to bad for temp mode, better than the alien.
I wish we could get a mod with a yihi chip. We will one day

I have a Funky 160, a Geek Vape Aegis, an iJoy Captain, an Envii Loch Ness, a Predator, and two Wismec 100TCs. All of them perform better than the Smok Alien for temp control. My biggest problem with the Alien was that it had such a bad time reading the resistance correctly on my tanks. I do SS 316L 27gauge spaced wires for all 12 of my tanks and while all of the mods listed above would read the resistance on any one tank just about the same, the Alien would always read high. And that variance was not consistent - anywhere from .1 to .4 too high. Needless to say, my Aliens have been retired.

Needless to say, my Aliens have been retired

We dont have enough mods to retire them hahaha

I’m hearing this from all angles, and that’s exactly my experience with my own Alien…

My first mod was a Vaporesso Target Pro. When I tried TC I really said “Fxxx this sxxx”. In power mode it could fire up to a temp that was even too hot but whatever I tried in TC, even at max setting it never even got close to an enjoyable temperature.

It’s only when I got a DNA250 that I really started to enjoy it and that I didn’t have to bump the temp up to max to get a satisfying vape. When you have the chance, I recommend you walk into a vape shop and ask them to try it out.

They’re a bit on the expensive side, but if you look on Gearbest or Alibaba or something, I’m sure you’ll find a DNA mod that you can afford on sale. Once you try it and it works like it should, you’re just not going back to power mode because it doesn’t make sense. Powermode doesn’t really have any advantages over TC, but TC prevents the bad dry hits and burning of your cotton and gives a much more consistent vape too. Worth every penny.

600F is really pushing it and imo not at all the most enjoyable vape.

How is that pushing hard? With the way the resistance is set I would bet it doesn’t get even close to warm. Plus the power isn’t that high.