I recently began exploring the options I have with vaping. I wanted to see what it is like to use Temp control.
Before that, I always did 45-50 Watts on my Alien 220W. Depending on the ejuice, I’d go 5 Watts up or down from my usual sweet spot.

I recently purchased Eleaf iStick 200. Updated firmware to Arctic Fox’s latest version.
I built with SS 316L for first time. I tried it on the Eleaf on Watts mode, 42-45 Watts seems to be just fine. However, When I went to TC mode, I was facing a problem. The lower I set the temp, the more likely I’d get “Protection” displayed on the screen when I hit the fire button. this prevents it from firing at all. The higher I set the temp, the more delayed the “protection” message is displayed. Meaning, that rather than showing up instantly, it would fire for about one second before I get “Protection” on my display. I went all the way up to 600 F.

I am sure I am doing something wrong. It might be the coils I built, or the settings on Arctic Fox, or both. Here are screenshots of both. What do you think is going on? I appreciate your input here. 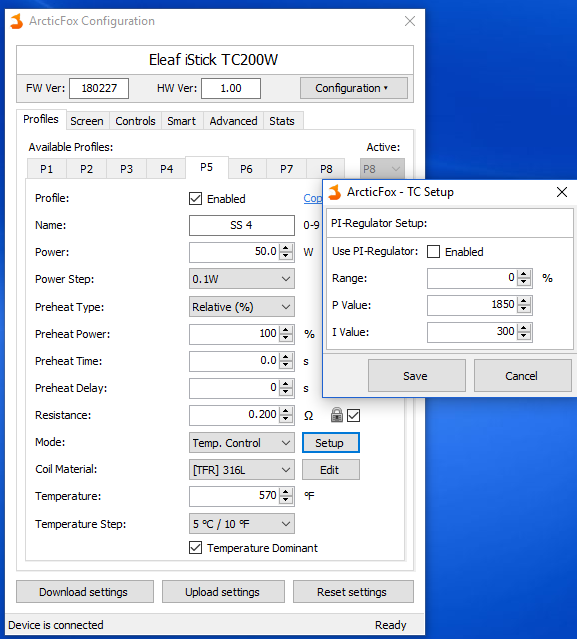 (Must click on image to view whole screenshot of steam-engine) 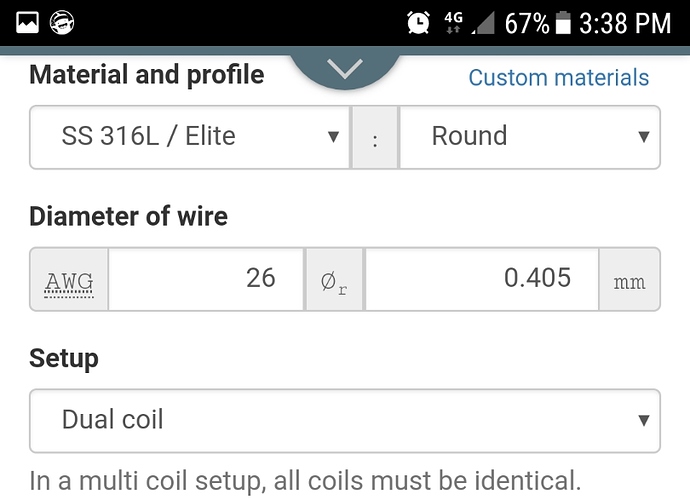 “Temp protection” just means that the coil has reached the temperature you have set it to, and that it is dialling down on the wattage to keep the coil steady at that temp. It is suppose to do this, it is however not suppose to prevent the mod from firing at all. It is perhaps overreacting and lowering the wattage too much, firing at a very low wattage.

IIRC Arctic Fox also comes with a device monitor, if you use it to monitor resistance, temp and wattage and post a screen dump of it, I might be able to tell you more.

Also I noticed that you haven’t enabled the “PI-Regulator” which is AF’s own TC algorithm, without this it is using the build in Joytech TC which is not nearly as good.

I haven’t actually used AF in a while, so I’m speaking from memory here, but I know @Cutlass92 swears by it, so he might be able to offer more help.

What is your coil actually reading? If it is reading 0.22 and you lock at 0.2 then temp control will think the coil is already hotter than it is

Try unlocking the resistance, let the coil cool down, and force it to make a new reading. It is important that the cold resistance is locked in correctly.

I will unlock it and get back to u guys soon. I don’t think this is the issue though.
My initial thought was that the watts and the set temp are not matched. So maybe bump watts up to 70w and try 480 or 500 F.

This just an idea. I don’t know if mismatch is my problem tho

Proper wicking/juice flow is vital too. If you don’t have saturation of your coils they will heat up quickly, triggering the mod to reduce power to the coils to cool them down. If juice isn’t there to perform that function, then you’ll get an anemic vape at best, or none at all. I don’t mean to insinuate you don’t know how to wick properly. However, I will say TC made me much better at it and I learned so much about building and wicking from the determination to get TC right.

Also I noticed that you haven’t enabled the “PI-Regulator” which is AF’s own TC algorithm,

Do you know what set up u have for PI? I read from other threads that P must be lowered to become 300-600 if using a simple wire build.

I can’t remember the exact setting

, it has been almost a year since I used it, but I believe it was in the 400-500 range, perhaps a bit higher, but definitely considerable lower than the default value.

Btw, u didn’t say anything about my coils, watts, and temp. Does anything look wrong there?

I spaced them a bit.

I took settings for AF from @Cutlass92 and played with them a bit. He had 150W. I lowered that a bit to 130W because of my understanding of Mooch’s explanation of batteries (feel free to correct me if I’m misunderstood anything). I have three 20A batteries. According to Mooch, to get the Amps that you need per batter the equation is:
watts per battery / battery cutoff in volts / the % of efficiency.
(130w/3 batteries= 43.33 W per battery)
(43.33 / 3.1 v / 0.8= 17 A per battery)
I assumed efficiency to be %80 just to be safe.

Anyway, thanks for your input everyone. The TC settings that I am ok with for now are the following: 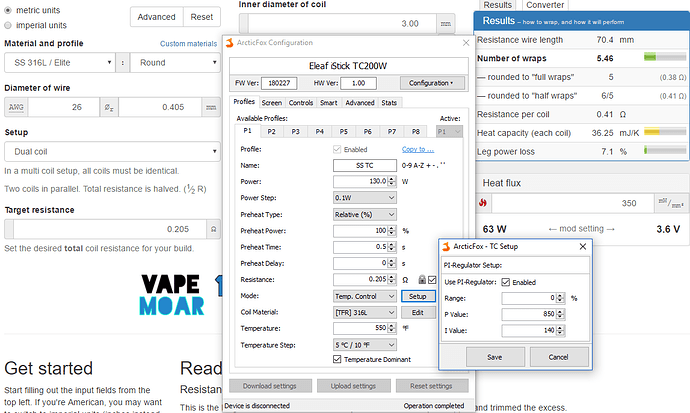 I’m glad that’s working for you! If you find something you like more let me know.