The most ignorant things you have heard about vaping in person

Ok … I didnt know what to name this thread so feel free to change the title … Im sitting at work and a guy comes in and sees my Mod he ask if ive been following the vaping stuff…I say " ive been followng it for years " what are you talking about … Ignorant guy says… The doctors are now saying they are finding popcorn stuck to peoples lungs … A growth of popcorn . My reaction was OMG do you know why they call it popcorn lung and i start breaking it down , he immediately comes back with "Well that’s what there saying up in Canada…

My new nurse told me that vaping causes popcorn lung and I was like, “Oh really? I’ve read medical journals stating they improve lung function in ex smokers and that’s a journal. Not a yoga instructors blog” She kept quiet after that

Mom “that vape thing causes throat cancer”
Me “no it doesn’t”
Mom “yes it does, the article in my magazine said so”
Me “sigh”

Eh, it’s always been this way with mom, everyone but her kid knows what they’re talking about.

Yeah, I was vaping a mint at the time and was going to tell her that it wouldn’t contain diacytl but I got my point across 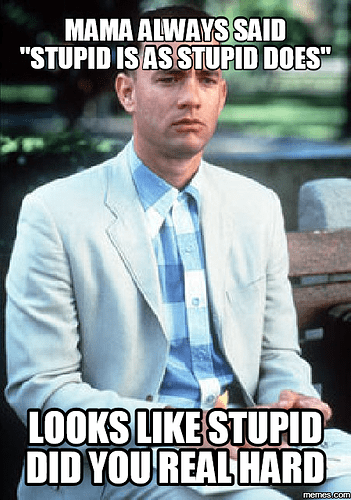 Depending on my mood, I’ve been known to say to someone giving me their thoughts on vaping, “Thanks for telling me that. Do you have any other ignorant opinions you wish to share with me.”

You know that’s worse than smoking… LMFAO. I hear it often.

Also, my non smoking mates refer to my kit as the “douche flute” - hard to argue with that one LOL

Popcorn lung is the most common thing I get. That myth really reached a lot of people unfortunately. I belong to a methadone clinic, and the head Dr there (she’s very nice mind you) actually told me I’m better off smoking cigarettes than vaping, and smoking pg and vg are far worse than tobacco smoke. She keeps trying to get me to quit vaping and I told her I’d probably start smoking again and she actually told me that’s OK, I’m better off going back to tobacco. Smh but she’s so nice so what do I say, Dr’s are notorious know it alls especially when it comes to a health topic, what can I say to her.

LOL, wow @fidalgo_vapes that one’s a hard one to beat. Just had a company cookout yesterday, and had the President of the company spot my Double Barrel mod on the table and struck up a 20 minute conversation about vaping. No funnies, but he had no clue about anything vaping, so I gave him the full tour.

Have her give my doctor friend a call. Her hospital is now recommending vape products to their patients. This particular hospital is known for their expertise on the addictions and they have one researcher whose job for the past 20 years was too research tobacco harm reduction.

One day I get a call from my doc friend asking if I could recommend some devices for her patients. I was blown away. Apparently, these professionals actually read scientific papers and possibly do some inhouse testing themselves. Idk, I didn’t ask.

I wish I had something funny as hell to say but this is what really gets under my skin. I have a friend who is an intelligent person but she’s not a scientist. She has debated me on FB messenger about the subject even linking me to scientific papers or articles. Problem is, not being a scientist she didn’t recognize that the papers she read were based on flawed testing. Results that were conveniently made in favor of the FDA and other organizations against vaping products.

This widely spread information intended to fool the masses makes me ballistic. Her insistence that she was right and I was wrong forced me to stop contact with her. She just wouldn’t back down and it was getting so tiresome.

I get it that vaping is new and we don’t have any long term evidence but when my doctor is happy, I’m happy. I breath better, I don’t feel sick and dizzy and I haven’t had a respiratory infection for 5 years…

Where I came from, people still thinks vape = meth. I just got this from my aunt in whatsapp 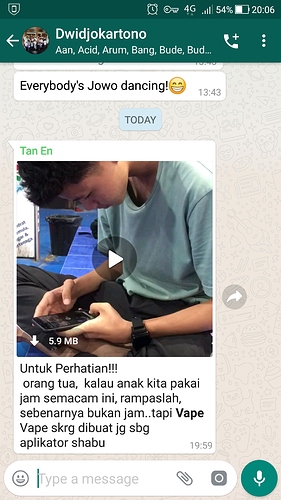 I’m just glad that most doctors I run into here tell me they’d prefer people vape then smoke, it’s the media that seems to be the wrench in the works! THE SPANNER IN THE GEARS M8s! YOU WOT?!

I’d be more worried about that kid’s phone zombie neck!

I was told that vaping is going to cause me to drown. The ignorant person swore up and down that people were already drowning from vaping because it puts water in the lungs. I am still vaping 5 years later and have yet to drown! He was one of those that always had to be right but never actually was.

Have we been vaping long enough to truly know the risks or potential risks.?
Remember it was only 50-60yrs ago they said smoking was harmless.
I’m of the opinion that it must surely be safer than smoking but it cant be merely harmless.
Inhaling vaporized Propylene Glycol, Vegetable Glycerine and Food Flavouring must surely have its drawbacks somewhere down the line.

I’m not sure if any money is being allocated for the study of vaping effects. It’s a difficult thing to do once you start thinking about it. The first major problem is that most vapers are ex-smokers. How could you possibly separate the effects they got from smoking from vaping. I smoked 26 years and have been vaping for 3. If I got any type of cancer tomorrow, you know people would say it was from the vaping, but common sense would say no.

They’d have to only study those who are never smokers and most of those are teenagers, I believe. They most likely have only been vaping a very short time and probably not at the same rate that most ex-smokers do. I go through 60 ml a day, granted it’s on RDAs running at .1 -.2 ohms, but it’s still a lot.

The thing that bothers me are those who like to say, “But we don’t know the long term effects of vaping.” That’s true, we don’t. However, we do know that cigarettes do have a noticeable effect without having to wait 30 years. The diminished lung capacity being one of them. I think most sane people can agree that the long-term effect of smoking is dangerous and lethal to many. I’ve yet to see any real study that has shown any negative effects from vaping. All we have seen is bullshit science and speculation. When I’ve asked people which is better, the known dangers of cigarettes or the unknowns of vaping, they seem to get it. But it has to be laid out for them.

I tell people that if the FDA, and their counterparts around the world, waited for 30-40 years to see if drugs had long-term effects, then we wouldn’t have many drugs because BP wouldn’t make much money doing the R&D and then waiting 30 years to get their money back. I have also asked people that if there were a disease that killed millions of people every year and a cure for it was developed, should we wait 30 years to ensure the long-term effects were benign. It’s really how we frame things that can get people thinking logically and rationally. Unfortunately, we know the media never does that.

Just got into a rather heated debate about vaping last night, matter of fact. What Mr. 0.5% BMI didn’t realize was that when he hit me with the whole " Do you know what is in those things?" (Replete with yoga-mom attitude to boot) that I knew EXACTLY what was in my juice. I told him that he needed to hit Dr Farsalinos’ site if he wanted the real truth and not the load of manure that the FDA and that dumber-than-a-bag-of-hammers Truth Org have been shoveling.

Oh, also had a woman exclaim in horror that I was inhaling battery acid. Where the hell do people get this horse pucky?!?!?

Oh, also had a woman exclaim in horror that I was inhaling battery acid.

I wanted to say that you win, but it’s kinda sad at the same time…