I’ve seen the term #teamfreeshit and others mention reviewers getting free shit while a lot have to pay for their vape gear.

If you have never taken the time out to take the pictures, try different builds, get the perfect drip shot, try to be as unbiased as possible, take 8 hours or more out of your life to do a review and then post it to 10 different vape forums…then shut your vape hole. You don’t have a clue the time and effort that goes into a review.

Personally, I buy all my gear. I stopped doing reviews. Why? Because the reward isn’t worth the pain…to me. To others, I enjoy their work. I know what they have put into it. I can appreciate what they have done.

This also applies to flavor testers. “Hey! Free flavors!”. Think that sounds good? How about getting 20 at a time and making the base, bottle them, test them, make solid notes, get pressure from the vendor to get your thoughts. Sound like fun? It isn’t all that. It is work.

There is nothing free about it. If you don’t know then let it rest.

Great Post @TheTinMan! I get the vibe from time to time that some folks are envious and even spiteful. I’ve said it numerous times. although I like the way you put it better, doing a review is the most expensive way to get a mod that I know of. I easily rack up 8 to 10 hours on a review and if I’m doing that on a $50 mod that’s between 5 and 6 bucks an hour. For me personally, I just enjoy digging into the electrical characteristics of mods and editing videos. I also believe others can benefit from the videos if they so choose. There’s obviously some equipment involved as well. I would urge folks to really look at a lot of the photos that are presented. Pretty amazing stuff. Glad to see this posted. The rest of the story!

Dohh! I read the threads in the wrong order! I would not consider any of the reviewers here at ELR #teamfreeshit but if they were they would no longer be receiving anything from most manufacturers by now.

Hey I thought this was a give away. Lol.

The rest of the story!

Maybe I’ll get there once I get more routined but it takes me a lot longer than that.
Taking pictures, noting everything there is about this thing and when I got it all down the shaving off starts.
Is this really necessary? Should I add this instead? How can I make it flow a little better, not to mention the hunt for some funny stuff to add to make it easier on the eyes and brain.
I enjoy it, don’t get me wrong but if I would spend that amount of time doing an actual job, I could probably buy the item 10 times over.
Thanks @TheTinMan for shedding a light on this 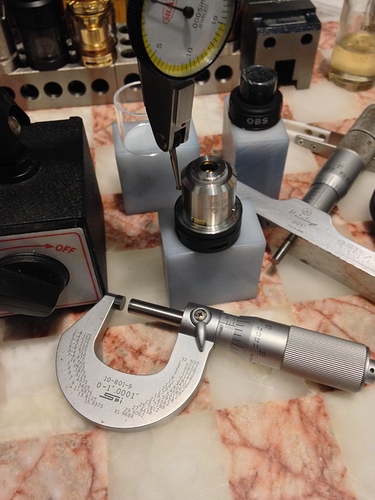 Very nicely put @TheTinMan and thanks for recognizing how much WORK goes into putting one of the reviews together.

@SmilingOgre and @Josephine_van_Rijn your statements about doing the reviews are so very true.

I have just started doing some and it is a lot of work, especially when you run into an issue with a device and you try to find a solution.

I will say this as well. I have grown to trust the folks on ELR doing reviews way more than I trust what most of the big guns on YouTube put out. I have been burned several times on purchasing gear based on there reviews because they just did not spend enough time using the stuff to find the faults.

Hey I thought this was a give away. Lol.

I missed the reviewer bashing, maybe it’s because I’m not doing it very long yet.

I’m looking forward to yours

I have grown to trust the folks on ELR doing reviews

Personally I’m not doing reviews to please the company that sells gear but to try to inform people about the good and bad and hopefully manufacturers take note of the bad and improve their products accordingly.

It’s a win-win situation for a manufacturer if flaws are pointed out. They can continue to sell an overhyped shit product but eventually the truth will come out and sales will drop.
Adjusting their gear will get them respect from the community and they’ll be better off in the long run.

The same goes for reviewers who are not telling the truth, people will stop listening to them.

I missed the reviewer bashing, maybe it’s because I’m not doing it very long yet.

I haven’t seen it either. But I typically scroll through a he review quickly and rarely participate or read the rest of the thread.

Maybe there are too many reviews these days, but I for one have never been ‘jealous’ or thought of them as freeloaders. It took me long enough just to write this post; I would not want to put forth the effort to make a decent review. I’ve been hounded by vendors a lot but I have zero interest in #teamfreeshit personally. I figure, anyone who is envious could probably easily get a vendor deal for themselves!

The bashing came up on another thread. And it has come up in the past.

Instead of unloading fury on the other thread, maybe someone who thinks what reviewers do is just to get free shit will read this and realize that it isn’t all that they think.

You don’t have a clue the time and effort that goes into a review.

There is nothing free about it.

I wasn’t sure if that is/was/is a real thing or not, but apparently so. You are right @TheTinMan reviewing ain’t all it’s cracked up to be, and SURELY looks all fun and candy-like, UNTIL you’re the one doing it. You already covered all the bases, so I won’t start on a rant, other than to agree with you. Hell, just the pictures alone can take awhile, the testing, note taking writing, RE-writing, etc., all cuts into the time sucking black hole that is reviewing. THEN, if you’re really lucky, and the post office borks up the shipping, now you have to play “Dude, Where’s My Mod” ?? to track it down, and then there’s always the nice lil’ pressure you get from the manufacturer, “Hey, how’s that review going, we haven’t seen it yet” (nudge, nudge).

I typically scroll through a he review quickly and rarely participate or read the rest of the thread.

I have no doubt you are not in the minority. I do how ever believe that a lot of GOOD comes from people reading thru the comments and jumping in with suggestions sometimes.

The bashing came up on another thread. And it has come up in the past.

I guess I must have had my blinders on that day…

I have no doubt you are not in the minority. I do how ever believe that a lot of GOOD comes from people reading thru the comments and jumping in with suggestions sometimes.

Agreed @wvsanta. For me, I actually find BETTER information on reviews done here, and on @Steampugs’s site, and more than a few times, it’s been far more ACCURATE than what I’ve seen on some of the YT Reviewer’s vid. reviews. It has actually gotten to the point, where I AVOID YT video reviews (not @SmilingOgre’s BTW !!!) and read the ELR in house reviews and …
https://vapingcommunity.co.uk/

I appreciate the exception but I can understand where YT reviewers may have to try to maintain a balance, especially if they are making a living at it. That just isn’t my situation. What I don’t need is another job. I seem to have plenty and plenty of offers every day. I’m trying to wind down. I’m formally retired. If a manufacturer drops me it’s all good. They don’t need me and I don’t need them. There will always be something worth looking into and doing a review on. I haven’t stopped buying things by any means. Thank God, I have slowed down. It was getting ridiculous.

And here I thought (just by title!) this was about those that stalk free vape deals

Gosh knows… seeing the same people over and over… I get it folks might not have enough to make ends meet, I was there at one point. Put the effort in tho, and you will see yet another side to #teamfreeshitleachers

I thought I was going to find some secret truth about a team that goes about the world collecting free shirts! #teamfreeshirt