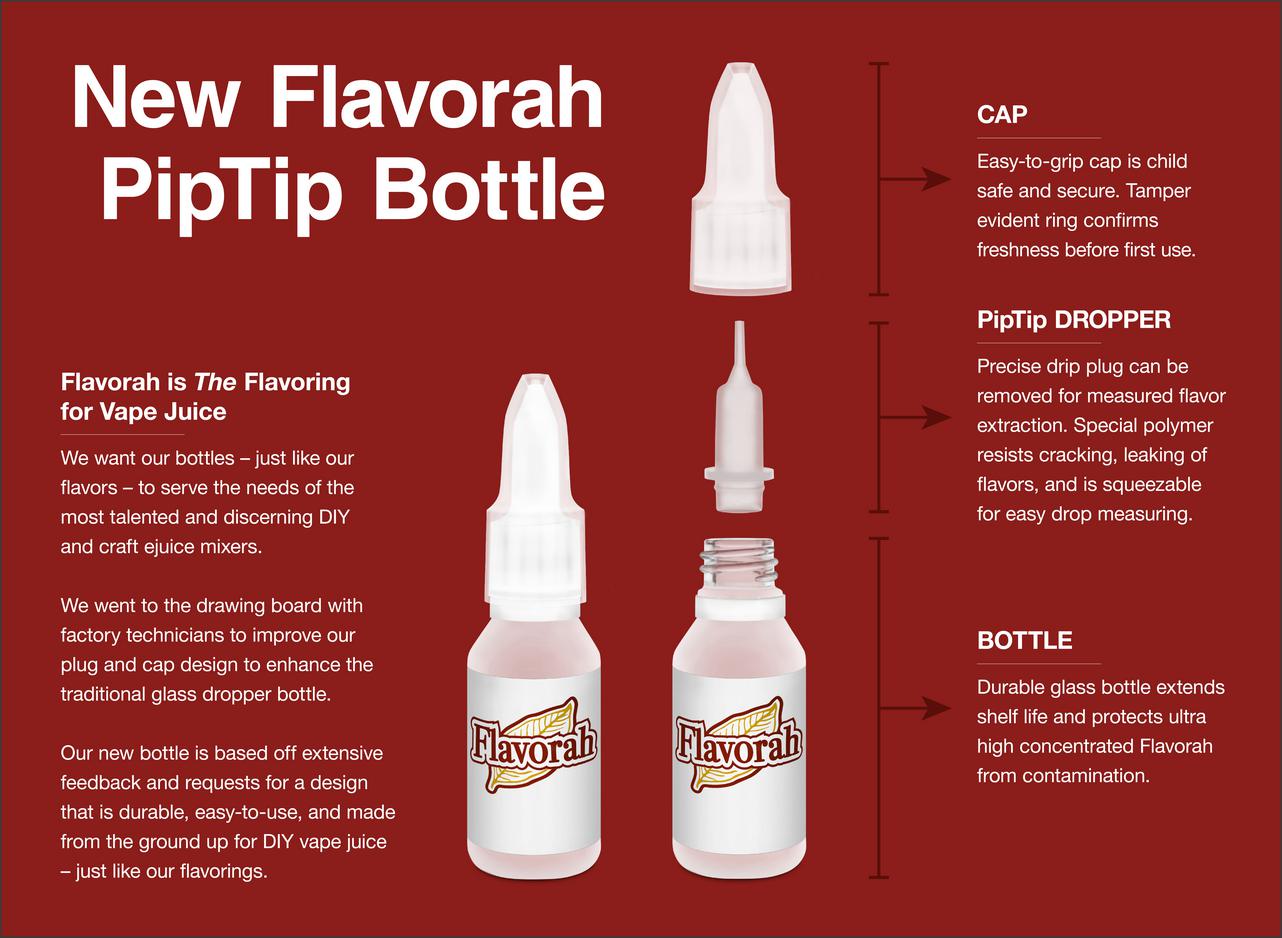 At first when I saw the new Flavorah bottles I thought it seemed like an interesting new(er) approach, but at the same time, not really sure what they were trying to solve BY using the new bottles. Sure, sure, we’ve all had issues with crushed, or over-tightened bottles from the past from Flavorah, but many vendors seem to be able to manufacture your standard, child proof, twist tops with no issues. I’m using these newer bottles more now, and am not quite sure what I think of them. The bottles are far taller than any of my other racked flavors, so these new ones block others from view due to their height, and after trimming the tips, and squeeze, squeeze, squeezing the bulb (or whatever it’s called), I seem to end up with flavor on my fingers all the time now. It seems like they don’t really seal well, meaning by simply shaking up before mixing, quite a bit of the flavoring ends up in the cap, and on the squeeze bulb. Realizing this was a newer approach to bottling, I’m having issues wherein I don’t think it was a BETTER approach. Anyone else ??

I stopped buying Flavorah about a year or so ago. Are they really “ultra high” concentration now? I remember some of them had high concentration. In my opinion, they just are not worth the price. If I win the giveaway on instagram I guess I’ll find out.

I don’t like the new bottles TBH. The fact they are now glass is both a good an a bad thing. I suspect they will keep for longer but the tips are as you say messy alongside the fact it now costs almost 2x as much to get them shipped from the states I think they are a fail.

I don’t see the big fuss about it though. The new tip is (according to them) designed for easy drop measurement. Can’t be a bad thing, or is it?

by simply shaking up before mixing, quite a bit of the flavoring ends up in the cap

before shaking, unscrew cap, hold your gloved finger over the tip

I’ve had a couple like that from other brands, just cheap droppers/caps i assumed

I like the glass but its so heavy compared to all the other bottles it feels weird switching to them.

When I turn them upside I get the feeling if im not careful enough I’ll do something wrong and the plastic-stopper will come out and dump the full bottle on my scale.

They work but it’ll take some time getting use to it.

Ok I’ll will never get use to it.

I just transfer it to a better matching bottle.

I stopped buying Flavorah about a year or so ago. Are they really “ultra high” concentration now?

@Dan_the_Man I have quite a few, and although I’m not sure if theyr’e ULTRA high, they are high-ER concentrated.

The only “new” bottle I have is the Vanilla Custard and not too impressed (the bottle that is, not the flavor). Can’t remember how but I’ve managed somehow to crack the white plastic insert inside the top cap. Also, after I give it a little shake before mixing, there’s concentrate leaking out from the tip into the cap as @SessionDrummer mentioned. On top of that the squeeze bulb is a tad loose as well. Nah, not a fan sorry. I might do what @Freddie3 does and transfer to some empty 10ml bottles I have laying around.

I don’t see the big fuss about it though. The new tip is (according to them) designed for easy drop measurement. Can’t be a bad thing, or is it?

@anon28032772 I shall fuss on Sir. It seems like they tried to redesign the wheel if you ask me. OK, let’s just LOOK at the whole “How can we make drops come out of the bottle thing”. I’ve got hundreds of flavors, most of which are in the same old, tried and true PET with needle tip bottles as many of everyone’s stash has. I’ve NEVER had an issue dropping from them, and most I can get between .01 and .02 precision, that’s about all I need, as I’m not mixing 3-5ml testers, I start at 10ml testers. So, I’ve never had an issue with dropping flavor drops out of any of my bottles, nor did I need a re-design. With my “old fashioned” bottles, I simply squeeze the bottle, and the drops come out, easy peasy, no need to touch the cap, the tip, just squeeze the bottle. On these new FLV bottles however you have to palm the bottle, and take your thumb and pointer finger, and squeeze the “bulb” which forces out drops. OK, ummmm, this is better, easier ?? Not only is it harder to do (there’s not really any learning curve here), but it’s messier, as you can and will have residual flavor on the tip, the bulb, etc., so now you have a more complicated dispersion method that’s messier. Just my .02. If it ain’t broke don’t fix it,

I don’t find them an improvement at all, zero use for them. Switched to other bottles.

I’m all for improvement but it doesn’t seem like there is any. Having mixers swap the contents for other bottles also isn’t a very ecological nor economical solution.
Maybe someone needs to tell @Flavorah

Sounds like everyone who’s tried it isn’t impressed at all.

I’m not too sure with these yet. I received several of these with my latest order. I love being able to dispense drops from the glass bottles, but something weird happened with my tips.

One bottle had a completely sealed tip, so I had to cut it before use. Another bottle of sweet coconut, did NOT have a sealed tip, and was already cut, but the bottle itself still had the unbroken seal. Unfortunately, I ASSUMED the tip was sealed, so when I shook it up for the first time, it leaked everywhere & lost about half my bottle. Plus everything just smelled of coconut for days.

It went all over my carpet, my mixing table, other bottles, and my hands!!! I couldn’t get the smell out of my hands for a couple of days.

So the idea is good, but not well executed IMO

Sounds like everyone who’s tried it isn’t impressed at all.

Yeah. That sums it all up. I haven’t had any of the new bottles but don’t like the idea of having to swap concentrates to empty bottles, having leakage, or having to screw around while mixing.

That last piece would deter me for sure. I mix every 2-3 weeks and make up 15-25 individual recipies. I could not imagine what these bottles would do to the amount of time it takes me to mix if I have extra dripage and dispensing issues.

I hate those tips… i cannot stand them at all , the worst thing about FLV are those tips

they were first cutting the tips and then stopped , you should have received a how to cut tip card with order

So long story short… if you want FLV concentrates, look for the sellers that buy bulk and use their own plastic bottles. Got it!

lol , yes you could do that , i buy direct bc they are located in the same state i live in , and they always send samples and not just one or two samples they load you up …

Well I did not receive any such card with my order. I ordered 3 flavors that came with the new bottles, and coconut was the only one that came already cut.

I ordered from Bull City, but they sell them in the original bottles.

I ordered from Bull City,